The Origin of Species comes to Australia

The Origin of Species comes to Australia

In December 2009, the National Library of Australia took possession of a rare copy of the first edition of Charles Darwin’s On the Origin of Species, published by John Murray, London, on 24 November 1859 in a limited edition run of 1,250. The copy reached Sydney by ship on 10 March 1860 and a week later it was inscribed by its new owner:

A large beautiful book bound in green cloth, its spine decorated and lettered in gilt and held in a green box, it is defined as an ‘association copy’ of On the Origin of Species, all the more outstanding in that it is lightly annotated in pencil across a hundred of its pages with the owner’s questions and commentary.

William Woolls' Inscription in On the Origin of Species by Means of Natural Selection, or the Preservation of Favoured Races in the Struggle for Life by Charles Darwin (London: John Murray, 1859, nla.cat-vn4591931; Portrait of Charles Robert Darwin, LL.D., F.R.S., 1882, nla.cat-vn2256792

The Origin is, arguably, the most significant biological work ever to be published. It stimulated a revolution in scientific thinking. Its full title, On the Origin of Species by Means of Natural Selection, or the Preservation of Favoured Race, established its span and range. Based on his research from the voyage of HMS Beagle (1831–1836), and his subsequent experiments and reading, Darwin challenged the prevailing view that the world and its natural processes were the result of divine intervention, and marshalled his argument for the progressive development of species.

Who, then, was the enquiring colonist who swiftly seized upon this new philosophical and scientific work and, with his pencilled annotations, provided evidence of the earliest informal reaction to Darwinian ideas in Australia? Born in Britain, William Woolls (1814–1893) arrived in Sydney in 1832 and was promptly appointed assistant teacher at The King’s School, Parramatta. In 1841, he established Mr Woolls Academy in Parramatta, where he educated the sons of colonists for 25 years. Acquiring a taste for botany, in 1856 he launched his writings with a series of articles in the Sydney Morning Herald on the derivation of scientific names and the promotion of local plants, and in 1860 published a paper titled ‘The Botany of the North Shore’.

Hence, William Woolls in March 1860 was a schoolmaster, educator and amateur botanical investigator. Schooled in Britain, he was also versed in the teachings of William Paley’s Natural Theology on a universe of design: ‘There cannot be design without a designer; contrivance without a contriver ... purpose without that which could intend a purpose. All imply the presence of intelligence and mind’. This was a mindset that the 49-year-old Woolls brought to On the Origin of Species as he underlined passages, placed question marks in the margins and occasionally entered a large exclamation mark. 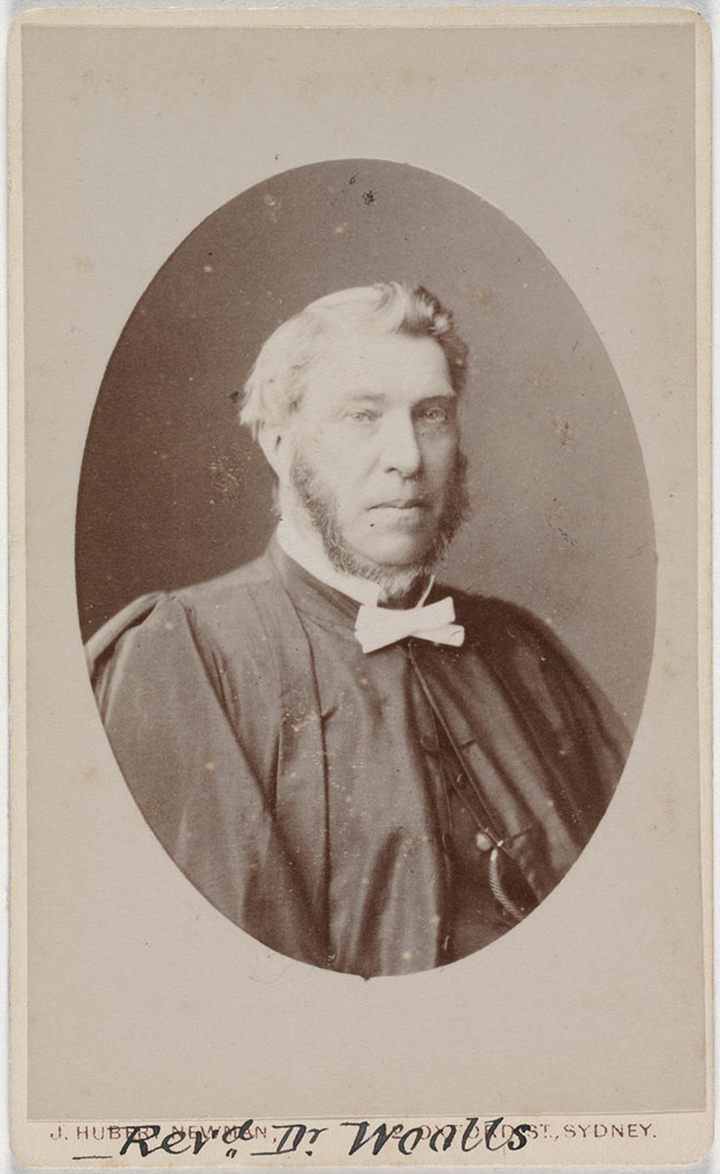 Darwin’s book spoke to his rising interest in variation in plants. But his statement about variation in species—that, despite ‘vastly different direct action of condition of life, natural selection will accumulate all variations’—elicited from Woolls an early objection: ‘All the examples’ [of environmental condition], he scribbled, ‘seem to prove to me the premise [of their influence] … all the author’s deduction to deny it’. At Darwin’s subsequent assertion that ‘Natural selection, it should never be forgotten, can act on each part of each being’, Woolls queried, ‘by what process is a part to develop by itself?’ and answered, ‘God determines’. Where Darwin suggested it was improbable that shared characters of three related species were the result of three separate acts of creation and not common descent, Woolls annotated, ‘Why not?’

Our ignorance of variation is profound. But whenever we have the means of instituting a comparison, the same laws appear to apply between varieties of the same species, and … between species of the same genus … It is the steady accumulation through natural selection, of such differences, when beneficial to the individual, that give rise to all the more important modifications of structure. 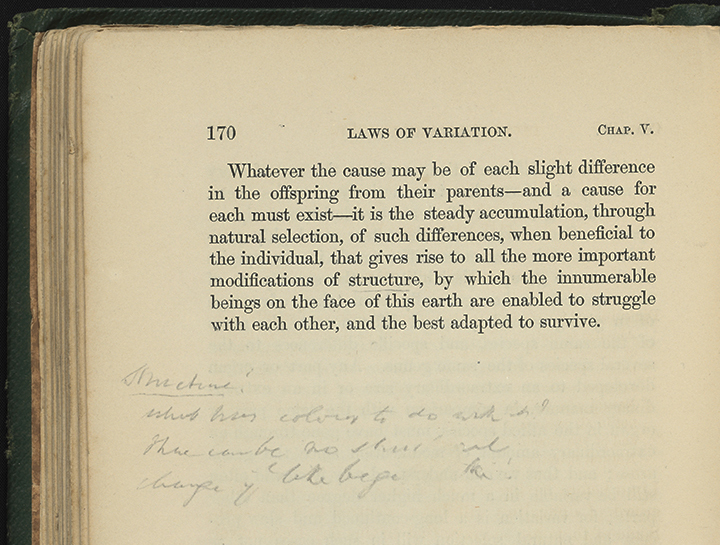 'Structures...' inscribed on page 170 in On the Origin of Species by Means of Natural Selection, or the Preservation of Favoured Races in the Struggle for Life by Charles Darwin (London: John Murray, 1859), nla.cat-vn4591931

Woolls’ interest in variation and domestication in plants is reflected in his markings, as is his resistance to Darwin’s proposition that ‘the amount of variation under nature is a strictly limited quality’. ‘Why’, Woolls questioned, ‘if man can by patience select variations, should nature fail in selecting variations?’ Against Darwin’s judgement on ‘one general law leading to the advancement of all organic beings, namely, multiply, vary, let the strongest live and the weakest die’, Woolls demanded, ‘who gave this law?’ His credulity is exercised on Darwin’s excursions into fossil evidence on the evolution of the eye, the difficulty of explaining electric organs in fish, and parasitic bees laying eggs among bees of another kind. ‘Surely’, he noted, ‘this is a design by the maker’.

We have no right to expect to find in our geological formations, an infinite number of those fine transitional forms, which on my theory assuredly have connected all the past and present species of the same group into one long and branching chain of life [where] all the species of the same genus have descended from some one species

Such judgements drew Woolls’ pencilled rebuttal. Yet their intellectual interest and impact claimed his attention. He read the volume to the end. But when, concluding, Darwin acknowledged outlooks ‘different from my own’ and looked to the future and ‘to young and rising naturalists, who will be able to view both sides of the question with impartiality’, Woolls noted cryptically, ‘No doubt’.

William Woolls appears to emerge from his contact with The Origin as a creationist committed to a belief that all things in nature were created and designed by God. In this, he stands as a typical representative of opinion in nineteenth-century Australia, where naturalists and their societies functioned within the accepted British structures and philosophical framework of science. The renowned British zoologist William Sharp Macleay, who emigrated to Sydney in 1839, regarded the widely accepted natural system of classification as ‘the plan of Creation itself, the work of an all-wise, all powerful Deity’. Rev. W.B. Clarke—a correspondent of Darwin’s on geological points and alert to the fossils of the giant marsupial Diprotodon found in Queensland—rejected the idea that recent animals were the offspring of the older forms and publicly maintained ‘that species as such were made by the Creator’. 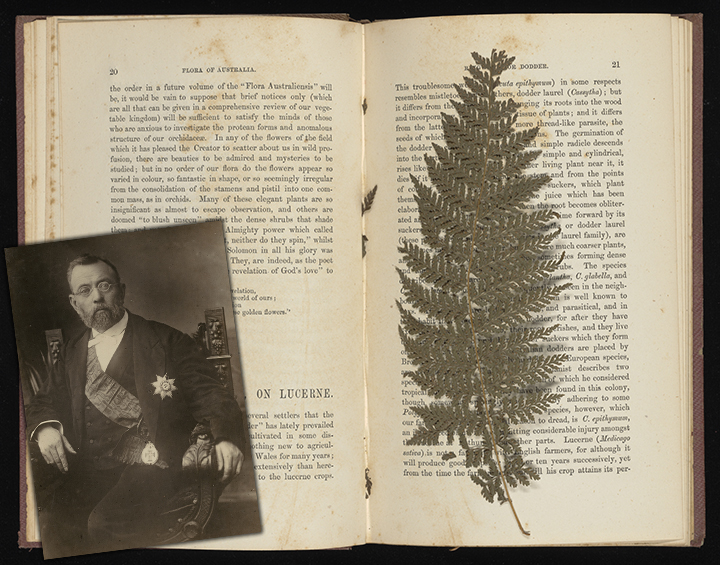 Most explicitly, Ferdinand von Mueller, the government botanist of Victoria, from his extensive explorations and collections of plants across Australia, proclaimed a resolute anti-evolutionary stance and widely declared his conviction of ‘the fixity of species’. Mueller had hoped to be invited to preparethe proposed Flora Australiensis, but that prize went to the eminent British botanist George Bentham at Kew. Writing to Bentham, Mueller opined,

I think I had in Australia more than perhaps in most parts of the globe, an opportunity to study the laws of variation of species more carefully than any other, or at least than most Botanists. And the result of investigation has invariably been that species are permanent & unalterable.

Mueller early became a mentor to Woolls, who deluged the Victorian botanist with specimens, letters, and public praise. In turn, Mueller fostered Woolls’ election as a fellow of The Linnean Society of London. Woolls became a well-recognised figure in New South Wales, lecturing to community organisations on plants, horticulture and education, and publishing his collected lectures in Contribution to the Flora of Australia (1867) and Lectures on the Vegetable Kingdom with Special Reference to the Flora of Australia (1879). With Mueller’s backing, he was awarded a PhD from the University of Göttingen in 1871 for his dissertation on the botany of the Parramatta region, and two years later took holy orders. The plant genus Woollsia and six species commemorate him. His position, however, on God’s part in the scheme of natural history never changed, his lectures and writings expressly repudiating the theory of evolution and Darwin’s philosophical advocacy. 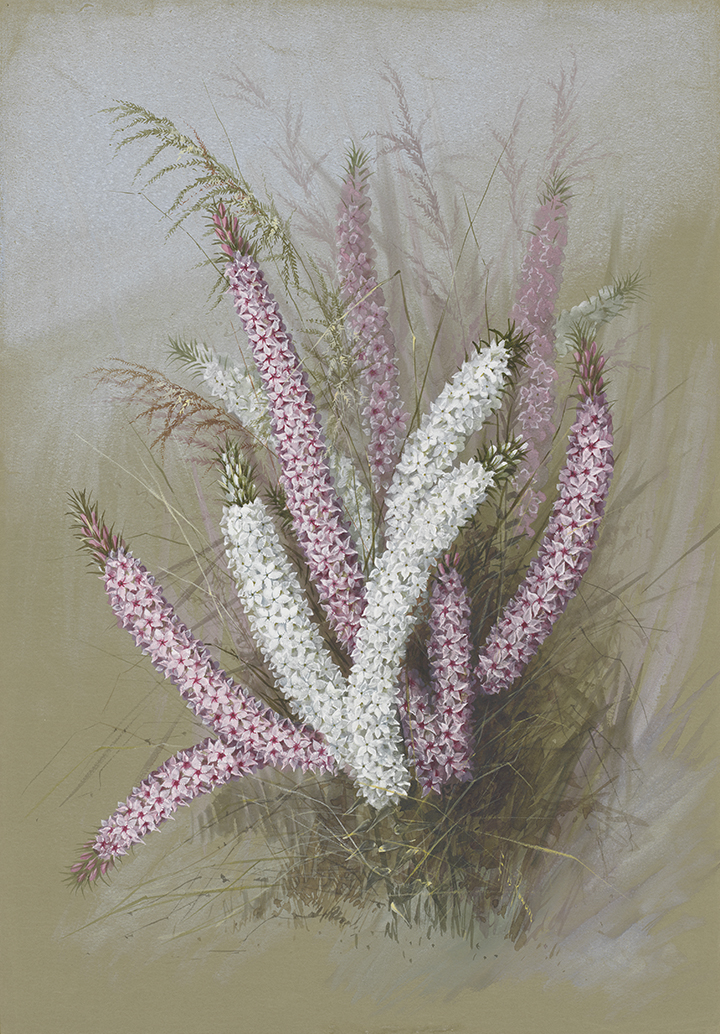 It was a view shared publicly by the founding professors in the natural and physical sciences at the universities of both Melbourne and Sydney; expressed widely by clergy across the country; and given voice in the local scientific societies. Yet in the wider community, Darwinian ideas—made accessible through mechanics’ institutes and copies of The Origin held in certain libraries—stimulated a popular taste for natural history and for the role of colonial museums. By the 1870s, Gerard Krefft—curator of the Australian Museum and another of Darwin’s correspondents—was disseminating evolutionary ideas in the Sydney press. In 1875, the deputy-surveyor and botanist Robert D. Fitzgerald dedicated the first part of his acclaimed Australian Orchids to Charles Darwin. By the last two decades of the century, new appointments at the universities brought a conspicuous brigade of pro-evolutionary thinkers to the Australian colonies.

The National Library's association copy of On The Origin of Species presents a rare documentary prelude to the long philosophical, teleological and scientific debate in Australia.

Dr Ann Moyal AM is a leading historian of Australian science.