MS 9167 - Letter, 1877 of James Dawson
Contains Djargurd Wurrong words and their english translations, chiefly words which were used for animals.

MS 7080 - Papers of Lorimer Fison, 1869-1907
Box 3, items 153-156, 157
Contains genealogical information (a family tree). Item number 157 has genealogical information relating to a man named "Toolabar", an Aboriginal leader and one of A.W. Howitt's principle informants on genealogy. You can read more about Toolabar (also known as Tulabar) on his Australian Dictionary of Biography entry.

MS 24 - Robert Gow Diary and Journal 1860-1871
P. 23
Reference to Mindi the snake "Snakes are common though I saw none - the blacks have a mythical yarn of one of gigantic size which they name "mindi" but the whites have never seen any larger than 14 or 15 feet".

MS 3343 - Letterbooks of F. A. Hagenauer, 1865-1885
Pp. 180-183
Langauge list described by author as the "language of the Western District". Understood in the North, the North west and Swan Hill but "especially at Pine Plains" (which suggests the dialect is Wergaia(S17)). Also includes a list of Aboriginal groups at Ramahyuck Mission on page 183.

MS 7080 - Papers of Lorimer Fison, 1869-1907
Box 2, Letter book VII, pp. 294-300
Notes on matrilineal descent and "class inheritance" (moeity). Aboriginal language group is unstated in text but is most likely Gunai/Kurnai as this letter is addressed to Mr Howitt, who Fison corresponded with regarding the Gunai/Kurnai language. 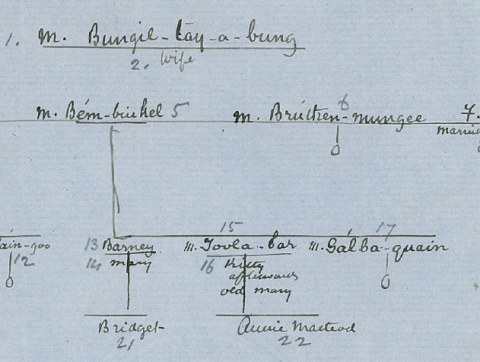 Some manuscripts contain genealogical information, such as family trees.

Check out our Video:

Can I get copies of items from the Library?