The National Library of Australia's Main Reading Room houses a collection of sculptures and paintings inspired by Indigenous stories of the Australian landscape. Since 2001, four machine-embroidered panels by British textile artist Alice Kettle have been displayed in the Main Reading Room. Kettle estimates she used 5 million stitches over a period of 18 months to create the panels. Many of the fine threads are made from synthetic rayon and cotton. They ‘capture the luminescence of the shifting light and the brilliance of the landscape’.

Three of the panels (pictured above) hang together and evoke a populated landscape, with impressionistic references to the Library’s Maps Collection. The Southern Cross is depicted at the top of the centre and left-hand panels, and the red line and text across the foreground is from a map drawn in 1570 by Abraham Ortelius (1527–1598). A fourth panel, hanging at the opposite end of the room, features a single eucalypt.

Kettle conceived the panels as a commentary on relationships between readers and libraries and between people and landscapes. The works were commissioned and given to the Library by retiring Director-General Warren Horton, in memory of his wife, Patsy Hardy. 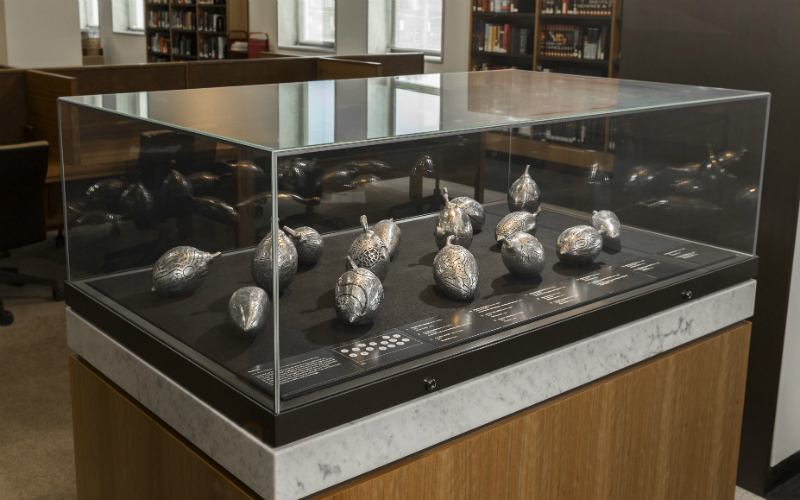 In 2013 Wesfarmers and Waringarri Aboriginal Arts brought together 15 Kimberley artists to create an original, limited-edition gift to mark the 2014 Centenary of Wesfarmers. Applying a traditional art form to the contemporary medium of cast aluminium enabled Waringarri to trial a range of new approaches to art form development and audience reach.

Inspired by the iconic boab tree and the traditional art form of boab nut engraving unique to the Kimberley region, Boab100 consists of 15 boab nuts cast in white aluminium and engraved by artists from Waringarri Aboriginal Arts. Engravings are inspired by animal totems, images of country and the patterns of nature, marking their value as significant cultural artefacts.

Waringarri Aboriginal Arts is situated in the heart of Miriwoong country at Kununurra in Western Australia’s North West, and was established in the early 1980s as the first wholly Indigenous-owned art centre in the Kimberley region. It proudly supports more than 100 artists, who draw inspiration from a rich tradition that reinforces the importance of country and culture while exploring and celebrating contemporary arts practice.

Discover more about each unique piece through our catalogue. 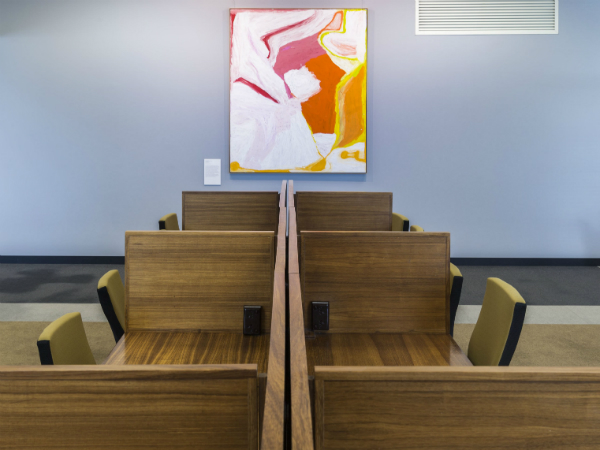 Kunawarritji by Nora Wompi was one of three works donated to the Library in 2015 to mark the 25th anniversary of the Friends of the National Library. The painting depicts the Wompi’s traditional country near the Kunawarritji community in far north Western Australia, with lineal patterns representing the tali (sand hills) that dominate the country. The circular shapes represent the scarce rock holes and waterholes dotted throughout the desert.

Nora Wompi was born in 1935 in the Great Sandy Desert at Lilparu. She lived a traditional nomadic life until her early twenties, and has travelled the Canning Stock Route between the Pilbara and the Kimberley all her life. Her art can be recognised by its beautiful pale washes of clotted creams and soft milky whites, pinks and blues, occasionally adding bold strokes of primary colour to highlight references to spirit men, spirit dogs, love magic and specific landscape forms.

The purchase of this painting was funded by Wesfarmers, and is located in the northern corner of the Main Reading Room. 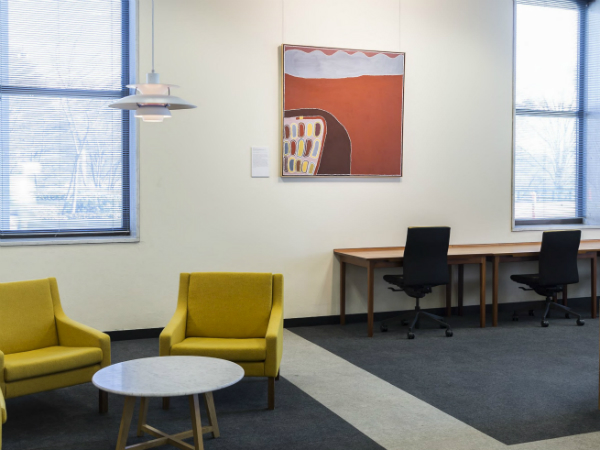 Donated by the Friends of the National Library to mark their 25th anniversary, Yab-yab-gnerni-gnim (Sugarbag Dreaming) is displayed in the Newspapers and Family History zone of the Main Reading Room. Vibrant and serene, the painting is perfectly balanced by a palette which is velvety and elegant, with natural ochres blended to produce a range of soft shades.

There are three levels of meaning in this work. Not only does it describe the sugarbag, but it is also a landscape painting. The circular shapes depict the rocky country and the Bullo River which eventually ends as a spring, shown as the smaller red and yellow shapes at the end of the river. The third interpretation is the Dreamtime story of how the plains and hills were created by two kangaroos. Arguing over honey, the kangaroos eventually divide the country into two parts, creating the stony hills country and the flat open plains.

Minnie Lumai is Mirrawong, and works in Kununurra in the East Kimberley. Her country, within the Keep River National Park, is abundant with sugarbag – a wild bush honey and wax gathered from the hives of local bees. 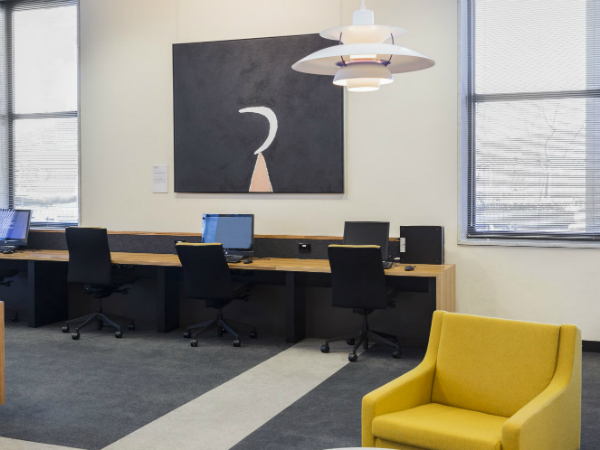 Donated to the Library by the Friends of the National Library to mark their 25th anniversary, Garnkini on the hill is displayed in the Newspapers and Family History zone of the Main Reading Room. The painting uses precious natural earth pigments, which artist Mabel Juli digs from secret places shown to her by her family.

Depicted in the painting is a hill with the moon sitting in the east and lightly resting on top, in Juli’s country. It is dramatically set against a deep charcoal-black sky, and tells a story about the moon and a star and forbidden love – that of a young man who loved his mother-in-law.

One of Australia’s most revered painters, Mabel Juli’s work is informed by stories passed on to her from her family. Born in 1932 at Five Mile near Moola Boola Station (south of Warmun), she was taken as a baby to Springvale Station, her mother’s country, and immersed in her heritage from a very early age. She is now recognised as an important law, culture and ceremonial figurehead, singer and dancer.