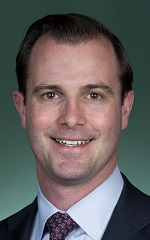 Mr Stevens was elected to the House of Representatives for Sturt, South Australia, in 2019. Prior to his election to the Parliament of Australia, Mr Stevens held a number of positions including in the wool industry and other commercial and retail enterprises, and was Chief of Staff to the Premier of South Australia from 2018 to 2019. Mr Stevens holds a Bachelor of Commerce and Masters in International Trade and Development, both from the University of Adelaide.