The Special Collections Reading Room on Level 1 houses art relating to Australian history and culture in the post-colonial era, focusing on modern Australian people and places. 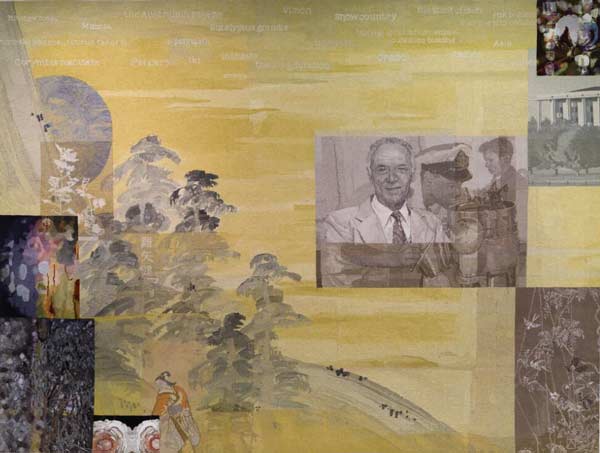 Finding Kenneth Myer was donated by the Myer family through the Tapestry Foundation of Victoria in 2011. It commemorates the life and adventures of American-born Australian patron of the arts Kenneth Baillieu Myer AC DSC (1921-1992). In 1961, Myer was a founding member of the National Library Council and, from 1974 to 1982, was Chair of Council.

At the time of his death, Myer was the greatest collector of Japanese art in Australia. His philanthropy included personal donations and funding to the National Library of Australia, Victorian Arts Centre, CSIRO and Art Gallery of New South Wales. With his siblings he established the Sidney Myer Music Bowl in 1959, in honour of their late father Sidney Myer (1878–1954).

Melbourne artist John Young designed the tapestry to represent Myer’s many interests and passions, including gum forests, oriental art and technological enterprises in fields such as optic fibre and modified crops. It also refers to his distinguished career during World War II, and his passion for collection-building by cultural institutions. At the centre left of the tapestry, Ken Myer’s name is featured in Chinese symbols, which translate as ‘rigorous dancing arrow’. 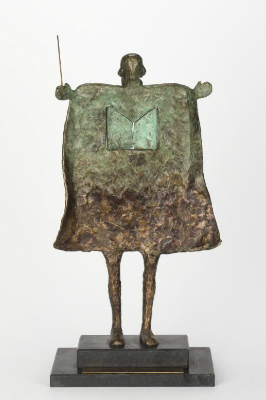 This bronze sculpture was a gift of the Peter Tahourdin bequest. The sculpture depicts a conductor on the podium with baton in hand, bringing the notated score to life through performance.

Music is represented as an ‘open book’, inviting discovery and, by inference, exploration of the Library’s collections. The Mozart hairstyle hints at Tahourdin’s own elegant, concise and refined musical style, qualities reminiscent of the composer he greatly admired.

Peter Tahourdin (1928-2009) was one of Australia’s most important contemporary composers, and a pioneer of electronic music. He created works for orchestra, opera, chamber ensemble and voice, and was an inspiring and passionate teacher, although always unassuming about his own compositions.

Born in England, Tahourdin migrated to Australia in 1964 as Visiting Composer at the University of Adelaide, moving to the University of Melbourne in 1973. He continued to compose up to his death. The National Library holds his published music and his personal archive, donated to the Library by his daughters, Julia and Sarah. 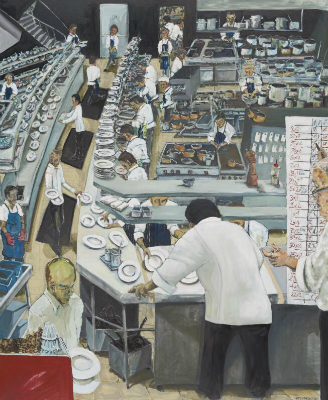 Since 2007, Australian artist and ‘visual storyteller’ Jeff Martin has been documenting the world’s most acclaimed restaurants in his Back of House series.

Tetsuya’s shows Martin’s fish-eye view of the Sydney restaurant kitchen, as overseen by the exacting Japanese-born Australian chef, Tetsuya Wakuda. Martin has painted the multi-award winning chef in the foreground, his back to the viewer, focused on the frenetic work of meal production and plating up.