Zine (derived from the word magazine), refers to a small, self-published underground publication produced for personal rather than commercial reasons. Anyone can make a zine. The self-published, alternative, and inclusive nature of zine culture gives a voice to Australian minorities, sub-cultures and creatives who are under-represented in mainstream publishing.

Zine (derived from the word magazine), refers to a small, self-published underground publication produced for personal rather than commercial reasons. Anyone can make a zine. The self-published, alternative, and inclusive nature of zine culture gives a voice to Australian minorities, sub-cultures and creatives who are under-represented in mainstream publishing.

Today, Melbourne boasts the largest tramway system on the planet!

ACAF is a three day celebration of comics and graphic novels with an Australian focus. This year it showcased Indigenous storytelling, the changing roles of women as creators and as comic book heroes, and creating a uniquely Australian narrative. The market day provided rich pickings for the National Library collection, and an opportunity to promote legal deposit  and the edeposit service. 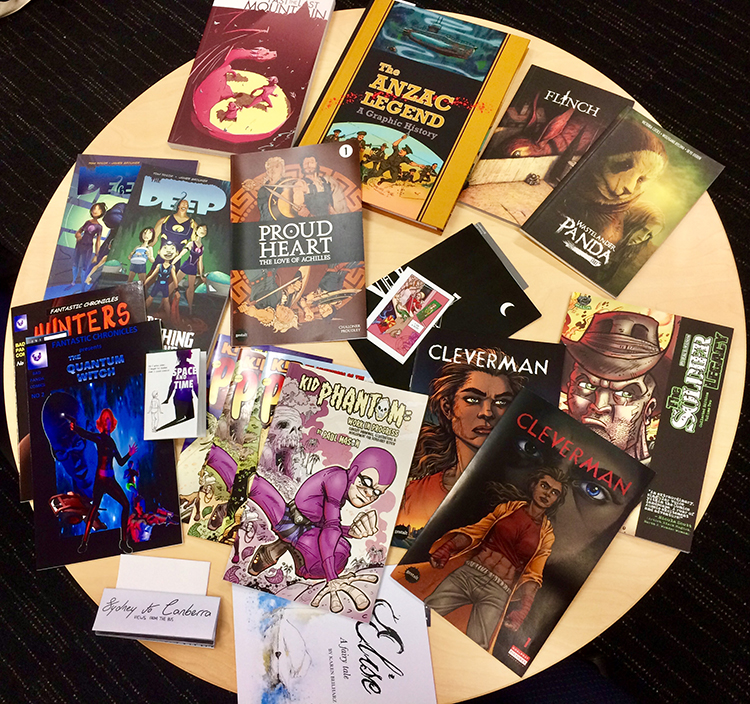 To anyone who has written a book: Congratulations! As someone who agonised over every word in this short blog post, I salute those with the inspiration and the commitment to write an entire book.

How do you get people to find and read your masterpiece?

What sells a book sells a book, same in traditional or self-publishing. You gotta shake your tail feathers

The first Cole's Funny Picture Book was issued in Australia with great fanfare on 24 December 1879 as the ‘Cheapest Child's Picture Book ever published’ and although many hundreds of thousands of copies are said to have been sold—each for single shilling—no surviving copies are recorded. Sales were unprecedented and the book was continuously in print for a century, delighting generations of Australian children and their parents.

As an employee of the National Library I am privileged to work with amazing materials that are being collected and preserved for current and future generations to appreciate and enjoy. My role in that process, as a cataloguer, is to ensure that you are able to discover those materials once they have been incorporated into our collections. What I am fortunate to see and hold in my hands, I need to describe in a meaningful way that also complies with our cataloguing rules. Of course, I also have a great deal of fun too, particularly with zines!

Rare, beautiful, historically significant or unusual works can be an inspiration and a joy to behold. However they are often either locked away in the hands of collectors or, if held by a public institution, might be so fragile they can seldom be displayed or loaned for exhibition and definitely not handled by the public. Digitisation has enabled images of some iconic illuminated manuscripts and other treasures of the bibliographic world to be made available for viewing online.

Was this an attempt to cope with those hot summer days in Victoria? A case of trying mind over matter in the days before deodorants? Although the name conjures up wonderful images of bowler hatted gentlemen in dark suits steadfastly remaining cool, calm and collected, or ladies in their long sleeves and many petticoats attempting not to “glow”, the League had a very serious purpose, and in one sense it was about perspiration.