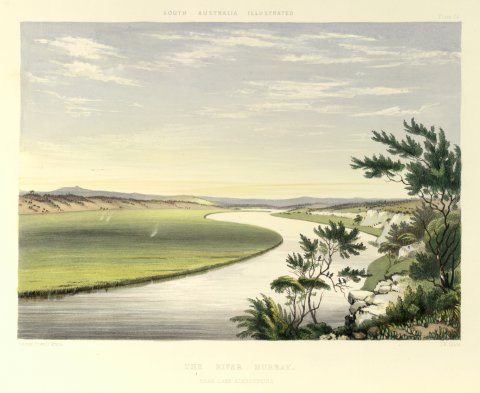 He travelled widely in New Zealand and in 1845 held exhibitions in Adelaide and Sydney. He also visited the Illawarra region before returning to England in 1846. In 1847 he produced two folios of hand-coloured lithographs: South Australia Illustrated and The New Zealanders Illustrated. He also published Savage life and scenes in Australia and New Zealand, which gave an account of his travels. A journey to South Africa in 1848 resulted in a third folio of lithographs, The Kafirs Illustrated. 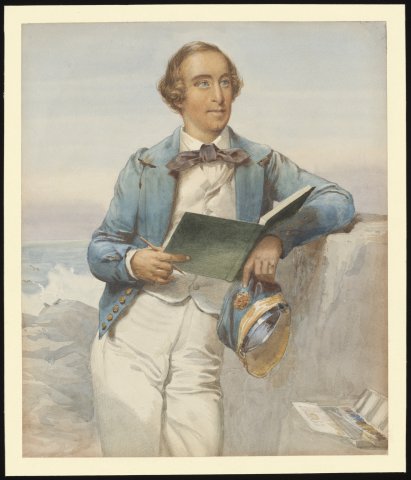 In 1850 Angas and his wife emigrated to South Australia, where his father had settled two years earlier. He opened a studio in Adelaide. He travelled to the goldfields near Bathurst and in 1851 published two volumes of lithographs of the goldfields of New South Wales and Victoria. In 1853 he was appointed secretary of the Australian Museum in Sydney, where he acquired a considerable knowledge of conchology. He returned to South Australia in 1860 and was chairman of the district council of Angaston in the Barossa Valley. In 1863 he and his family returned to England and he lived in London for the rest of his life. In his later years his main interest was natural history rather than art and he was an active member of the Zoological Society and the Linnean Society.

Angas wrote in 1847 that he was ‘actuated by an ardent admiration of the grandeur and loveliness of Nature in her wildest aspect’. In his books on the young colonies of South Australia and New Zealand, he sought to record the conjunction of civilized and savage life. Bernard Smith has written that the paintings of Angas were important in three respects. ‘They became ethnographical documents of considerable value. The landscapes were used to illustrate the nature of the country awaiting settlement in the new colonies and so to promote migration. Finally Angas, trained under a natural-history painter himself, included many drawings, in his exhibitions and books, of value mainly to the natural historian’.

Both the Nan Kivell Collection, purchased in 1959, and the Ferguson Collection, purchased in 1970, included watercolours and drawings by George French Angas. Most of the original works by Angas in the Library’s collection, including manuscripts and five sketchbooks, were acquired from José Calvo of Viña del Mar, Chile, in 1973. Calvo’s wife Patricia was the great granddaughter of Angas.

The Library holds five sketchbooks, 45 watercolours and about 155 wash, pen and wash, pencil and wash, and pencil drawings by George French Angas. The earliest work is a view of Dawlish, England (1835), drawn by Angas when he was about 12, and the latest are a series of drawings of the River Murray which he made for the journal Colonies and India in 1877.

Two of the sketchbooks of Angas contain, in addition to figure studies, pencil drawings of Australian and New Zealand subjects in 1844-45. They include the Coorong and Lake Bonney in South Australia and Port Nicholson, the Bay of Islands, Mount Egmont, Te Aro Pa and Maoris in New Zealand. About 80 of the individual watercolours also depict Australian scenes and subjects. The South Australian subjects include the Aboriginal peoples of Encounter Bay, sheep stations, views of the Morialta Falls, Gawler, Lyndoch, Rivoli Bay, Port Lincoln, Lake Albert, Kangaroo Island and the Bank of South Australia in Adelaide. There are a few pencil drawings of the Mount Alexander (Castlemaine) diggings in Victoria and views of the Blue Mountains, Bathurst, the Hunter River, Newcastle, Kiama, Dapto and the Illawarra in New South Wales. Sydney scenes include the funeral of Sir Everard Home (1853), Petty’s Hotel, Wooloomooloo, Double Bay, Darling Point, Botany Bay and Sydney Harbour. One of the most engaging of the Australian drawings is entitled ‘The Young Cricketer’. In addition to the works that Angas sketched in Australia in 1844-45 and 1850-62, there are several later drawings of central and northern Australia which he produced for the published accounts of explorations by John McDouall Stuart (1864) and John Forrest (1875).

Another sketchbook contains 64 studies for The Kafirs illustrated (1849). In addition, there are about 40 works painted or drawn in the Cape Colony and Natal in 1847, including Cape Town, Table Mountain, Umvoti and Umnonoti rivers in Natal, Zulu men and women, and kraals.

Other works by Angas in the collection document his travels in Britain and Europe. There is a sketchbook containing drawings of Malta and Sicily (1841), as well as drawings of Constantinople and Scutari (1848), Jersey (1864), Ireland (1871), and English churches and castles.

The Library holds a large number of engravings and lithographs after works by Angas, some of them printed by Angas himself. Many of them were taken from his books, or from illustrated newspapers, while some were issued as series, such as the 17 prints entitled Down the Murray from its source to the sea (1877). There is also a lithograph portrait of Angas from a painting by Charles Baugniet (1848). In addition, the Library holds a bronze medal awarded to Angas at the Exposition universelle de Paris in 1855.

The Library holds three commonplace books written and illustrated by Angas when he was a schoolboy. One is headed ‘The British possessions and United States of North America’ and contains drawings and coloured maps of the United States and various English counties. The others are headed ‘The Victoria, Tavistock’ and are accompanied by a prospectus and list of subscribers to a monthly of that name which was to be issued in 1837. In addition, there are manuscripts, with pencil drawings, of articles intended for the journal The Colonies and India in 1877. They are entitled ‘Down the Murray from its sources to the sea’, ‘From Plymouth to Sydney’ and ‘South Africa – round about Cape Town’.

The following are the principal published works by Angas:

The manuscripts are held in the Manuscripts Collection at MS 3934 (2 folders). They have been catalogued at the collection level. They are also available on microfilm (reel G 23042). The books are housed in the Australian Collection at various locations.

Smith, Bernard, European vision and the South Pacific 1768-1850; a study in the history of art and ideas, Oxford, Clarendon Press, 1960