A Queensland surveyor, C.E. Borchgrevink, claimed to be the first man to land on the Antarctic continent. He had joined a Norwegian whaling expedition which in January 1895 landed at Cape Adare. Four years later a Tasmanian meteorologist, Louis Bernacchi, was in the first party to spend a winter on the continent.

Bernacchi was later a member of the 1901-4 British National Antarctic Expedition, led by Captain Robert Scott. Australians took part in the three subsequent British expeditions. The geologists Edgeworth David and Douglas Mawson were members of the 1907-9 expedition led by Ernest Shackleton and they were the first to climb Mount Erebus in 1908. Two other Australian geologists, T. Griffith Taylor and Frank Debenham, were on the ill-fated expedition led by Scott in 1910-12 and they made a detailed survey of the western shore of the Ross Sea. The photographer Frank Hurley was one of several Australians on Shackleton’s Trans-Antarctic expedition in 1914-17. Captain J.K. Davis commanded the Aurora which rescued the survivors at Cape Evans in 1917.

Mawson organised and led the 1911-14 Australasian Antarctic Expedition, with Davis as his deputy. He established a meteorological station at Macquarie Island and the main base at Cape Denison on Commonwealth Bay. The geologist C.T. Madigan led an eastern sledging party which collected significant data on ice and discovered a coal-bearing rock formation. Mawson himself led a southern sledging party. His two companions perished and he alone struggled back to the base camp. In 1928-29 the Australian aviator Hubert Wilkins, who had already explored Arctic regions by air, made the first aerial surveys of the Antarctic. He later made a further four expeditions to the Antarctic. In 1929 Mawson returned to the Antarctic as leader of the British Australian New Zealand Antarctic Research Expedition. Based on the ship Discovery, and using small aircraft, the expedition surveyed 1500 miles of coastline and many islands. It established the existence of an Antarctic continent, as distinct from island masses linked by the ice cap.

Apart from books, reports and some hydrographic charts, the first Antarctic records acquired by the Library were papers of Thomas Vere Hodgson, a member of the 1901-4 British Antarctic Expedition. They were donated by his family in 1937. Thomas Griffith Taylor presented many of his papers and books in 1954-55 and further papers were received from his widow in 1963. The photographs and papers of Frank Hurley were purchased from his family in 1963-66. The papers and photographs of Douglas Mawson were purchased from the London book dealer, Francis Edwards, in 1980. The papers of John Béchervaise were purchased from him in 1989 and further papers were received from his executor in 1998. Phillip Law donated his papers in 1998-2003.

Diaries kept by Arthur Scholes on the ANARE expedition to Heard Island, 1947-51

Papers of Thomas Vere Hodgson, a member of the 1901-4 British National Antarctic Expedition. They include notebooks, diaries, correspondence, photographs and typescript articles on Antarctic subjects.

Records of the Australian National Research Council, including minutes and papers of its Antarctic Committee (1927-35) and papers on an Antarctic expedition (1947).

Papers of Thomas Griffith Taylor, the senior geologist on the British Antarctic Expedition in 1910-13. Housed in 56 boxes, they include a diary, sledging diaries, correspondence, letterbooks, manuscripts of articles, papers on glacial studies, and books.

Diaries and papers of John Hunter, chief biologist on the Australasian Antarctic Expedition, 1911-14.

Papers and photographs of John C. Whiting, a pilot who undertook survey flights in Antarctica in 1965.

Papers of Sir Douglas Mawson, mostly relating to Macquarie Island. They include diaries and logs (1912-13) and a report by Mawson on the island’s soils (1915). There are also logs kept on the Discovery (1930-31).

Papers of John Béchervaise, leader of three ANARE expeditions to Heard Island and Mawson (1953-60). A very extensive archive (78 boxes), they include extremely detailed diaries and daybooks, correspondence, photographs, poetry and research papers and drafts of his biography of John Rymill.

Diary and scrapbooks kept by Robert Summers, a medical officer on the ANARE expedition to Mawson in 1954.

A diary and papers of Sydney Evan Jones, a medical officer on the Australasian Antarctic Expedition, 1911-14

Diaries of Leslie Gibbney, a biologist on the 1950 and 1952 ANARE expeditions to Heard Island.

Diaries and scrapbooks of Fred Elliott, a weather observer on ANARE expeditions to Heard Island and Mawson, 1953-58

Papers of D.A. (Duncan Alexander) Brown, a member of the ANARE expeditions to Macquarie Island (1956), Mawson Station (1958) and Davis Station (1961). They include a diary of a traverse south of Mawson, personal messages, newsletters, photographs and slides.

Papers of P.G. Law, senior scientific officer (1947-48) and leader of 23 ANARE expeditions to the Antarctic and sub-Antarctic (1949-66). They are the largest of the Antarctic collections (105 boxes). They include voyage diaries, personal documents, correspondence, reports, navigational records, meteorological records, manuscripts of books and articles, press cuttings, scrapbooks and publications.

Papers of Elizabeth Chipman documenting her work in the Antarctic Division, her three visits to Macquarie Island (1967-75), and her research on Australians in the Antarctic.

The earliest Australian maps of Antarctica in the collection are photographic copies of manuscript maps in the Mawson Collection and a glass slide of a map showing the first and third years’ tracks of the Australasian Antarctic Expedition (1911-14). In 1913 the Royal Geographical Society published a preliminary chart of soundings made by the Aurora in 1912-13 and in 1914 it issued three maps showing the routes of the Australasian sledging parties. The collection contains two maps recording the explorations of Hubert Wilkins in the Antarctic in 1928-29. There are photographic copies and tracings of maps compiled by the British, Australian and New Zealand Antarctic Research Expedition led by Mawson in 1929-31, as well as two charts published by the Royal Geographical Society in 1932. In 1938 the Society issued a map of Graham Land based on the surveys of the expedition led by the Australian John Rymill. The first official map of the Australian Antarctic Territories was published by the Department of Interior in 1939; the Library has copies as well as a volume entitled ‘Progress sheets’. 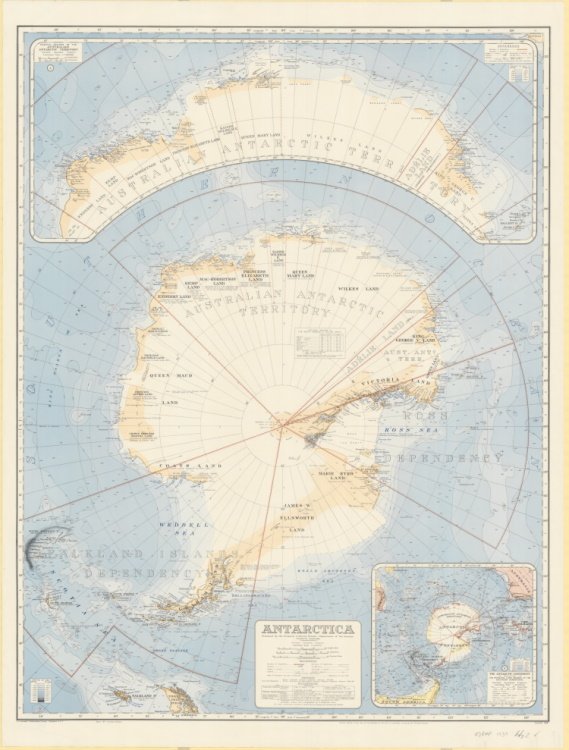 The Mawson Collection purchased in 1980 contains 473 photographs, of which about 400 relate to the Antarctic. They mainly date from 1911-14 and were taken by Frank Hurley, Douglas Mawson, Frank Wild and other members of the expedition. They depict the Aurora, Macquarie Island, Cape Barne, Cape Denison, Mertz Glacier, Beardmore Glacier, penguins, sea elephants, marine life, plants, geological samples, and ice formations. There are also many photographs of huts and men working or relaxing. A smaller collection relating to the same expedition formed part of the archive of John G. Hunter. It consists of 36 lantern slides created by Frank Hurley from photographs taken by Hurley, L.R. Blake, H. Hamilton and Mawson.

Another outstanding photographer, Herbert Ponting, was a member of the 1910-13 British Antarctic Expedition led by Captain Robert Scott. The Library holds 35 of his photographs depicting the icebound Terra Nova, penguins and pack ice, seals, blizzards, icebergs and Mount Erebus. Another early item is an album of photographs taken on the Nimrod expedition led by Ernest Shackleton in 1907-9.

The papers of the biologist George W. Rayner included 16 photographs taken on board Discovery II when it sailed in Antarctic waters in 1931. There are also photographs documenting the work of various ANARE expeditions. For instance, a collection is held of 45 photographs taken at Heard Island in 1947-48.

(i) Writings by Australian Explorers and Scientists

Béchervaise, John, Blizzard and fire: a year at Mawson, Antarctica, 1963

Debenham, Frank, The quiet land: the diaries of Frank Debenham, member of the British Antarctic Expedition 1910-1913, edited by June Debenham Back, 1992

Hurley, Frank, Shackleton’s argonauts: a saga of the Antarctic ice-packs, 1948

Taylor, Thomas Griffith, Journeyman Taylor: the education of a scientist, 1958

Béchervaise, John, Arctic and Antarctic: the will and the way of John Riddoch Rymill, 1995

Chipman, Elizabeth, Women on the ice: a history of women in the far south, 1986

Debenham, Frank, Antarctica: the story of a continent, 1959

Fitzsimons, Peter, Mawson and the ice men of the heroic age: Scott, Shackleton and Amundsen, 2011

Hall, Lincoln, Douglas Mawson: the life of an explorer, 2000

McEwin, Emma, The many lives of Douglas Mawson, 2018

Murray-Smith, Stephen, Sitting on penguins: Australia and the Antarctic, 1988

Ralston, Kathleen, A man for Antarctica: the early life of Phillip Law, 1993

The various collections of personal papers are held in the Manuscript Collection. Finding-aids for the papers of Frank Hurley and Thomas Griffith Taylor are available on-line at https://nla.gov.au/nla.obj-223125568/findingaid (Hurley) and https://nla.gov.au/nla.obj-695778504/findingaid (Taylor). The finding-aid for the papers of Phillip Law was compiled by the Australian Science and Technology Heritage Centre and is available at http://www.austehc.unimelb.edu.au/guides/lawp/LAWP.htm