John Flynn (1880-1951) was born at Moliagul, Victoria, and was educated at government primary schools and the University High School in Melbourne. He became a pupil-teacher in the Education Department and developed a strong interest in photography. In 1903 he became a home missionary of the Presbyterian Church and served at Beech Forest in the Otway Ranges and Buchan in Gippsland. In 1907 he began studies at the Presbyterian Theological Hall in Melbourne and he was ordained as a minister in Adelaide in 1911. In the same year he joined the Smith of Dunesk Mission in the Flinders Ranges in South Australia. In 1912 he compiled a detailed report on the spiritual condition of the people, both Indigenous and European, of the Northern Territory and Central Australia. The General Assembly of Australia responded by establishing the Australian Inland Mission, with Flynn as Superintendent.

The Australian Inland Mission, which was responsible for the Northern Territory and the remote parts of South Australia, Western Australia and Queensland, began with one padre (Bruce Plowman), a nursing sister and a nursing hostel at Oodnadatta. In 1913 Flynn launched the illustrated magazine The Inlander. By 1918 he had established patrols at Oodnadatta, Port Hedland, Broome, Pine Creek and Cloncurry and nursing sisters at Oodnadatta, Port Hedland, Halls Creek, Maranboy and Alice Springs. In 1926 he persuaded Alfred Traeger to come to Alice Springs and develop the pedal radio. A radio station was installed at the Presbyterian Church at Cloncurry and pedal sets placed at homesteads and missions. In 1929 the Aerial Medical Service was established, operating from Cloncurry, and it was an instant success. It was transferred to the Australian Aerial Medical Service (later the Flying Doctor Service) in 1933.

In 1933 Flynn was made an Officer of the British Empire (OBE) and he was Moderator-General of the Presbyterian Church in 1939-42. He remained Superintendent of the AIM and in his last years he established a retirement home in Alice Springs and a holiday camp for Outback children in Adelaide. Following Flynn’s death in 1951, Fred McKay, who had been a patrol padre in the 1930s, was appointed Superintendent. Under his leadership, the AIM became a very large organisation, its influence extending to the new mining regions in the far north and west and even to Papua New Guinea. The John Flynn Memorial Church was opened in Alice Springs in 1956. McKay retired in 1974 and was succeeded by Max Griffiths.

In 1977 the Presbyterian Church divided, with the majority of churches joining the Uniting Church of Australia. All the AIM properties were awarded to the Uniting Church, but after some fraught negotiations the two churches agreed that the name ‘Australian Inland Mission’ would no longer be used. The Uniting Church adopted the name ‘Frontier Services’ for its range of Outback ministries.

In 1964, at the suggestion of Sir John Ferguson, Jean Flynn presented to the Library the papers of her husband, the Reverend John Flynn. In 1977 the Board of Frontier Services of the Uniting Church of Australia donated an extensive archive of the Australian Inland Mission. Numerous additions were made to the archive between 1983 and 2001, more than doubling it in size. The Library had a long and happy association with the second Superintendent of the AIM, the Reverend Fred McKay and his wife Margaret. They made many visits to the Library between 1982 and 1991 and compiled the listings that cover the bulk of the archive. The personal papers of Fred McKay were presented by his family in 2001.

The papers of Dr George Simpson, one of the founders of the Flying Doctor Service, were donated by his wife Nesta Simpson in 1962. In 1967 R. Cameron Plowman presented the papers of his father, R.B. Plowman, the first AIM padre.

Extending from 1912 to 1996, the records of the AIM and its successor organisation form one of the largest archives held in the Library. The records of the very early years are somewhat scanty, but from the 1930s onwards they are comprehensive. They document the multifarious activities of the AIM and are the most important single source on the Australian Outback held in the Library.

Papers of George Simpson, medical adviser to the AIM (1927) and one of the founders of the Aerial Medical Service. Occupying ten boxes, they consist of correspondence (1928-58), including correspondence with the AIM, diaries (1929-32), subject files, records of the Flying Doctor Service, speeches, notes and printed items.

Papers of Bruce Plowman, the first AIM padre, including letters (1912-17), mainly to his mother and his wife, a typescript journal (1914), and literary manuscripts.

Personal and official papers of Rev. John Flynn, the first Superintendent of the AIM. Filed in 22 boxes, they consist of his letters to his father (1901-28), correspondence (1898-1956), sermons, manuscripts, diaries (1912-41), personal and family documents, AIM correspondence, minutes and reports, Aerial Medical Service correspondence and reports, photographs, maps, publications, and letters of condolence on his death.

Papers of James Spaulding, who served with the Aerial Medical Service in 1929-30, consisting of letters to his wife, speeches, articles, and notes for talks on the AIM.

Papers of Rev. Fred McKay, who was a patrol padre (1935-41) and the second Superintendent of the AIM (1951-74). Occupying 85 boxes, they extend from 1922 to 1998 and include correspondence, reports, official papers, sermons, lectures, newspaper cuttings, photographs, slides and publications. There are extensive papers on the Presbyterian Church, the Australian Inland Mission, the Royal Flying Doctor Service, Church union and on individuals such as John Flynn, Alf Traeger and Sir Robert Menzies.

Papers of Rev. Arch Grant mainly relating to his biography of Kingsley Partridge.

Correspondence, photographs and a short biography of Jean Mittelheuser, the nursing sister in charge of the AIM hospital at Maranboy in 1920-22.

Diaries (1964, 1969) of Rev. Andrew McKay (the brother of Fred McKay) kept while he was a patrol padre based at Birdsville.

A small collection of 19 maps on 21 sheets was received with the Australian Inland Mission archives. Mostly undated, they include the Inlander Map of Australia (1922), the AIM Jubilee Map (1962), maps of AIM patrols, a Flying Doctor Service base chart, pastoral maps of South Australia and western Australia, and maps of the Northern Territory and Queensland. 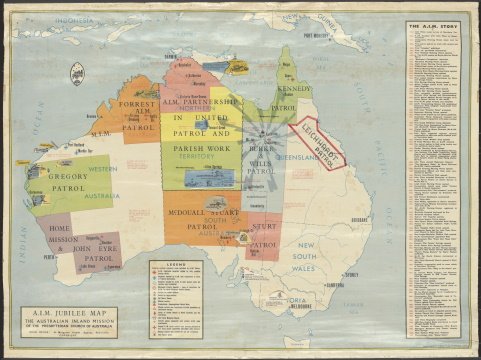 The Library holds 18 objects that were received with the AIM archives. They mostly consist of radio equipment, including portable transceivers, an automatic Morse keyboard invented by Alf Traeger, sets of pedals, and cassettes used in portable transceivers. There are also projectors used by padres and a Flying Doctor Service tin medicine chest.

A substantial collection of photographs was received with the AIM archives. They include about 4400 glass slides, glass negatives and lantern slides, mostly dating from 1912 to 1955. About half were taken by John Flynn, the earliest being photographs of Buchan and the Otway Ranges (1906-7). Many of the slides were used by Flynn and others in lectures. The subjects include portraits, indigenous families, patrols, missions, churches, hospitals, hostels, schools, aircraft, radio equipment, homesteads, camp sites, towns, roads, railway lines, cattle stations, mining settlements, teamsters, pearl luggers, prospectors, hawkers, fettlers and landscapes. Among the places depicted in the photographs are Alice Springs, Beltana, Broome, Carnarvon, Darwin, Dunbar, Innamincka, the Kimberleys, Marble Bar, Mornington Island, Oodnadatta, Port Hedland, Tennant Creek, Thursday Island and Victoria River Downs.

In addition to the quarterly magazine The Inlander (1913-86), the Library holds many published reports, booklets and leaflets of the AIM. The following books deal with the lives of John Flynn and Fred McKay and the history of the AIM:

Grant, Arch, Palmerston to Darwin: 75 years service on the frontier, 1990

Griffiths, Max, The silent heart: Flynn of the Inland, 1993

Griffiths, Max, Straight from the heart: tales of tragedy and triumph from the nurses of the Australian outback, 2000

Henry, Mona, From city to the sandhills of Birdsville, 1994

McKay, Fred, Traeger: the pedal radio man: he gave a voice to the bush and to flying doctors, 1995

McKenzie, Maisie, Fred McKay: successor to Flynn of the inland, 1990

John Flynn Place at Cloncurry, Queensland, has a permanent exhibition of artifacts of Fred McKay, mostly relating to the Flying Doctor Service.