Henry Otley Beyer (1883–1966) was born in Edgewood, Iowa, and was a graduate of Denver University, where he studied chemistry. In 1905 he arrived in the Philippines and, while working as a teacher, studied the Ifugaos of the Banaue Valley of northern Luzon. In 1908–09 he carried out research in Asia, North Africa and Europe and undertook graduate studies in anthropology at Harvard University. In 1909 he returned to the Philippines and was appointed ethnologist in the Bureau of Science. He carried out fieldwork among the Ifugaos, Igorots, Apayaos, Kalingas and other peoples. In 1914 he joined the staff of the University of the Philippines and set up the Department of Anthropology. He became Professor of Anthropology in 1924 and held the position until his retirement in 1954. He continued to live in the Philippines until his death.

Beyer was the pioneer of anthropology in the Philippines and also made major contributions in the fields of folklore, customary law, archaeology, art and geology. Among his many publications were the Philippine ethnographic series (141 vols, 1912–22), Philippine tektites (1933–34) and Philippine folktales, beliefs, popular customs and traditions (3 vols, 1941–43).

The Otley Beyer Collection was purchased in 1972 from William Beyer, the son of Beyer.

The Otley Beyer Collection contains about 1800 books and 2000 pamphlets written in English, Spanish, French, German and Dutch. The subject matter is very broad and includes dictionaries, encyclopaedias, bibliographies, government publications, censuses, technical reports, novels, novenas and other devotional works, and books on archaeology, anthropology, history, literature, folklore, voyages, travel, politics, foreign relations, law, immigration, medicine, geology, the Catholic Church and Buddhism. While many works were published in or relate to the Philippines, there are also books dealing with the United States, China, Japan, India, Malaya and the East Indies.

In addition to the publications in European languages, there are about 600 volumes in Japanese, Chinese, Thai, Tagalog and other Asian languages. The great majority of these works are in Japanese and they were mostly published during the Japanese occupation of the Philippines (1942–45). They deal particularly with Japan’s role in South-East Asia, the Greater East Asia Co-prosperity Sphere, Japanese nationalism, military campaigns and the Japanese economy. There are a number of edicts and other documents issued by the Japanese Army in the Philippines. Other subjects include the Philippine constitution and laws, Philippine languages, the economies of China, India and South-East Asia, and foreign relations.

At the core of the Otley Beyer Collection are 195 volumes of typescripts compiled by Beyer and his associates, mostly in the period 1912–30, on the ethnography of the Philippines. They provide a valuable record of Philippine life in the early twentieth century, before US influences became pervasive. The most substantial series are Bisaya ethnography, the Ifugao people, Ilokos ethnography, Moro ethnography, Philippine customary law and Tagalog ethnography. There are also volumes on archaeological surveys in Rizal Province and Philippine tektites.

In addition to the bound volumes, there are drafts of Beyer’s books, articles and addresses and a huge quantity of manuscripts, theses and published papers by students and colleagues.

The Otley Beyer Collection contains about 140 printed and manuscript maps. They date from 1894 to 1963 and include copies of a few older maps. They mostly relate to the Philippines and comprise maps issued by the United States Army Map Service (1944–52), provincial maps, road maps, development plans, ethnographic maps, language maps, geological maps and maps of tektite sites. A map of the archaeological survey in Rizal Province was made by Beyer in 1929. There are also a number of maps of Indo-China, Malaya, Indonesia and other Asian countries. 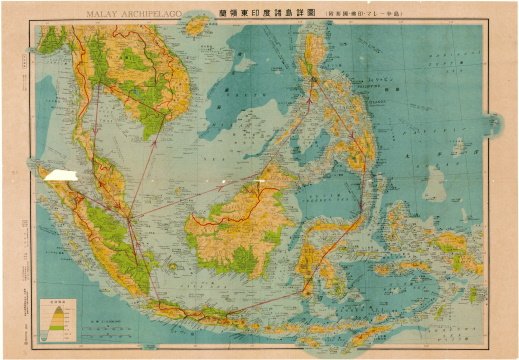 The collection contains hundreds of photographs, most of them small and unidentified. There are a large number of photographs of archaeological excavations, weapons, tools, pottery, ceramics and sherds. Others depict temples, old forts, houses, villages, street scenes and landscapes, as well as Ifugao villagers, wedding and funeral ceremonies, dances and parades. There are also group photographs of students and academic staff.

The books and pamphlets in Western languages in the Otley Beyer Collection are kept together in the Asian Collections. They have been catalogued individually and the call numbers have the prefixes BEY and BEY pam. The serials, newspapers and books in Japanese and other Asian languages have been catalogued and mostly integrated in the general and Asian collections, although a number have been retained as a collection.

Apart from some maps filed with the manuscripts, the maps are held together as a formed collection within the Maps Collection. The maps have been described in a finding aid and digitised: https://nla.gov.au/nla.obj-579978728/findingaid.

Some photographs are among the personal papers, but the bulk of them are held in the Pictures Collection at P1030 LOC Q40-Q42.  They have not been catalogued. Most of them have been placed in envelopes which contain brief caption.