The forebears of José Maria Braga left Portugal in 1712 and settled in the colony of Macau. Two of his great-grandfathers moved to Hong Kong when the colony was established in 1842. His father José Pedro Braga (1871–1944) was a businessman, journalist and the first Portuguese member of the Hong Kong Legislative Council. José Maria Braga (1897–1988) was born in Hong Kong and educated at St Joseph’s College. In 1913 he joined the staff of the Hong Kong & Shanghai Banking Corporation. In 1922 he moved to Macau, where he taught for 13 years at St Joseph’s Seminary and later at the Liceu de Macau. He played a major part in establishing in 1925 the first Macau daily newspaper, Diario de Macau. He was the Reuters representative in Macau (1932–45) and the English language editor of the Macao review (1929–30), as well as being a contributor to other papers such as A Patria, a voz de Macao and Macao tribune. From 1936 to 1946 he was the general manager of the Macao Water Company. In 1946 he returned to Hong Kong where he established an import–export business, Braga & Co., mainly dealing with the United States and Thailand.

Soon after moving to Macau in 1922, Braga set about collecting and recording the history of the colony since the Portuguese arrival in the sixteenth century. He built up a large library and created a series of files and chronological lists of officials, missionaries and events. He wrote numerous short historical articles, in both English and Portuguese, mainly for local newspapers and in 1937 began to collaborate with the English soldier and historian C.R. Boxer. From 1941 to 1945 he collected intensively the printed record of wartime Macau and Hong Kong. After the War, he moved away from journalism and wrote several scholarly papers, notably The beginnings of printing in Macao (1963). He also compiled extensive bibliographies for the Hong Kong annual report. His passion for collecting and historical scholarship increasingly overshadowed his business activities. In 1952 he visited Portugal and secured transcripts of many manuscripts, notably the ‘Jesuitas na Asia’ manuscripts in the Ajuda Library. He also extended his collecting to the history of British colonisation and influence in the Far East.

In 1966 Braga left Hong Kong and pursued his business interests in New York, but without success. Some of his children were living in Australia and in 1968 he decided to be re-united with his collection in Canberra. In 1972 he and his wife joined their daughter in San Francisco, where they spent the rest of their lives.

The Braga Collection was purchased from Braga in 1966. Braga held a fellowship at the Library from 1968 to 1971. Before his departure, he donated further books, manuscripts, pictorial works and personal papers.

While the bulk of the collection dates from the second half of the nineteenth century and the first half of the twentieth century, there are about 50 pre-1800 titles, with the earliest dating from 1489. The following are some of the rarer works and more substantial series in the collection:

During World War II, Braga was assiduous in collecting books, periodicals, runs of newspapers, newspaper cuttings and correspondence relating to the War in the Far East. Among other subjects, they document the operations of Allied secret service agencies, the treatment of military prisoners and civilian internees, Allied and Axis propaganda, relief for and rehabilitation of Macau and Hong Kong, and the trials of war criminals.

The collection contains a large number of periodical and newspaper titles. While most of them are represented by only a few issues, there are lengthy runs of:

Possibly the rarest periodical in the collection is the Hong Kong Fellowship Newsletter, circulated to relatives in Britain of prisoners in Japanese camps in World War II.

The Braga Collection contains 198 manuscripts or groups of manuscripts. Most of them are not original, but are handwritten or typescript copies of books, pamphlets, articles, lectures, official documents and letters. In particular, there are copies of many documents of Portuguese missions in Asia dating from the sixteenth to the eighteenth centuries. ‘Jesuitas na Asia’ (MS 4498) is the most substantial collection, made up of transcripts of hundreds of letters and narratives held in the Ajuda Library in Lisbon. Other documents were transcribed or photographed in various libraries, learned societies and mission archives in Portugal, Spain, Italy, the Vatican, Britain, Goa and Macau. In addition, there is a large collection of typescripts, mostly bound, comprising Portuguese translations and transcripts of writings of the English historian C.R. Boxer (1904–2000).

Of the original manuscripts, the oldest is a fifteenth-century codex containing the regulations of the Cistercian Abbey at Alcobaca in Portugal. Other manuscripts include a volume of sermons and addresses of Bishop Pedroso Guimaraes (d. 1789), medical prescriptions, an album of verse and prose concerning the Camões Grotto at Macau (c. 1850–80), and some reports of the Macau Government of the 1940s.

Leaving aside a long series of world maps produced by National Geographic, most of the maps (310 sheets) in the Braga Collection relate to Macau, Hong Kong and southern China. They include British Admiralty charts, topographical maps produced by the United States War Office, maps issued by the Hong Kong Public Works Department and tourist maps. They mostly date from the twentieth century, but there are a number of important older maps: 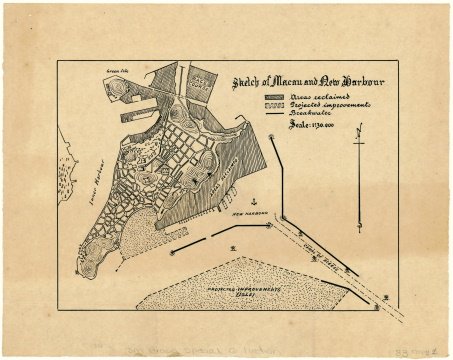 There are about 160 paintings, drawings, sketches and prints in the Braga Collection. They mostly depict scenes of Macau, Hong Kong and China in the nineteenth century, but there are also historical and religious works. Among the artists are Marciana Baptista, M. Bruce, George Chinnery, E. Hildebrandt, R.P. Leitch, Vicente Pacia, George Smirnoff and Charles Hamilton Smith. There are two original works by Chinnery, one being a watercolour and the other a pencil self-portrait.

The subject matter of the 4220 photographs in the collection is similar in scope. There are many photographs of old Macau and old Hong Kong, extending back to the mid-nineteenth century, as well as photographs documenting the extraordinary growth of Hong Kong after World War II. There are also portraits of governors and officials. Other photographs record travels in Europe, the Middle East and Australia.

The personal papers of Braga are extensive and include family and business correspondence, correspondence about his research and collection, lectures, articles, bibliographies, translations, newspaper cuttings, photographs, postcards and publications. There are papers of his father José Pedro Braga and a large number of family photographs extending back to about 1880. Of the bibliographies, the most substantial is a bio-bibliography that Braga worked on for many years. Totalling over 8000 sheets, it lists books, articles and manuscripts relating to the activities of the Portuguese and Europeans generally in the Far East. Another major work is Braga’s translation of ‘Asia Extrema’ by Fr. Antonio Gouveia (1644), the original of which is in the Biblioteca da Academia da História in Madrid.

The books, pamphlets and periodicals in the Braga Collection are kept together as a formed collection within the Asian Collections. They have been catalogued individually and the call numbers have the prefixes BRA, BRAq or BRA pam. The newspapers have been integrated in the Newspapers Collection.