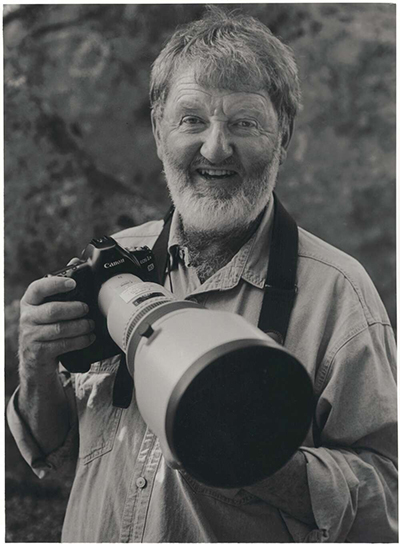 Jeff Carter (1928-2010) was born in Melbourne and educated at Melbourne High School. After he left school he went on the road with his typewriter and folding camera and worked as a bush worker and freelance photographer-journalist. In 1949 he settled in Sydney where he edited a magazine, Outdoors and Fishing, and wrote westerns. In 1954 he resumed work as an itinerant freelance journalist, with articles published in Walkabout, Pix, People, Women’s weekly, Bulletin, Wheels and other magazines. He also wrote many books on rural and outback Australia and produced the television series Wild country. In 1962 he and his wife bought a farm at Foxground on the New South Wales south coast. His first photography exhibition was held in 1991 and there have been several exhibitions since then. Carter described himself as ‘the photographer of the poor and the unknown’.

In 1992 the Library purchased from Carter the recordings of his interviews with sleeper cutters. Further oral history interviews were acquired in 1993–96. It also bought a small number of photographs in 1992–95. The bulk of the photographs have been bought since 2001.

The Jeff Carter Collection contains interviews with about 40 individuals, most of whom were living in rural towns or properties in New South Wales, Queensland and Tasmania. The earliest interviews were recorded by Carter during the filming of the television series Wild country in 1974–75. They consist of 12 interviews recorded at Alice Springs, Lake Eyre, Coober Pedy, Ayers Rock and other places in central Australia. The other interviews were taped in 1992–96. They include nine interviews with ‘Corner Country’ residents, living at Bourke, Tibooburra and elsewhere, five interviews with sleeper cutters and charcoal burners in Mathoura and Echuca, four interviews with fishermen in Eden and Bermagui, and interviews with miners and others in Queenstown, Tasmania.

There are over 600 photographs in the Jeff Carter Collection. Most of the photographs acquired in 1992–95 were of people who had recorded oral history interviews with Carter. The photographs purchased after 2001 were taken over a long period from about 1955 and cover a diverse range of subjects. There are several series: scenes at Queen Victoria Markets, Melbourne; travelling vaudeville shows; aspects of beach culture; and Saturday ‘arvo’ at various places. Many of the photographs deal with groups of workers: cane cutters, drovers, Aboriginal workers, fossickers, hop pickers, rabbit shooters, quarry workers, camel drivers, steel workers, tree fellers and cannery workers. Other subjects include cars, inner Sydney, street scenes, street demonstrations, a bush wedding, country dances, shearers’ quarters, a hotel and a jam factory.

Carter, Jeff. From the Alice to the Arctic: 40 years of motoring with Jeff Carter, Sydney : Hodder & Stoughton, 1989