Manfred Hans Claasz (b. 1942) was born in Ceylon and educated at the Royal College, Colombo. From August 1962 to March1972 he was employed by the Scottish Tea and Lands Company of Ceylon, initially at the Plaiderie Division of Sarnia Group, Kandegedera and later at Mahadowa Division, Mahadowa Group, Madulsima; and then for five years as Superintendent and Manager of Haputale Estate, Haputale. He was a member of the Dutch Burgher Union of Ceylon.

In April 1972 Claasz emigrated to Australia. He first lived in Sydney and married Christine Margaret Thorpe in January 1973 before moving to Canberra in 1975. He was the Finance Officer at the ANU Press in 1976-80 and during this time he graduated with a Bachelor of Economics at the Australian National University where he was Assistant Business Manager of the Research Schools of Social Sciences and Pacific Studies. From 1982 to 1987 he was Financial Manager, at the Australian National Gallery. He then moved to Cooma to be General Manager, Corporate Services, of the Snowy Mountains Engineering Corporation. From 1992 to 1994 he was Head of Corporate Services of the Australian Institute of Marine Science at Townsville and he has worked at a number of other companies in more recent years.

As a young man, Claasz acquired books, pamphlets, maps and ephemera about the Ceylon tea country. He wrote that ‘I used the books to educate myself about the archaeology, history and geography of the tea country; I incorporated parts of the histories into my diaries’.

In 1984 the first instalment of the collection was donated to the Library by Claasz under the Taxation Incentives for the Arts Scheme. He donated a second instalment in 1993.

The Manfred Claasz Collection comprises about 200 books and pamphlets and 73 serial titles. Most of the works were published in Ceylon or relate to Ceylon, including its history, politics, botany, fauna, national parks, the tea industry, ancient cities, paintings and other arts. There are several tourist guides and similar publications. The serials include:

The Collection includes a number of manuscripts and archival records of the tea industry in Ceylon and particularly the estates of the Scottish Tea and Lands Company of Ceylon. There are also extensive records of the ANU Press, the National Gallery of Australia and the Snowy Mountains Engineering Corporation.

Of particular interest is an ola (palm leaf) manuscript which a friend of Claasz had found in an antique shop in Colombo. Almost certainly written in a Buddhist temple in the early nineteenth century, it is in old Singhala and deals with the casting of horoscopes.

The collection contains 11 maps (35 sheets) of Ceylon. They comprise several maps issued by the Survey Department of Ceylon, including one of Haputale (1966), and two British Admiralty charts of coasts of Ceylon (1910, 1913). There is also a diazo print of factory plant at Haputale. 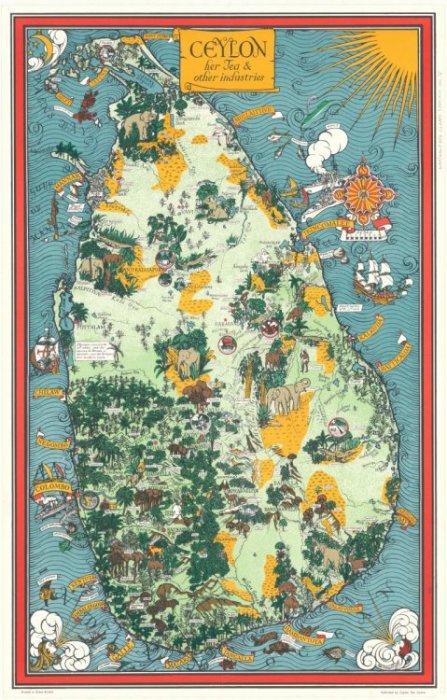 From an early age, Claasz created and accumulated personal papers and the collection documents in great detail his life from his schooldays in Ceylon until about 1990. The papers include school reports, certificates, family letters, diaries, notebooks, general and personal correspondence, job applications, scrapbooks, newspaper cuttings and photographs.

The manuscripts and personal papers are kept together within the Manuscripts Collection at MS 7617. The papers have only been roughly organised and access to them is restricted. A finding-aid is available online.