Alexander Dalrymple (1737–1808) was born at Newhailes, Scotland, and educated at a school in Haddington. In 1752 he was appointed a writer in the East India Company and was posted to Madras. He became interested in trade with South-East Asia and made three voyages to the Philippines, Borneo and Sulu. He resigned in 1763 and returned to London in 1765, where he carried out research on the exploration of the southern oceans. His first book was published in 1767. He failed to secure the command of the official expedition to Tahiti and the South Seas in 1768, and in the next six years he published charts, navigational memoirs and a series of plans of ports in the East Indies. In 1775 he was re-appointed to the East India Company and returned to Madras for two years. In 1779 he became the company’s hydrographer and in the next 15 years published almost 550 plans of ports and small-scale charts of the East Indies.

Dalrymple was a member of the Royal Society and regularly advised the Government on geographical matters, including exploration voyages. In 1795 he was appointed the first Hydrographer to the Admiralty, while retaining his post at the East India Company. With the help of Aaron Arrowsmith and John Walker, he sorted and classified the growing collection of charts and in 1800 began to publish the first Admiralty charts. He was dismissed from the Admiralty in 1808, a few weeks before his death.

Dalrymple’s vast library, which included many manuscripts, was sold at auction in 1809. The provenance of the collection acquired by Leon Kashnor is not known.

The Dalrymple Collection was purchased by the Library from Leon Kashnor of the Museum Bookstore in London in 1934.

The Dalrymple Collection contains 40 books and pamphlets written or compiled by Dalrymple between 1767 and 1806, and 15 other books containing references to him. Some of them are extremely rare. They include the following books by Dalrymple:

An account of the discoveries made in the south Pacifick Ocean, previous to 1764 (1767)

Historical collection of the several voyages and discoveries in the South Pacific Ocean (2 vols, 1770–71)

Collection of voyages chiefly in the South Atlantick Ocean (1775)

Considerations on the East India Bill now depending in Parliament (1779)

Account of the navigation between India and the Gulph of Persia, at all seasons (1786)

Parliamentary reform, as it is called, improper in the present state of this country (1792)

Collection of English songs, with appendix of original pieces (1796)

The collection includes 22 letters, together with enclosures, written by Dalrymple between 1784 and 1805, and also letters to Dalrymple from Andrew Ross (1795) and Sir Joseph Banks (1800). The principal recipient of the letters was the Secretary of State, Henry Dundas, later Viscount Melville.

The collection contains about 760 charts, plans and coastal views. A few date from the seventeenth and early eighteenth centuries. Most of them were published by Dalrymple between 1769 and 1807 and were based on earlier maps and surveys by William Bligh, Louis de Bougainville, James Cook, William Dampier, Thomas Forrest, James Horsburgh, John McCluer, Jean de Surville and other navigators.

Atlas containing 53 charts of Africa, Bay of Bengal and East Indies, 1769–1806, including a copy of a sixteenth-century manuscript map of the Indian Sea and Moluccas.

Album containing 52 charts of explorations of various navigators in Bay of Bengal, 1772–1802 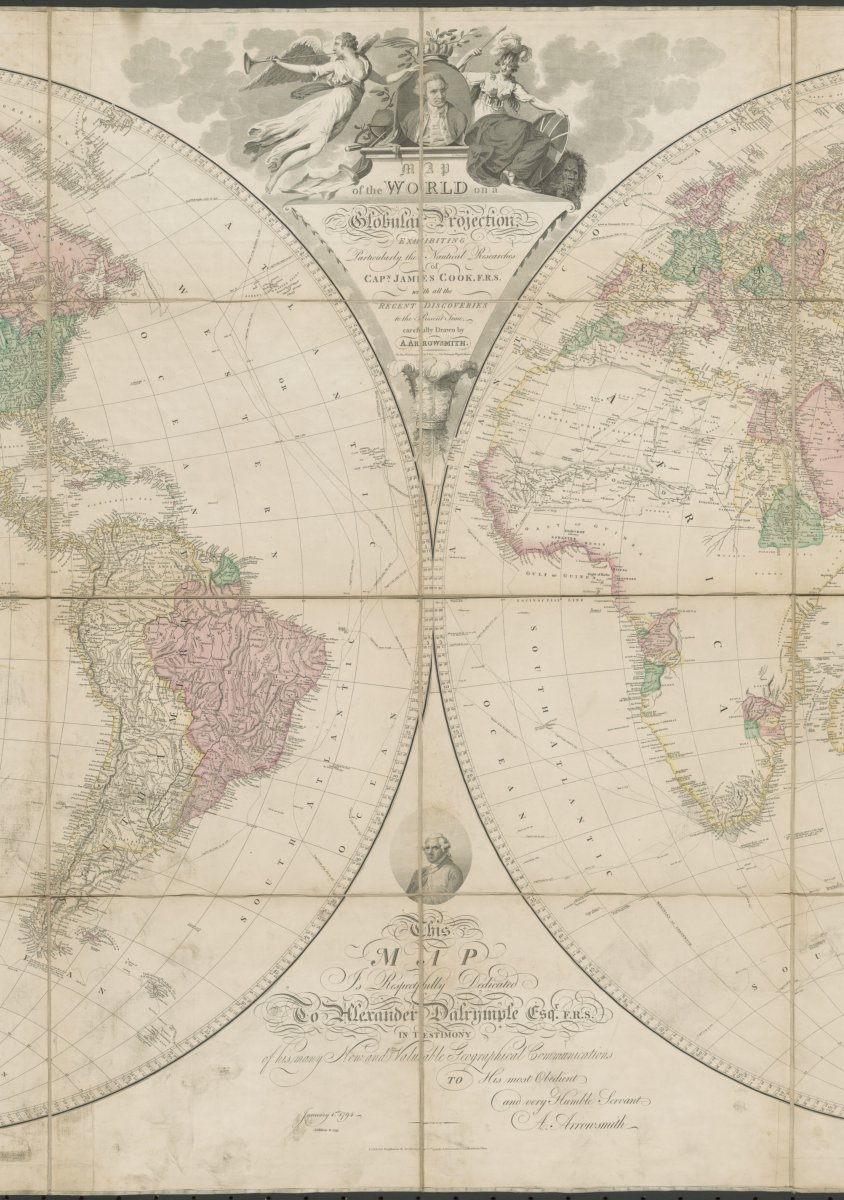 Arrowsmith, Aaron, Map of the World on a Globular Projection (1799)

The collection includes a pencil drawing of Dalrymple by Nathaniel Dance (1794). There are also portraits of Dalrymple engraved by William Ridley (1802), W. Daniell (1809), T. Blood (1816) and Conrad Westermayer, and a Chippendale armorial bookplate.