The London Missionary Society, founded in 1795, was a non-denominational Christian mission with strong links with the Congregationalist movement. The Society’s first missionary in China was Robert Morrison. He established a mission at Guangzhou (Canton) in 1807 and was later joined by William Milne and Walter Medhurst. Progress was extremely slow, even though the Chinese Government tolerated Christian missions after 1843. The first British medical missionaries were William Lockhart and Benjamin Hobson, who arrived in 1838–39 and later established a hospital in Shanghai and a medical college in Beijing. By the end of the nineteenth century the main bases were at Guangzhou, Xiamen (Amoy), Shanghai, Hankou (Hankow), Beijing, Tianjin (Tientsin) and Chongqing (Chungking). In the interwar years many of the responsibilities of the mission were transferred to the Church of Christ in China, which became fully organised in 1927. The last London Missionary Society missionaries left the People’s Republic of China in 1952.

The collection was purchased from the London Missionary Society in 1961.

The collection consists of 722 books, pamphlets, leaflets, manuscripts, newspapers and maps. The works are mostly written in Chinese, but there are also 37 titles in Japanese, three in Korean and two in Manchu. In addition, there are some bilingual works and one trilingual work (Chinese–Malay–English). The bulk of the works were published between the mid-nineteenth century and the early twentieth century, but there are a few published in the seventeenth century and a small number of works dating from the 1950s. They were published in Malacca, Hong Kong, Beijing, Shanghai, Ningbo, Guangzhou, Nanjing, Hankou, Taibei, Edo (Tokyo), Kyoto, San Francisco and elsewhere.

There are three Christian almanacs, published in 1844, 1851 and 1859, and five Qing almanacs. There are also works on Confucianism, Daoism (Taoism) and Chinese Buddhism.

Dictionaries, grammars, phrasebooks and other works on the Chinese language make up a major group within the collection. There are also reprints of classical writings and of edicts of the Emperor Kangxi (1654–1722) and other imperial writings.

The collection contains a significant group of works relating to the Taiping Rebellion of 1850–64, some of which are extremely rare, if not unique. They include three proclamations issued by the Taiping leaders, a Taiping calendar, several pamphlets published in Nanjing by the rebels and works on their Heavenly Kingdom of Great Peace (LMS 587–589, 627–629).

Among the modern publications are 25 pamphlets on psychology and intelligence testing by the Chinese psychologist Xiao Xiaorang (LMS 470–495). They are mostly undated, but were probably written in the 1930s.

As well as published works, the collection contains 25 manuscripts. One of the most interesting is a travel diary kept by the Cantonese Christian leader Ho Tsin-sheen in 1843 (LMS 261). Other manuscripts include works on Chinese medicine, vaccination, anatomy, astronomy, Anglo–Chinese relations and stories.

The London Missionary Society Collection is kept together as a collection within the Asian Collections, with the exception of the maps, which are held in the Maps Collection. 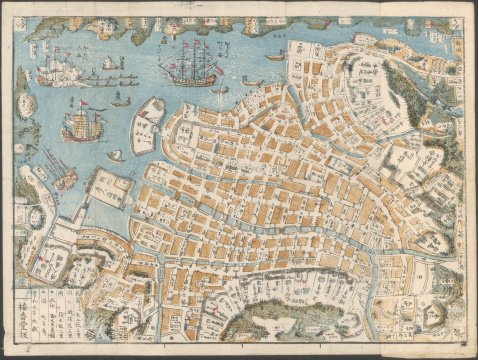 The maps that formed part of the collection are kept together within the Maps Collection. Every item has been individually catalogued; the call numbers have the prefix LMS. They have been digitised and are available on the Library’s website.