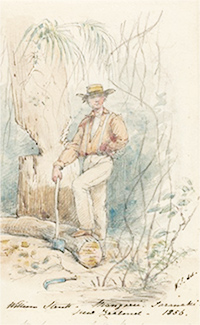 The son and grandson of artists, William Strutt (1825–1915) was born in Teignmouth, Devon. His family lived in Boulogne for a short time and he returned to France in 1838. He studied in Paris in the atelier of Michel-Martin Drölling and at the École des Beaux Arts and spent a lot of time at the Louvre. He received many commissions for illustrating books, both in France and England, but poor health led him to emigrate to Australia in 1850.

Strutt was employed in Melbourne by the Ham brothers and produced engravings for the Illustrated Australian Magazine. He designed, engraved or lithographed postage stamps, posters, maps and seals. John Pascoe Fawkner was a patron and Strutt painted a number of oil portraits of notable Victorians, as well as miniature watercolour portraits of Aborigines, police and bushrangers. He and his family moved to New Plymouth in New Zealand in 1856, but they returned to Melbourne in 1857. Together with Eugene von Guerard, Ludwig Becker, Nicholas Chevalier and James Smith, Strutt revived the Victorian Society of Fine Arts. His final works in Australia were sketches of the preparations of the Burke and Wills expedition.

In 1862 Strutt returned to England. In the next 30 years he regularly exhibited paintings at the Royal Academy. He was elected a member of the Royal Society of British Artists.

The earliest acquisition by the Library of a Strutt painting was in 1915, when it purchased his portrait of John Pascoe Fawkner from E. McMichael of Adelaide. Seventy-five works by Strutt were purchased in 1964 from his granddaughter, Margaret Strutt Davies of London, and in the following year the Library bought 46 works from the London firm of David Black. In 1966 the typescript entitled ‘Cooey, or the Trackers of Glenferry’ and the accompanying drawings were bought from the Sydney bookseller E.J. Hearn. The largest group of Strutt paintings and drawings (122) and the typescript autobiography formed part of the Nan Kivell Collection, which was acquired in 1959.

The Library holds about 280 works by Strutt, including five oil paintings and 12 watercolour paintings. The remainder are pen and wash, charcoal and wash, pencil and wash, pen, pencil or charcoal drawings. They date from about 1837 to 1900 and were painted or drawn in France, Australia, New Zealand, Africa and England. 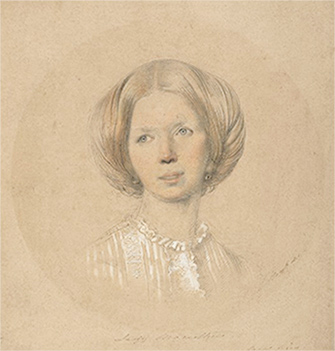 About 135 of the works are of Australian subjects, including some completed after Strutt’s return to England in 1862. They include paintings and drawings of Indigenous peoples, a bullock driver, bushrangers, policemen, a soldier, a swagman, the Burke and Wills expedition, the missionary ship John Williams, the Richmond police barracks, a view at Woodend, a settler’s hut, flowers, trees, shrubs, kangaroos and birds. There are a number of sketches of bushfires, including preliminary sketches for his great painting Black Thursday, depicting the Victorian bushfires of 1851. Among the portraits are an oil portrait of John Pascoe Fawkner (1856), a wash drawing of the Reverend Thomas Binney, pencil and crayon drawings of Sir Edward Macarthur and Lady Macarthur (1858), and a watercolour portrait of Robert O’Hara Burke (1860).

There are about 32 paintings, drawings and studies of ‘the little wanderers’, inspired by the disappearance and eventual discovery of the three Duff children in the western district of Victoria in 1864. Two watercolours of the children are copies of an oil painting that Strutt exhibited at the Royal Academy in 1865, while the remainder date from about 1876. They include nine pencil and wash illustrations and eight chapter headpieces for his unpublished story ‘Cooey, or the trackers of Glenferry’, which was loosely based on the Duff incident. 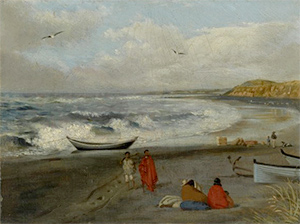 Among the small number of New Zealand works are two oil paintings, Beach at Taranaki, New Zealand, with Maoris and Boats and Hare Pomare and his Wife Hariate. There are also pencil drawings of Maori, a tracing of Mount Egmont and a wash drawing of Strutt at Mangaire, Taranaki (1856).

The Library holds two typescripts by Strutt. ‘Cooey, or the Trackers of Glenferry: A True Australian Story’ (MS 5985) is dated 1901 and is an account of the disappearance of the three young children of Andrew Duncan, a carpenter on Glenferry Station in Victoria. After nine days in the bush, the children were discovered by Indigenous trackers. It is based on the disappearance and discovery of the three Duff children in the western district of Victoria in 1864. ‘Off for Australia’ (MS 4367) describes Strutt’s voyage to Australia in 1850, his impressions of Melbourne, the Victorian separation celebrations, the Ballarat goldfields, bushrangers, farming in New Zealand, Maori and the Burke and Wills expedition.

A microfilm copy (mfm G657) is held of the fuller autobiography entitled ‘The Life and Adventures of the Painter of Peace’, the original of which is in the Mitchell Library in Sydney. The Library also holds photocopies of some papers of George Mackaness (MS 5152) comprising notes by Strutt and letters from Margaret Strutt Davies, which are also in the Mitchell Library (ML DOC 2008).

Two of the oil paintings by Strutt in the Nan Kivell Collection, Summer Effect, Evening, Melbourne and Summer Sky, Melbourne (1862) are on long-term loan to the National Gallery of Australia.