Harold Stannett Williams (1898–1987) was born in Melbourne. He attended Trinity Grammar School and Melbourne High School, worked in the Commonwealth Laboratory and then studied medicine at the University of Melbourne. In 1919 he visited Japan and, almost unintentionally, found himself engaged as an assistant by the Scottish mercantile and agency firm of Findlay Richardson & Co. in Yokohama. In the following year he was transferred to Kobe and he decided to remain in Japan permanently. In 1926 he became manager of the silk firm of Cooper & Co. Ltd, which later became Cooper Findlay & Co. Ltd. He left Japan in 1941 and enlisted in the Australian Army, serving in Africa, the Pacific and Burma. He returned in 1945 as a member of the British Commonwealth Occupation Forces. He was discharged, with the rank of major, in 1949 and joined E.W. James in reviving the business of the English firm A. Cameron & Co. He became managing director, retiring in 1962 but remaining the sole shareholder.

In 1953 Williams began writing articles about the foreign settlements in Japan that appeared regularly in Mainichi Daily News and other journals. His books include Tales of the Foreign Settlements in Japan (1958), Shades of the Past or Indiscreet Tales of Japan (1959), Foreigners in Mikadoland (1963) and Kobe Regatta and Athletic Club: The First Hundred Years (1970). Selected writings were republished posthumously in West Meets East: The Foreign Experience of Japan (1996), which included sketches by his wife Gertrude (Jean) Williams (1909–1999).

In 1949 Harold and Gertrude Williams acquired a property on the James Estate in the Shioya hills outside Kobe. It had an immaculate garden with commanding views of the hills and Osaka Bay. Williams lived there for the rest of his life and it was in this house that he assembled his large collection of books, manuscripts, photographs and artworks. In 1969 he wrote that his aim had been ‘to gather as much information as possible bearing upon the contribution made by foreigners to Japanese life, and culture, the manner in which they have impinged upon Japanese history, and all matters relating to the Foreign Settlements’.

Tales of the Foreign Settlements in Japan (1958)

Shades of the Past or Indiscreet Tales of Japan (1959)

In 1970 Williams decided that his collection would be offered as a gift to the Library and he established a trust fund to support its preservation. Most of the books were transferred in 1978 and the manuscripts, personal papers and photographs followed in 1981. Following his death in 1987, Gertrude Williams made several donations of art books, photographs, manuscripts and also etchings and sketches of Hiroshi Kambara. Their son Peter Williams presented further albums and papers in 2002. Money from the Harold S. Williams Trust Fund has been used to purchase a number of Japanese books.

The Harold S. Williams Collection contains about 3200 books, pamphlets, periodical and newspaper titles, as well as a considerable quantity of printed ephemera. Most of the publications are in English, but there are a few works in French and Japanese.

The main part of the collection relates to Japan and there are smaller components dealing with China and Korea. There are a large number of books recording the impressions and experiences of European travellers and residents in Japan. Other books deal more specifically with the history of Japan, its foreign relations, politics and government, military campaigns, businesses, foreign missions, society and customs, local history, art, architecture, literature, legends, philosophy and religions. Other subjects include Tokyo, Kobe and the foreign settlements. The collection contains a number of dictionaries, guidebooks, novels and short stories.

Twentieth-century books make up the bulk of the collection, but there are a number of nineteenth-century works extending back to the beginning of the Meiji period. The following titles are representative of the kinds of publications that Williams collected:

Alcock, Rutherford, The Capital of the Tycoon: A Narrative of a Three Years’ Residence in Japan (2 vols, 1863)

Fortune, Robert, Yedo and Peking: A Narrative of a Journey to the Capitals of Japan and China (1863)

Greey, Edward, The Golden Lotus and Other Legends of Japan (1883)

Maclay, Arthur Collins, A Budget of Letters from Japan (1889)

Murdoch, James, From Australia and Japan (1892)

Osborn, Sherard, Quedah: A Cruise in Japanese Waters: The Fight on the Peiho (1865)

Palmer, Henry Spencer, Letters from the Land of the Rising Sun (1892)

Wenckstern, Friedrich von, A Bibliography of the Japanese Empire (1895)

Whitney, W.N., A Concise Dictionary of the Principal Roads, Chief Towns and Villages of Japan (1889).

In addition to single issues of newspapers, there are good runs of:

The books donated by Gertrude Williams mainly relate to Japanese and Chinese painting, decorative arts, wood prints and flower arrangement. They include exhibition catalogues, calendars, picture books and several volumes in the Kodansha Library of Japanese Art. The books contain her bookplate and many of them have been annotated.

The Harold S. Williams map collection consists of maps relating to Japan with a few items relating to China and Korea. The maps hold a heavy focus on tourist information on Japan such as tourist brochures and road maps, however political maps, development plans, and artistic impressions of specific areas are also included. William's main collecting focus was on Kobe, as this was his place of residence, however material from larger cities such as Osaka and Tokyo are present. 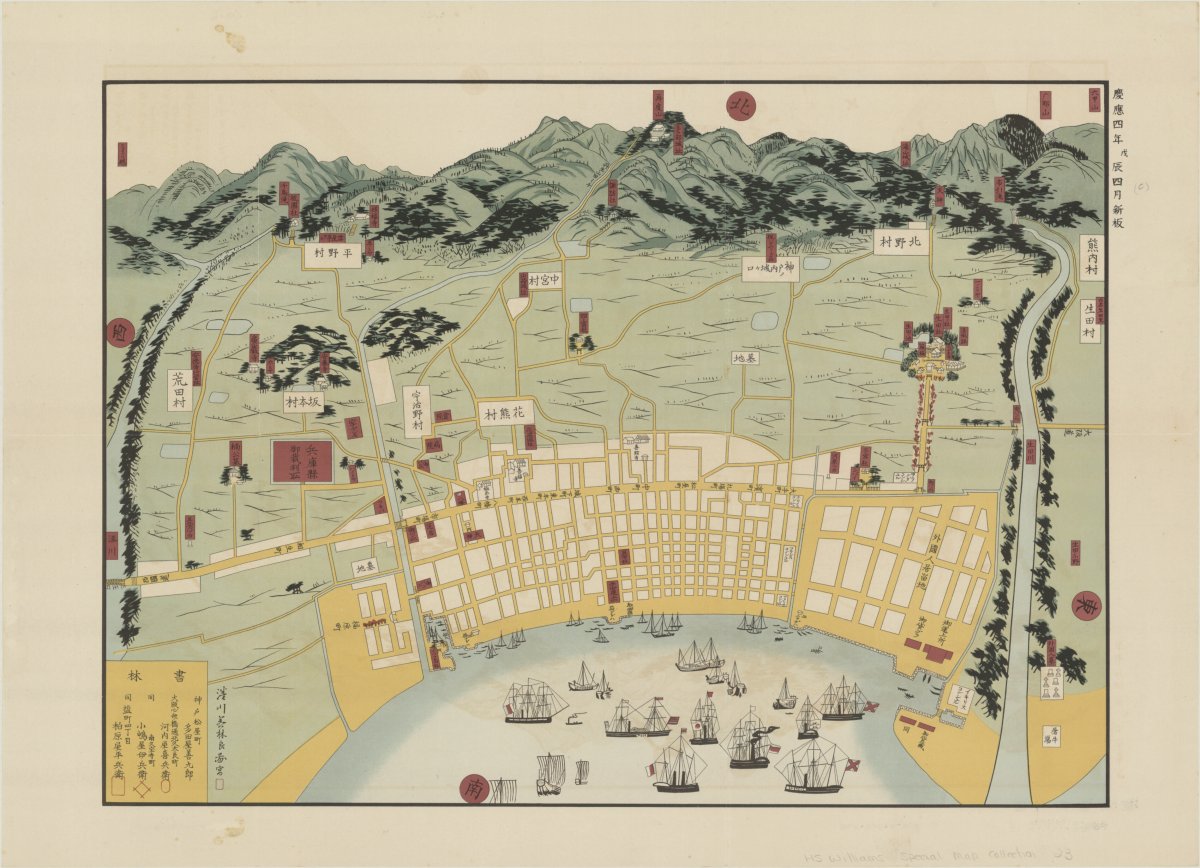 The Harold S. Williams Collection contains personal and family documents, correspondence, subject files, newspaper cuttings, typescripts of articles by Williams and other writers, scrapbooks and printed ephemera. The subject files, created between 1949 and 1980, make up the most substantial part of the archives. They contain notes, references, newspaper cuttings and sometimes photographs on individuals, families, organisations, businesses, clubs, newspapers, events and subjects and are an extraordinary resource on the foreign settlements in Japan from the Meiji Restoration onwards. There are also papers of Gertrude Williams relating to her interest in Japanese arts and crafts, including typescript articles, newspaper cuttings, prints and photographs.

Williams assembled 36 photograph albums depicting Kobe, Tokyo, Osaka, Yokohama and Nagasaski, as well as more general subjects, from about 1860 to 1970. The Kobe albums, which are the largest group, include many photographs of the James Estate at Shioya. In addition to the albums, there are loose photographs, negatives, and stereoscopic and aerial views.

There are also 16 framed etchings and an album of sketches and watercolours.

The books, pamphlets, some of the newspapers and the artworks in the Harold S. Williams Collection are kept together as a formed collection and housed in the Asian Collections. They have been catalogued individually and the call numbers have the prefixes HSW, HSWq, HSWf and HSW pam. Single issues or short runs of newspapers are housed in the Newspapers Collection at X 1303.

The personal papers, manuscripts and photographs are held in the Manuscripts Collection at MS 6681. A guide to the papers is available online at https://nla.gov.au/nla.obj-234441386/findingaid.