Read the Library’s Collection Development Policy and our statement on Collecting Direction and Focus.

In accordance with the National Library Act 1960, the Library collects documentary resources relating to Australia and the Australian people so that the Australian community—now and in the future—can discover, learn and create new knowledge.

We collect today what will be important tomorrow.

The National Library of Australia is a world-leading and respected custodian of Australia’s published, written, oral, visual and digital heritage. We ensure Australian history, culture and knowledge is sustained for all Australian people, both now and in the future.

The Library enables the creation of knowledge. It develops, curates and preserves an astounding and diverse collection that inspires, delights and educates Australians.

This strategy outlines the Library’s priorities for collecting, operating in conjunction with the Collection Development Policy, and identifying the areas for sustained focus over the next four years.

This is a mandated function under the Copyright Act 1968.

2. Australiana: Material by Australians and about Australia

The Library will continue to collect primary material that is of national significance, selectively acquiring a wide range of unique materials documenting the lives and activities of Australian people, places and events that have shaped society.

To improve the range and representation of the Library’s collection, the Library also intends to strengthen its thematic collecting focus. Identified priorities include (but are not listed in priority order):

Overseas resources are selectively collected to inform and enhance Australians’ understanding of their region and their place in the world.

Collecting material from and about Indonesia, China, and the Pacific (including Timor- Leste) is the Library’s next highest priority after its Australian collecting. This reflects Australia’s strategic interests and our geographical position within this region. This is subject to change according to social or political factors and the Library’s priorities and resources. The focus of this collecting is predominantly related to social sciences, history and politics, culture and society.

China: Reflecting the strong Australia–China bilateral relationship that is based not only economics and trade but also community and cultural links, the Library collects material from and about China.

The Pacific: The Library prioritises countries in Melanesia, focusing on Papua New Guinea, the Solomon Islands, Vanuatu, Fiji and New Caledonia as well as Timor-Leste. The Library does not aim to duplicate the well-established collecting programs of the National Library of New Zealand and libraries in Hawaii, which have strengths in Polynesia and Micronesia.

The Library selectively acquires, or provides access to, publications that offer an understanding of global issues, current events and topics affecting Australia, and of geographical regions where Australia’s national, economic and strategic interests are clearly articulated, including material that documents the history of Australia’s First Nations and European colonisation to the present day. The aim is to develop the strongest possible collection for the broadest cross-section of Australian society. In the current resource environment, this necessitates a reduction in the collecting of overseas materials outside the identified priorities and countries. 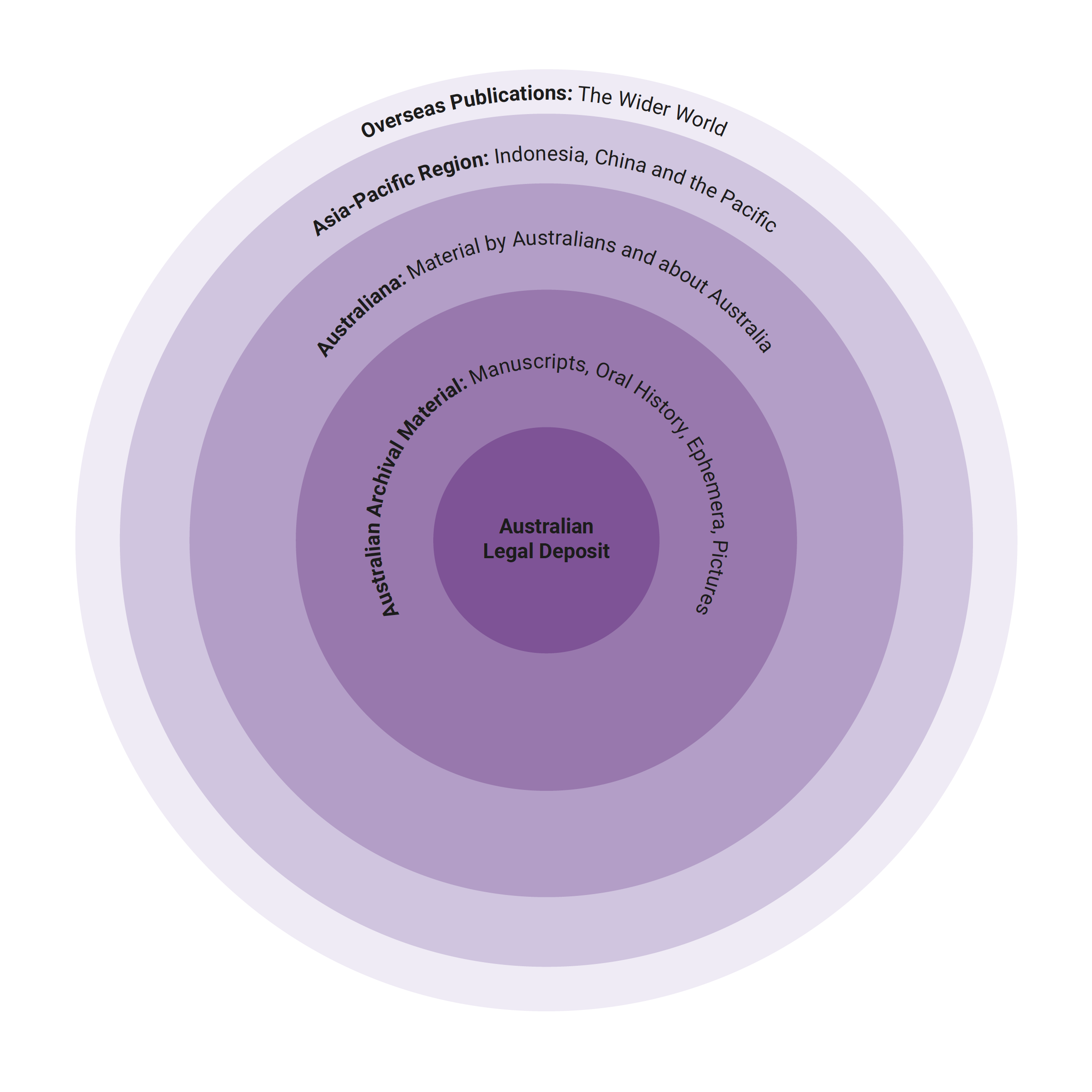