Ernest William Pearson Chinnery (1887-1972) was born in Waterloo, Victoria, and educated at state schools. In 1909 he joined the public service in Papua as a clerk and in the following year he was appointed a patrol officer. He worked first in the Kumusi division and later patrolled in new country in the central division, where he discovered the source of the Waria River. In 1917 he joined the Australian Flying Corps. He was demobilized in England in 1919 and became a research student under the anthropologist A.C. Haddon at Cambridge University. He had already published anthropological papers and lectured to the Royal Geographical Society.

In 1921 Chinnery returned to New Guinea as labour adviser to New Guinea Copper Mines Ltd. In 1924 he was appointed government anthropologist of the Mandated Territory of New Guinea. He became the first Director of District Services and Native Affairs in 1932 and from Rabaul he directed the extension of control into the central highland valleys. In 1938 he was seconded to head a new Department of Native Affairs in the Northern Territory, where he remained until 1946. He hoped to return to Papua New Guinea as an anthropologist, but found no support. He was an Australian adviser at the Trusteeship Council in 1947 and served on two United Nations missions to Africa. He lived in retirement in Melbourne.

Sarah Johnston Chinnery née Neill (1887-1970) was born in Belfast, Northern Ireland. In 1900 she moved to Aylesbury, Buckinghamshire, to keep house for her older brothers. One of the brothers gave her a camera and she became an enthusiastic and talented photographer. She joined three camera clubs and later, having acquired a motorbike, she toured the countryside, capturing landscapes and interiors in different lights. She qualified as a dentist and carried on her brother’s practice in Aylesbury. She married Pearson Chinnery in 1919. When they travelled to Australia in the following year, she took with her a Sinclair Una quarter-plate camera and a Thornton Pickard horizontal enlarger, which she used all her life. Sarah Chinnery began keeping a diary in Port Moresby in 1921 and continued the practice intermittently until she left Rabaul at the end of 1937. Several of her illustrated articles on life in New Guinea were published in newspapers in New Guinea, Australia and the United States.

The Library first approached E.W.P. Chinnery about his papers in 1962, but it was only in 1995 that it purchased his papers and maps from his four daughters, Sheila Waters, Patricia Tuxen, Prudence Neville and Mary Mansell. Further papers were bought in 1997. Sheila Waters donated Chinnery’s collection of photographs in 2003 and also the diaries and narratives of Sarah Chinnery. The photographs of Sarah Chinnery were purchased in 2006.

The Chinnery Collection contains 142 printed and manuscript maps dating from 1886 to 1953. The great majority are of Papua and the Mandated Territory of New Guinea. The collection is particularly strong in patrol maps, including patrols undertaken by Chinnery in the Mambare and Kumusi divisions of Papua in 1915-16. There are also several maps of patrols in New Guinea in 1926-35. Other items include maps of German New Guinea, geological maps by Evan Stanley (1912-22), maps showing the distribution of objects, native crops and customs, maps recording district and language boundaries, and photomaps of Papua, New Guinea, New Britain and the Solomon Islands (1942). 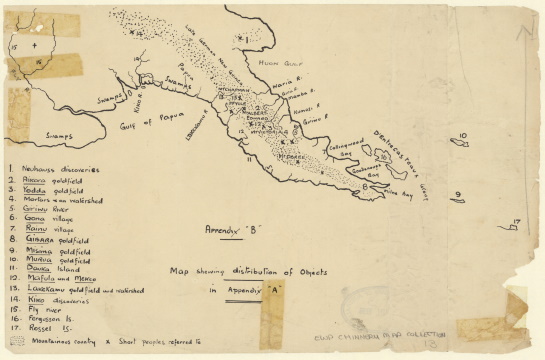 The photographs of Sarah Chinnery are far more diverse in subject matter and include many fine examples of pictorialism. There are 329 photographs and 1489 negatives. The earliest photographs, dating from before World War I, are of English scenes and country people. The Papua New Guinea photographs depict airfields, villages, houses, house posts, canoes, outriggers, markets, dances, trees, flowers, Rabaul Harbour, visits to Wau (1933), Salamaua (1933) and the Sepik (1935), the volcanic eruption at Rabaul (1937) and many villagers, servants and other Indigenous peoples. There is a series of portraits of notable anthropologists, such as Gregory Bateson, Raymond Firth, A.C. Haddon, A.R. Radcliffe Brown, W.H.R. Rivers, G. Elliott Smith and F.E. Williams. Other works include portraits of the Chinnery children and artists and writers who lived at Montsalvat, Melbourne streetscapes, landscapes, and flowers and other still life photographs.

The papers of E.W.P. Chinnery are extensive. They date from 1897 to 1971 and include his letters to his family, general correspondence, diaries, notebooks, job applications, official reports and memoranda, patrol reports, research notes, statistical data, translations, addresses, lectures, conference papers, press releases, newspaper cuttings, publications, drawings and photographs. They cover all phases of his career, from his arrival in Papua in 1906 to his work for the United Nations and the South Pacific Commission after World War II. His work in the Northern Territory in 1939-46 is especially well documented. The New Guinea papers include material on native rights, labour, education, languages and depopulation, while the anthropological papers deal with primitive religion, Duk Duk and initiation rights, sorcery, land tenure, kinship and other matters. Among the many correspondents are notable anthropologists such as Gregory Bateson, Hermann Detzner, A.C. Haddon and Margaret Mead.

There are 14 diaries of Sarah Chinnery, written in New Guinea in 1921-22, 1928-29 and 1932-37. The entries are intermittent but detailed and are a good record of her first impressions of the country and people, her homes and gardens in Port Moresby and Rabaul, and the social life of Australian officials and their families in the Mandated Territory in the years before World War II. There is a lengthy description of an expedition to the Sepik River in 1935 and a vivid account of the volcanic eruptions that destroyed Rabaul and killed many people in 1937. The diaries have been transcribed.

Chinnery had hoped to write a book about her home and garden at Malaguna Road, Rabaul, and she wrote a number of short narratives based on the diaries. The work was not completed, but the manuscript and typescript narratives are among her papers. Selections from the diaries and the narratives were published by the National Library in a book entitled Malaguna Road (1998).

The maps in the Chinnery Collection are held in the Maps Collection. They have been catalogued to item level.

Another collection of photographs of E.W.P. Chinnery, including copies of the New Guinea photographs in the National Library, is held in Museum Victoria in Melbourne. The National Archives of Australia has many files documenting the work of Chinnery in New Guinea and the Northern Territory.