The plane table was described in a number of surveying textbooks in the eighteenth century and it was widely used in surveying and mapping until superseded by aerial photography in the second quarter of the twentieth century. The plane table consisted of a flat rectangular board that was attached horizontally to a tripod. A sheet of paper was attached to the board and drawing commenced using a sighting vane or alidade, a clinometer for measuring angles, a compass and an aneroid barometer. If a large sheet was used, it was possible to plot the position of triangulation points, such as mountains, that were remote from the working area. The plane table enabled the surveyor to compile maps in the field, especially in open, undulating country.

Following the formation of the Australian Intelligence Corps in 1909, Colonel W.T. Bridges proposed that tactical maps be compiled recording the landforms around each of the state capitals. He enlisted the help of Lieutenant-Colonel C.F. Close of the War Office in London who advised that military mapping should not be based on existing parish and cadastral maps, but instead on a systematic network of triangulation using the plane table. Bridges and Close decided that the scale should be set at one inch to a mile, with each sheet covering half a degree of longitude and a quarter of a degree of latitude.

In 1910 the Royal Australian Engineers began to recruit surveyors and draftsmen. John Raisbeck produced the Cowes sheet, covering part of Westernport Bay in Victoria, which formed the basis of military topographic mapping for the next 25 years. The Australian Survey Corps was formed in 1915, but mapping in Australia came to a virtual standstill during World War I. After 1920 three military survey sections in Victoria, New South Wales and Queensland concentrated on mapping coastal areas, especially near the capital cities. In 1924 field sheets were compiled at a scale of two inches to a mile in order to enhance the level of detail. From 1928 onwards zinc plates were placed under the sheets, which considerably improved the stability of the table. The plane table method was used by the Australian Survey Corps until 1936, when it was replaced by aerial photography.

The collection of Australian plane table field sheets was donated to the Library by the Australian Directorate of Survey in 1977.

The collection consists of 182 original field sheets, representing 32 map sheets, dating from 1915 to 1936. They are mounted on board, metal or linen and are of various sizes and shapes. Many are signed and dated by the surveyor and some contain work summaries, indicating how much time was spent on travelling, field work, colouring and other phases of the work.

The collection includes surveys carried out in four States. The following are some of the areas represented in the collection: 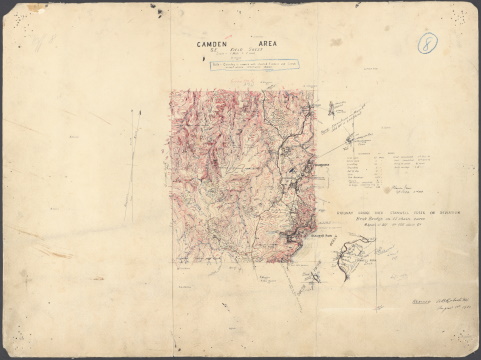 The collection of plane table field sheets is kept together as a formed collection within the Maps Collection. It has been catalogued and digitised.