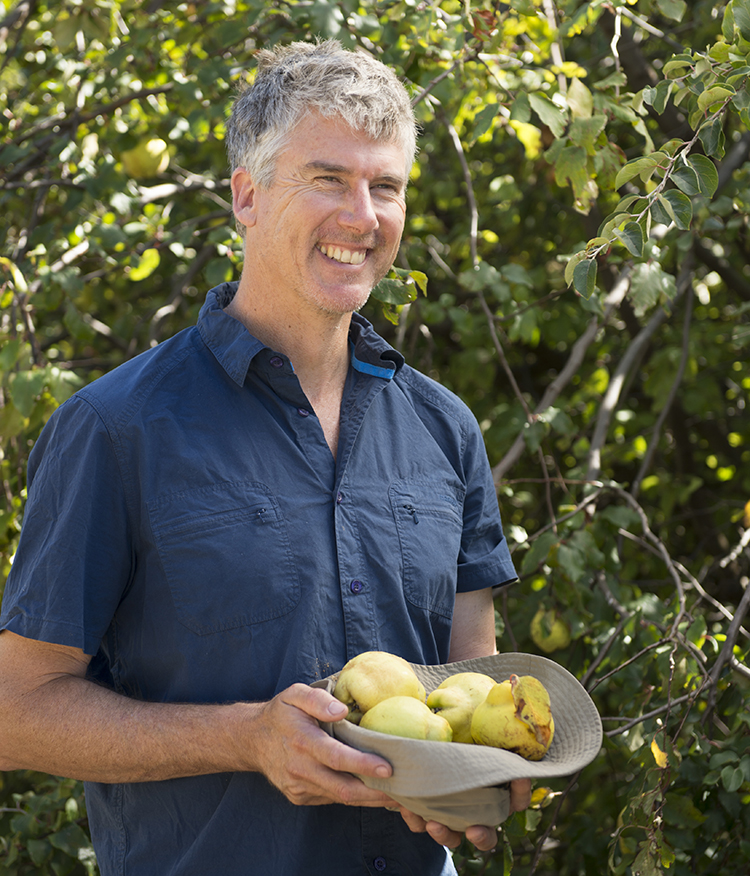 In his new book On Eating Meat, Matthew Evans offers a scorching manifesto on the ethics of eating meat, and asks the kinds of questions that will make vegans, vegetarians and carnivores stop in their tracks.

Matthew Evans trained as a chef and worked as a high-profile restaurant critic, before throwing it all away to become a smallholder in Tasmania’s peaceful and picturesque Huon Valley. Matthew now fattens pigs, grows vegetables and milks a recalcitrant dairy cow for regular Friday afternoon Feasts on his farm to table restaurant Fat Pig Farm, so he’s uniquely placed to write about where our food comes from and the ethics of eating meat.

Before he visits us to launch On Eating Meat we picked his brain in this Q&A on writing, reading and what he has learnt in his research for On Eating Meat. He also shares his all-time favourite recipe – Pat’s Mum’s Golden Puff Dumplings with Bay Leaf Custard.

Was there a catalyst to you going from being a city restaurant critic to thinking more about food ethics and setting up a farm?

I had a brain snap at 40 and got interested in gardening. Which set me thinking about my early adult ambitions, which included ideally living closer to the land. So, when the opportunity came up, I leapt at the chance to grow and rear my own food for the table.

What is the one thing you hope people take from On Eating Meat?

That it’s okay to eat meat, or not eat meat, but that all of us can make better choices, and when we have that opportunity, if we want to tread lighter on the earth, then we should grasp that opportunity with both forks.

Is there anything that surprised you about the meat/food industry that the general public may not know?

Sure is. The fact that otherwise healthy pregnant sows, mother pigs, are sometimes slaughtered on the day they are due to give birth, the live piglets removed and taken into sterile piggeries, to try to avoid the passing on of disease. Lots of bad things happen to animals that are against the law, or a failure of standards, but this slaughter is condoned, and considered an appropriate response to the problem of disease.

What is one thing you’d suggest our readers can do with their food choices to help the environment?

If I could suggest one thing, it’s to eat fresh organically grown food, be it animal or vegetable. Fewer animals die, soil health is likely to be better, the nutrient density of the food is probably increased, and the animal welfare standards better.

Why do you think reading is important?

Reading is both an education, and an escape. You learn more about the world, and can escape your own world, all through the written word.

Name three books that have inspired you or changed your life in some way.

Dirt, the Erosion of Civilisations, which opened my eyes to what damage framing has traditionally done to topsoil. A Prayer for Owen Meany, because it captures an impossible character, something that is only possible in print and using your own imagination. And Zen and the Art of Motorcycle Maintenance, because I read it at an impressionable early adult stage, and was mesmerised by the philosophical possibilities of ‘quality’.

I write because I want to share the joy of food, and I want people to know and trust what they eat. From a personal perspective, I do find writing is a creative outlet that makes me feel more whole. It could be as simple as a card or a letter, but doing it as part of my job is certainly more rewarding still. 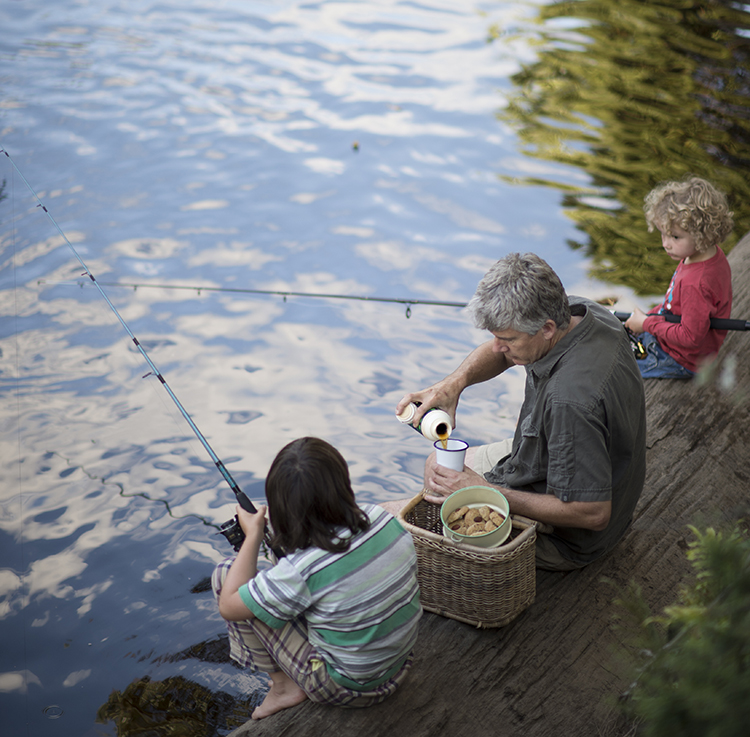 What did you read as a child?

I read Biggles. And The Hobbit. And Asterix, of which I was (and still am) a huge fan.

What is your process for researching and writing a book and do you use libraries in this process?

Most books I’ve written have been recipe books or autobiographical, so the research is in the kitchen, or trying to track down old diaries. But for On Eating Meat, I spent a lot of time not only on the road, but through the internet. For this book, I didn’t require a library, but I can imagine for more detailed technical and historical works, a library would be invaluable.

What are the three main research and writing tips you would give to other writers?

Check, check and check again. Check the details, confirm them via a separate reference, and re-read for literal errors or simple mistakes, and to make the book more readable. 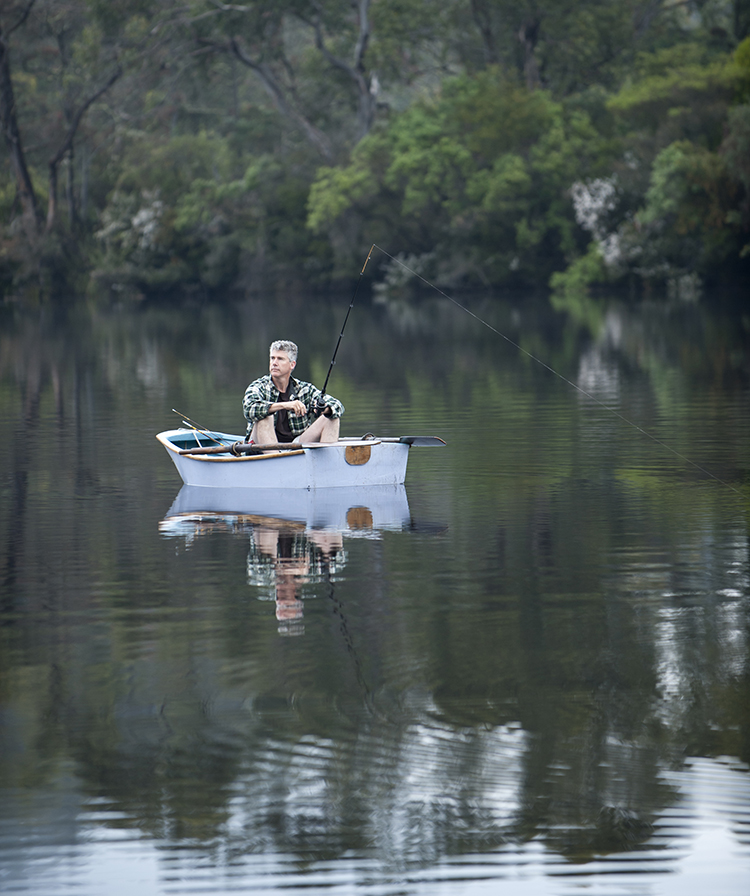 I thought it was only me who didn’t have a recipe for this Aussie staple. I thought I was the one who didn’t have a locally born granny to pass down the joy of pud, simply cooked, hot from the oven, and full of sweetness, tenderness and love. But a self-indulgence turned out to be the most requested recipe in nearly ten years of writing a weekly column.

Many thanks to at least four generations of O’Donnell women, who all cooked with this recipe, which originates in hand-written form from west of Melbourne.

Cut the first butter through the flour and salt (you can rub it in a bit if you like). Add the egg and enough milk to make a dough. Roll into 10-12 evenly sized small balls,

To make the sauce, heat the water, sugar, extra butter and golden syrup in a medium sized pan until boiling. Plop in the dumplings, put on a lid and simmer for 15 minutes, adding a little squeeze of lemon juice to make it a little more adult. Serve with bay leaf custard or vanilla ice-cream.

Before the common availability of vanilla, still one of the world’s most expensive spices, custard was flavoured delicately with other things. I love cumquat leaves, friend Helen O’Donnell recommends lemon myrtle, you can use a strip of lemon rind, cloves or beautiful fresh bay leaves.

Heat the milk with the bay leaves, turn off and let steep for 15 mins. Use a little milk to dissolve the cornflour in a bowl, whisk in eggs and sugar. Reheat the milk, strain and whisk into egg mixture. Pour this back into a clean saucepan and continue whisking or stirring until the custard thickens and comes to the boil.

Watch more of our Australian Storyteller Series in our video interviews with some of the great Australian storytellers who visit the Library.