What can we learn from the sentiment and imagery used to sell Australians of the past food, excitement and adventure? How are they reflected in the advertising images we still see today?

The National Library of Australia holds a vast number of late-19th and 20th-century Australian advertising posters that are now available to explore online. The collection features many famous brands and illustrators of the time, including Bushells, Ever Ready, James Northfield, Gert Sellheim and Norman Lindsay. 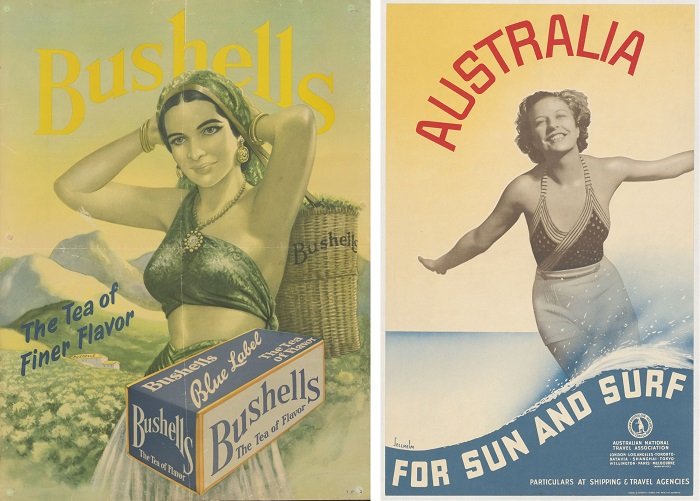 The lone, glamorously dressed Ceylonese tea-picker above was a feature of Bushells advertising over quite a long period in the early 1900s. Spending the day picking only the upper-most leaves of Camellia sinensis appears exotic, glamorous and thoroughly relaxing, and presumably this is the feeling we’re meant to believe is imparted when drinking a cup. Unlike other Bushells posters of the time, this one, mercifully, does away with the continued pun that regularly featured on her basket: ‘Bushells of flavour’.

Estonian-born Gert Sellheim also used a female figure as the focus of his poster for the Australian National Travel Association, albeit in a more familiar setting. Aimed at encouraging visitors from overseas, Sellheim famously portrayed our beaches and sunshine. This example showcases his signature technique of combining text, image and photomontage, which distinguished Sellheim from his contemporaries Percy Trompf and James Northfield. Sellheim went on to design the Qantas flying kangaroo logo, and his travel poster archetypes, focussing on beach culture and natural beauty, continue to be used by government agencies to promote Australian tourism today. 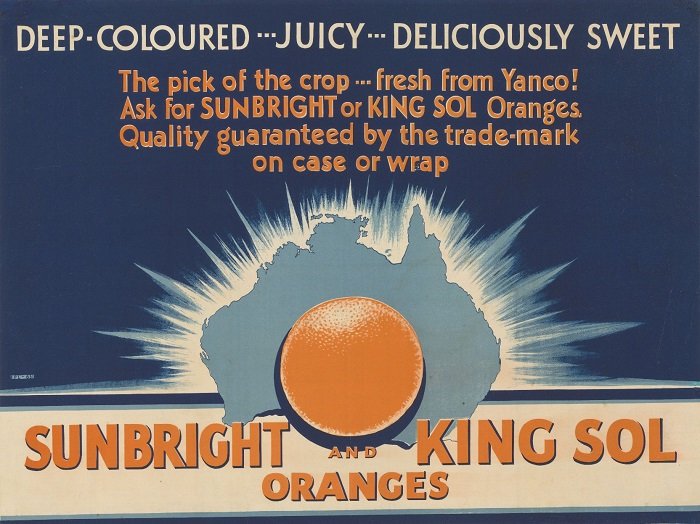 A prominent navel of a different kind is the highlight of a 1930s poster promoting oranges from Yanco, New South Wales. With colours and styling that are instantly recognisable as dating from the Art Deco period, it makes us wish that Sunbright and King Sol oranges were still available. Perhaps better known for wheat and barley these days, Yanco remains the largest vegetable-producing area outside the Sydney Basin, and so perhaps it’s time for the ‘Fresh from Yanco!’ slogan to make a return. At the very least, it would be less confusing than ‘Orange-grown black muscat grapes’. 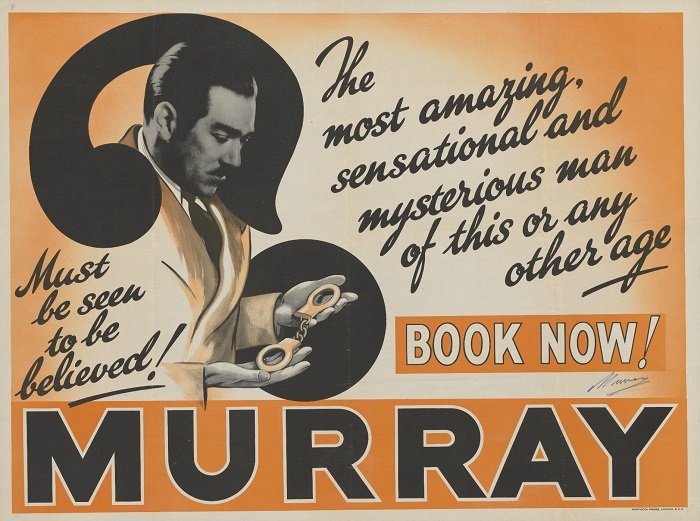 Murray: The Most Amazing, Sensational and Mysterious Man of This or Any Other Age (London: Perfecta Press, 1920s).

Billing Murray as ‘The most amazing, sensational and mysterious man of this or any other age’, perhaps the most mysterious thing about this poster from the 1920s is what exactly Murray did with those handcuffs – clearly too small for his wrists – or how you went about acquiring a ticket.

And while we’re examining mysteries, why does the Australian version of the Voodoo Tiger film poster depict Johnny Weissmuller as Jungle Jim, attempting to stab a lion? It appears that this was a rehash of the poster for Weissmuller’s previous film Tarzan the Ape Man, and our version substitutes this lionised tiger for the heavily stereotyped African who appeared on the American poster.

Previously, the bulk of this amazing collection could only be seen onsite at the Library in Canberra. The digitisation of these posters, thanks to generous support of our 2019 fundraising appeal, has unlocked these images and made them available to all Australians via Trove. Take a digital break and explore the images used to sell Australians products, travel and excitement from a time when advertising really hit its stride in Australia.

Use our finding aid to explore digitised Australian advertising posters through Trove.