The National Library of Australia’s greatest treasure is its staff – although a slightly waterlogged journal written in the hand of one J. Cook, would have to come a very close second.

So when you ask National Library staff about what particular gem they have uncovered in the 10 million-item strong collection, you know they’ll come up with something special - and unexpected.

For Family History and Newspapers Librarian Shannon Sutton, it was an 1861 shipboard newspaper with the sort of ads that showed even the crustiest old seafarers had a heart. The Mercury newspaper was printed aboard the Saldanha, en route from London to Moreton Bay in Queensland and featured this heart-breaker of an ad: ‘Lost by a Young Man, a Heart: was quite safe leaving the Docks. Wanted, a substitute for the Above …’.  Or the one placed by Miss Eily O’Connor looking for a husband, lobbed right above a special offer for manure. Here's hoping Miss O'Connor and a Young Man found themselves - nowhere near the manure. 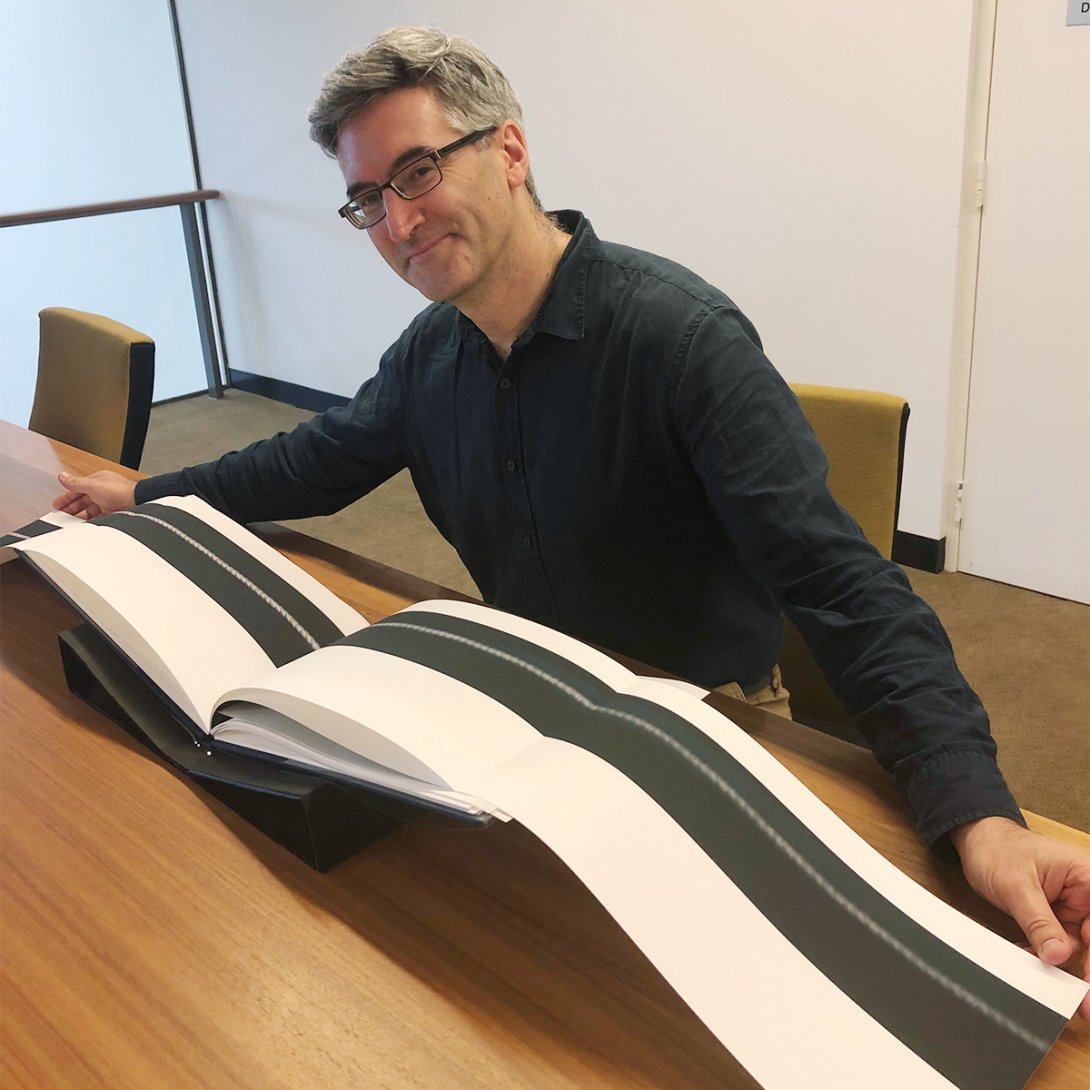 And the love story continued when we asked our newly minted Director of Philanthropy, Conor McCarthy, about what he had fallen for in the collection. He didn’t have to dig deep to come up with Fathom, an artist’s book created by his partner Deidre Brollo in 2013. For Conor, finding such an item in the collection not long after starting work here was beyond special. ‘It was so wonderful to go somewhere new yet see such a familiar face’. (Familiar, apparently, because the book had spent months on the couple’s lounge room table whilst finishing touches were made.) The remarkable book/work of art looks at the precarious nature of sea voyage.

Tariq Yussouf didn’t have to venture far, either, to see his favourite item – just down three floors from his office in the Finance Branch to the Treasures Gallery on the Ground Floor. For Tariq, who came to Australia from Bangladesh in 2000, his treasure is An Account of the State of Agriculture and Grazing in NSW, published in 1826 – believed to be the first known book of Australian agriculture. The book provides advice to new settlers – what to grow, where and how in the new colony. ‘I’d like to have my own farm one day,’ Tariq said. ‘Retire somewhere in the country with a warm climate where I can grow my own food just like the people who read this book.’ 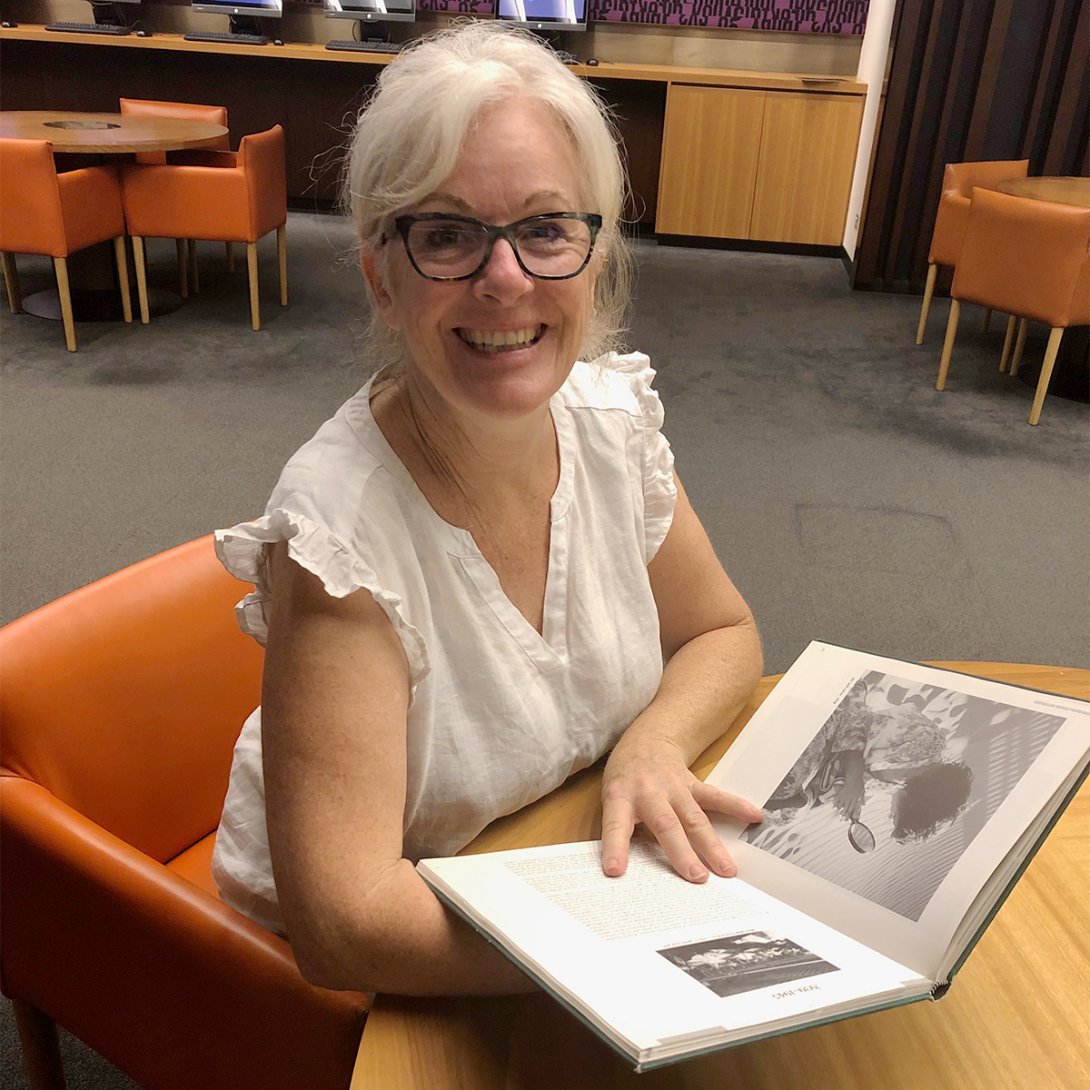 Resistance and Renewal: Australian Women Photographers and the Representation of the Female Body by Jackie Deane, 1996

For Hilary Wardhaugh from the Digitisation team, naming the best thing she has uncovered in the National Library's collection was also a snap. Literally. It’s the 1996 edition of Resistance and Renewal: Australian Women Photographers and the Representation of the Female Body by Jackie Deane. ‘I uncovered this book by looking through Trove,’ she said. ‘I was doing some research about early women photographers and to find such a selection of material was amazing. I love this book because it is a tangible record that women photographers really did exist – and flourish in our early years.’

Romina Villanueva, from the Trove team, selected perhaps the item in the collection that takes up the least space. A reproduction of the miniature atlas made for Queen Mary’s dollhouse – all 4cm of it complete with readable - although it helps if you have a magnifying glass - maps. The tiny atlas features maps of all the major countries, although reproduced in a minor fashion. 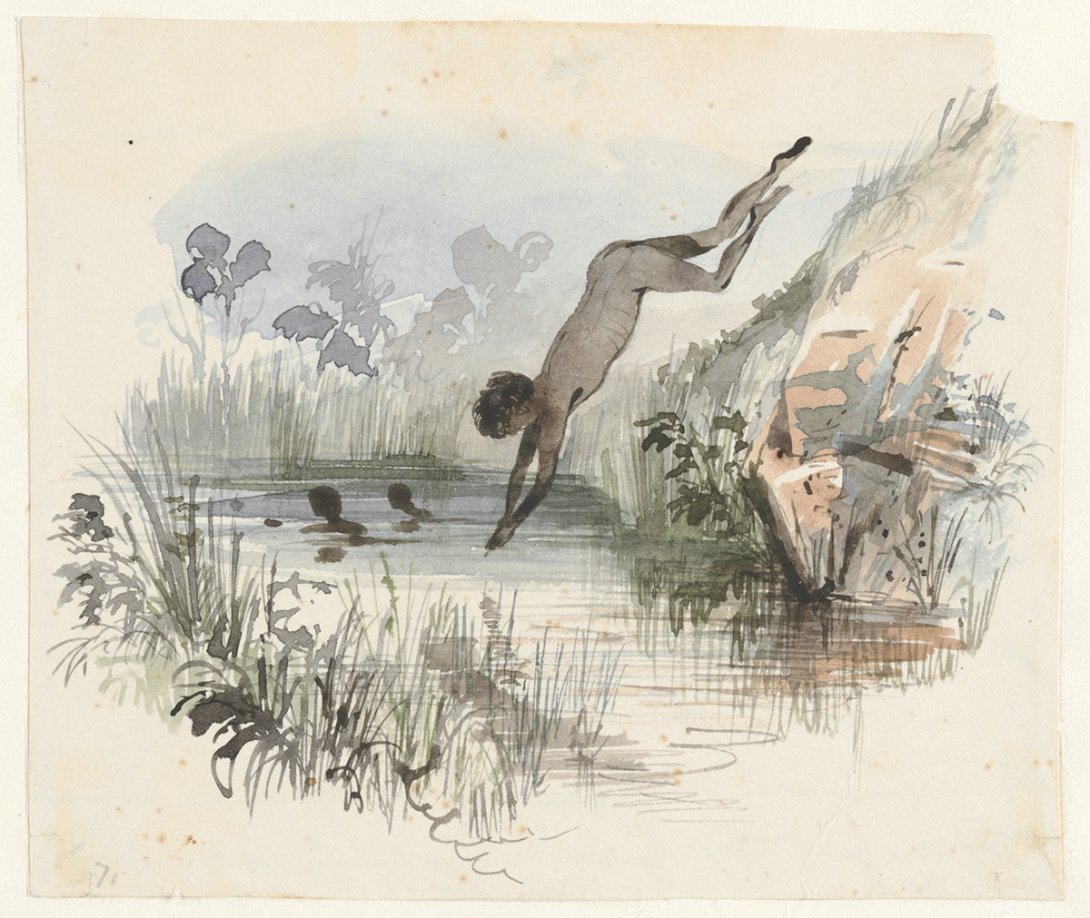 Many staff members admitted that they uncovered what was to become a favourite whilst looking for something else. Indigenous Curator  Rebecca Bateman was looking for an image to best illustrate a Cultural Awareness program she was preparing for staff. ‘Painters often made Aboriginal people look uncomfortable in their pictures,’ the Weilwan and Gamilaroi woman said,  ‘and I didn’t want that.’ Rebecca chose a watercolour by ST Gill, Aboriginal Australians Diving and Swimming because, she said, ‘it showed Aboriginal people as they really are - happy, having fun.' 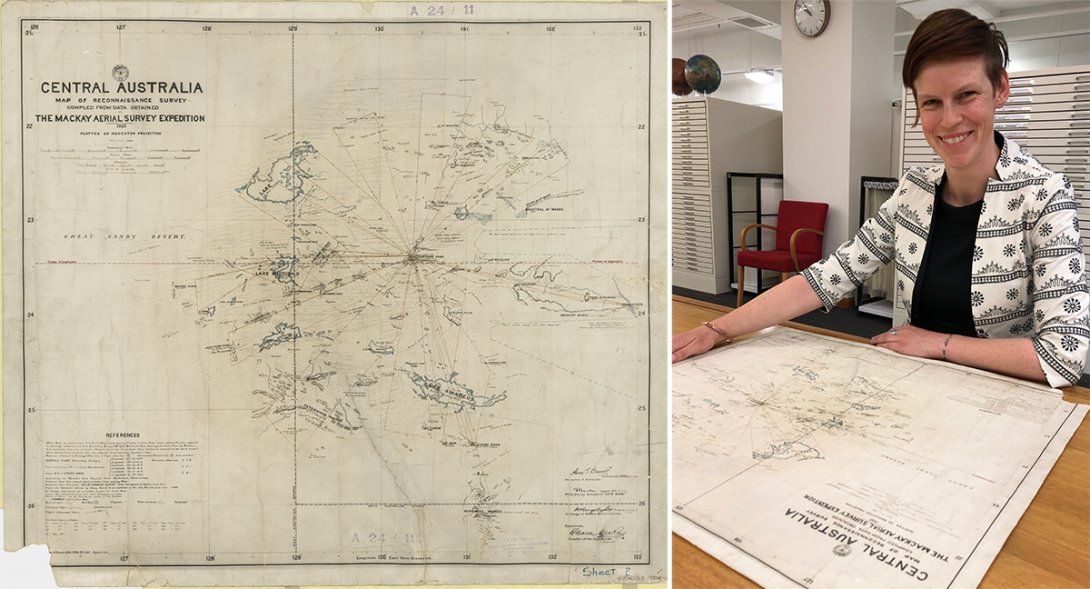 For Susie Russell, who works in the Maps Branch, romance was in the air, literally, when it came to her favourite item in the collection. It’s a 1930s aerial reconnaissance map, commissioned by entrepreneur Donald Mackay to survey a huge tract of desert country north of the Alice. Yes, the map was fabulous, complete with signatures of all involved, some remarkable annotations from people who were there – but all it took for Susie to be smitten was to discover that the biplane used was called, wait for it, the Love Bird – and the radio operator was one Mr Kingsley Love. There was even another reason to love Mr Love – he also held a pilot’s licence too, just in case things went well, not lovely. 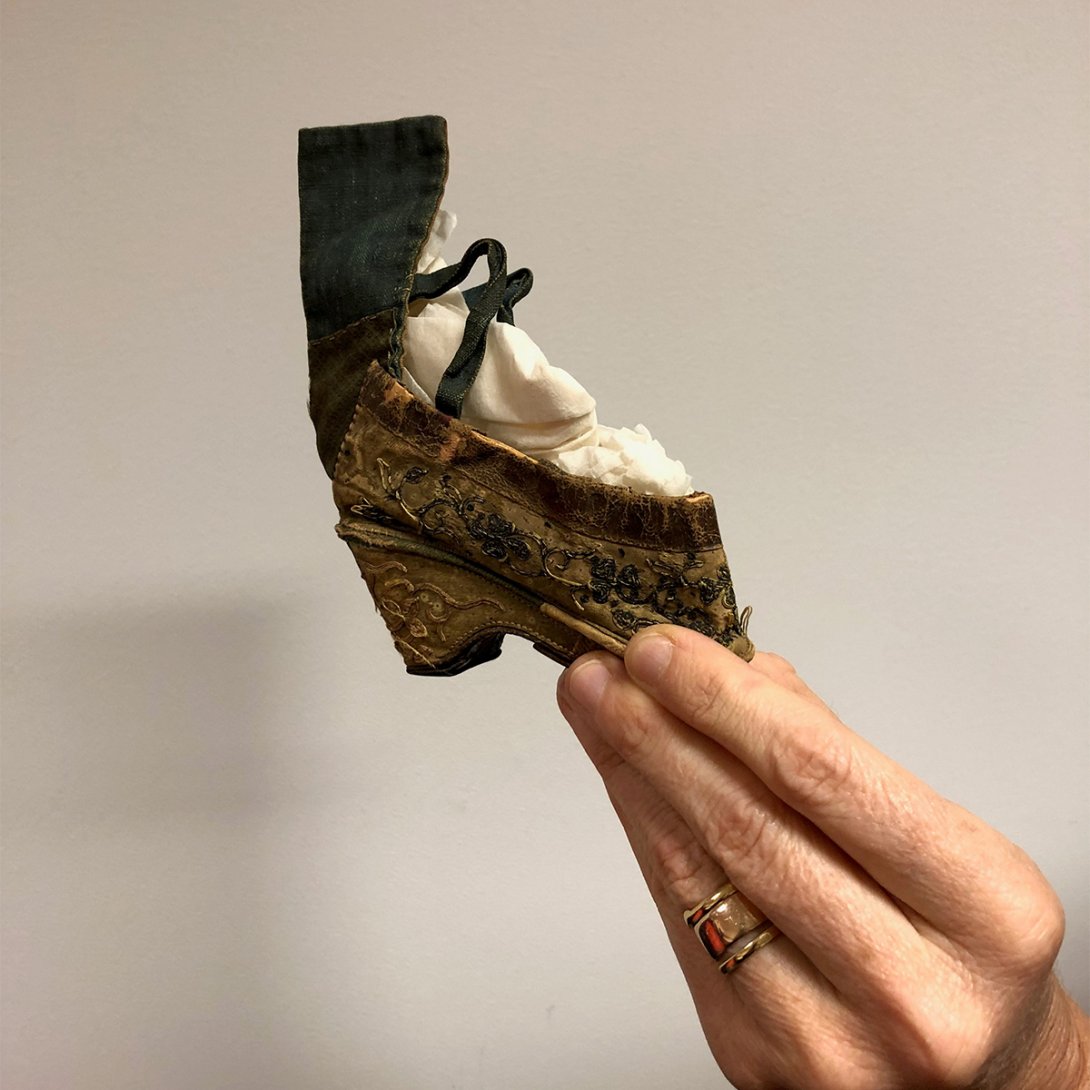 Not all the chosen collection items told the best of stories. Ephemera officer Fiona Spooner chose a tiny, decorative Chinese lotus shoe, circa 1850s, which both intrigued and haunted her. It’s believed to be the sort of shoe worn by Chinese women in the era of foot binding which, at the time, was associated with  beauty, status and marriage eligibility. ‘I have been intrigued by this cultural tradition since first reading about it in the book Wild Swans,’ she said. The mystery, though, is why it’s in the National Library's collection. The scant information on its catalogue record says only that it came into the collection with a pair of glasses. 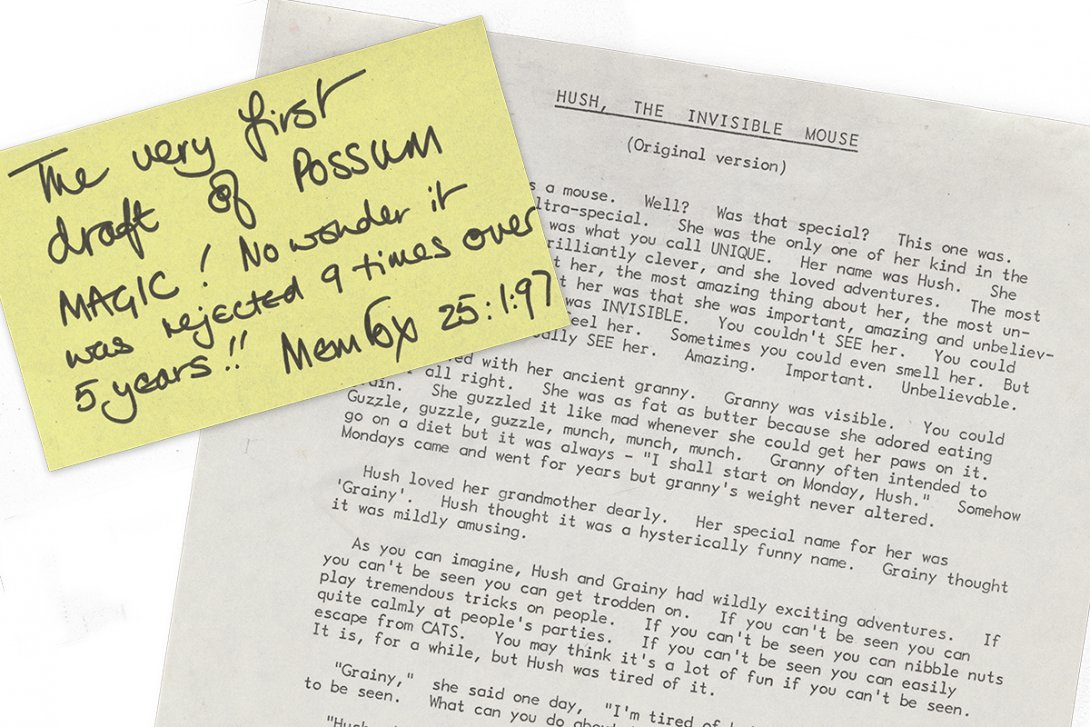 It was her love of words – and furry Australian animals – that drew editor Katherine Crane to a little note attached to the first draft of Mem Fox’s classic book, Possum Magic. It says: ‘The very first draft of Possum Magic! No wonder it was rejected 9 times over 5 years!! Mem Fox 25:1:97. ‘Authors like Mem Fox really are an editor’s dream,’ Katherine said. ‘Despite it being rejected nine times, she could see the way ahead to  pare it back but not lose the story. ‘It’s what I aspire to as an editor- to see the magic in words and make them shine.’ Hear Mem Fox talk about her life and work on this National Library Oral History. 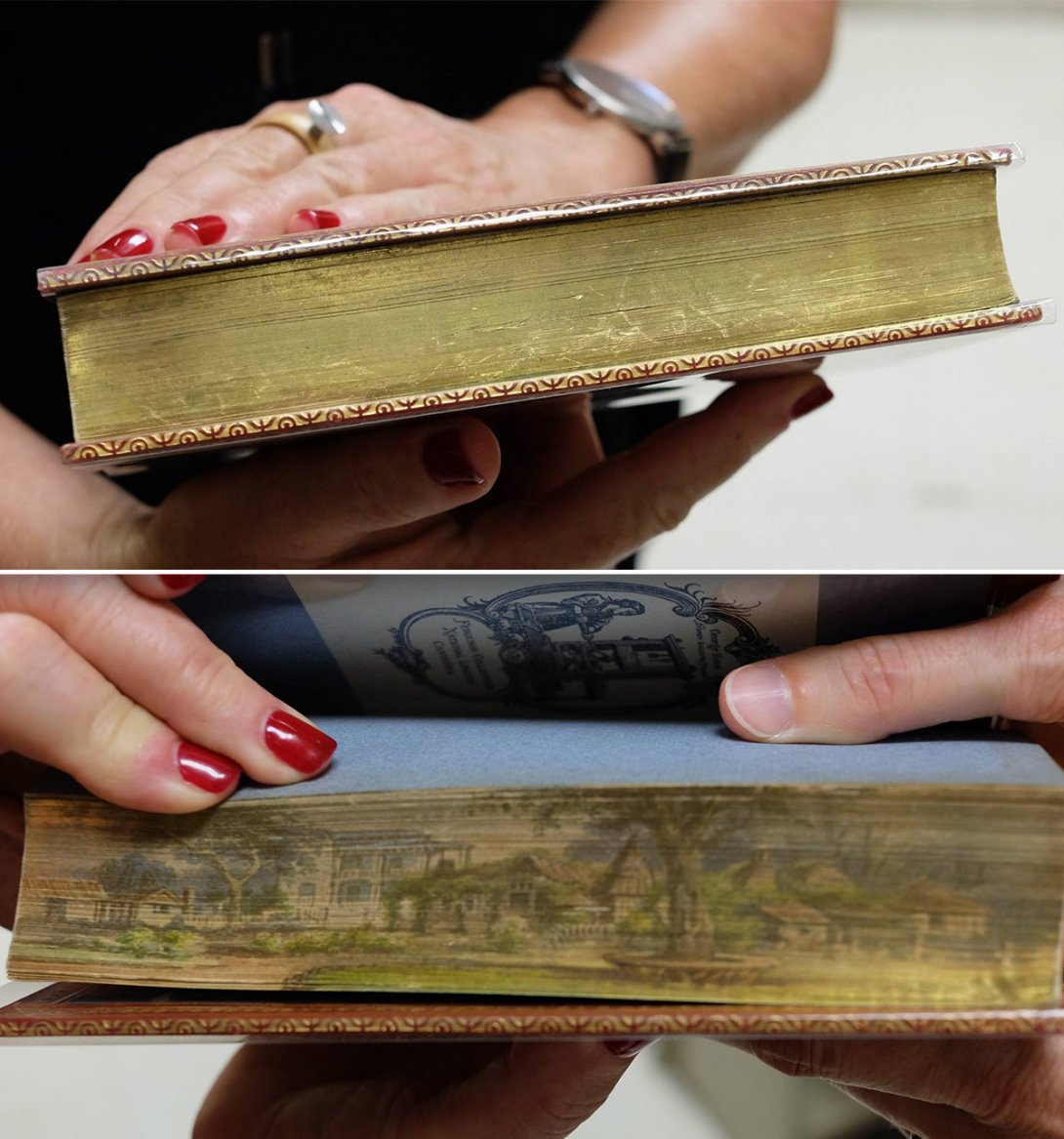 When it comes to treasure hunting at the National Library, few come close to Stackie Angie Brauns. Part of a small but dedicated team, Angie’s job is to prowl around the underground stacks of the building tracking down collection material requested from above. So when asked what her favourite item was in the collection, it had to be an 1854 book which she had been initiually told wasn't a book. It also boasts one of the longest titles in the collection – The three colonies of Australia: NSW, Victoria, South Australia: their pastures, copper mines and goldfields . The book features a rare fore-edge painting– a scene painted on the edges of the pages of a book. 'I discovered it when someone requested  it – they thought it was a painting. I’d never seen anything like it before,’ she said, flicking the pages of the book which transforms it into the work of art. 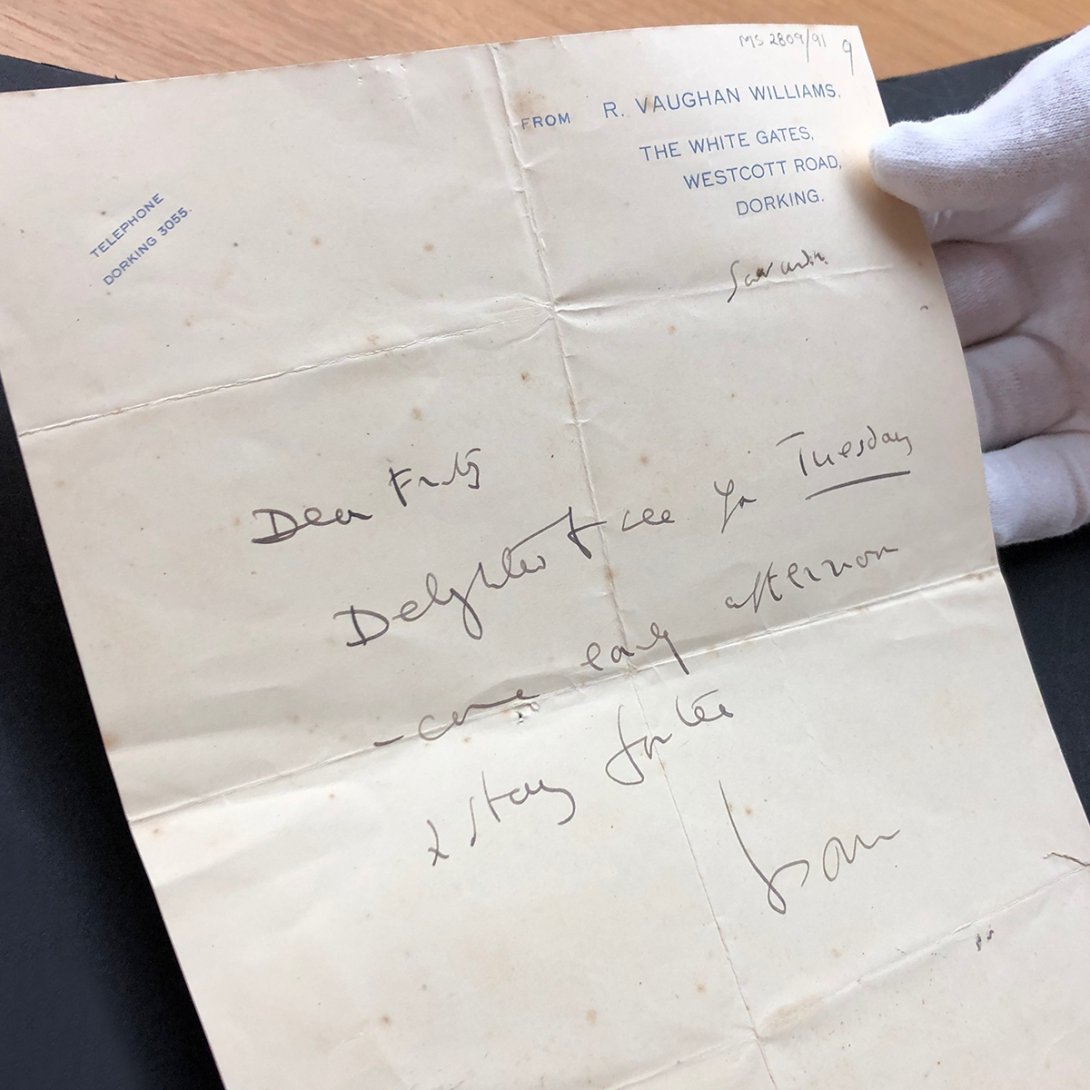 There was an afternoon tea back in 1936, a bit of a commute away (read: other side of the world in Dorking, England – where the phone numbers were a handy four digits) - that Matthew Stuckings, from the Newspaper Digitisation Branch, would have probably sold off a close relative to attend. Details were in a note from composer Ralph Vaughan Williams to colleague Fritz Hart, held in the papers of Fritz Bennicke Hart 1898-1951.

A musician himself, Matthew uncovered the scrap of a note in Hart’s papers buried in the Manuscripts collection. So what would be the tea-time talk? ‘Football,’ joked Matthew. ‘No, I’d love to get him to talk about his music, but I think he’d be reluctant to do so. So I’d probably get him to talk about someone else’s music.’

Within the National Library, Hazel de Berg is a bit of a legend – not just because she takes up the most shelf space in the Oral History branch – she recorded 1300 interviews with famous and not-so-famous folk during her long career. But because of the Australian stories she collected as one of this country’s best interviewers. For Mark Piva, who works in Oral History, it’s not only the recordings themselves that tell the de Berg story, it’s her first tape recorder which her family gave to the National Library on her death. It’s a huge, clunky reel-to-reel that Hazel lugged around the country for the best part of her working life. ‘This machine,’ Mark said, ‘ gave birth to a new way of recording  history in this country. Her recordings put you directly in touch with the most amazing people, yet she never put herself into the interview. Apparently she hit the pause button so the recording wouldn’t capture her voice.’ 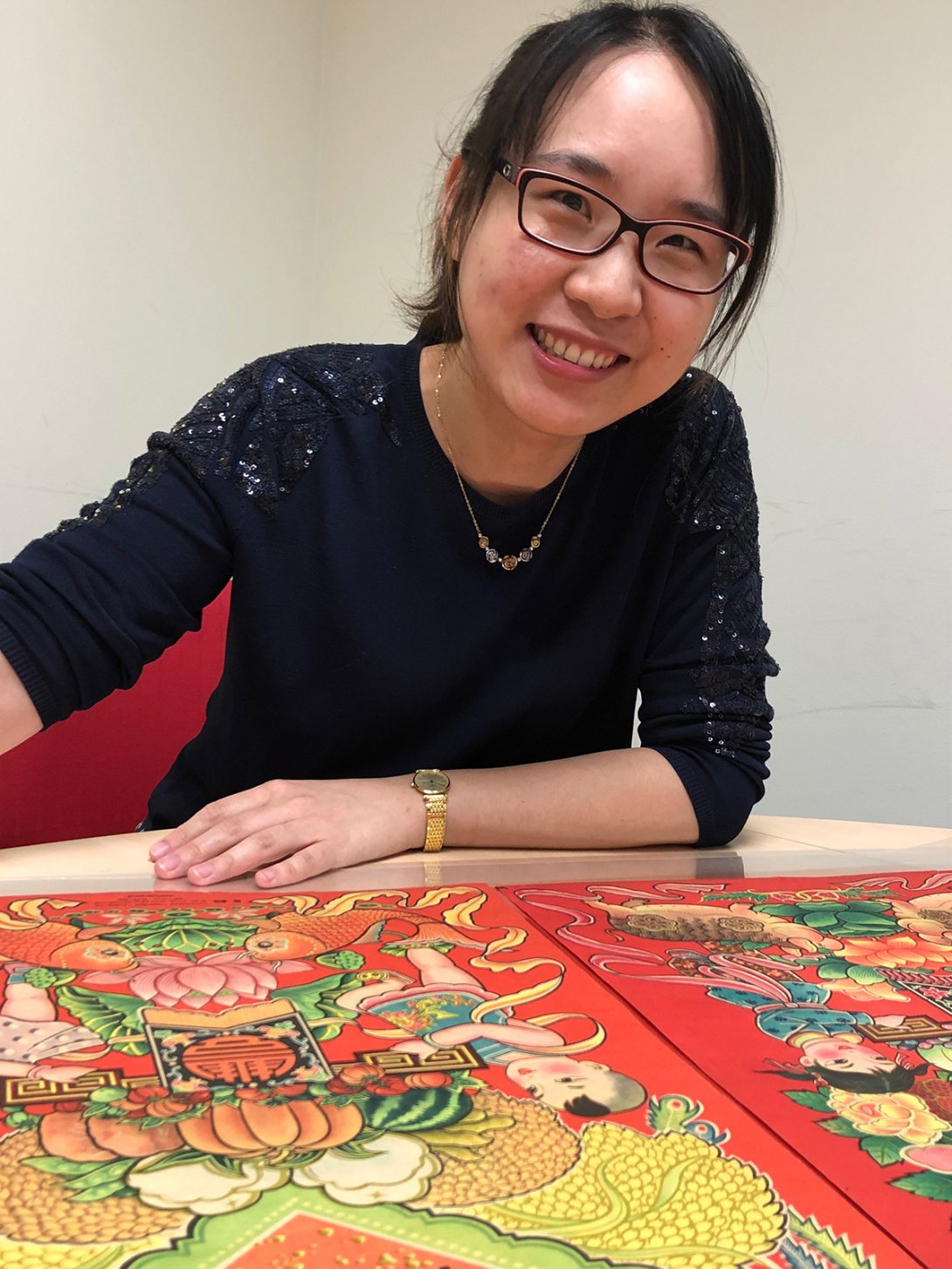 Deep in the stacks of the Asian Collection, librarian Bing Zheng uncovered four posters that couldn’t help but make her smile. They were four Chinese New Year posters, made in Guangdong in 1961, featuring the brightest of colours and the ripest of fruit. ‘For Chinese people,’ Bing said, ‘these posters show great prosperity. The people are smiling, the children happy – and look at the wonderful things people produce.’ Bing said the Library acquired the posters from an Australian in Hong Kong who was interested in Chinese life during the 60s and 70s. ‘It’s actually quite rare to find non-political posters like this celebrating the New Year – that’s why they’re so special.’ 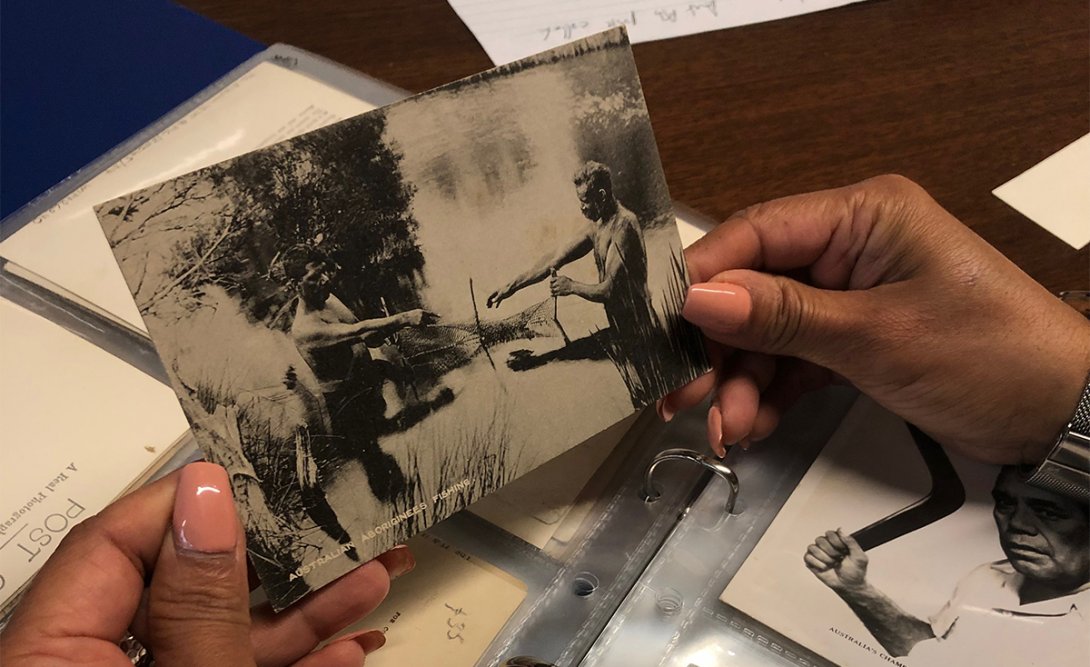 When Bushra Khanum was a child growing up in rural Bangladesh, one of her joys was to sit with her grandparents as they cast their fishing nets out into the stream in front of their house. Bushra, who works in the Pictures and Manuscripts Branch, said vivid memories of this childhood flooded back when she uncovered a collection of Aboriginal postcards whilst working with a curator on a photography project. One postcard in particular struck her instantly. ‘It’s a picture of two men fishing with nets – it made me think of my childhood straight away. Even the fishing tools looked the same. ‘Something about this picture makes me think of those good times when I was a child – that’s why it’s so special to me.’

Be part of the story. Uncover something new in our collection and share it using #LibraryLoversDay

Library Lovers Day 2020 is organised by the Australian Library and Information Association.