NLA Publishing's latest children's book, The Last Dragon, is written by Charles Massy with illustrations by Mandy Foot. It tells the story of Timpo a dragon-lizard who lives in the grasslands of Narrawallee, where he wonders if he is the last dragon in the valley. With his good friend Wolfie the spider, he embarks on a long and dangerous journey in search of others of his own kind.

Timpo is a Monaro Grassland Earless Dragon, one of Australia's rarest reptiles, which was considered extinct for most of the twentieth century. Charles Massy has prepared the following essay, sharing more information about the history of this curious little creature. 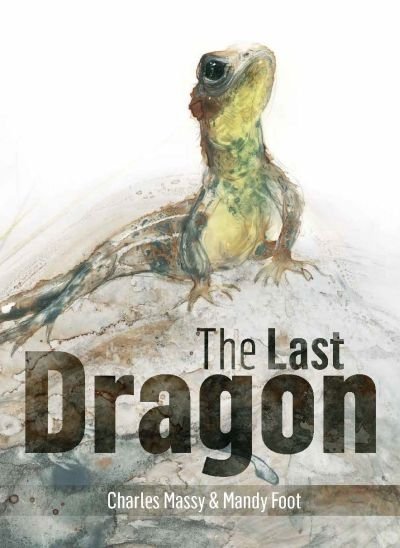 It is small, weighing between six and nine grams, and has a very short lifespan. It lays only three to six eggs once a year, just under the ground where the sun can warm them. These egg beds can dry out or be disturbed by animal hooves, machines or predatory insects like spiders. Whole local populations can suddenly disappear, like in Timpo’s valley.

The dragon’s numbers have been severely impacted by habitat damage and loss. Open grasslands, like those of Narrawallee, have been overgrazed by sheep and cattle, and damaged by ploughing and other farming and building activities.

Prior to the arrival of European settlers, and perhaps for more than 20,000 years, the Ngarigo Nation were the custodians of the Monaro grasslands. They regularly burnt the grasses where the dragon lived, managing the land carefully and skilfully to promote a sustainable food supply (including perhaps the occasional dragon). This maintained the health and diversity of the grasslands – and the fauna living within them.

Captain Mark John Currie was one of the first Europeans to alert settlers to the rich and diverse Monaro grasslands. On 1 June 1823, he recorded in his diary: ‘passed through a chain of clear downs to some very extensive ones … From … natives we learned that the clear country before us was called Monaroo’. After this visit, the European settlers arrived and ‘took up’ country. The destruction of the Monaro grasslands started with the beginning of this settlement.

The problem was that the Australian climate – highly variable, with frequent droughts – and the ancient, coevolved vegetation and generally poorer soils were vastly different to those in north-west Europe and Britain where the settlers came from. Polish explorer Count Paweł Strzelecki delivered a report to Governor Gipps in 1840 about his brief travels through the Monaro. He told Gipps that the effects of the drought at that time were not just due to the climate and over-burning of the grass by squatters, but to

the alteration which colonisation impresses on its surface; the herbaceous, high and thick plants … which so well clothed the crust and sheltered the moisture, have disappeared under the innumerable flocks and axes which the settlers have introduced. The soil, thus bared, was and is … abandoned … The disturbance … extends the dryness of the soil, augments its aridity

That is, poor management from over-grazing by sheep and cattle was the destroyer of both grasslands and grassy woodlands, and therefore of the Monaro’s plant and animal biodiversity.

In his famous book, Discovering Monaro. A Study of Man’s Impact on His Environment (1972), historian W.K. (Keith) Hancock was able to document this ‘impact’ of European mismanagement. His extraordinary research notes and papers for the book reside in the archives of the National Library of Australia.

Hancock revealed that, upon the arrival of European settlers, the native fauna was so abundant that they regularly shot lyrebirds and other, now rare, animals for sport. Scottish visitor Farquhar McKenzie noted in his diary of 1837 that: ‘When out shooting duck at Bredbow river I saw a number of those curious animals the Platibus and fired at them repeatedly’.

However, it was the overgrazing by sheep and cattle that continued to degrade the diverse flora and fauna of the Monaro grasslands – especially in drought times. This is graphically captured in a vivid recollection by Monaro settler William Crisp, whose records Hancock discovered. Crisp recalled:

Before the passing of the Land Act [the Robertson Land Act of 1861, which in places like the Monaro led to overstocking] … the Matong Creek for about five miles … was a succession of deep waterholes, there being no high banks, and grass grew to the water’s edge. Hundreds of wild ducks could be seen along these waterholes, and platypus and divers were plentiful. Five years after the passing of the Act the whole length … became a bed of sand, owing to soil erosion caused by sheep … the best grasses for cattle disappeared … I have seen the kangaroo grass, when in seed, like a field of wheat three feet high. This disappeared, as also did many of the wild birds, including the duck and the turkey [the Plains bustard, a grassland bird]

As Hancock concluded: ‘there is nothing good to be said about what the squatters did to the pastures. In Monaro as elsewhere, they made one blade of grass grow where two had grown before’.

However, despite nearly 200 years of overgrazing, the Monaro grassland earless dragon did not become extinct.

These dragon-lizards were first discovered by scientists in 1907 when two specimens were collected and sent to the Australian Museum in Sydney. They were then considered extinct until the late 1980s when another scientist, Dr Will Osborne from the University of Canberra, found them again on the Monaro (which is why this little dragon is named after him).

Today, the dragon, a grassland specialist, remains close to extinction. It is placed very high on the endangered species list for Australia, and is one of the most endangered reptiles in the world. Fortunately, with the help of scientists, landholders like my family are implementing ecological grazing practices. At our farm, we also work with land manager Rod Mason, an Elder of the Ngarigo Nation, incorporating traditional Indigenous land management practices into our attempt to preserve healthy temperate grasslands for Timpo and his kind. We all must do what we can to save these beautiful, cheeky, yet rarely seen, little animals!

Charles Massy holds a Bachelor of Science (Zoology, Human Ecology) and PhD in Human Ecology from the Australian National University. He has managed a sheep and cattle property for 40 years, during which time he has researched and lectured in regenerative landscape management, addressing climate change and the current global ecological challenges for our planet. Charles has authored several books and was awarded an Order of Australia Medal in 2011.

The Last Dragon is published by NLA Publishing. Available from the National Library Bookshop.

Want to know more about how this book was created? Illustrator Mandy Foot tells us about how she learnt about and painted Timpo and his friends.