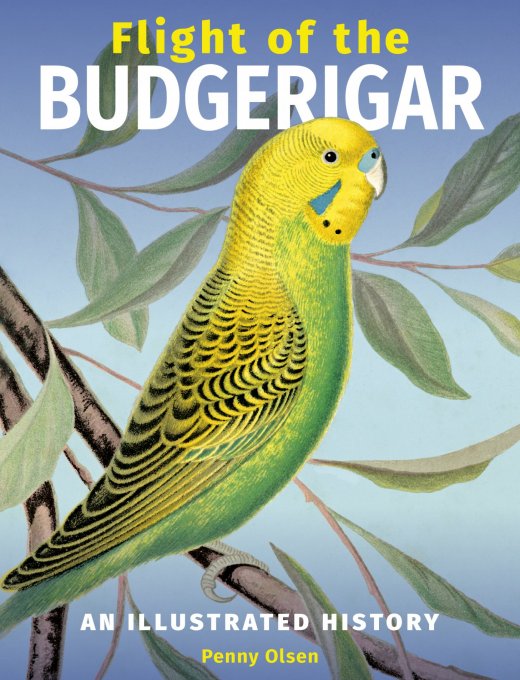 The Budgerigar is arguably Australia’s best-known bird. At the same time, it is so ubiquitous that not everyone knows that it is Australian. Nor do many realise that the multicoloured bird that comes to mind—not to mention today’s super-sized, extravagantly coiffed show budgie—is as different from the free-living original as a chihuahua from a wolf.

Far from the cosy domestic lives our pet budgies live today, the native budgerigar has lived millennia of boom-bust cycles in the arid inland of Australia. Life was often short; if they were not fodder for predators, they starved or had to struggle their way to districts closer to the coast. For the Warlpiri and their Arrernte neighbours around Alice Springs, the Budgerigar (in its ancestral form) was a totem animal, featuring in art, ceremonies, songlines and legends.

Since 1840, when ornithologist John Gould took living specimens to London, this little parrot has been on a remarkable journey. The Budgerigar was Australia’s first mass export; its story includes British queens and nobles, Japanese princes and Hollywood stars. It has won the hearts of British spies and world leaders, including Churchill, Stalin and Kennedy.

Taking the reader from the Dreamtime to the colonial live bird trade, the competitive culture of the showroom and today’s thriving wild flocks, Flight of the Budgerigar is the authoritative history of the Budgerigar, written by respected ornithologist Dr Penny Olsen, and lavishly illustrated in full colour.

Penny Olsen is an Honorary Professor in the Division of Ecology, Evolution and Genetics at The Australian National University. After a career as a field biologist and ecological consultant, she has is now mostly occupied writing books about Australian natural history and its recorders, both artistic and scientific. She has written more than 25 books, including Australian Predators of the Sky (2015) and Australia’s First Naturalists: Indigenous Peoples’ Contribution to Early Zoology (2019).