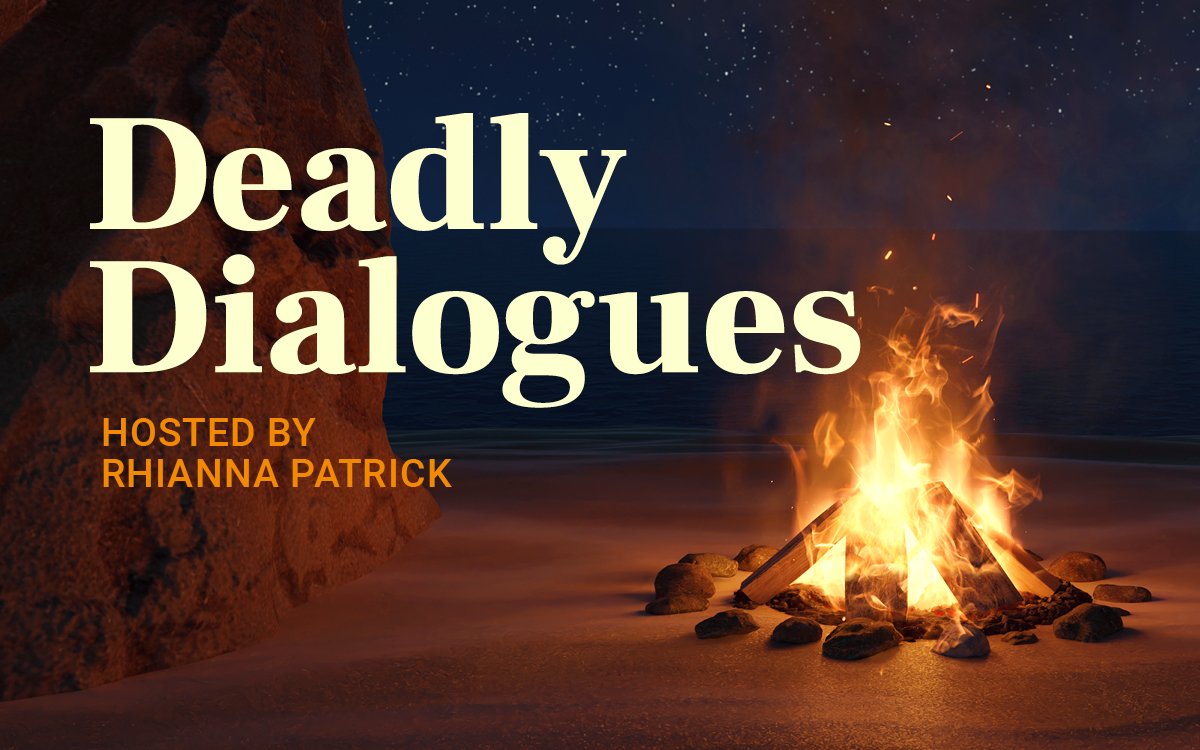 The first Deadly Dialogue features special guests Tammi Gissell & Yolanda Lowatta and takes place on Thursday 19 May from 6pm to 7pm. Entry is free but bookings are essential.

Deadly Dialogues is a new series of in-conversation style events hosted by Rhianna Patrick. Created as an extension of the current On Stage: Spotlight on Our Performing Arts exhibition – a celebration of performing arts in Australia – Deadly Dialogues is a chance to hear firsthand experiences from First Nations performing artists that have told stories On Stage, through everything from body language to the oldest living languages in the world.

With On Stage showcasing musical scores from Pecan Summer by Deborah Cheetham AO, poster for Bangarra’s first full length show Praying Mantis Dreaming and portrait of trailblazer Bob Maza who co-founded the National Black Theatre of Australia, this is a wonderful opportunity to hear from the people behind those objects.

From stories passed through generations to stories of today, we invite you to join us in hearing from a range of First Nations performing artists as they bring On Stage to life.

Yolanda is a Geidei woman, born on Thursday Island and grew up in Mackay. Her family come from Yam Island in the Torres Strait and is also of Papua New Guinean and Fijian heritage. In 2016 Yolanda was awarded a Helpmann award for Best Female Dancer in a dance or physical theatre. During her four years with Bangarra Dance Theatre Yolanda danced nationally and internationally. She was also a part of Ochre Contemporary Dance Company in 2014.

Moving to Brisbane in 2011 Yolanda graduated from The Aboriginal Centre for the Performing Arts (ACPA) in 2013. Her arts credits include MABO directed by Rachel Perkins, Stolen directed by Leah Purcell and Up The Ladder directed by Wesley Enoch and choreographed by Penelope Mullen.

After leaving Bangarra Yolanda has danced for Yt dingo, Cairns Indigenous Art Fair, Darwin Aboriginal Art Fair and from 2019-2021 she danced with Jannawi Dance Clan. Yolanda choreographed and performed her own solo named As I Am in the 2022 Bold Festival along with a workshop in Torres Strait Contemporary and has done some roving work with Little Dove Theatre Art and Australian Dance Party. Yolanda has ventured into teaching dance with Austinmer Dance Theatre, Brolga Dance Academy, Classical Ballet Centre Canberra and QL2.

Tammi Gissell is the Collections Access Coordinator, First Nations at the Museum of Applied Arts and Sciences (Powerhouse Museum) in Sydney, NSW. She is a Muruwarri woman born ‘out the back of Bourke’ in North-West NSW.

She is also performer, poet, performance theorist, choreographer, researcher and critic; having performed, lectured and consulted regionally, nationally and internationally across the spectrum of contemporary & contemporary-Indigenous performance since 1996.

She has worked for many years in cultural and educational institutions as program coordinator, producer, assessor, compliance officer and team leader. Prior to her current role, Tammi led the Aboriginal and Torres Strait Islander Assessment Team for the Collection, Relocation and Digitisation Project for the new Powerhouse Parramatta.

She holds a Bachelor of Performance: Theory and Practice (Honours) from the University of Western Sydney (UWS); was inducted into the Golden Key International Honour Society for achievements in performance theory in 2004 and later graduated Deans' Medallist and Reconciliation Scholar in 2005.

She has sat on the Australian Tertiary Dance Council, the BlakDance First Nations Dance Panel & the National Dance Forum. She has presented at National Film and Sound Archives for the Black Chat series and completed Choreographic commissions for OCHRE Dance Company, Canberra Dance Theatre, Ausdance, the Canberra International Music Festival and throughout 2017 was Education Coordinator/Artist with The New Zealand Dance Company.

Tammi continues to ‘perform the theory’ in 2022 with her solo dance practice as well as through her collaborations and consultancies with various dance and theatre projects.

Rhianna Patrick is a Torres Strait Islander journalist and broadcaster with almost 25 years’ experience. She spent nearly two decades at the ABC and currently divides her time working between Indigenous media company, IndigenousX.com.au and other freelance projects.

Each month, Rhianna curates one of Spotify's Indigenous playlists, Original Storytellers and also co-curated the Queensland Museum's major Torres Strait Islander exhibition, Island Futures: What Lies ahead for Zenadth Kes which is open until April 2022.