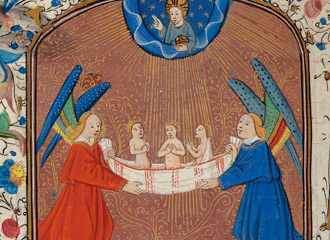 The Commendation of Souls in Book of Hours  c. 1450 (Use of Sarum), Southern Netherlands, ink, pigment and gold on parchment, CLIFFORD COLLECTION (MANUSCRIPTS)

Books of Hours, prayer books for private devotion, were very popular in Europe from the thirteenth century. This example was no doubt made for an English patron, possibly in Bruges or Ghent, then centres of illuminated manuscript production. This full-page miniature shows the raising of the dead to Heaven, illustrating the text of a sequence of psalms together known as the Commendation of Souls. 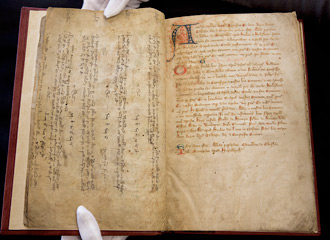 This important cartulary, a compendium of historical and business records, is one of five to survive from the English Benedictine abbey at Chertsey in Surrey. The abbey was dissolved by Henry VIII in 1537 but the volume dates from the abbey’s prime under Abbot John of Rutherwick. It is the abbey’s record of its history, including copies of documents and charters. Some earlier abbey accounts—the only extant examples—were used in the original binding. 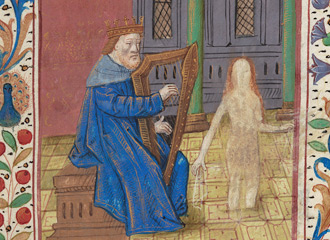 French Books of Hours often used the biblical story of Bathsheba—wife of King David and mother of Solomon—to accompany a sequence of psalms. David killed Bathsheba’s husband, Uriah, so he could marry her. Bathsheba is often depicted nude and as a temptress. In this Book of Hours, someone has taken their wrath out on Bathsheba, likely with a wet finger, and dissolved the paint. 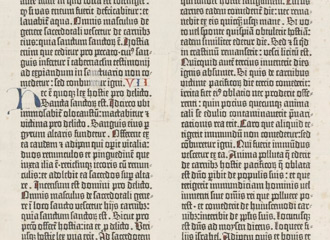 The printing of the Gutenberg Bible was a pivotal moment in the history of the book. It was the first major book printed with moveable type in Europe. About 180 Gutenberg Bibles were printed, on both vellum and paper, yet only around 48 survive, 23 complete. 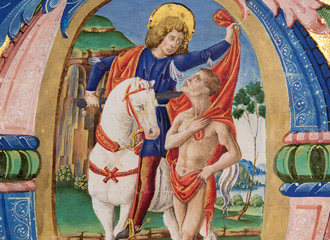 This illumination—a historiated initial, a scene within a letter—was cut from a large antiphonal, a volume used by medieval and Renaissance choirs.  It shows the fourth-century St Martin of Tours, who shared his cloak with a beggar. The image appears within a letter ‘O’. 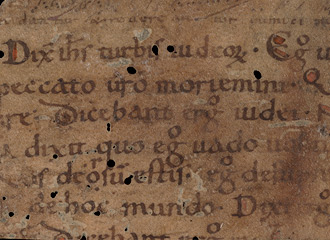 Over 1,000 years old, this is the oldest manuscript in the Library’s collection. Of English origin, the writing is Caroline minuscule, a rounded script widely used throughout Europe for centuries and favoured for its legibility. Some of these letters, however, are formed in ways more characteristic of earlier British manuscripts. 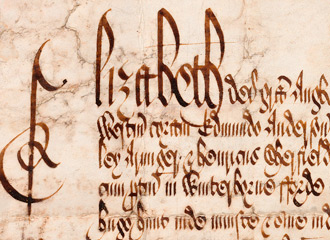 In sixteenth-century England, legal documents could be very impressive. Written on parchment, with a wax seal, this deed lays out what was resolved before the Chief Justice of the Court of Common Pleas. Elizabeth was on the throne at the time. 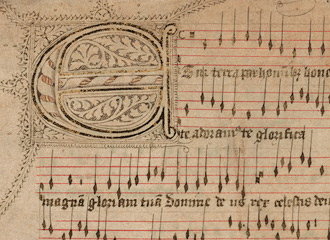 This is one of a few surviving fragments of a manuscript choirbook believed to have been used in a royal chapel in King Henry VI of England’s reign (1422–1461). Several other fragments have been found in the bindings of books now held in British libraries. Nicholas Spierinck, a Cambridge bookbinder of the early sixteenth century, possibly acquired the choirbook, and used it as binding material. 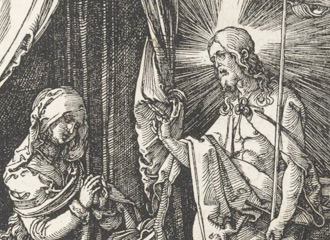 This book—which tells of the life and suffering of Christ—was printed within a few years of the Rothschild Prayer Book. Albrecht Dürer is commonly regarded as the most important artist of the Northern Renaissance. His specialty was printmaking, particularly woodcuts, and he was ambitious and innovative in his work.