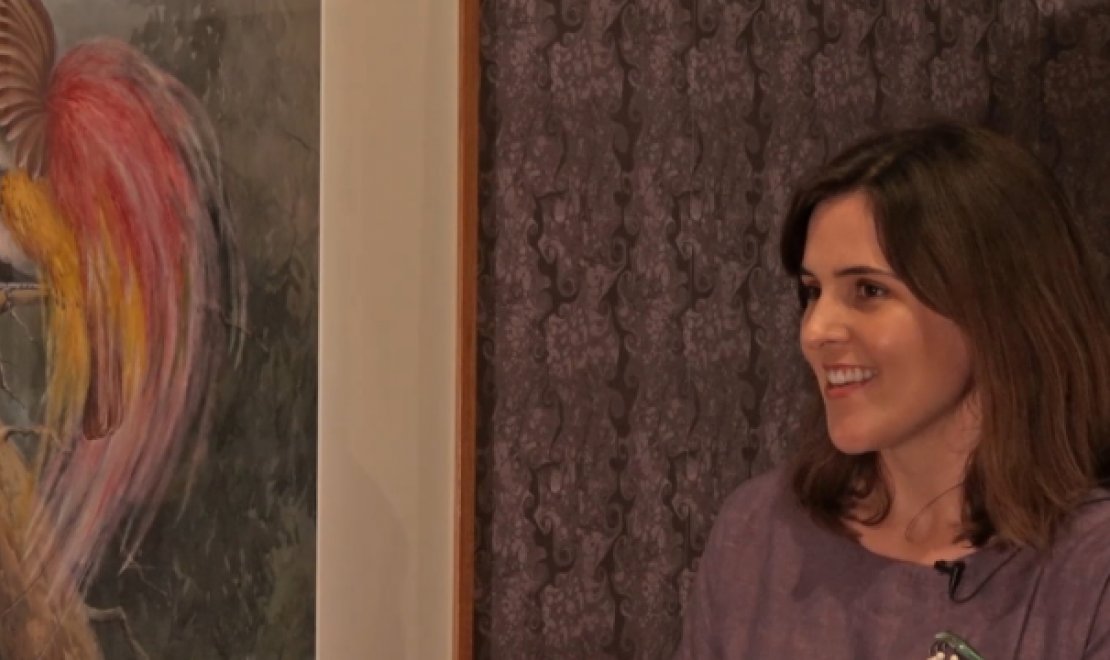 Best known for her striking wildflower paintings, Ellis Rowan also had an interest in birds and produced a stunning collection of New Guinea's Birds of Paradise (Paradisaeidae) in circa 1917.

This must-see exhibition is on now and also viewable online, showcasing 13 of Ellis Rowan’s most exquisite watercolour paintings of Birds of Paradise. Also on display are a selection of plate designs featuring smaller representations of the Birds of Paradise and other biographical items relating to Ellis Rowan.

G:        Hello, I’m Guy Hansen, Director of Exhibitions here at the National Library of Australia. I’d like to acknowledge the traditional owners of this land, Australia’s first nation’s peoples and pass my respect to the elders, both past and present.

Today we’re in the Treasures Gallery and we’re going to go on a tour of our new exhibition, Birds of Paradise, Ellis Rowan in New Guinea with Dr Grace Blakeley-Carroll. So Grace, can you tell me about Ellis Rowan?

B:        Ellis Rowan was born in 1848 in Victoria and she was one of Australia’s most gifted artists. She was a very successful artist and she died in 1922 leaving a very large collection of works.

B:        Ellis herself lobbied for the government to purchase her works on behalf of the nation and they did eventually but sadly she didn’t live to see it. The collection was purchased a year after her death for quite a sum, of £5,000 and over 900 works of art were purchased, watercolours, mostly botanical studies which was her specialty.

G:        So that’s a huge amount of money so they must have thought it was a really important collection.

B:        Absolutely, a very large sum of money for a very significant collection and it also must be noted very significant that it was a female artist’s work that was purchased which as we know women artists didn’t always have the same level of recognition that they do today.

G:        So, Grace, Ellis Rowan’s really well known for her botanical drawings but I can see here we’re looking at birds.

B:        Yeah, you're right, Guy. In fact most of her artistic output involved paintings of wildflowers mostly painted in Australia but she did travel overseas as well and that included a trip to New Guinea. While in New Guinea she also painted the region’s birds of paradise and most of the work that we have here in the exhibition actually form part of that original acquisition back in the 1920s of the large collection of Rowan works that we are looking after here at the National Library of Australia.

G:        So how did she come to be in New Guinea? It must have been a very adventurous thing for a woman to travel to New Guinea and I think this is during world war one, isn’t it?

B:        Absolutely so she went during the First World War and she had hoped to go for quite a long time, she was really drawn to the region’s wildflowers. She’d heard about them and desperately wanted to go there. Fortunately she was able to secure a commission to go there, paint the wildflowers and also to paint birds of paradise. Part of that commission involved designing cake plates that would feature the birds of paradise.

G:        How did you manage to identify all the birds because I can see you’ve got the correct names in the labels? So it must have been quite a big job to do that.

B:        Well fortunately working at the National Library I had access to a large number of books so I was able to look at different resources to find out more information about the birds of paradise. Then you’ll see in some instances I’ve put words such as most likely when I’m identifying a bird and that’s when I’m not 100% sure. It could be that Ellis had painted a rare hybrid species or maybe the colours are just a little bit off, perhaps because she finished the works back in Australia, all sorts of things, maybe she was perfecting on the natural world by adding a little extra colour. So it was quite interesting to try and identify the different birds and hopefully perhaps people out there might have further information about these birds and we can add them to our records.

G:        I’m really curious as to how she actually managed to paint the birds too like was it close examination, close study, were they alive? How did she manage to do it?

B:        Absolutely so she was assisted by indigenous Papuan people who assisted her with her trip to New Guinea. There was a bit of a miscommunication, I understand, and sadly the first few birds came to her dead, they were killed and she was very distressed by that. She didn’t want the birds to die and from then on she painted all of the birds from life and I believe she held the bird in one hand and then she would paint it with the other hand. Of course the bird being alive and probably not very happy to be held in that way would peck at her and she’d be bleeding and have scratches and she’d persevere with her painting. Then there’s some evidence that she did continue to study the birds from specimens back in Australia.

B:        Birds of paradise are a type of bird that lives primarily in New Guinea. There are two species in Australia but most of them are in New Guinea and they’re really known for their bold, one could say, exotic feathers and these feathers are used in mating rituals designed to lure the female birds of paradise.

G:        So you can see this bird’s got a spectacular array so when it’s actually doing its dance that’s what you would see come flying up.

B:        Exactly and there are as I said many different types of birds of paradise and some aren’t quite as colourful as this one. Because the areas in which they live in New Guinea, they’re quite lush, there’s plenty of food, it means that the male birds of paradise could really focus on mating, on attracting a female. So a lot of their attention then has gone into developing these really elaborate mating rituals that they use their feathers, some of them have wires and the different birds have different characteristics and they’re used in different ways for these very elaborate rituals that they perform. It’s hard to explain without watching them on a video.

B:        I’m glad you asked, Guy. Well I understand that there are actually more female birds of paradise than male birds of paradise and I understand that the females are quite picky so in fact because in this bird world it’s the males who are trying to attract the females with their dance for mating, because the women have options they don’t need to be as colourful and they don’t need to do the same types of dances that the males do so that’s why the females look different to the males.

G:        Grace so birds of paradise are a national symbol of New Guinea, aren’t they?

G:        They’re clearly very proud of their birds of paradise. So, Grace, looking at this show I can see that Ellis Rowan was really one of the most important Australian artists of the period.

B:        Absolutely. She’s a remarkable artist for many reasons, for the achievements, the awards that she received during her lifetime, the size and quality of her work, the places that she travelled, the flowers that she painted and documented. You can really see her talent. Particularly in this period in New Guinea I think she was at the height of her confidence as an artist, you could see it in the wonderful compositions that she put together including flowers, of course, and insects with the birds. So she’s definitely referencing her passions in the bird paintings, the bold colours that she’s using and I think they’re part of the reason why this collection was considered so significant and was purchased for the nation.

G:        So she’s really a trailblazing woman at this time, going out there and doing quite remarkable work.

B:        Oh absolutely, Guy. You’ve got to remember at this time many women artists weren’t taken terribly seriously, being an artist was considered a skill a woman might have among other skills, preparing her for marriage, that sort of thing. It was hard to get recognition as a female artist at the time, tended to be very dominated by men, the industry and also the fact that her work involved travelling often by herself to far-flung places and going right into the bush and definitely attitudes about what a woman should and shouldn’t do were quite strong at that time. She very much carried on and did her own thing and was very successful at it.

G:        Thanks very much for that wonderful tour of this exhibition, Grace, I really learnt a lot about the birds of paradise.

If you’d like to know more about this exhibition you can visit us at www.nla.gov.au. Hope you enjoyed the tour.