Most of the books and periodicals that children in Australia read in the nineteenth century were imported from Great Britain. Australian publishers were often reluctant to support local authors because it was easier and less expensive for them to reprint books from England or the United States. A Mother’s Offering to Her Children: By a Lady Long Resident in New South Wales (1841) by Charlotte Waring Atkinson (Charlotte Barton) was the first locally published Australian book for children. However, it was not until the 1880s that more authors, particularly women writers, were given the opportunity to have their work published. They often began their careers by submitting their manuscripts to the children’s columns of local newspapers or to children’s periodicals. Two women who became successful authors were Ethel Turner (1870-1958) and Mary Grant Bruce (1878-1958). Turner’s iconic novel Seven Little Australians (1894) has been translated into more than 10 languages. Swedish, Chinese, and Japanese editions of the book are on display in the exhibition. 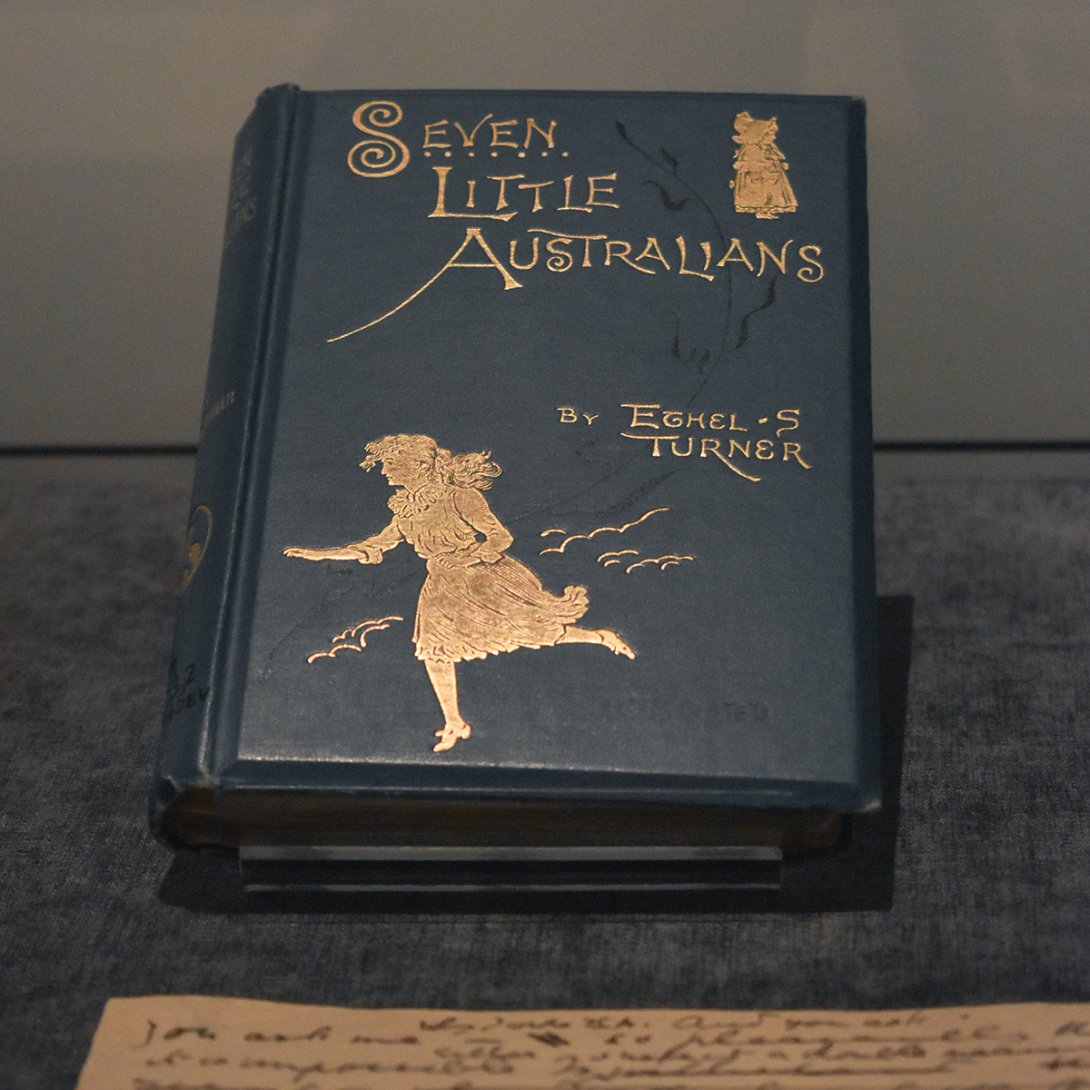 Seven Little Australians begins by highlighting the differences between Australian and British children. Turner describes Australian children as joyful, rebellious, and mischievous. She claims that the unique Australian landscape and climate influenced Australian children’s disposition. Mary Grant Bruce, known for her ‘Billabong’ books, also celebrates Australian children’s close connection with the bush. A Little Bush Maid (1910), the first of the 15 novels in the Billabong series, tells the story of Norah Linton and her family in Northern Victoria.

Australia’s flora and fauna continued to inspire authors in the twentieth century. The Magic Pudding (1918), Snugglepot and Cuddlepie (1918), and Blinky Bill (1933), published before WWII, introduced readers to memorable Australian characters that have delighted children for almost a century. Animals also feature in the works of contemporary authors such as Graeme Base, Mem Fox, Leigh Hobbs, and Jackie French. 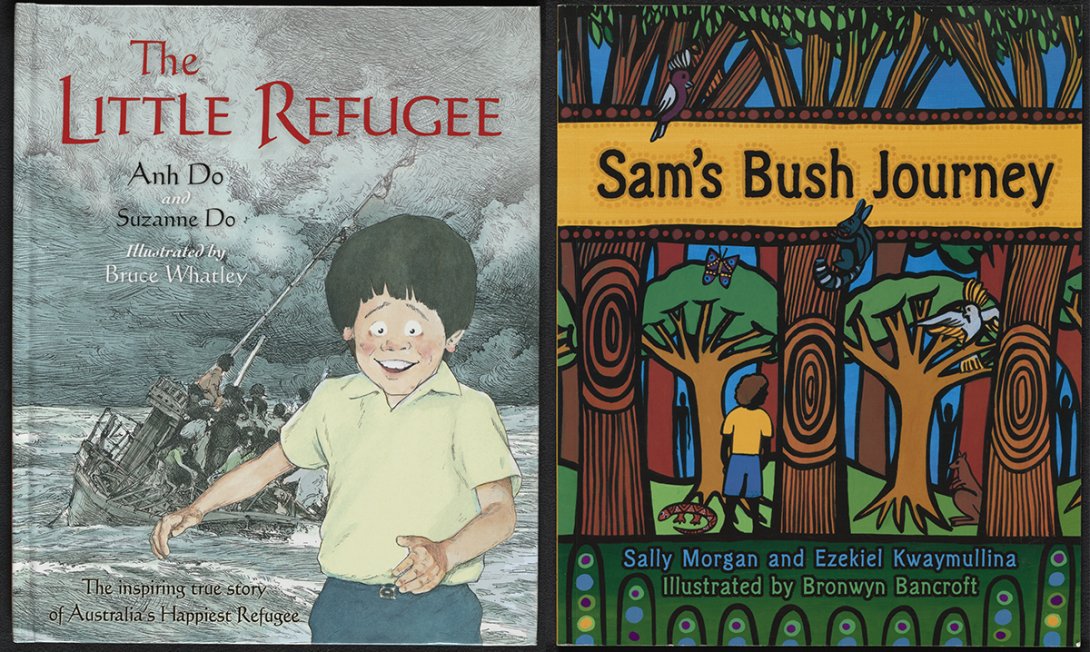 Cover of The Little Refugee by Ahn Do and Suzanne Do, illustrated by Bruce Whately (Crows Nest, NSW: Allen and Unwin, 2011) and Sam's Bush Journey by Sally Morgan and Ezekiel Kwaymullina, illustrated by Bronwyn Bancroft (Surry Hills, NSW: Little Hare, 2010)

In the 1970s, multiculturalism became a federal policy and the number of multicultural books published in Australia increased gradually. On 16 February 2011, The People of Australia – Australia's Multicultural Policy was launched, reaffirming the importance of cultural diversity. The exhibition features numerous multicultural books, including My Place (1987), The Arrival (2006), Sam’s Bush Journey (2010), The Little Refugee (2011), and My Two Blankets (2014).

There are many wonderful books in the exhibition, and one of my favourites is Shaun Tan’s The Arrival, an evocative wordless picture book about migration. As he explains in his author’s note, Tan based some of his illustrations on photos of immigrants who arrived on Ellis Island, New York. He was also motivated by his father’s story of moving from Malaysia to Australia in 1960. The book highlights the loneliness and isolation that many immigrants feel when they first arrive in a new country. It also uses surreal illustrations to convey how barriers in language and different cultural practices can make one feel like an alien in a strange land. But the book also provides a sense of hope.

The protagonist eventually finds a place to live, lands a job, and makes new friends. These new friends tell him their stories. Eventually he is reunited with his wife and little girl. The book ends on an uplifting note, as readers see the main character’s daughter helping a new immigrant find her way around the city. 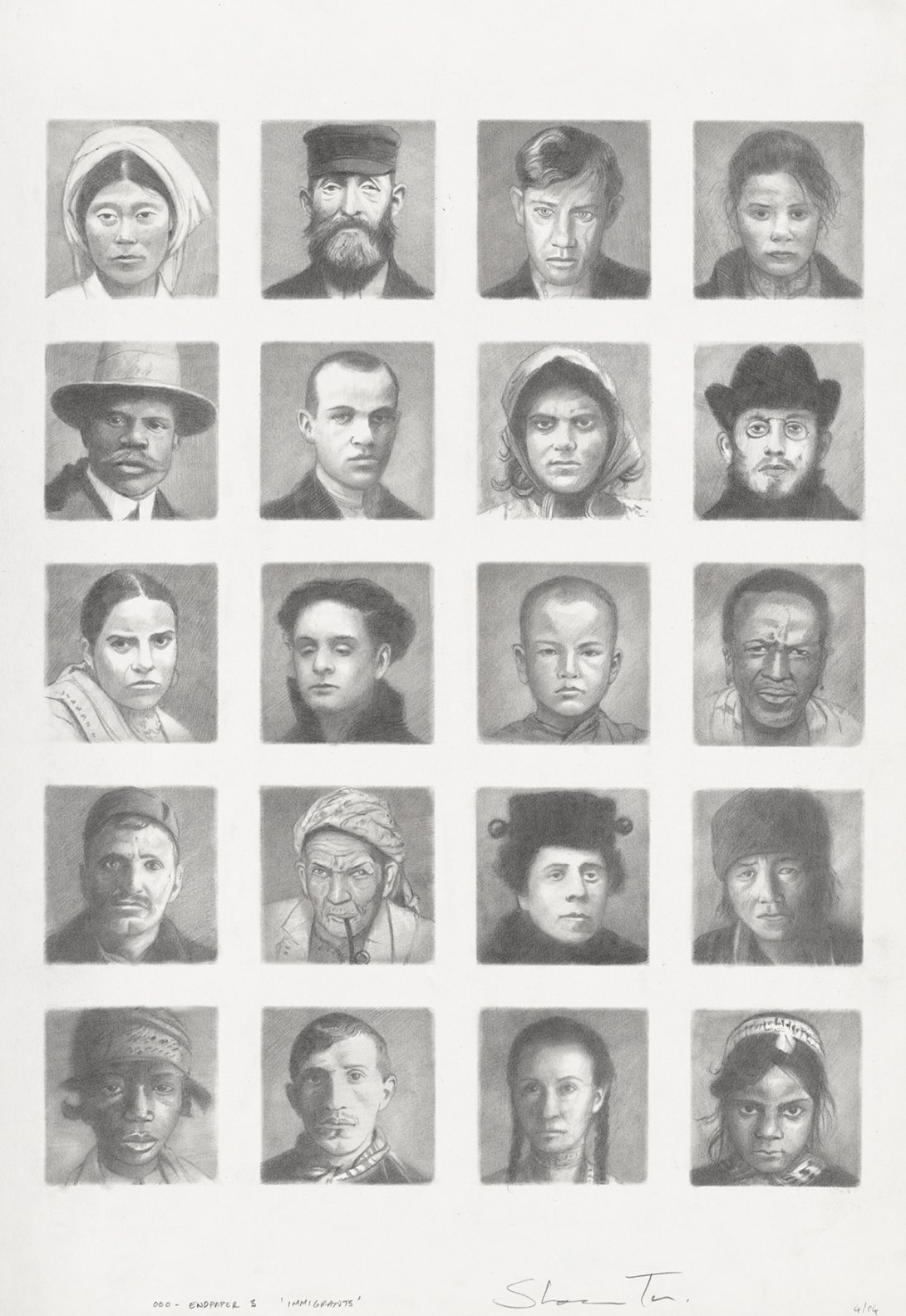 Dr Shih-Wen Sue Chen is Senior Lecturer in Writing and Literature at Deakin University. In 2017, she was a National Library of Australia Fellow. She is the author of Children’s Literature and Transnational Knowledge in Modern China (2019) and Representations of China in British Children’s Fiction, 1851-1911 (2013).