When I've seen manuscripts of famous books, I’ve thought about the process between that handwritten draft and the paperback I own. I've wondered about how the text was changed by an editor, and the typesetters who carefully set the type. Who was involved in publishing that manuscript? And how much did it cost? 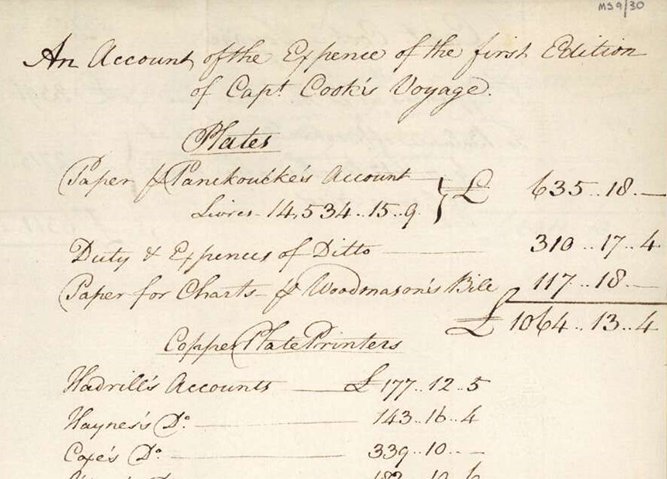 Over the past year, a showcase in our Treasures Gallery has explored how one book was published in London in 1784. This blog is inspired by that display.

The book was the official account of James Cook’s third and last Pacific voyage for the Royal Navy, a voyage charged with searching for the fabled north-west passage: James Cook and James King, A Voyage to the Pacific Ocean: undertaken, by the command of His Majesty, for making discoveries in the northern hemisphere (London: Printed by W. and A. Strahan for G. Nicol and T. Cadell, 1784). In the end, it was published in three main volumes, and a larger volume of maps and illustrations called an atlas volume. It was a complex production. The book’s scope and subject matter were ambitious. There were many illustrations. And the main author—Cook—died partway through the voyage and left an incomplete manuscript.

In many ways, publishing an official account of the voyage was all-important. It was the voyage's most accessible contribution to knowledge. An official version of the voyage endorsed by the Admiralty would be read widely. The more comprehensive it was, the more influence it would have.

The National Library of Australia holds manuscripts and illustrations that lay out, in rich detail, how the book was published. We are privy to all kinds of things: how the paper was ordered, how the illustrations and maps were done, and even who received free copies. Today, we would say that Joseph Banks (1743–1820) ‘project managed’ the book. 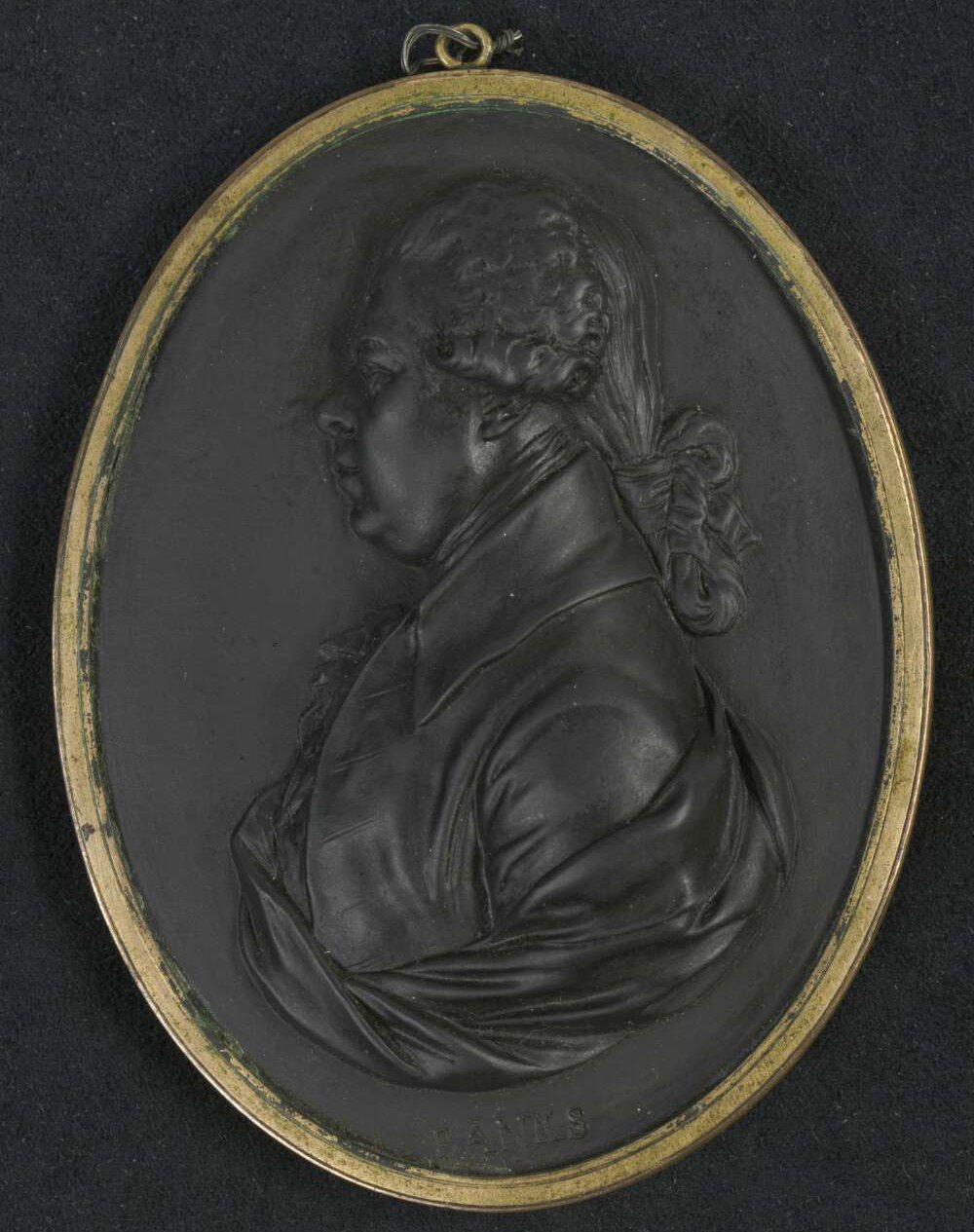 Banks was in his late thirties at this time. He was no longer the precocious 25-year-old naturalist who sailed on the Endeavour voyage in 1768. He was now well-established. In 1777, he moved to 32 Soho Square where he lived until he died, in 1778 he was elected President of the Royal Society and in 1779 he married heiress Dorothea Hugessen.

The National Library of Australia has three major collections that show how the book was created: papers relating to Sir Joseph Banks, consisting of lists and letters, memos and drafts showing the intricacies of the negotiations he managed; papers of the former First Lord of the Admiralty, the Earl of Sandwich, which give some insight into the dispute resolution the project required; and numerous original works of art by voyage artists John Webber and William Ellis, some of which were engraved for the published book. Other relevant manuscripts are held by the British Library and The National Archives (UK), in London. These include the original journal drafts in Cook's handwriting, the edited manuscript version and correspondence about the revision of the text.

Of the National Library of Australia's collections, Banks' papers give the most substantial insight into the process. There were discussions about which paper to use for the text, the illustrations and the maps. In the end, it was decided that French paper, supplied by Paris bookseller and entrepreneur Charles-Joseph Panckoucke, was best for 'the plates', the illustrations. 51 digitised images cover just this topic. English paper, however, was used for the maps.

Preparing the text was challenging. Cook was killed on 14 February 1779, 20 months before the expedition returned to England in October 1780. Charles Clerke, who took over command of the voyage had continued a journal, but then died in Kamchatka in August 1779. Captain James King played a key role on their return to England, as the most capable, surviving officer from the voyage. John Douglas, Canon of Windsor revised and edited the manuscript, as he had done for the official account of Cook's second Pacific voyage (1772–1775).

Voyage artist John Webber returned to England with many portraits and landscapes. This list of his work is an invaluable record of his artistic output on the third Pacific voyage. For more detailed information, see this article by Rüdiger Joppien. 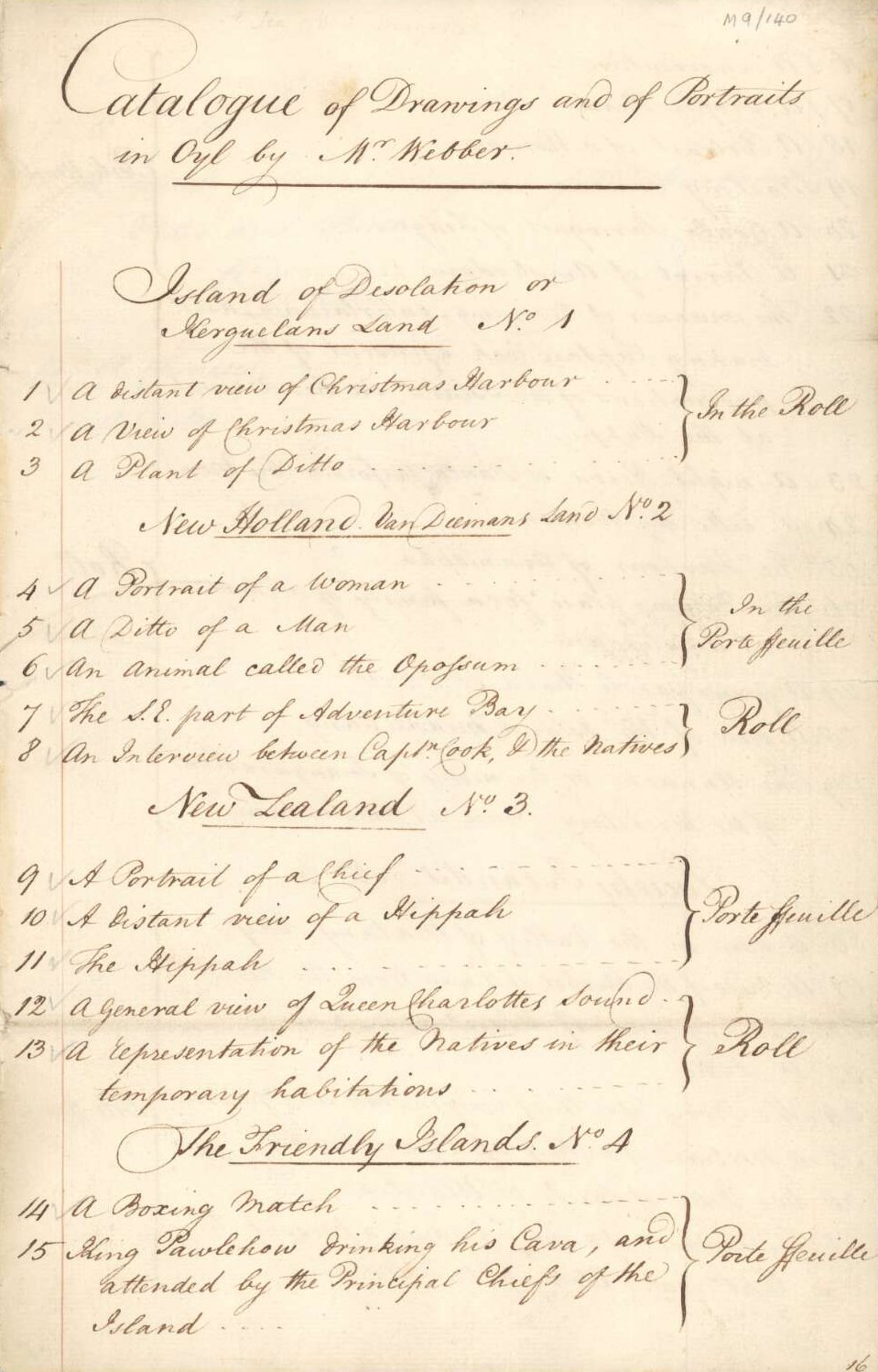 A selection was made for engraving for the official account. This work was farmed out to numerous leading London engravers, such as William Byrne and John Keyes Sherwin. In Banks' papers is a list of their addresses. Other lists show how much each engraving cost, and when the engravers borrowed and returned Webber's originals. Sums paid seem dependent on whether it was a landscape, a portrait or of an animal, and the complexity of the engraving. For example, we see that the possum engraving by Peter Mazell (above) yielded 10 pounds 10 shillings, whereas John Sherwin was paid 126 pounds for the more complex A Dance in Otaheite. The Library also holds a volume of proofs of third voyage engravings. 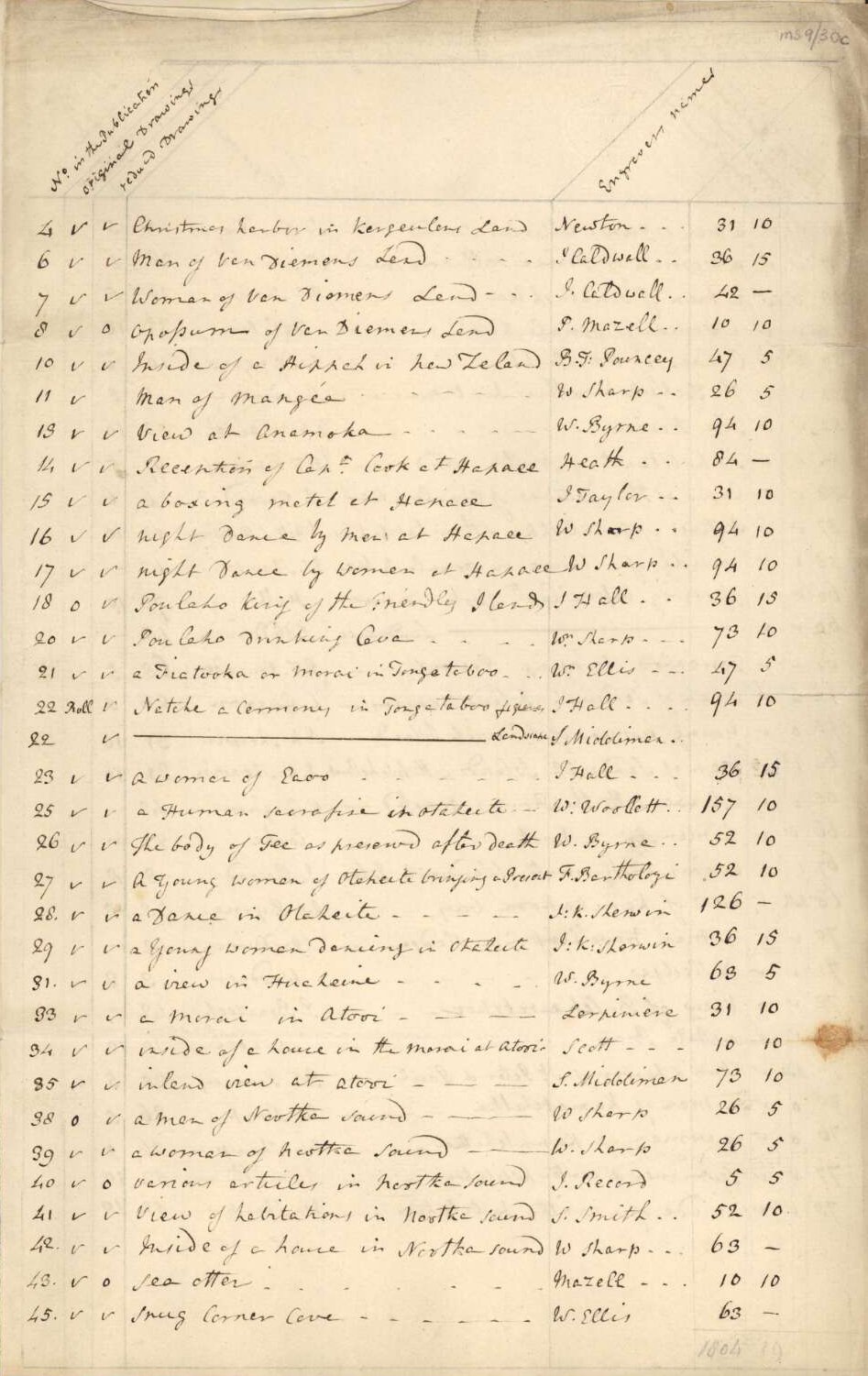 Summaries of expenses show how much the account cost to produce. Over half the money went on the illustrations. 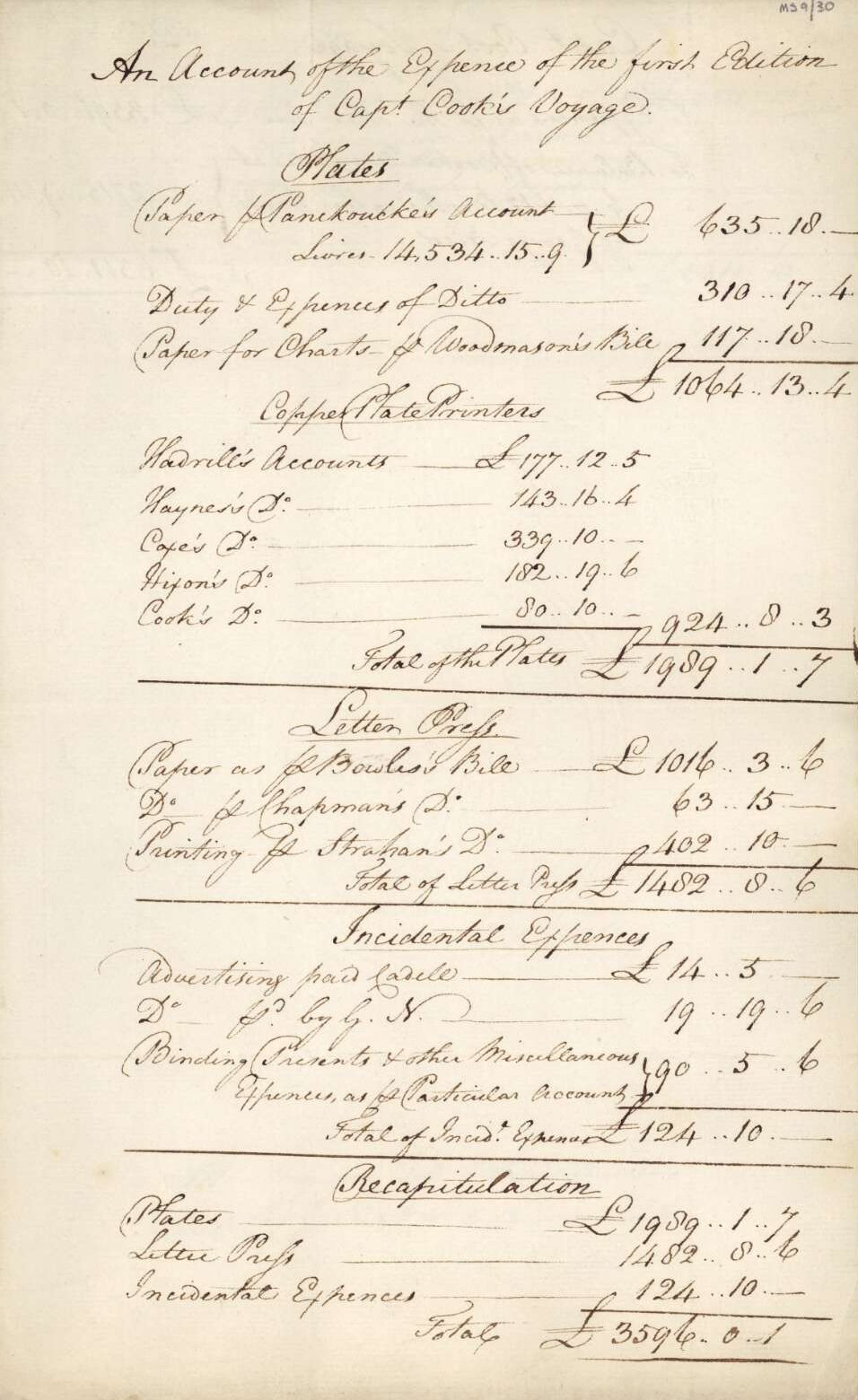 One of my favourite manuscripts is a list in Banks' handwriting. It shows who was to receive 'presents' of bound copies of the account: libraries, officials, people who had sailed on the voyage or contributed to the project. Royal recipients included King George III and Queen Charlotte; their son the Prince of Wales; Catherine the Great of Russia; and Louis XVI of France, who was guillotined during the French Revolution. American founding father and polymath Benjamin Franklin also received a copy. Cook’s widow was given two copies. Banks was restrained and only allowed himself one.

Banks drafted parts of the letters to Louis XVI, Catherine the Great and Benjamin Franklin that were sent out with the books from the Admiralty. 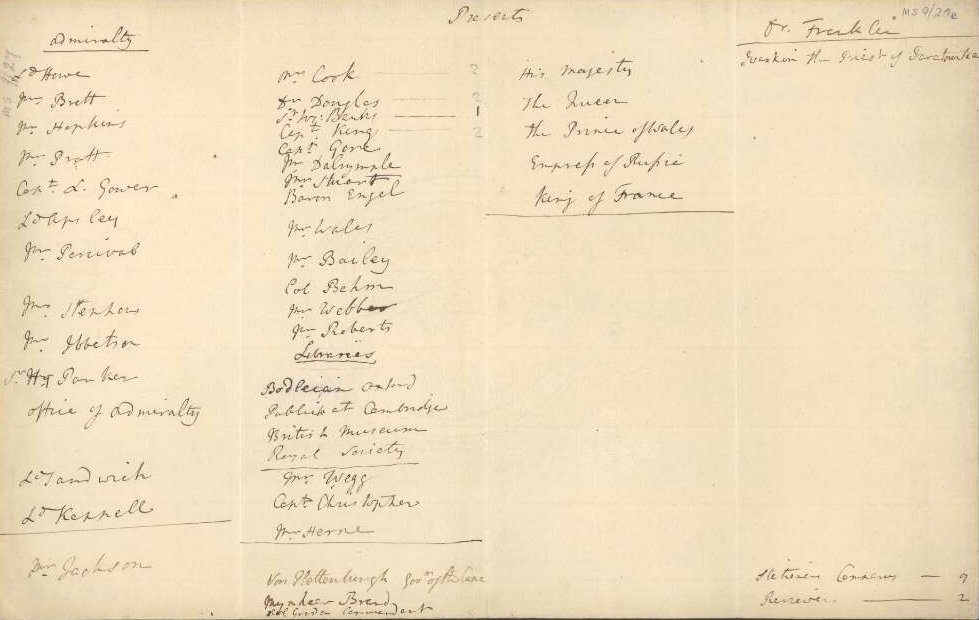 In these collections, we can see the complexity, the lobbying and the expense of book publishing, and how human nature has little changed since 1784. Most obvious, however, is the concerted effort many people made to avoid letting the project 'sleep'. Exploring these collections was a fascinating journey for me, especially seeing the issues from multiple sides, the jealousies, the egos, the disputes and their resolution. They offer invaluable depth: the back story, which is often lost to history.

So take the plunge into the detail of our digital collections. You never know what you might find.