A guide to collections of digitized documentary materials relating to the history, culture and people of the Pacific region.

This guide therefore aims to provide researchers with easy access to a variety of online primary resources existing within and beyond the National Library of Australia's collections. Such resources help to build a picture of the significant events and catalysts for change which have occurred in the Pacific region in recent centuries, as well as the Pacific’s myriad of traditional and enduring cultures.

Trove is a national discovery service built and managed by the National Library of Australia. Trove is the Library’s primary vehicle to assist users to access digital- and physical-format content held in over 1000 libraries, archives, museums and galleries across Australia. Trove allows searching and access to digitised pictorial collections in many of these Australian cultural institutions. It includes images related to Australia's Pacific mining interests, wartime involvement, governance, strategic and diplomatic alliances during the 20th century as well as images depicting Pacific life and scenery.

The South Seas Project documents the history of European voyaging and cross-cultural encounters in the Pacific between 1760 and 1800. It features full texts of James Cook's Endeavour Journal, as well as journals kept by Joseph Banks and Sydney Parkinson. It also features digitised engravings and related images. Hosted by the National Library of Australia.

The Pacific Manuscripts Bureau (PMB) is based in the Research School of Pacific and Asian Studies at ANU. It aims to copy and preserve documentary heritage materials from the Pacific Islands, such as archives, manuscripts and rare printed materials. PMB has digitised over 40 photographic collections. Photos, posters and slides have been scanned to digital format. The Bureau is currently working towards making these collections available to Member Libraries via an online database.

The National Archives of Australia manages documents relating to the activities of prominent Australians, the judiciary and the Australian Government since federation. Its collection includes paper files, photographs, audiovisual and sound recordings, maps and other objects. Digitised materials such as those relating to Australia's wartime involvement in the Pacific and its governance of Papua New Guinea can be accessed online through its 'PhotoSearch' or 'RecordSearch' services.

The Pacific And Regional Archive for Digital Sources in Endangered Cultures is a facility for digital conservation for endangered materials from the Pacific region. Collection metadata is available via guest login and many collections are freely accessible. Of particular interest are the Arthur Capell (1902-1986) and Stephen Adolphe Wurm (1922-2001) fieldnotes collections. Capell was a linguist and ethnographer who recorded and documented Australian Aboriginal and endangered languages in the Asia-Pacific region. Wurm was Emeritus Professor of Linguistics at ANU and his collection features records relating to his Solomon Islands research.

The University of Auckland has a very strong Pacific focus and is responsible for developing and managing a number of digital collections. The Library's New Zealand and Pacific digital collections include a digitised social anthropology and archaeology photographic archive, and digitised maps.

The National Library of New Zealand's digitized collections are a gateway to numerous electronic resources and digitised collections relating to the people, history, culture and places of New Zealand. It includes the digitised Maori magazine Te Ao Hou which was published from 1952 to 1975, and the online Rangiatea exhibition which documents the history of the oldest Anglican Maori Church until it was destroyed in 1995.

Papers Past is New Zealand's newspapers and periodical digitisation project. The collection covers more than a million pages from regional and national NZ publications from 1840 to 1915, and has full-text searching. Hosted by the National Library of New Zealand.

The New Zealand Electronic Text Centre is an online archive of significant New Zealand and Pacific Islands materials. It contains born-digital content as well as searchable heritage manuscripts, journals and other texts. It also includes many accompanying images such as postcards, newspaper clippings and cartoons, line-drawings and photos. The NZETC is part of the Victoria University of Wellington Library.

The University of Canterbury Library holds a large number of Pacific images that are currently in the process of being digitised. Collections online so far include the AC Graham Photographs, the Canterbury Mountaineering Club Records and Photographs and the John Macmillan Brown Collection, which feature photographs and glass plates of people, clubs and landscapes from both the 19th and 20th centuries. The Canterbury Frozen Meat Company photographs feature company images from a similarly broad period. Navigate to these collections by clicking on the search option under 'Photographs'.

University of Hawaii at Manoa

The University of Hawaii at Manoa Library's digital and digitised collections have a strong Hawaiian focus, but also feature some wider Pacific content. The Trust Territory Photos Archive contains digitised images of Micronesia from 1947-1988 when the islands were administered by the U.S. and known as the U.N.’s ‘Trust Territory of the Pacific Islands.’

The Archives of New Caledonia includes a small selection of digitised photographs documenting life, scenery and developments in the colony from the mid-19th century until the 20th.

PapuaWeb is an information network for students, researchers, development workers, community leaders, government agencies and others working on issues relevant to Papua, Indonesia (formerly Irian Jaya). It contains a document archive, which includes theses and other research materials covering various topics in the humanities and sciences fields. There is also an image archive, which features an illustrated html version of Alfred Wallace’s 1869 publication, The Malay Archipelago: the land of the orang-utan, and the bird of paradise: a narrative of travel with studies of man and nature, as well as illustrations from 19th century books and recent and historical maps of Papua. Jointly hosted by the University of Papua, Cenderawasih University and the Australian National University.

Memory of the Netherlands

Gallica is the digital library of the Bibliothèque Nationale de France. It contains digitised printed and graphic materials as well as sound recordings. It is a huge repository of resources many of which relate to Pacific exploration and the colonisation of New Caledonia, Tahiti and Vanuatu.

Images Online provides access to thousands of the images from the collections of the British Library. It includes manuscripts, rare books, musical texts, maps, illustrations, drawings, paintings and photographs. The collection includes material relating to Exploration and Maps and Landscapes and can be browsed under these terms. It features a vast array of resources documenting the increasing English presence in the Pacific from the 16th century onwards.

The U.S. National Archive's Digital Vaults contains some digitised photographs and documents relating to Hawaii and WWII Pacific involvement. It includes the 1897 Petition Against Annexation signed by more than 21,000 native Hawaiians and addressed to the U.S. President.

The University of Washington's digital collections include the Lauren Donaldson collection. It features digitised personal logs, photo albums, ephemera and papers relating to radiological surveys undertaken after atmospheric nuclear weapons testing conducted by the United States in the South Pacific between 1946 and 1964. 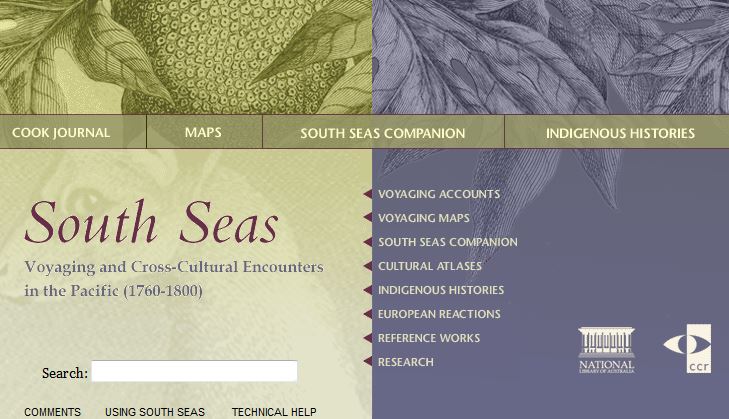