Thanks to the generosity of donors during the 2018 appeal, digitisation work has transformed the extraordinary collection of PROMPT theatre scrapbooks in the National Library’s collection. Photographer Hilary Wardhaugh from the Library’s Digitisation & Document Delivery branch takes us through the complexities of capturing brittle theatre scrapbooks. She writes:

The PROMPT theatre scrapbooks project focused on 18 scrapbooks, dating from the very late 19th century to the mid-twentieth century. The subject matter includes theatre, opera, ballet and other musical events.

Photographically, the PROMPT scrapbook project has been quite challenging for several reasons:

•    the age and condition of the material;

•    the fragility of most of the scrapbooks, papers and binding; 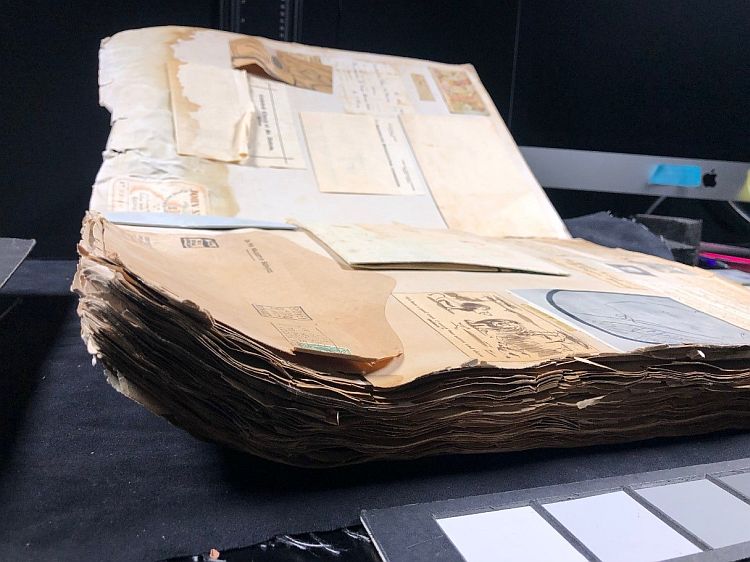 Scrapbook #18 was warped and water-damaged 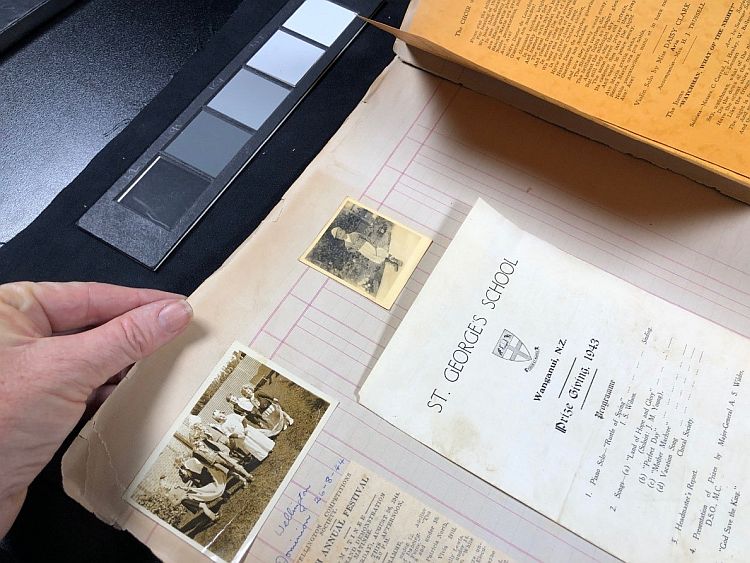 Each book has its own challenges. At the time of writing, PROMPT Scrapbook 19 has taken the longest to digitise, and as one of the first that we undertook, it was an important one to set the standard for the digitisation of the project. It required much collaboration with the other members of the team, to ensure the best outcome for the end user.

When digitising individual pages, it was necessary to lay the page flat and parallel to the plane of the camera sensor, so we established a number of digitisation standards at the beginning of the project. This meant pages were to be captured at the very highest resolution possible, allowing smaller details to be seen by the end user, even when zooming in.

Other digitisation standards include:
•    using a Hasselblad H5D camera with a 120 mm lens. I use an aperture of f11 to make certain that the depth of focus was optimal even for books that were grossly warped and curvy;

•    the Sinar Camera System was also been used for the books where text and other information was so far in the gutter of the books, that the Hasselblad was unable to capture because of technical limitations;

•    where pages included a colour article (flyers, invites, menus, letters and envelopes) a 6x shot is used as it allows not only the best resolution but also the best rendering of the colour object;

•     where pages have small articles  less than A5 a 4x shot capture is used;

•    where a page has a multi-page pamphlet adhered to it, I capture it as is in situ. I then open it to the first page as a double page spread to give it context and then the rest of the pages individually after that;

•    when an article on a page is a large folded article it is digitised as is in situ and then completely open, but also visualising the book to give it context; and

•    I use weights, sponges and other objects to bolster the book at various points underneath the book to get the page/object as flat as possible; and, where the binding had completely deteriorated I photographed pages singularly. This made it easy to get the page flat. 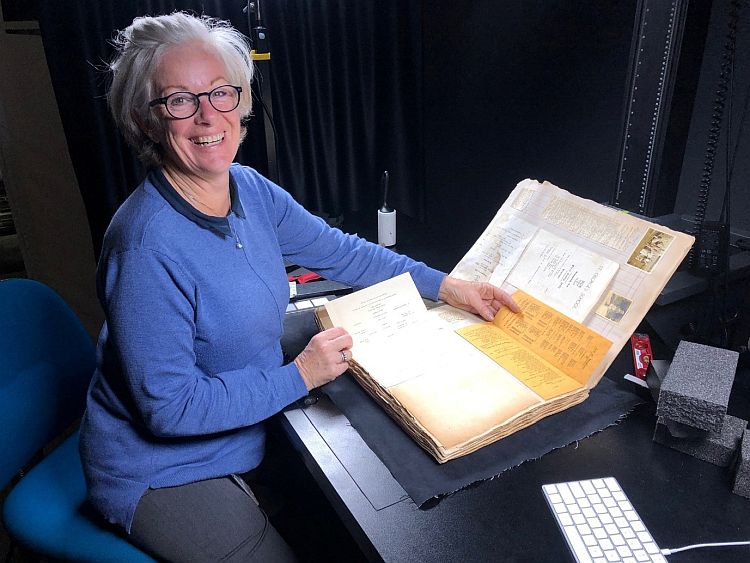 Photographer Hilary Wardhaugh with a scrapbook open with multiple inserts

It has been an interesting and challenging project for the Digitisation team, and there was much to learn. Some of it was, at times, quite laborious, but other times, surprisingly easy. My favourite part so far has been when I had the opportunity to read a few of the new clippings. They are certainly reflective of an era in Australian history when European settlement was prominent.
Hilary Wardhaugh