As a volunteer with the National Library of Australia, you never know what tasks you might get involved in: sorting century-old photographs, wrestling monster staples or cackling at an entertainer’s lines. Excitingly though, where might you find yourself? In the Library’s Maps branch, perhaps. This is where I found myself in September 2019, working on the Maps Formed Collections project under the supervision of Susie Russell. This project aims to catalogue, digitize and enhance discoverability of donated maps. I began with the Evan Richard Stanley map collection, describing it for the purposes of creating a catalogue record and finding aid. Counting in at nineteen maps, it wasn’t a huge collection but an enthralling one. It is a gateway into an unknown and mysterious world - to me, with little knowledge of geology and Papua New Guinea. 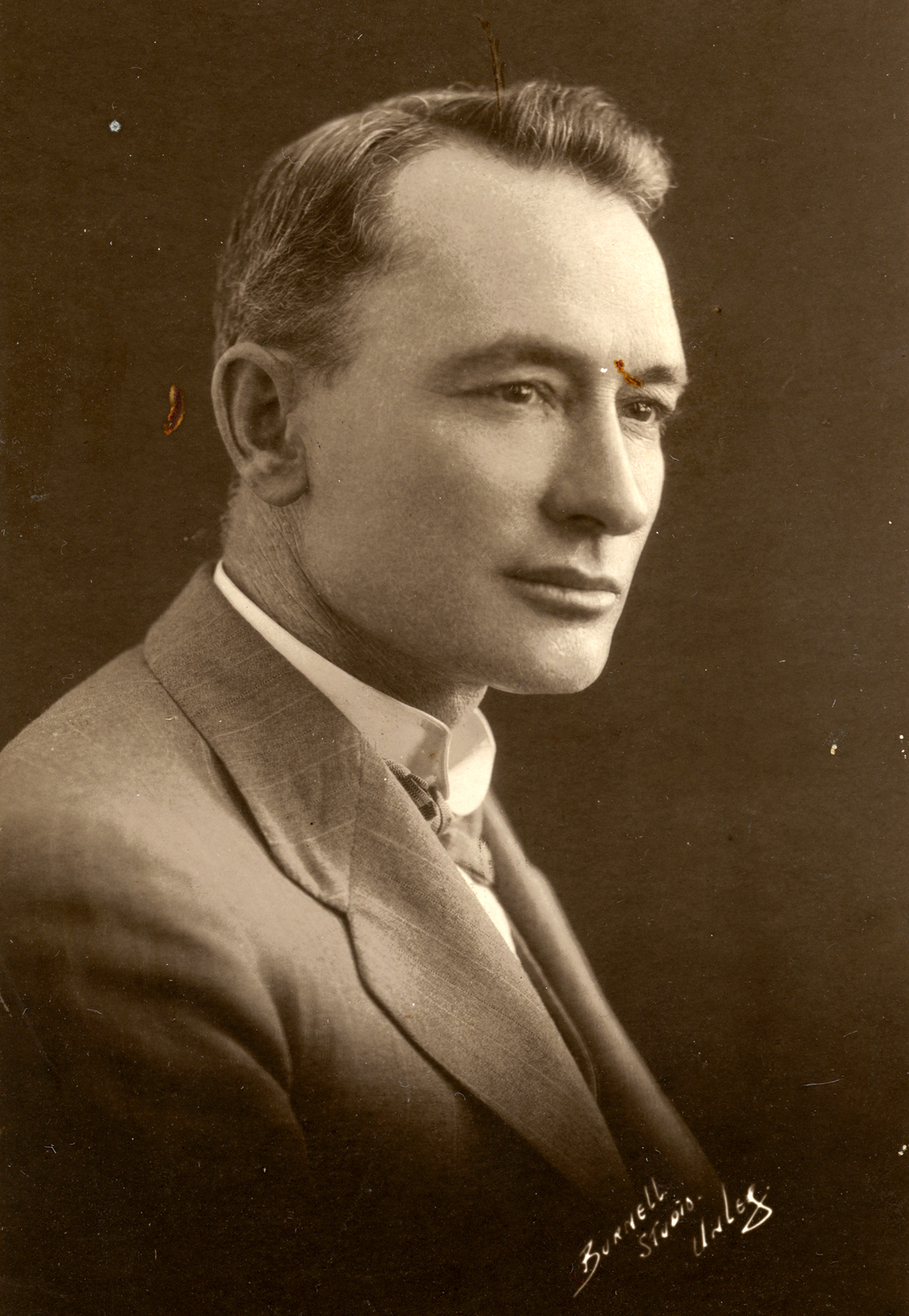 Evan Richard Stanley (1885-1924) was Australia’s first Government Geologist for the Australian Territory of Papua. Between 1911-1924, he surveyed and mapped enormous swathes of the country, often working alone in arduous conditions. Despite these obstacles, he contributed new and important knowledge about the geology and geography of Papua and the wider region, as well as valuable information about its resources.

Stanley’s maps cover many regions including the capital Port Moresby and surrounds and New Guinea as mandated by the League of Nations. Some parts of Australia’s Northern Territory can also be found. Many are topographic sketch maps, some laid out with grid lines, and all meticulously detailed. There are warm colours of ochre, olive-green and delicate salmon pink. Areas dark with contour lines indicate steep terrain; ‘blank’ areas depict low swampy ground and boggy flats. Oil, gas and proposed dams are marked. As too are are deserted villages. 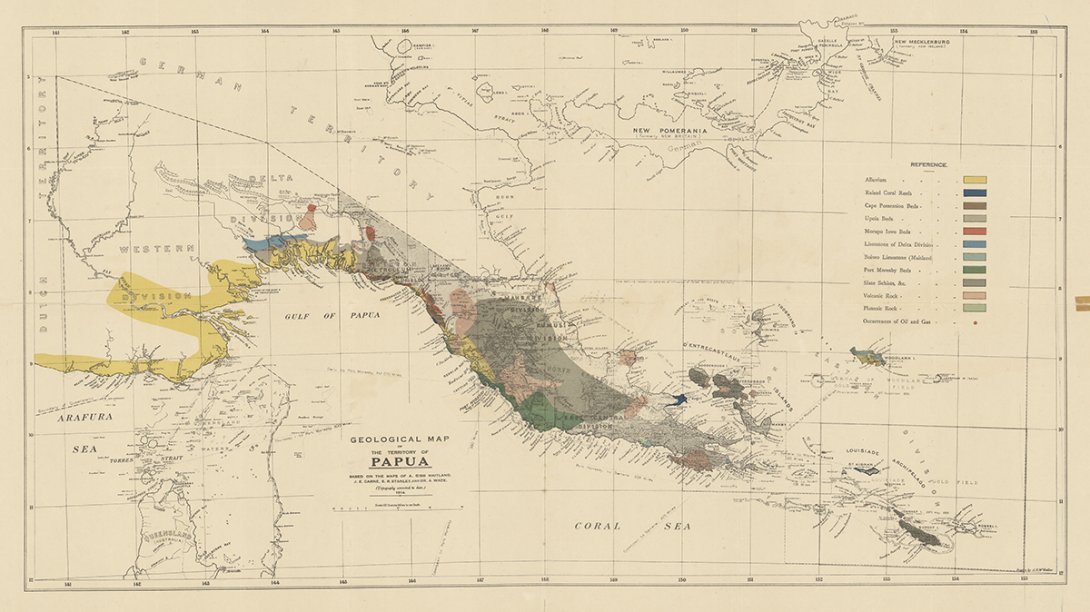 While poring over these landscapes, I came across some unexpected words: bananas, sago, coconuts. There were villages, tracks, missions and camps. These symbols suggested a certain diet and way of life. This was a meeting of cultures, something I could relate to, having grown up in tropical, post-colonial Singapore. 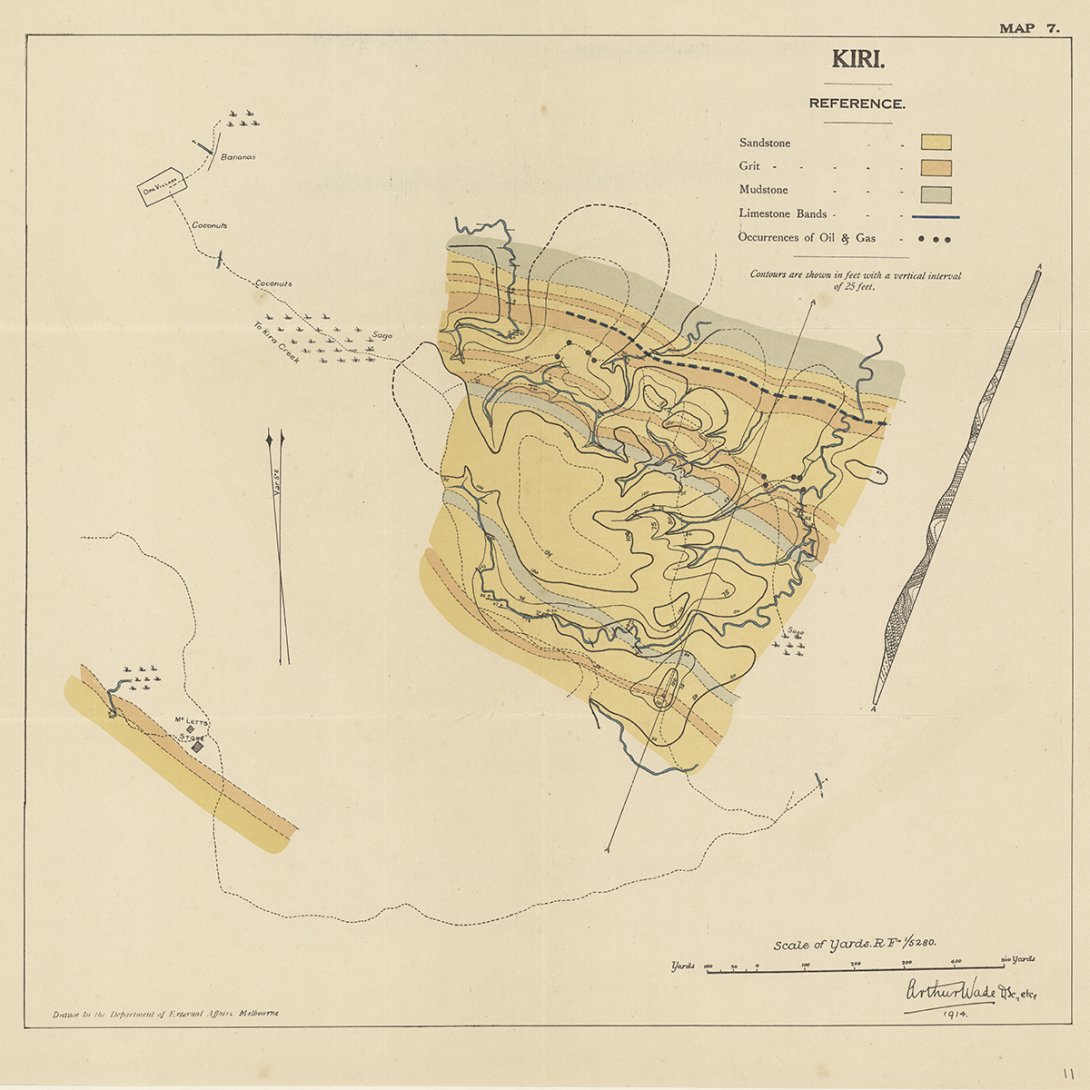 Stanley wrote many reports of his work in Papua. These are now held in the Library’s Manuscript collections MS 9713 and 7933. They can be accessed through the Special Collections Reading Room. Other publications are accessible through the Main Reading Room. Reading these publications brought his maps vividly to life. One example is Stanley's visit to the Vailala Petroleum area in Papua's Gulf division in 1912. Here he investigated oil occurences around the villages of Akauda, Opa and Aro-Aro. 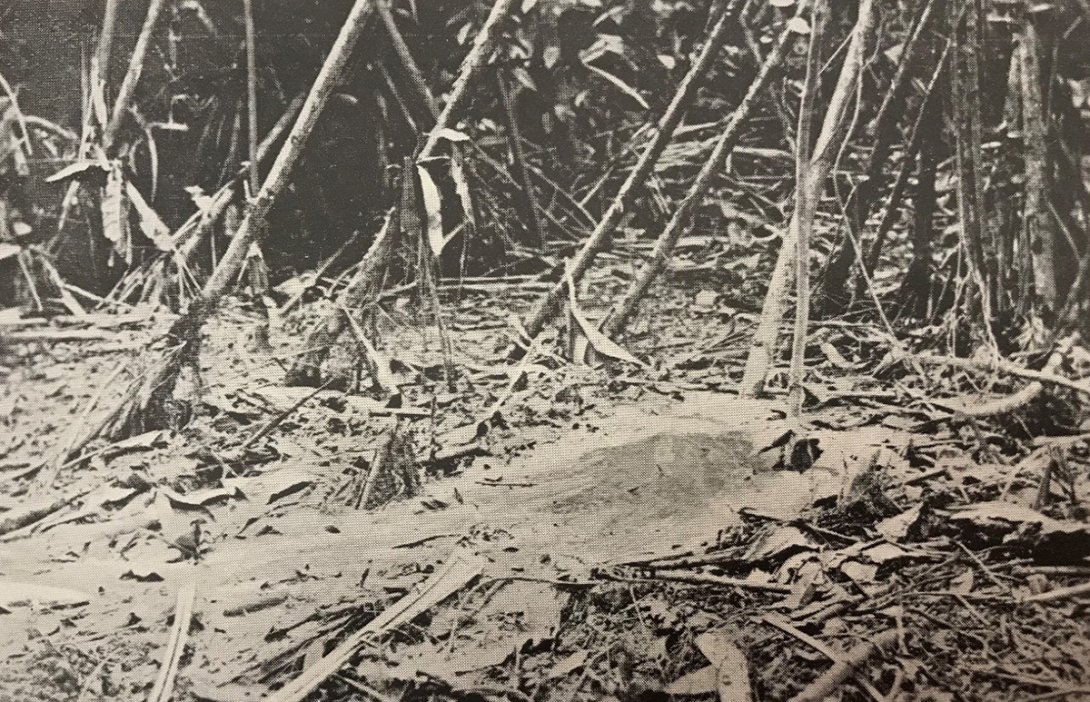 His matter-of-fact account almost hides the excitement of discovery. He describes mud volcanoes spouting from the forest floor, pools of bubbling oily froth, petroleum seeping out of rocks . I couldn’t help wondering at the sight and sound of these, especially from Stanley’s descriptions of ‘brown-coloured petroliferous scum’ and ‘fluorescent globules’ floating on the creek surface. At one gas vent, the fizzing output ignited, producing a luminous blue flame which boiled a billy-can of water. The resulting pleasant ‘ethereal odour’ hung in the air.

Apart from geological investigations, Stanley took a lively interest in indigenous peoples whom he met. In 1921 he travelled up the Ramu River on the Commonwealth Scientific Expedition to the mandated New Guinea Territory. His geological investigations there included the first descriptions of New Britain’s volcanoes. His detailed observations noted the way of life, cultural practices, farming and dwellings of the indigenous people of the region. Stanley was struck by the diversity of the groups he encountered on the Ramu River and the north coasts of New Guinea and New Britain. He compiled lists of indigenous words with English translations to improve communication. This resulted in several vocabularies because of the many different languages spoken. 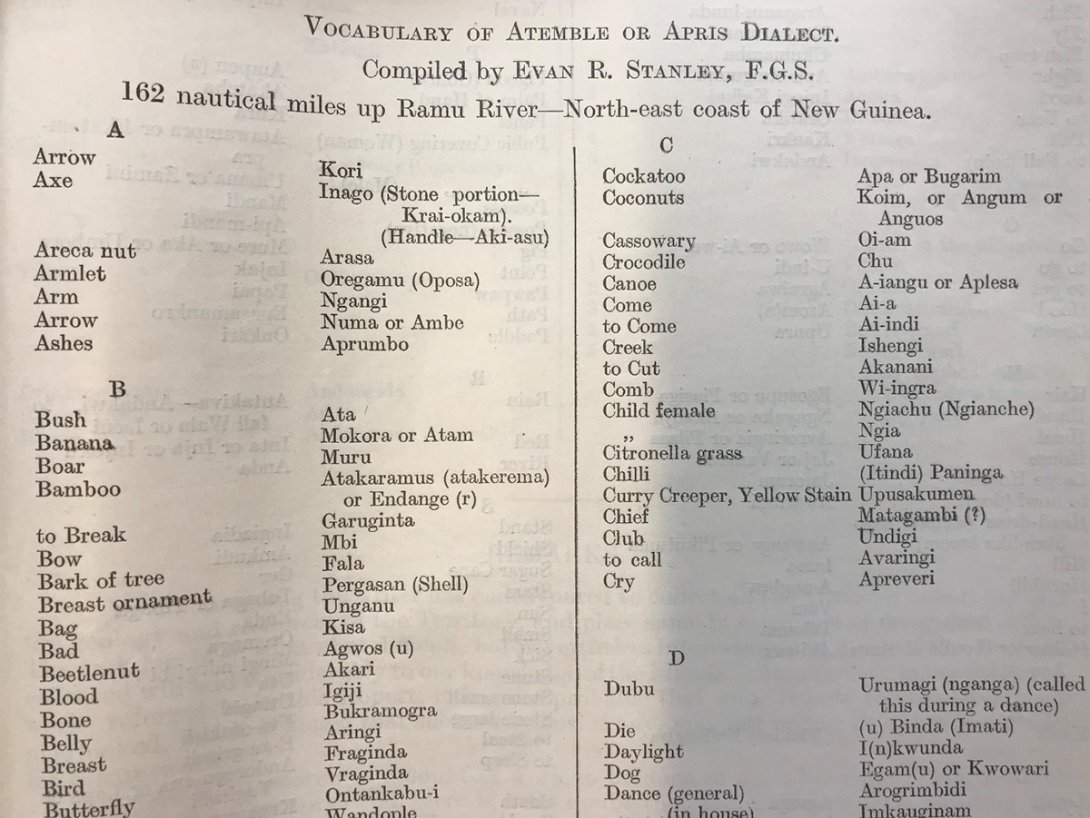 'Vocabulary of Atemble or Apris Dialect', in Report on The Salient Features and Natural Resources of the New Guinea Territory including Notes on Dialectics and Ethnology by Evan R. Stanley (Melbourne: Government Printer, 1923), nla.cat-vn1049942

It wasn’t all observations and notes, however. The Vailala petroleum area held very real dangers in the sodden ground. A person might wander unwittingly around gas vents and sink beyond help into the morass . Some of the vents reached depths of over thirty-five feet (ten metres). The result of falling into this mud-and-oil mixture is too horrific to imagine. 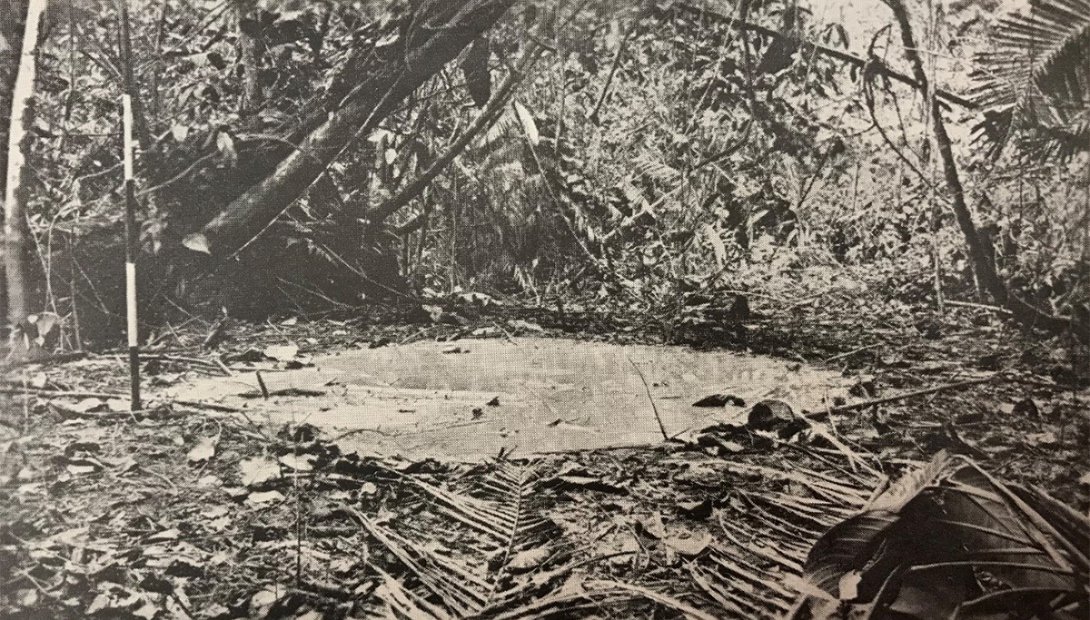 The Ramu River, one of Papua’s largest, was swift and perilous, full of shallows and snags. Stanley encountered whirlpools in narrow channels. The currents were so fast that the men had to steer the boat stern-first on the return journey. This allowed the anchor chain to drag along the riverbed, slowing the boat down and preventing it from getting swept side-on.

Mr W.J. Jackson, Australasian Films, A Closer View of the Snags, 114 1/2 Miles from Mouth, in Report on The Salient Features and Natural Resources of the New Guinea Territory including Notes on Dialectics and Ethnology by Evan R. Stanley (Melbourne: Government Printer, 1923), nla.cat-vn1049942

Stanley’s explorations produced a wealth of information, both geological and cultural, from which he was able to make recommendations to the Australian government about the natural resources and potential of Papua New Guinea. His ‘Hints to Scientific Explorers in New Guinea’, a chapter written for H.A. Brouwer’s Practical Hints for Scientific Travellers (1925-29) contains some riveting advice gained from firsthand experience.

Stanley’s collection of over 90 lantern slides of New Guinea is a precious visual record of indigenous cultures at the time.

Rich with early twentieth-century history, Evan Stanley’s documents a region’s abundance in natural resources, the presence of its indigenous peoples, and signs of contact with Europeans. Complementing each other, his maps and writings enlighten and enrich those interested in learning more about Australia’s near neighbour, Papua New Guinea, and their evolving relationship. For me, what began as uncertain fumbling with old maps, became a fascinating educational voyage into worlds which, though new, prompted memories from my own past.

I would like to thank Susie Russell and staff of Special Collections and Main Reading Rooms for their assistance.