Writing your family history
Bringing the story to life 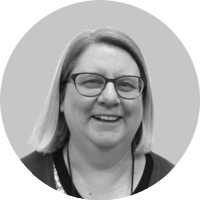 A history of the Higges, or Higgs family of South Stoke, in the county of Oxford and of Thatcham, in the county of Berks and their descendants is one of those rare things: a full record of a family history from the time of the dissolution of the monasteries to the 1930s.

It was written by William Miller Higgs, who drew on research from various other family members (there is an online version at the Internet Archive). While it contains an abundance of detail, many pages are what we may come to expect: a list of names and dates.

Pages 200 to 206 show the Australian branch of the family, and there are a few names here that we know have interesting stories behind them. But rather than the stories in the book, I wanted to look at the story of one particular copy of the book, and how it came to be in the family.

A history of the Higges, or Higgs family of South Stoke, in the county of Oxford and of Thatcham, in the county of Berks and their descendants : being also a record of one of the yeoman families of England / by William Miller Higgs, page 202 nla.cat-vn7890207

As always with family histories, the first advice is to ‘start with what you know.’  In this case, the family story is that Grandpa Fred received a letter from England to ask if he would like to purchase a copy of the book. He was happy to buy one because ‘his name was in the book’ (on page 202, shown above). He knew of a maiden lady who was going to London for the Coronation, so he asked her to collect it for him and bring it back to Lilydale, Victoria.

The book (the family calls it “THE BOOK”) was published in 1933, and includes a list of subscribers who assisted by contributing to ‘the heavy cost of printing.’ In an early form of crowd funding, each subscriber was sent a copy of the book. While a number of Australian subscribers are listed at the start of the book, Grandpa Fred’s name does not appear here; his copy came later.

Who collected the book?

I wondered if it was possible to confirm the name of the lady who undertook the journey to collect the book for Grandpa Fred. The coronation of George VI was in 1937, and there was much celebration in Australia around the May 12 date. Trove newspapers has many stories of coronation parties and concerts, and the social pages are filled with names of people who are preparing for their once in a lifetime trip.

After a few false starts, I found that adding ‘Lilydale’ to my search of the coronation, limiting to 1937 and Victoria, gave me a name: Miss Hutchison. 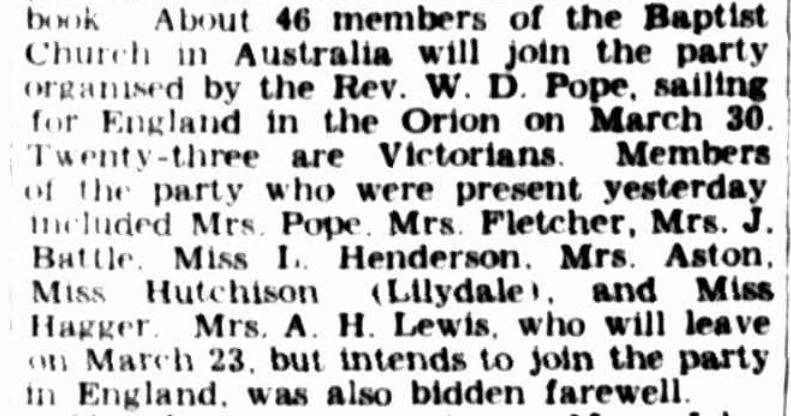 Miss Hutchison of Lilydale was one of a party of organised by the Rev. W.D. Pope to travel to London for the Coronation.

The connection with the Baptist Church also lined up with known family history, so I followed up with a search of the electoral rolls for Lilydale. In 1936, Winifred May Hutchinson (not 'Hutchison' as reported) lived in Albert Hill Road, the same street as Grandpa Fred.

Miss Hutchinson, along with the Rev. Pope’s party, travelled on the Orient Line’s Orama (not the Orion as reported in The Argus). It left Melbourne on 30th March and was the last liner to arrive before coronation day, on 6th May.  This was relatively easy to check using the Passenger lists on Ancestry.com. The list for the Orama also confirmed the initials for Miss W.M. Hutchinson.

The trip of a lifetime

I was fairly sure I had the right name, and I wondered what it would be like for this lady, a spinster living with her family, to take this amazing trip. Going back to Trove, I found several advertisements for coronation trips on the Orient Line, ranging from The Australia New Zealand Coronation Tour at £185 to the much more manageable Tourist class from £30 one way. According to the RBA’s Inflation Calculator, these tickets at today’s prices would have cost $17,366.84 and $2,816.24 respectively.

The National Library has a number of items regarding shipping and travel; an earlier blog shows some from the Matson Line.  But Miss Hutchinson took the Orient Line, leaving from Station Pier, Port Melbourne, with crowds to see them off amid a web of multi-coloured streamers, as described in an earlier sailing here. 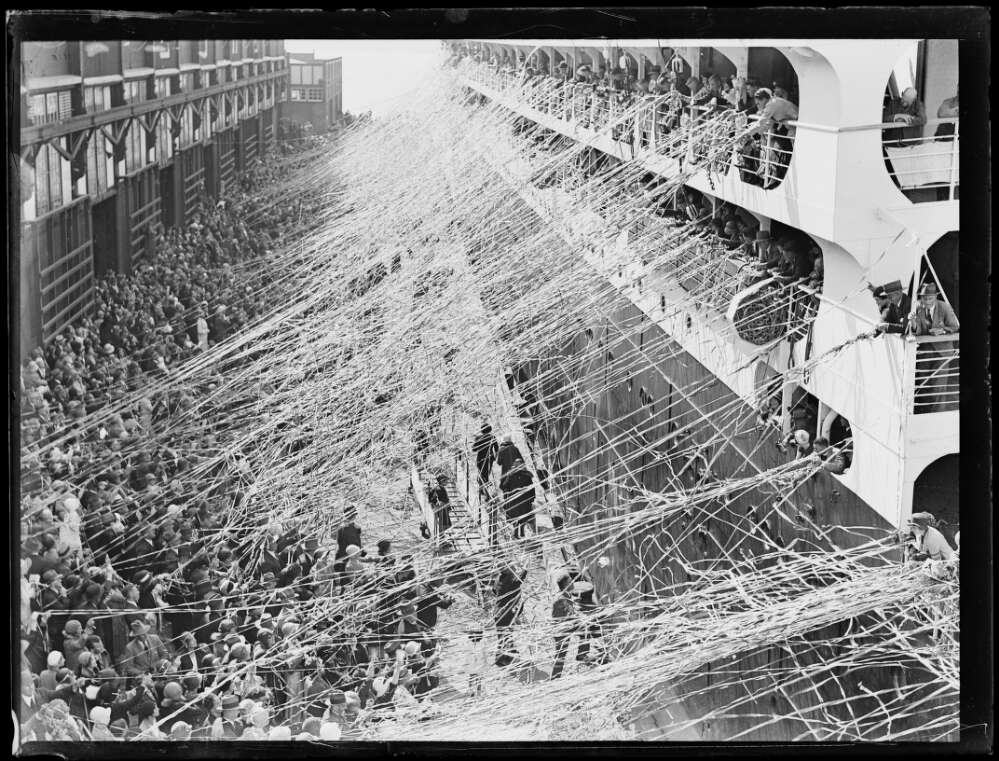 The Library’s ephemera collections on passenger ships and cruise lines are wonderfully evocative of shipboard life in a bygone time. There are several brochures and images in Shipping - Orient Line : ephemera material collected by the National Library of Australia. 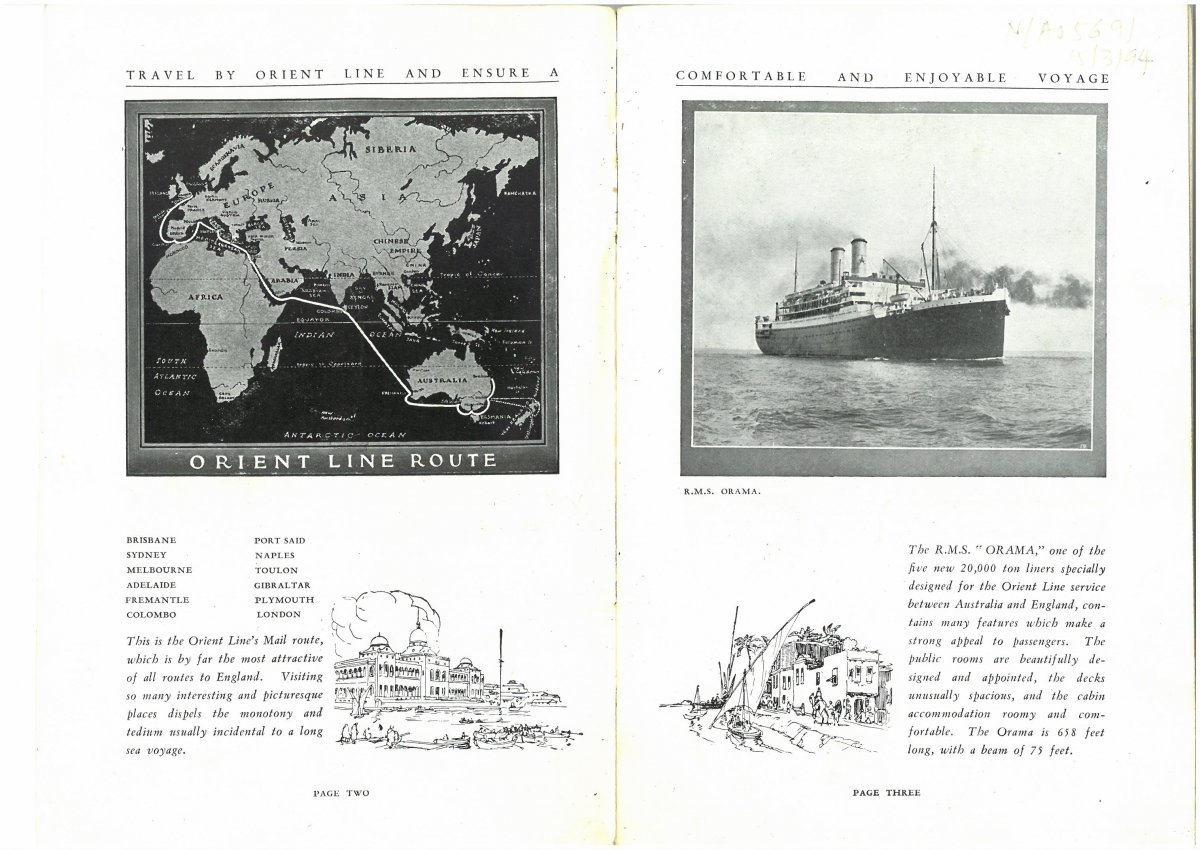 Orient Line: Royal Mail Steamers in Shipping - Orient Line : ephemera material collected by the Natonal Library of Australia. These pages show the Orama and the route to London.

I would have liked to find a bit more about Miss Hutchinson’s stay in London. The passenger list shows her address as “c/o Rev. Pope, 4 Southampton Row, London.”  I believe this was Baptist Church House*, which housed the offices of the Baptist Union, so more likely to be a contact address, not a place for her to stay.

* Coincidentally, the firm of Higgs and Hill worked on Baptist Church House. William Higgs of this firm was apprenticed to his uncle Joshua Higgs, who immigrated to Australia in 1851 (see pages 137 and 200 of ‘the book’).

The Rev. Pope may have arranged accommodation, but looking at the London newspapers through Gale NewsVault, I found that accommodation was not considered a problem, and Londoners were ready to welcome their visitors. This was also reported in Australia papers. 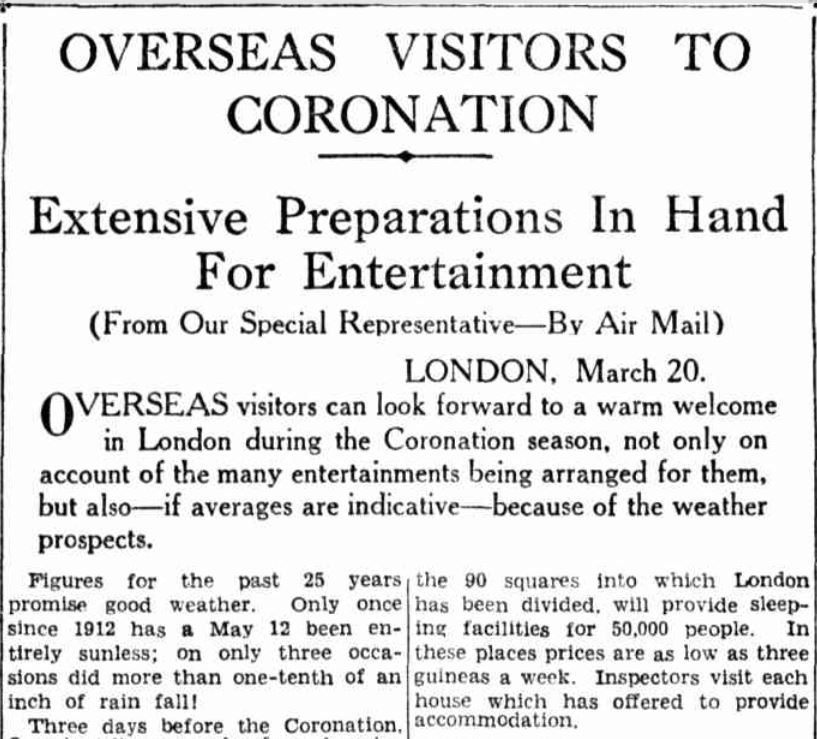 No doubt Miss Hutchinson enjoyed the special atmosphere and possibly purchased one of the many coronation souvenirs on offer. The coronation of Their Majesties King George VI & Queen Elizabeth, May 12th 1937 was printed for the Australian marked, priced 2 shillings, but was available in England. 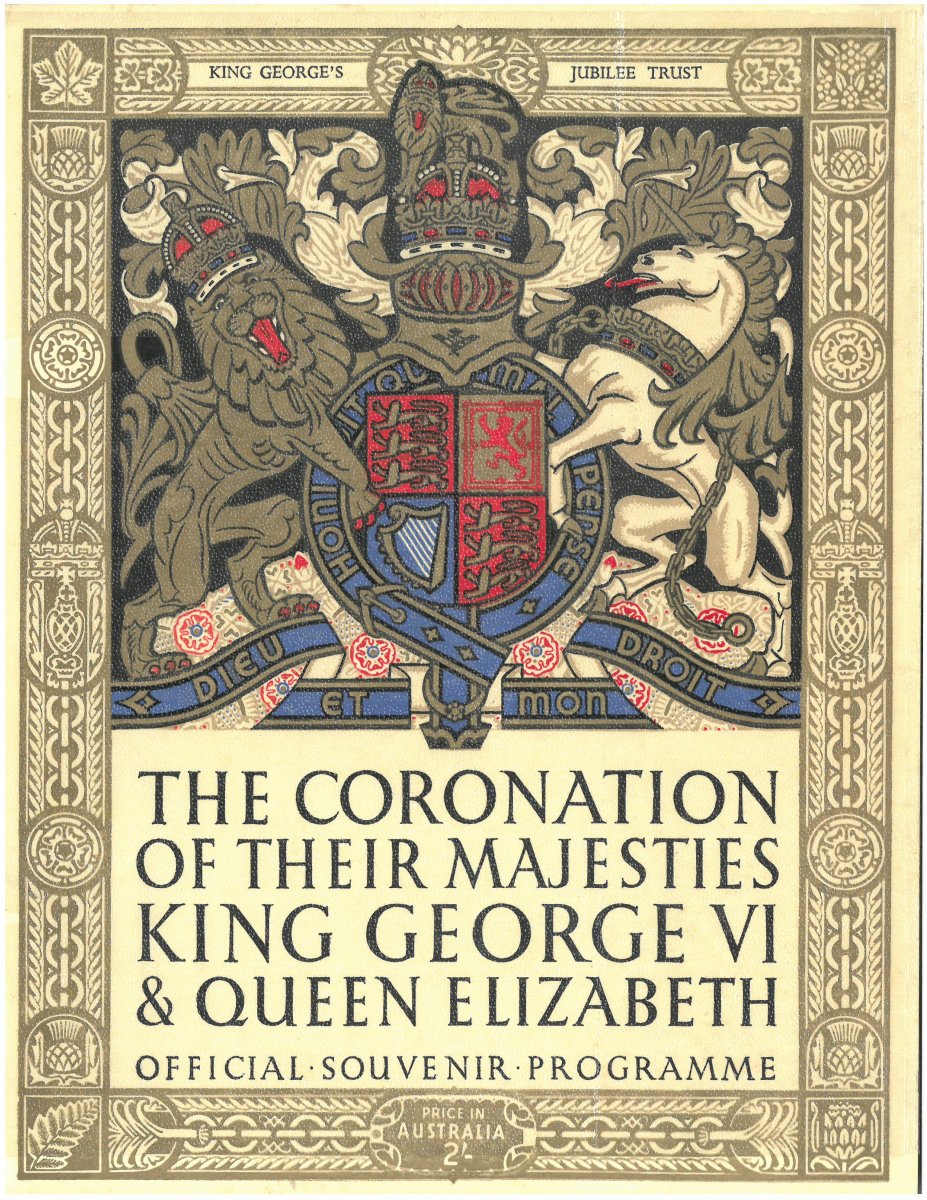 The souvenir programme shows the route map of the procession of the king and queen; no doubt Miss Hutchinson was somewhere along this path, hopefully with a good vantage point. 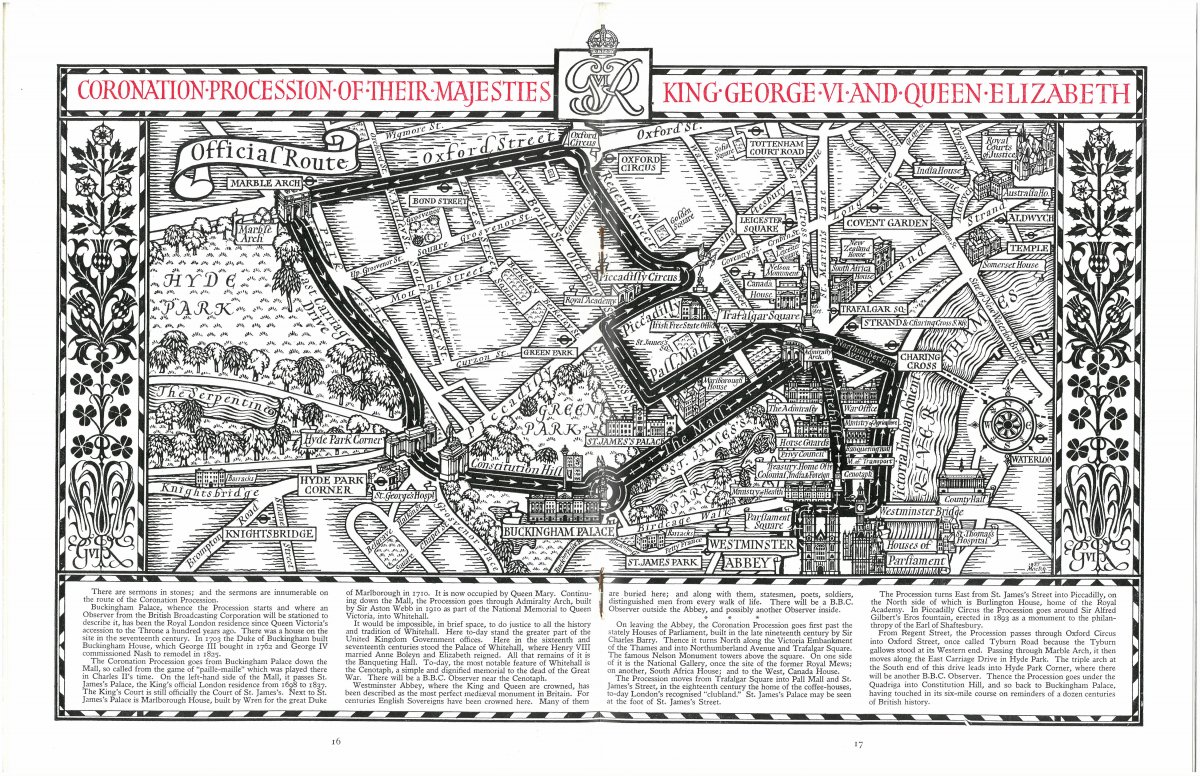 While staying in London, Miss Hutchinson needed to find her way around. This was important for our story, as she had to collect Grandpa Fred’s copy of ‘the book’. The book’s author, William Miller Higgs, lived in Goring on Thames, South Oxfordshire, which is some distance from London. It may have been more likely that she collected it from the offices of the publisher, Adlard and Son Ltd., 21 Hart St, WC 1. She would have found this was a ten minute walk from Bank, if she used the London Underground.

In 1937, Miss Hutchison could have used the newly designed (1933) Map of London's underground railways by H. C. Beck. 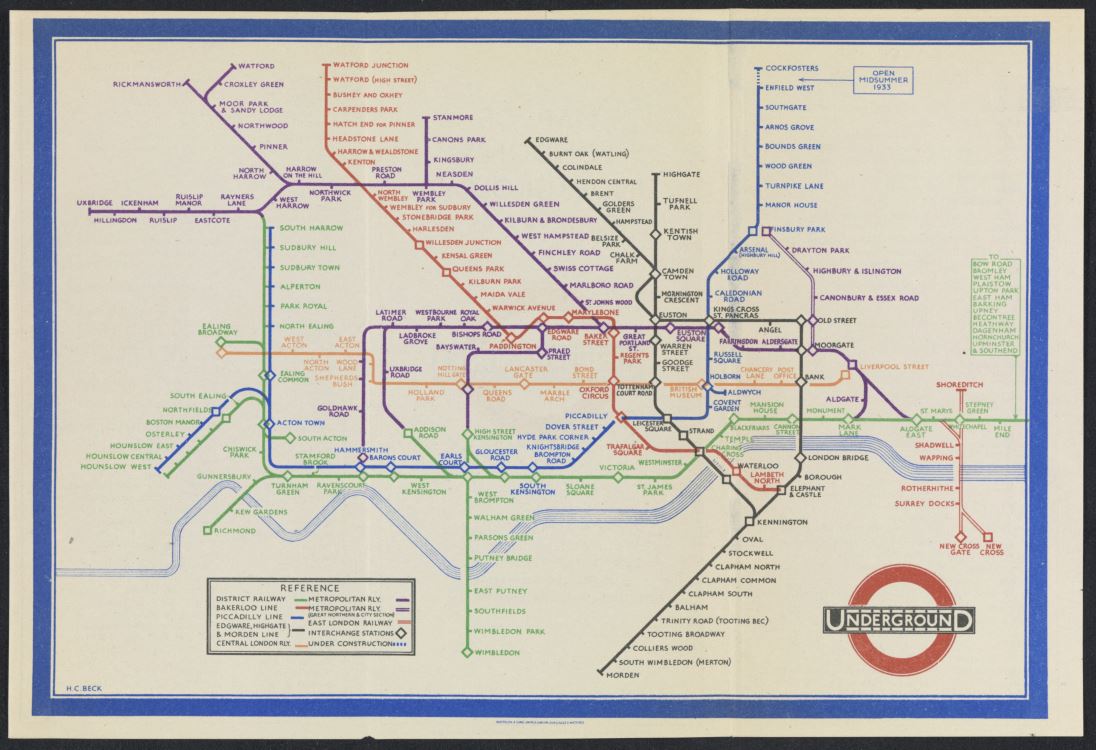 To get an idea of some of the sights Miss Hutchinson encountered, we can search the Pictures collections for 1930s images of England. 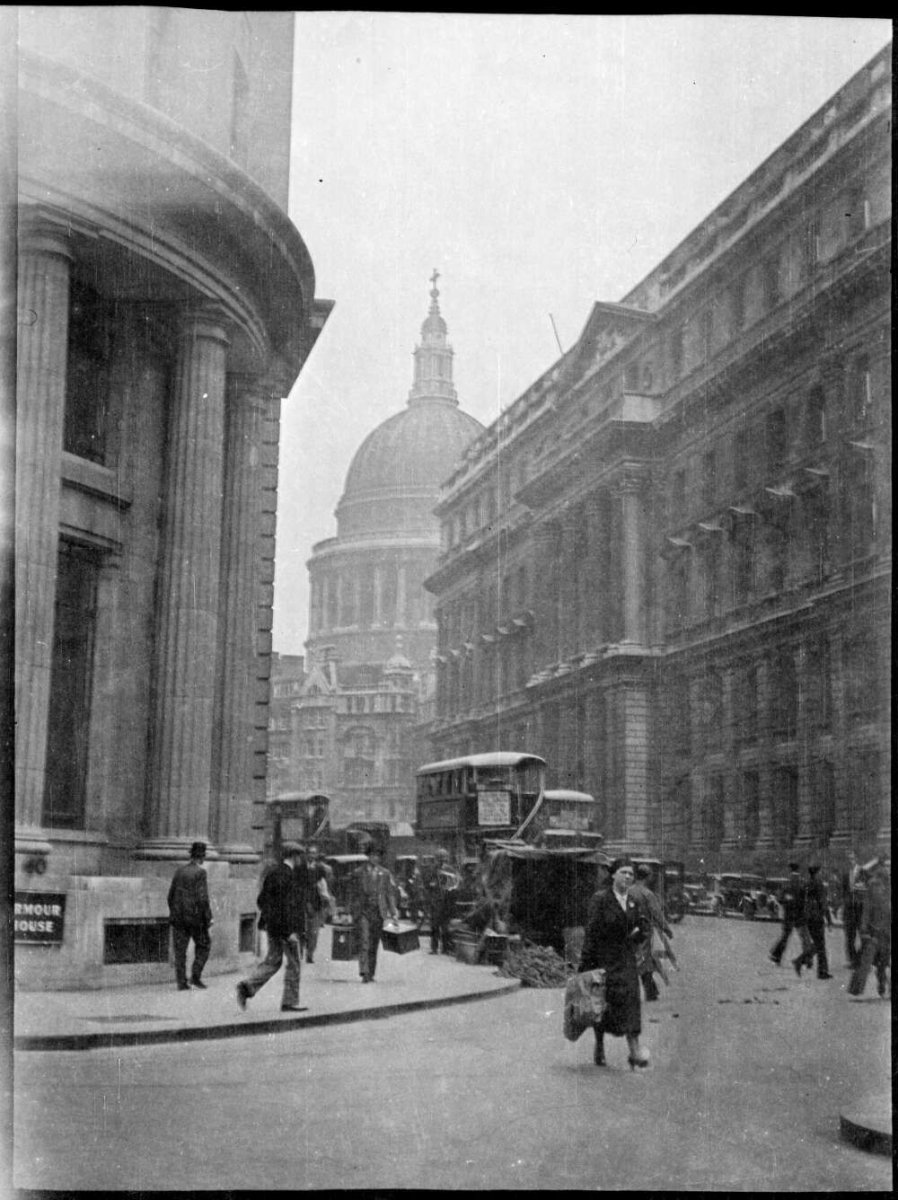 Miss Hutchinson extended her trip for several months. The passenger lists show that she returned to Australia on the Orford in December 1937. The Rev. Pope and his family had returned in September, so she would have made other arrangements, perhaps to visit relatives or to tour the continent.

The arrival back in Melbourne after such a long trip was another memorable occasion. According to several reports, a favourite pastime of Melbourne citizens was to meet the liners at Station Pier, and on December 12 the Orford was met by one of the largest crowds in years. 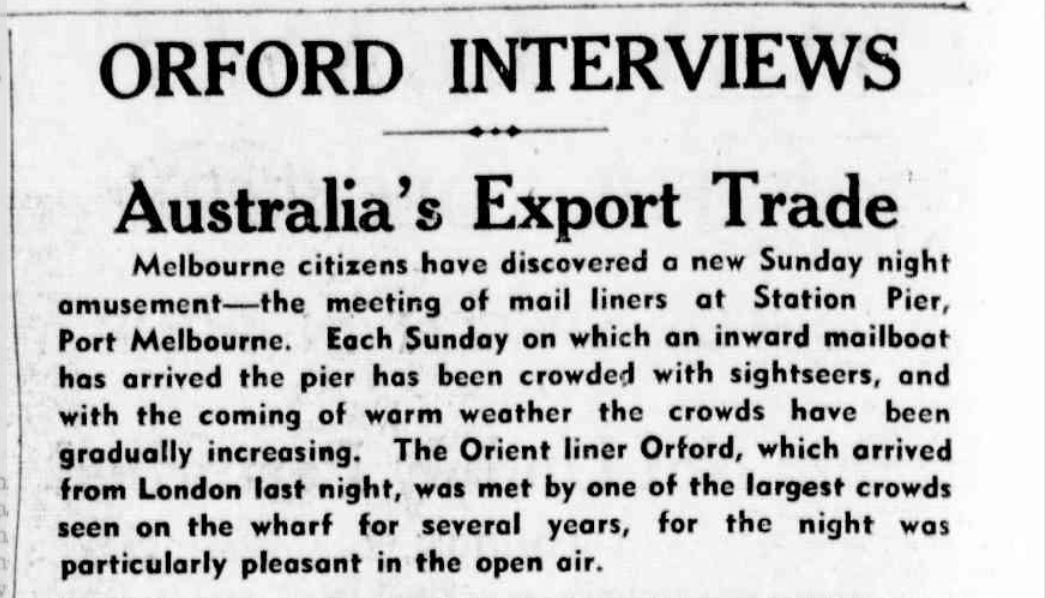 I like to think that Winifred had a long life (I have not found a marriage or a death notice for her) and that this trip was remembered as a special time for her. I know that Grandpa Fred, after waiting several months to see it, treasured the book she brought back.

It can be great fun to look more closely into your family anecdotes to find interesting stories. The Library’s collections have a wealth of material to help you flesh out your family history. If you need some suggestions, just Ask a Librarian.

* Edit, 16 March 2020: Since the publication of this blog, I have learned from a family member that Winifred Hutchinson was from a well-known shopkeeping family in Lilydale. After she returned from her trip, she went back to Lilydale, married in 1942 and lived in the family home until her death in 1964.