In the first decades of the 20th century, a trend developed in Australian art for romantic, sentimental pictures of the built environment from the colonial past, particularly that of Sydney. It was inspired by a growing interest in the newly federated Australian nation’s own history and heritage, but also because the buildings of Sydney’s early colonial period were fast disappearing. The continuing development of Australia’s cities, new architectural trends and a desire to turn away from our convict past led to the demolition of many historic buildings. The impressive Georgian buildings of the early 19th century were considered unrefined and uninteresting compared to the overly ornamented edifices of the late Victorian period. Furthermore, in 1900 there was an outbreak of the bubonic plague in the slums of Sydney, followed by a large-scale clean out of historic areas like The Rocks.

The National Library of Australia is fortunate to have in its collections works by three artists – Lionel Lindsay, Harold Cazneaux and William Hardy Wilson –  who responded to these changes by creating  beautiful images of old Sydney and its grand colonial buildings. Each artist has several works featured in the National Library exhibition Australian Dreams: Picturing Our Built World. Drawing exclusively from the collections of the Library, the exhibition explores how our built environment has been documented, interpreted and celebrated by some of Australia’s greatest painters, printers and photographers.

William Hardy Wilson was an architect and early campaigner for the preservation of Australia’s architectural heritage. Between 1912 and 1922, Wilson travelled widely in New South Wales and Tasmania, drawing colonial houses. Fortunately, some of the buildings depicted by Wilson survived, such as Old Government House, Parramatta. This Government House, built between 1799 and 1820, was the ‘rural’ alternative to the Government House in the Sydney settlement. It is one of the oldest buildings in Australia. 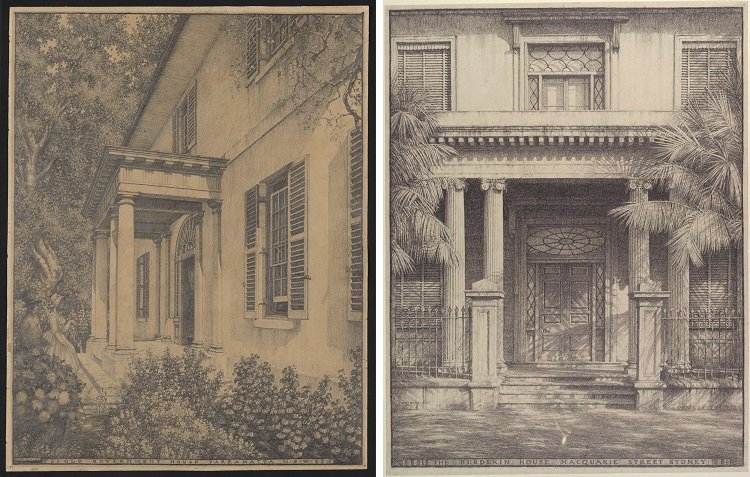 Other significant buildings weren’t so fortunate. Built in 1841, Burdekin House was once considered Sydney’s finest colonial town house. Having survived a demolition threat in 1922, the house was destroyed 11 years later.

Harold Cazneaux and Lionel Lindsay, like Wilson, made memorable images of grand colonial buildings. But they also took photographs and made prints of the more impoverished side of Sydney’s built colonial past. Cazneaux was the foremost photographer working in the pictorialist style in Australia. An international movement, pictorialism considered photography a form of high art closely linked to painting. The impressionistic, painterly quality of Cazneaux’s photos was achieved by manipulating negatives and prints. His pictures of Sophia Street and Margaret Street do more than simply document Sydney’s streets, they turn them into dreamlike stages for everyday human dramas. Some of these buildings may be crude, and the streets dirty, but they are spaces where lives are led. 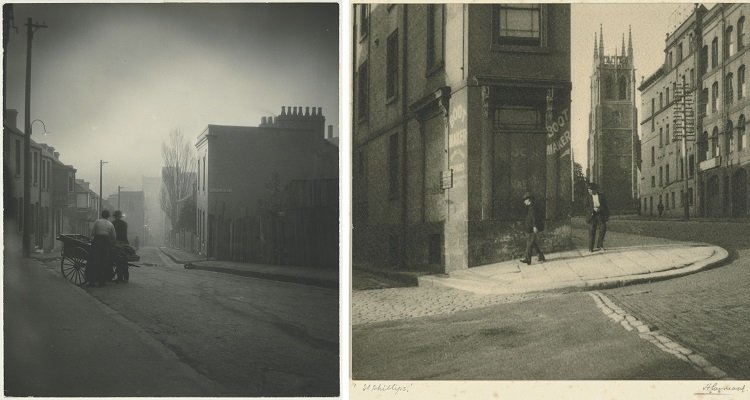 Lionel Lindsay also populated his streets of old Sydney with all manner of characters working, conversing and recreating. Part of the famous Lindsay family of artists and writers, Lionel was a pioneering Australian art historian and printmaker. He was a major figure in the resurgence of etching in Australia as a method for making prints. His favourite subject was old Sydney, particularly the areas around The Rocks.

One of Lindsay’s images depicts the iconic Argyle Cut roadway, which links the Rocks and Sydney Cove (Circular Quay) areas to Millers Point and Darling Harbour. Constructed between 1843 and 1868, it has been a favourite subject for artists and photographers. The cut was widened in the 1920s to accommodate the Bradfield Highway, which runs over the Sydney Harbour Bridge. Many of the streets and buildings were destroyed in the early 1900s in an attempt to disinfect areas and stop the spread of a bubonic plague outbreak. More were demolished in the 1920s to make way for the Sydney Harbour Bridge. 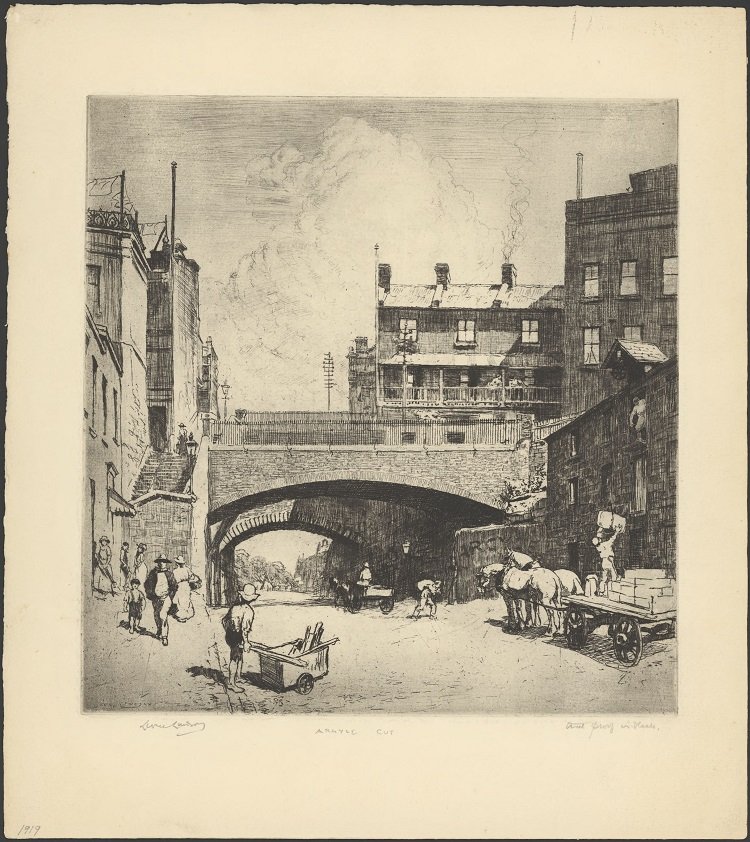 Because of these changes, the Cut now looks very different. In one way, Lindsay’s print functions as a documentary record of the way things used to be. Of course, it would be incorrect to think that the images these artists produced didn’t contain elements of fiction. Wilson’s drawings reimagined the buildings in what he thought would have been their prime, without any contemporary additions. The streets depicted by Cazneaux and Lindsay were not without squalor and suffering. All three artists renovated their images to show some kind of ideal. Maybe that ideal didn’t exist, but these images do have the capacity to make us think differently about our changing cityscapes and see the worth in these old, chipped and faded backdrops to Australian life.