This summer, you’ll see a swathe of great new stories in our Treasures Gallery. Some mark anniversaries in this year like no other. Some objects have rarely been displayed.

If you haven’t visited the National Library of Australia before, the Treasures Gallery is the Library’s permanent gallery space. It's where you will find displays about Australia's history, all drawn from our extraordinary collections. We make changes to it twice a year.

This blog gives a taste of what’s new in the gallery, and invites you to visit us soon. 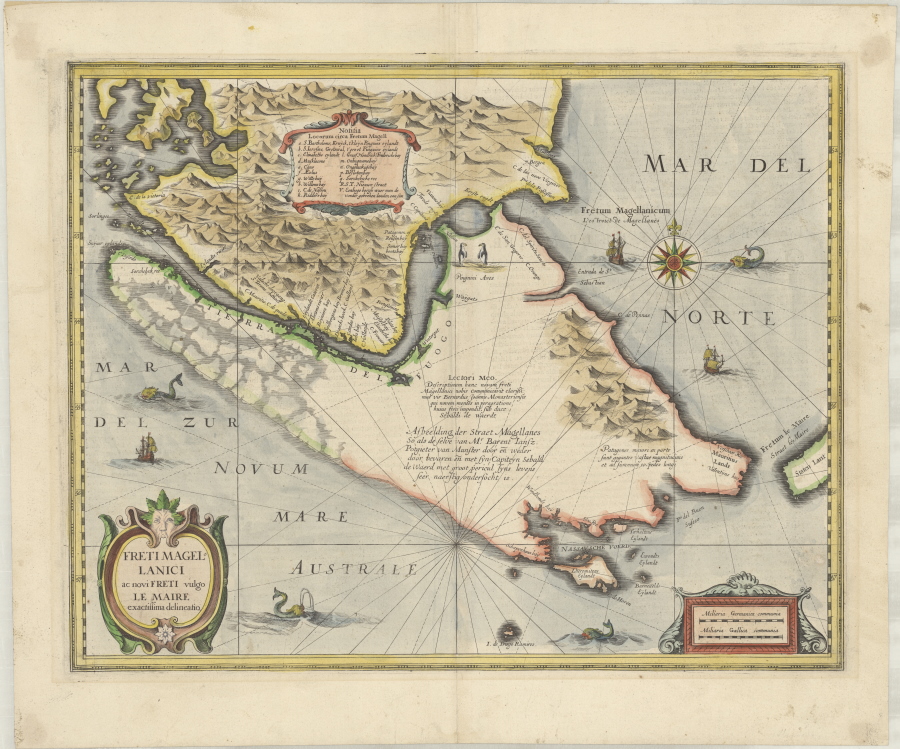 We start with sea monsters and penguins–a decorative map of the Magellan Strait at the foot of South America. It’s the work of Dutch mapmaker Hendrik Hondius, from an atlas published for the luxury market. 500 years ago this year, Portuguese navigator Ferdinand Magellan was circumnavigating the globe. One of his major achievements was alerting Europeans to the safe passage the strait afforded ships from the Atlantic to the Pacific.

To coincide with another anniversary, the visit of James Cook's HMB Endeavour to the east coast of Australia in 1770, we have material relating to the scientific and linguistic work of the Endeavour voyage (1768–1771). A map by William Whitchurch reminds us that the Endeavour voyage was the last of three British voyages to reach the Pacific in the 1760s. Tracks trace each voyage. Accompanying that are three plates from Banks' Florilegium, engravings of botanical specimens collected on the voyage, from Tahiti, New Zealand and Australia. The display also features portraits of three of the Endeavour's scientists—artist Sydney Parkinson, naturalist Daniel Solander and the rich young naturalist who funded them, Joseph Banks.

In another part of the gallery, we have the wordlist recorded by Sydney Parkinson at Waalumbaal Birri (Endeavour River, present day Cooktown, North Queensland). The language is Guugu Yimithirr and offers an extraordinary insight into what must have been extraordinary conversations on the Endeavour voyage. It also includes the word kangaroo, second from the bottom. Nearby is a watercolour of a fish, likely a barred longtom, by Sydney Parkinson, probably taken in north Queensland. A future blog will discuss Parkinson and this exciting new acquisition further. 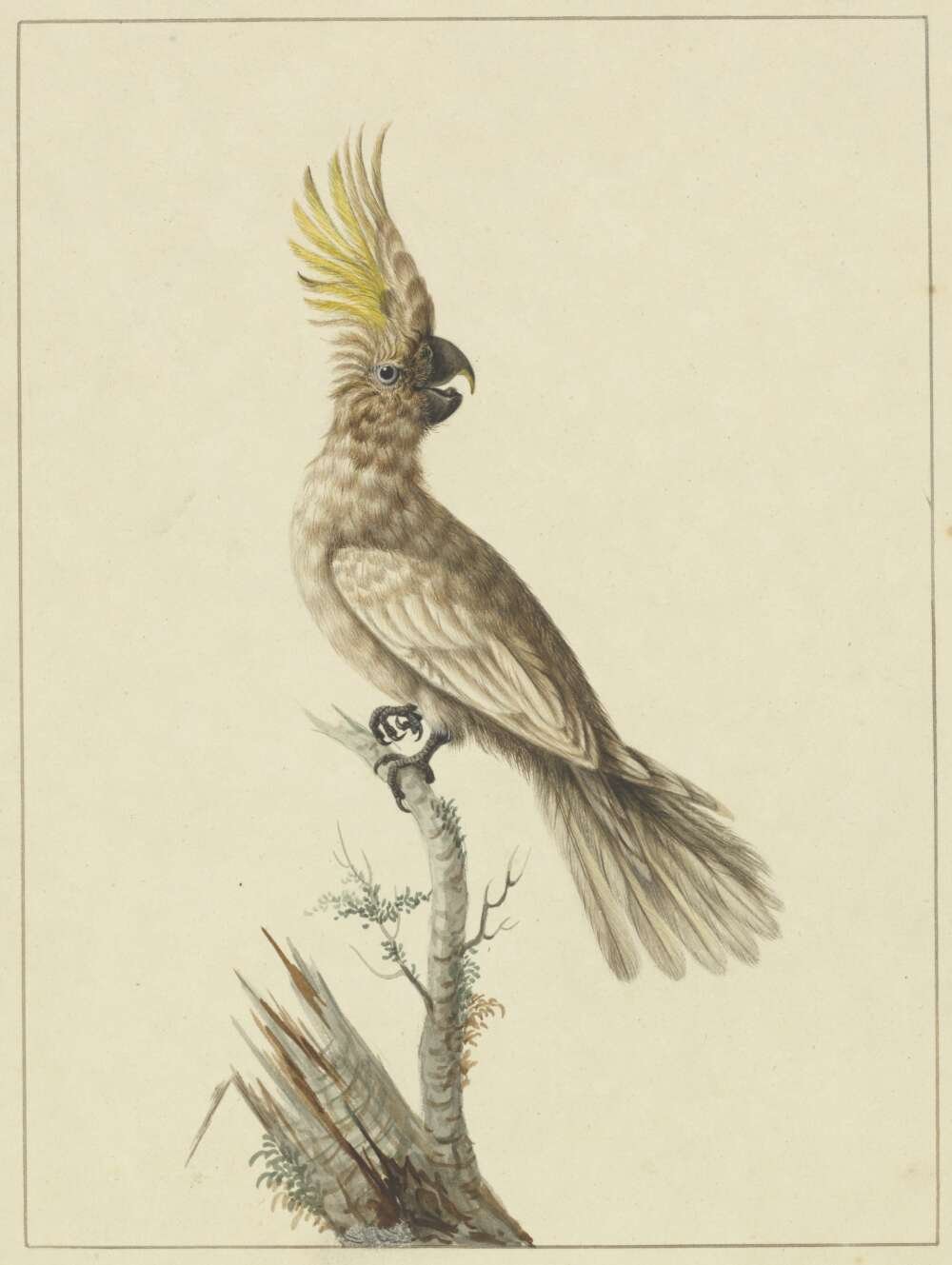 We have refreshed our display of watercolours by Sarah Stone, the English artist who illustrated much of First Fleet surgeon John White’s book of natural history. In addition to three watercolours of birds, we now have watercolours of Australian fish and reptiles. Nearby are two watercolours by Augustus Earle (1793–1838), who lived in Australia in the mid-to-late 1820s. One features the Female Orphan School at Parramatta. The school opened in 1818 and took girls from a wide range of backgrounds, from ages 2 to 13. It was Australia’s first welfare institution, and aimed to prepare girls for domestic service. Earle himself gave money to the school in May 1828. 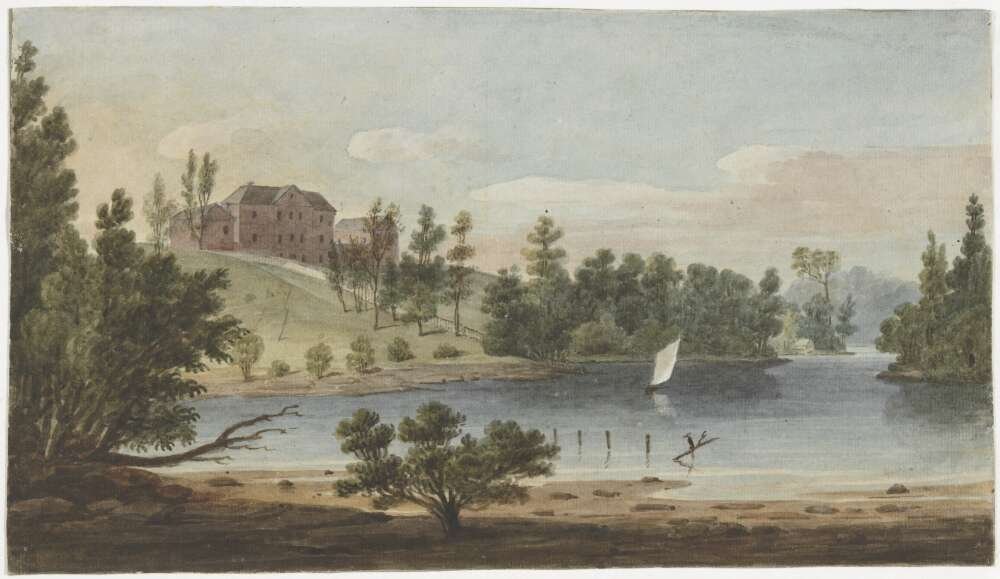 One of my favourite additions to the gallery is this modest flyer, a broadside bearing the title, The London Convict Maid. We see a woman, in profile, above verses telling the sorry story of a maid who stole from her master, was convicted and sentenced to seven years transportation. The broadside says that from Hobart, she ‘sent her mother a very affecting and pathetic letter, from which the following verses have been composed’. This is one of the ten verses:

Far from my friends and home so dear,

My punishment is most severe,

My woe is great and I’m afraid,

That I shall die a Convict Maid.

The broadside claims to be a warning to other women. Such tales of woe were popular at the time. 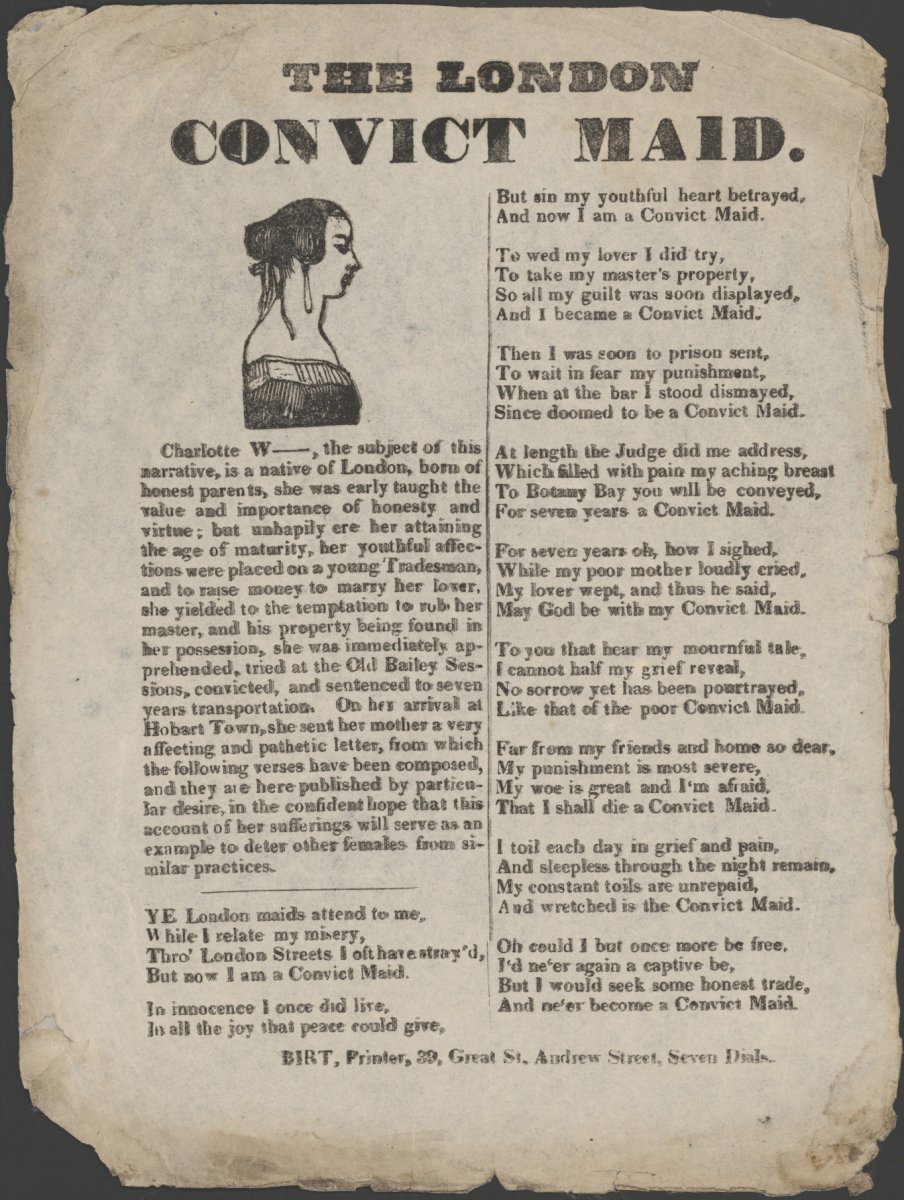 Indeed the printers, the Birt family, were prolific between the 1820s and 1840s. For other examples of their work, see the digitised holdings of the Bodleian Library, Oxford. The Birts operated from Seven Dials, a junction in London close to Covent Garden. Writer Charles Dickens described the area as ‘streets and courts [that] dart in all directions, until they are lost in the unwholesome vapour which hangs over the house-tops and renders the dirty perspective uncertain and confined.’

Our display about Federation has new objects, including several from the papers of Alfred Deakin, who became Australia’s second Prime Minister. Also included is the small sketch in oil for Tom Roberts’ ‘big picture’ showing the Duke of Cornwall and York opening Australia’s first Federal Parliament at the Exhibition Building in Melbourne on 9 May 1901.

Photographs by Wolfgang Sievers document the construction of the Snowy Mountains Hydro-Electric Scheme. The Scheme was a major undertaking. More than 100,000 men and women worked on the project, many of them newly arrived migrants from over 30 different countries. We know from Sievers' job books, held by the Library, that Sievers was there for the Department of  Trade in July 1957. In his oral history, he explains that Australia wanted to change its image: ‘it was changing from a country of sheep and wheat, for which Australia was known to a country of craftsmanship and skilled workers’. I was drawn to this image of a man in a tunnel, backlit. It puts the scale of the project into relief for me. 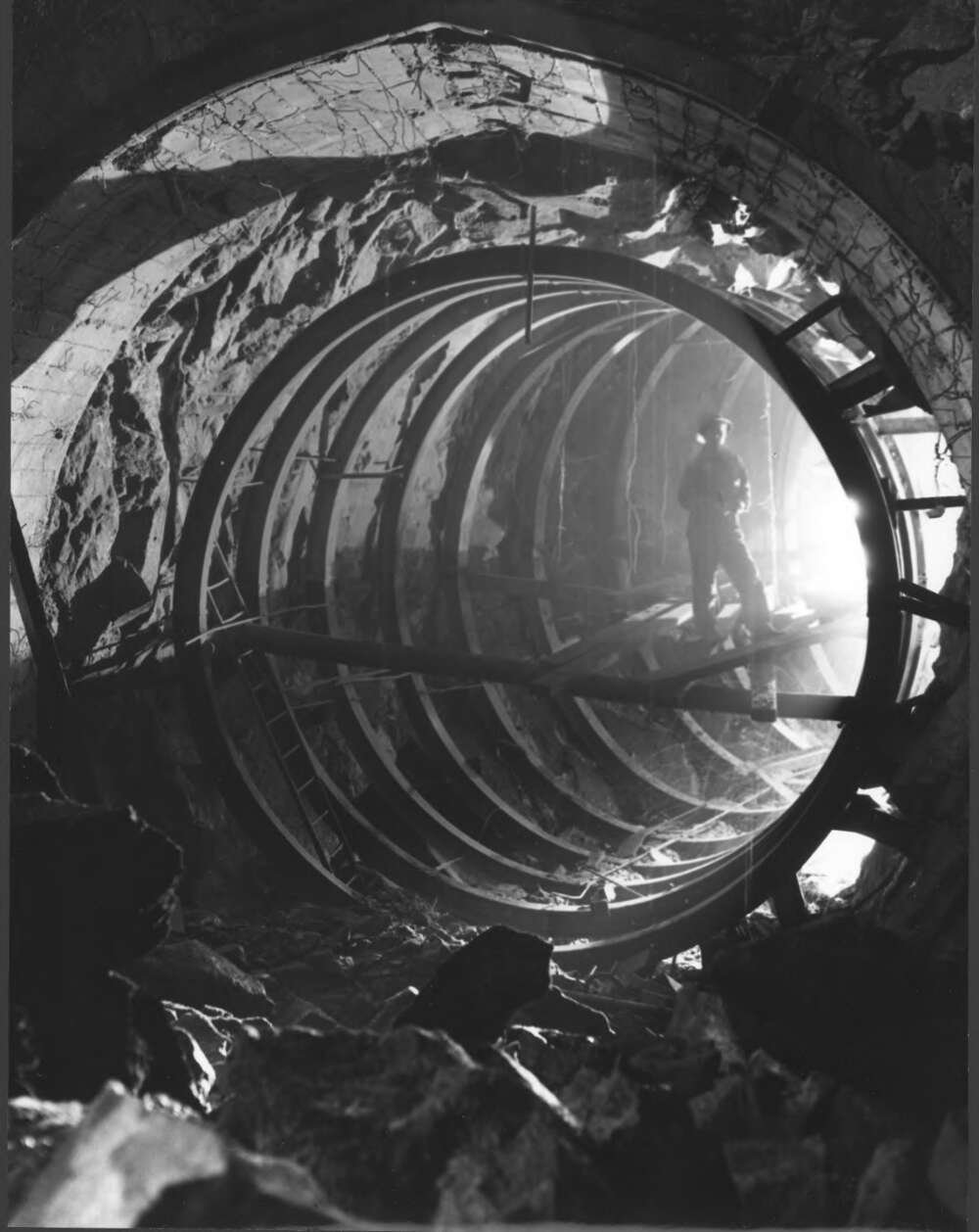 There is also a display about three well-known Australian expatriates, Clive James, Robert Hughes and Germaine Greer. Each left Australia for England as bright young things in the 1960s and achieved renown in the arts overseas. All three became leaders in their fields; all three wrote bestselling books. Each is represented by a portrait, and some of their most famous books. 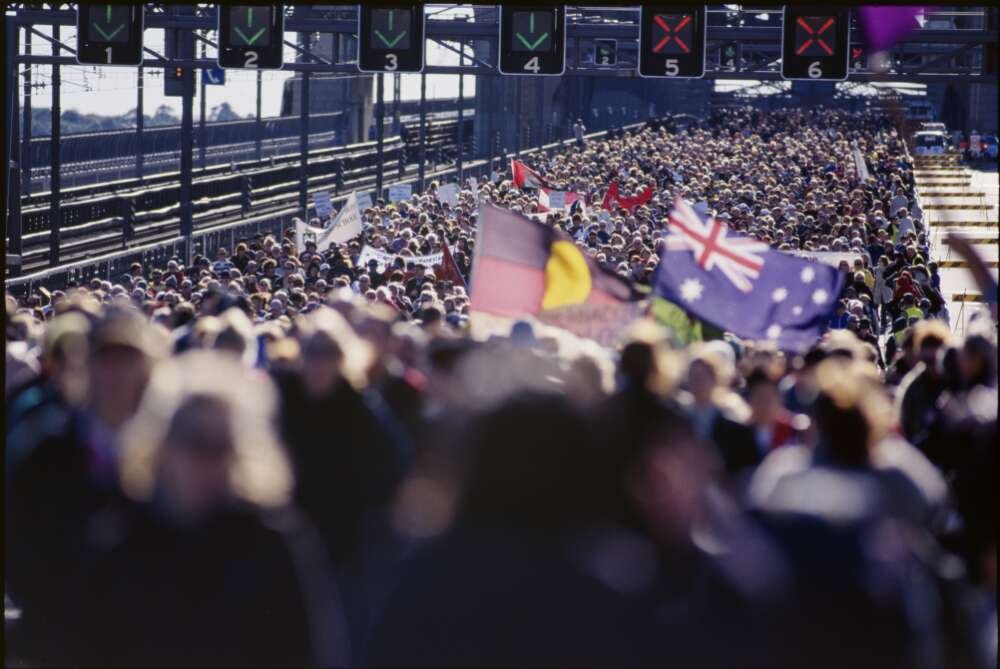 Four photographs about the Bridge Walk Anniversary now join the remaining display about the 2008 Apology. Corroboree 2000 was a two-day event for Reconciliation held in Sydney on 27 and 28 May 2000. The final day’s walk across the Sydney Harbour Bridge was a highlight for many. The event has come to be seen as a critical and constructive step in Australia’s Reconciliation history. The Library's photographer Loui Seselja was there on the day.

The last new display in the gallery is about Bob Hawke, Australia’s longest-serving Labor prime minister. He rose to prominence as President of the Australian Council of Trade Unions (ACTU) from 1969 to 1980. As prime minister from 1983, he stopped the damming of Tasmania’s Franklin river, established Medicare and floated the Australian dollar. When he died in 2019, many Australian remembered him as a man of the people, famous for his love of beer. On display is a poster from the 1983 election campaign, and a Hawke’s Lager beer can and coaster. Hawke’s Lager supports Landcare Australia, an environmental initiative Hawke launched in 1989. The Library also holds a photograph of Hawke with one such can in hand.

For a full list of what's on display now, click here. We look forward to welcoming you to our Treasures Gallery soon!