I am regularly faced with Ask a Librarian requests for books that readers remember from childhood, but the title and author has been forgotten. These can be fun but sometimes frustrating searches. Due to the nature of memory and time, not all readers can remember everything needed to find the book again; the colour of the cover is unfortunately not very useful.

It is often difficult to remember the precise wording of titles, but readers usually remember a significant name or plot point, as in this case:

I am searching for a book probably written in the 1950s or 60s entitled McGinty's (MacGinty's?) Reef. It is a novel about Pearl Diving in Australian waters. Searching the internet with Amazon (US), ABE books, and Google has produced no results. I would like to purchase this book but do not know how to locate it.

AustLit, the National Library catalogue and Trove searches for McGinty’s Reef, with various spellings, were unsuccessful. I searched again in AustLit for keywords in the description given, such as pearl, diving, reef. This gave quite a few options.

After calling up several possible books from the stacks, I was happy to discover Coral reef castaway by Peter Hallard, published in 1958. It was the Table of Contents that convinced me that I had found the book; see Chapters 6 and 8. 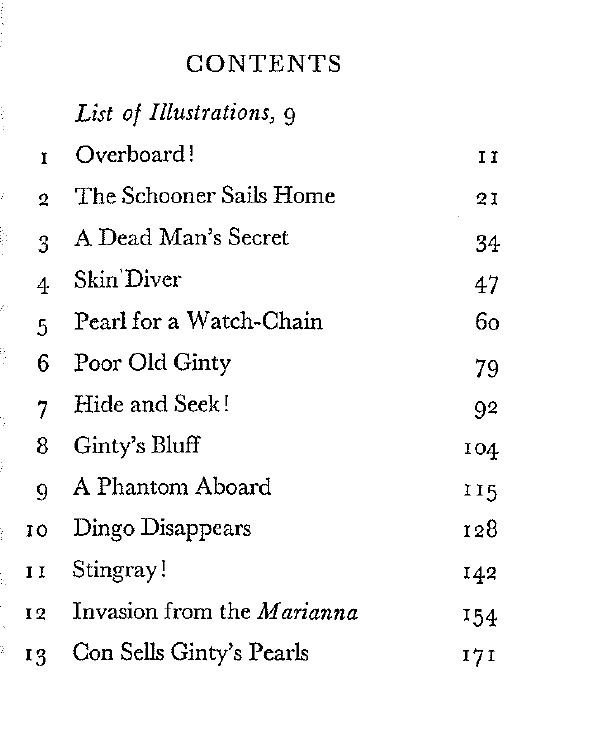 Further online searches revealed a summary of the story, which I could pass on to confirm that this was the correct title. I also found that the given author, Peter Hallard, was a pseudonym for the author Arthur Catherall, and he had published the book under this name in other parts of the world. With this information it might be possible to find a second hand copy for sale.

The next book could not be found, but it did lead to a personally interesting find:

When I was a child in 1975 or nearly that time, I read the German translation of a novel for young adults written by an Australian author. It was the story of a shipwreck near Tasmania. The passengers were mostly female convicts but the female narrator, as well as some of the crew, survived on a very hostile island near Tasmania. Some of the girls were brutal and amoral, inflicting privations to the narrator who even assists a dying companion without material help.

In the search for this book, I harnessed all the usual resources, as seen in the research guide on Australian Literature, which devotes some space to this problem. It includes tips on searching and an introduction to the database AustLit. You can access AustLit by visiting our eResources portal and searching for this resource under the Databases A-Z tab. Australian children's fiction : the subject guide by Kerry White is a useful print resource for finding these books.

Even with these resources, using various keywords and subject headings, I could not find an exact match for the story. Those that were even faintly similar had other issues, such as not matching the date given, or not having a female narrator.

Two authors were possibilities, Nan Chauncy and Hesba Fay Brinsmead; both of these had works translated to German, but their stories seem to be for younger readers. Unfortunately, I had to put this question in the dead end category.

However, while looking over some of the books I hoped would fit, I remembered a story I read while growing up in Tasmania, probably borrowed from my local public or school library. It was about a family who migrated to Australia from England. “Father” was happy to be known as “Dad,” but “Mother” did not want the children to call her “Mum.” She settles on “Momps” for a name, which I didn’t think was much better. That was all I could remember from the story.

I hadn’t bothered to undertake my own search for this barely-remembered book, but suddenly here it was: Half a world away by Nan Chauncy. 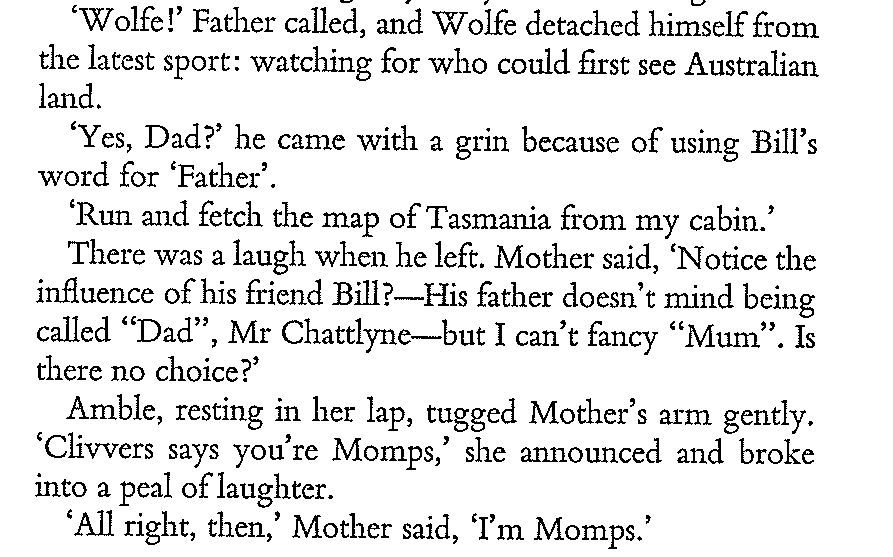 Another sought-after book had a slightly misremembered title and was a fun challenge:

Looking for an Australian comic-SciFi novel I read growing up in Nambour, QLD.   The novel was written by a well-known TV newsreader and host of talk shows and current affairs in the late-60s to (at least) the early-70s, when my dad was transferred to the UK.
It's about an alien who lands in Australia in his space ship -- he has been tasked with sending back reports to see if Earth is worth invading.
The alien takes his name from misunderstanding a Post Office sign -- also the name of the book: something like - "Psst Off" or "Psst Ogf" or "Psk Oggf" -- I cannot remember exactly.

Our usual search methods, using subject guides, bibliographies and databases, did not give any useful results. Options for searching in the Library catalogue include:

All these tricks were unsuccessful, but a combination of an internet search for a TV personality and our Catalogue finally found the answer:

Ogf : being the private papers of George Cockburn, bus conductor, a resident of Hurstfield, a suburb of Sydney, Australia / Keith Smith ; illustrated by Wep 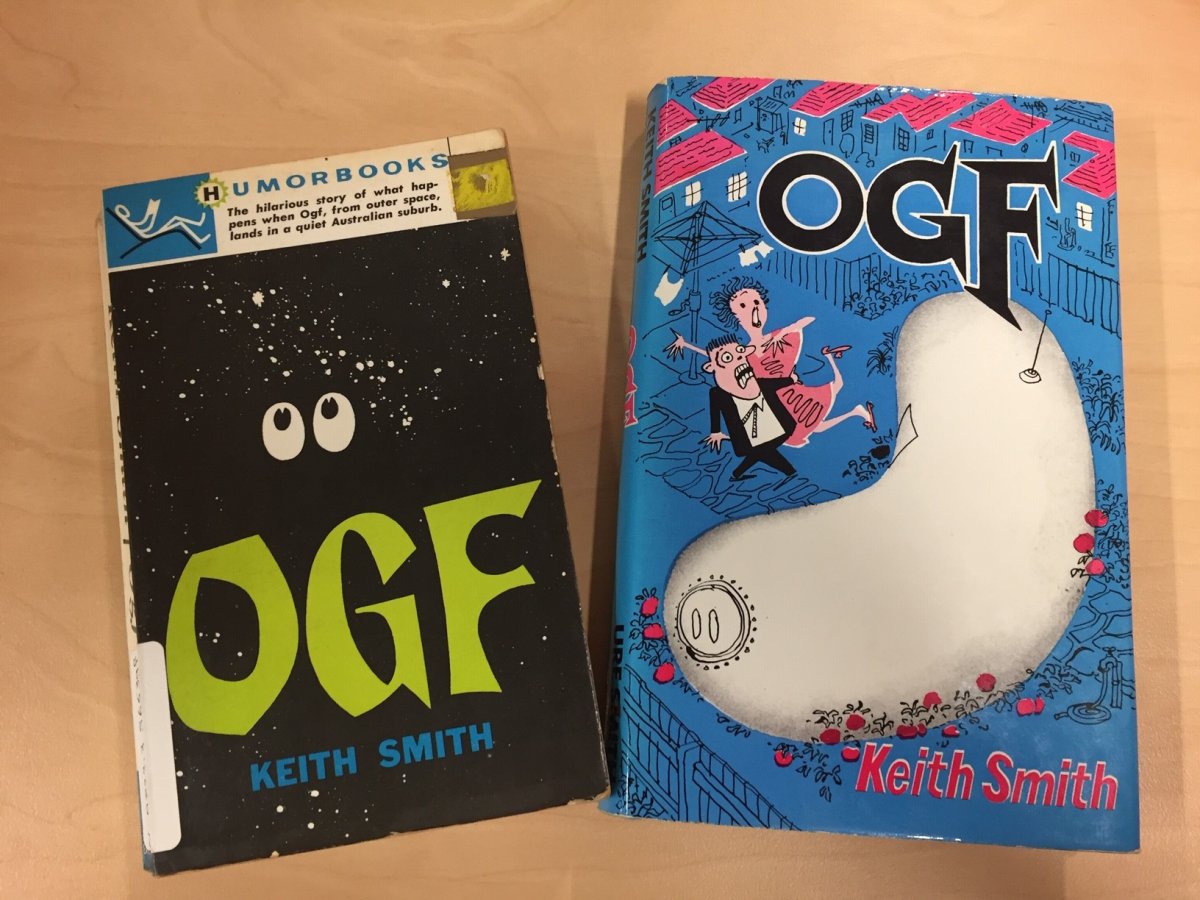 On checking this book I found it is indeed about a 'migrant' named Pssk Ogf who arrived via UFO and lived in Anderson Street with the Cockburns. The television personality and author was Keith Smith. The back of the paperback book confirms “For years one of Australia’s best-known radio personalities, Keith Smith has now joined her select band of humorous novelists…More recently he produced and appeared in a TV series called “instant People”: today he is writing, interviewing for radio and producing documentaries.”

The more searches I complete, the more it becomes clear that ‘creative searching’ is needed. In this case, if I had just search for Ogf, the title would have shown in the Catalogue immediately. But like the reader, I simply assumed that Pssk (or similar) was part of the title.

If you are searching for a book that you remember from childhood, I encourage you to keep trying. Libraries are not your only resource; now there are websites and online forums that included help pages. Try Loganberry books, which includes an archive of found titles.