We are all captivated by a great love story. Researching your family history can uncover unique tales of romance, secret marriages and forbidden love. You may be surprised what records are held at the National Library of Australia that can complete a picture of your ancestor’s love life. There are some interesting stories and records to be found at the NLA. From the first marriage recorded in Australia, to a newspaper article about a romantic proposal by an Australian prisoner of war in Italy to his girlfriend in Australia.

The first marriage documented in Australia was the union between convicts William Parr and Mary MacCormick on 10 February 1788 in Sydney. The ceremony was recorded by Reverend Richard Johnson with permission by Governor Arthur Phillip. Like many convicts, Mary MacCormick was not able to write; she signed her name with an X mark. You can view a copy of this marriage record and other church records in the Society of Australian Genealogists microfilm collection, available in the Newspapers and Family History Zone.

Banns of marriage were public announcements issued by the church of an impending marriage. Churches such as the Anglican and the Catholic Church registered these banns of marriage. During the time of the marriage banns, parish members could dispute any unions. Applications could be rejected for a variety of reasons such as one of the couple was in an existing marriage, or was engaged in a divorce which was not finalised, or the couple were immediate family members, or the couple did not meet the legal requirements of marriage or the parish did not agree with the marriage. In the New South Wales colony, convicts were required to apply for a bann. The church would then decide if a convict could marry.

Intentions to marry, engagements or marriage announcements notices were also published in newspapers. Notices could contain the full name of the bride and groom, parent’s names and addresses, the officiating church to be married at and even a photograph of the wedding. ‘The Telegraph’ (Brisbane), 17 December 1925 issue reported on a unique wedding ceremony in Brisbane. The article describes how the first Australian marriage ceremony was conducted completely in sign language. The marriage took place at the Queensland Deaf and Dumb Mission in Brisbane. The Reverend S.W. Showell, the bride, Edith Morey and the groom, Leslie Watts were all deaf and signed throughout the ceremony.

Newspapers also printed stories about proposals and declarations of love. One unique proposal published by 'The Herald’ (Melbourne), 7 November 1941 titled, ‘Captured digger proposes by Rome radio.’ The article describes how the ‘Apostolic Delegation’ in Sydney picked up a broadcasted message from Vatican City Radio.  The proposal was by Gunner Woolcock, an Australian soldier held in an Italian Prisoner of War camp to his Melbourne girlfriend Nan Mitchell. The proposal message was transcribed as: 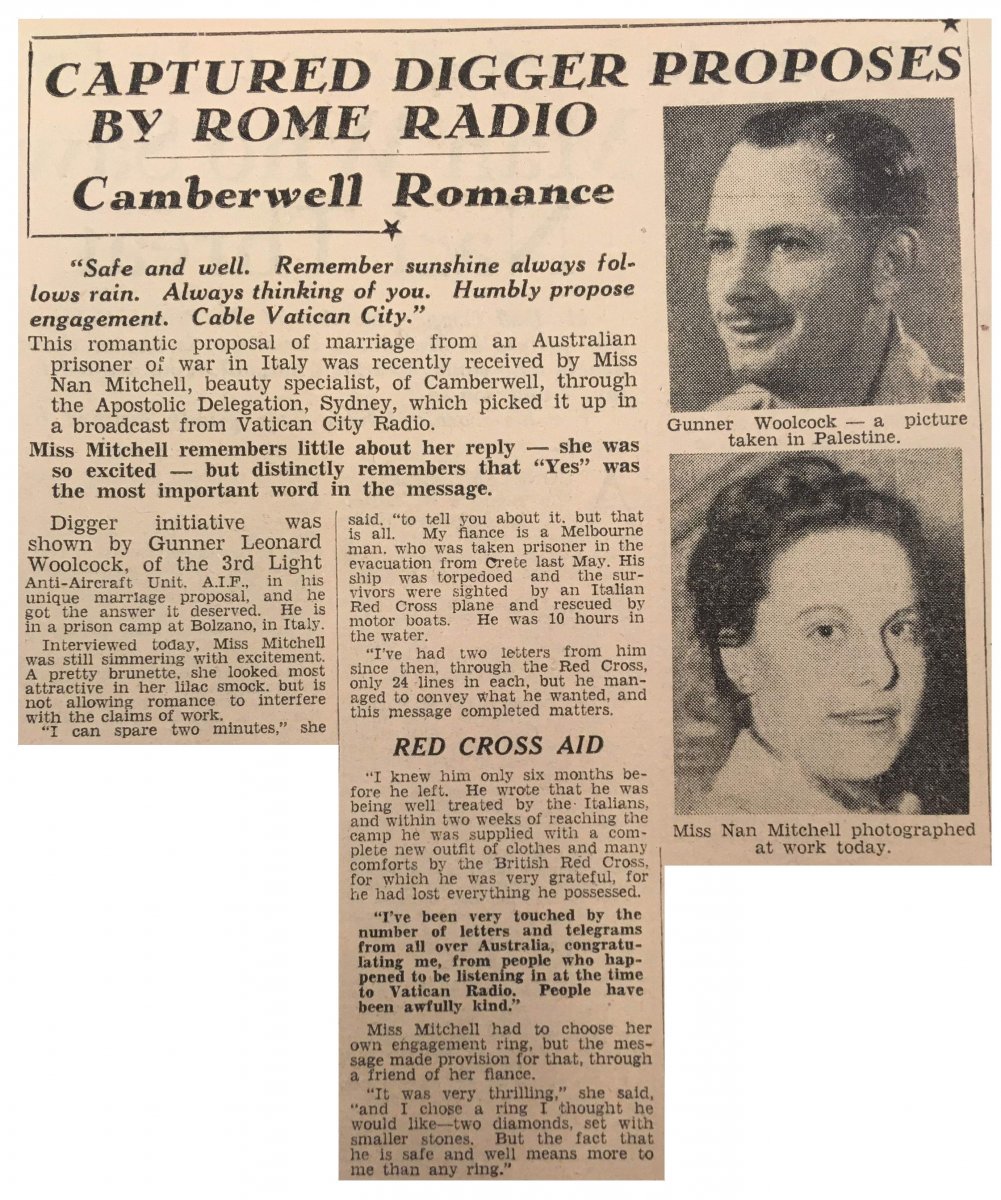 Proposals inevitably lead to weddings. Searching for wedding photos can provide a wonderful source of information for family historians. The date of the wedding, names of family members, physical appearances, the location of the wedding and even your ancestor’s religion are details that can be taken from a photograph. You can search the Library catalogue to find out if the NLA holds your ancestor's wedding photographs. A photographic series held in the collection called ‘Lockhart family's wedding veil and a collection of photographs of it being worn by brides over several generations’, provides well-captioned photographs. The full name of the bride and groom and even the groom’s nickname, date of wedding and location have been provided with this photograph. 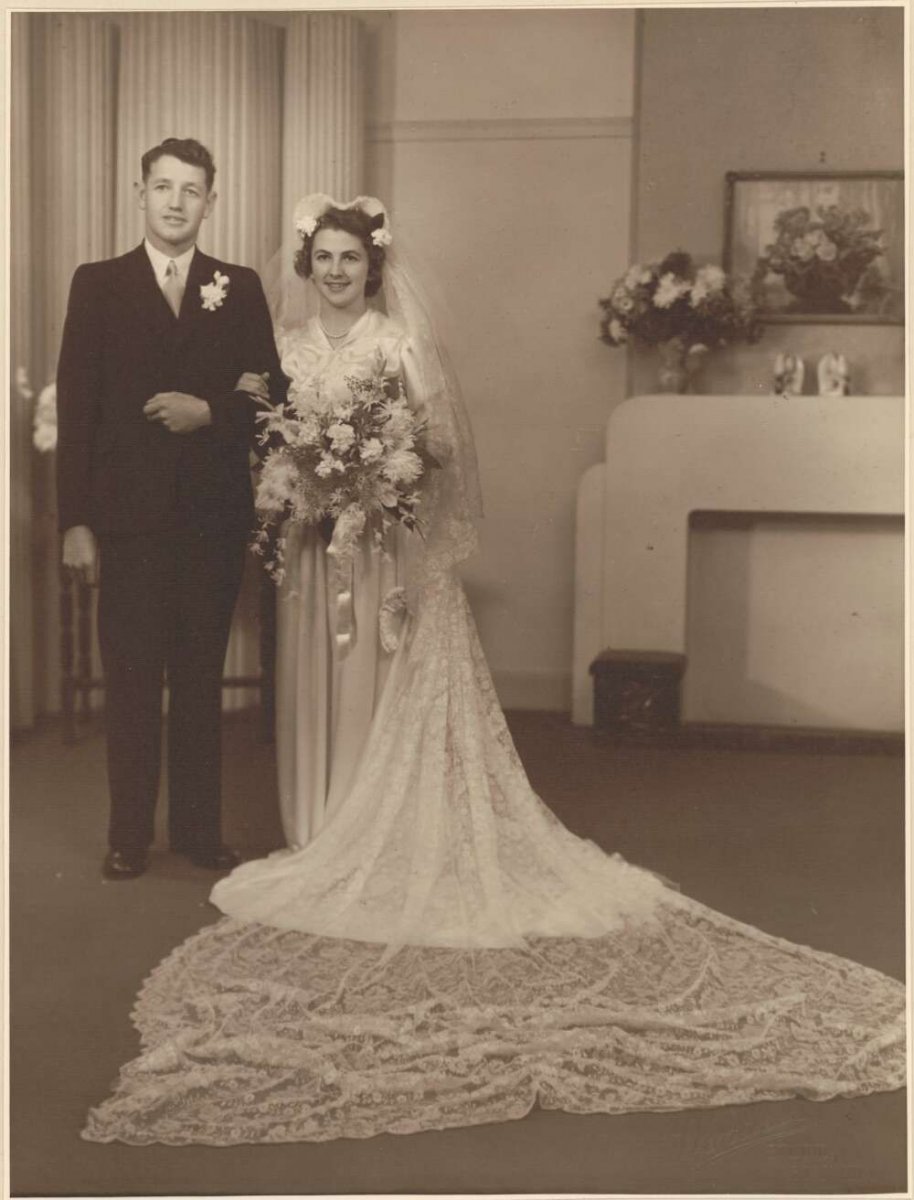 Researching your ancestor’s ‘love and marriage’ story can involve searching across a range of resources in the Library’s collection. Our research guides on Australian Births, Deaths and Marriages and Australian Indigenous Family History can be a great place to start if you are searching for marriage records. For more information contact our Ask a Librarian enquiry service.