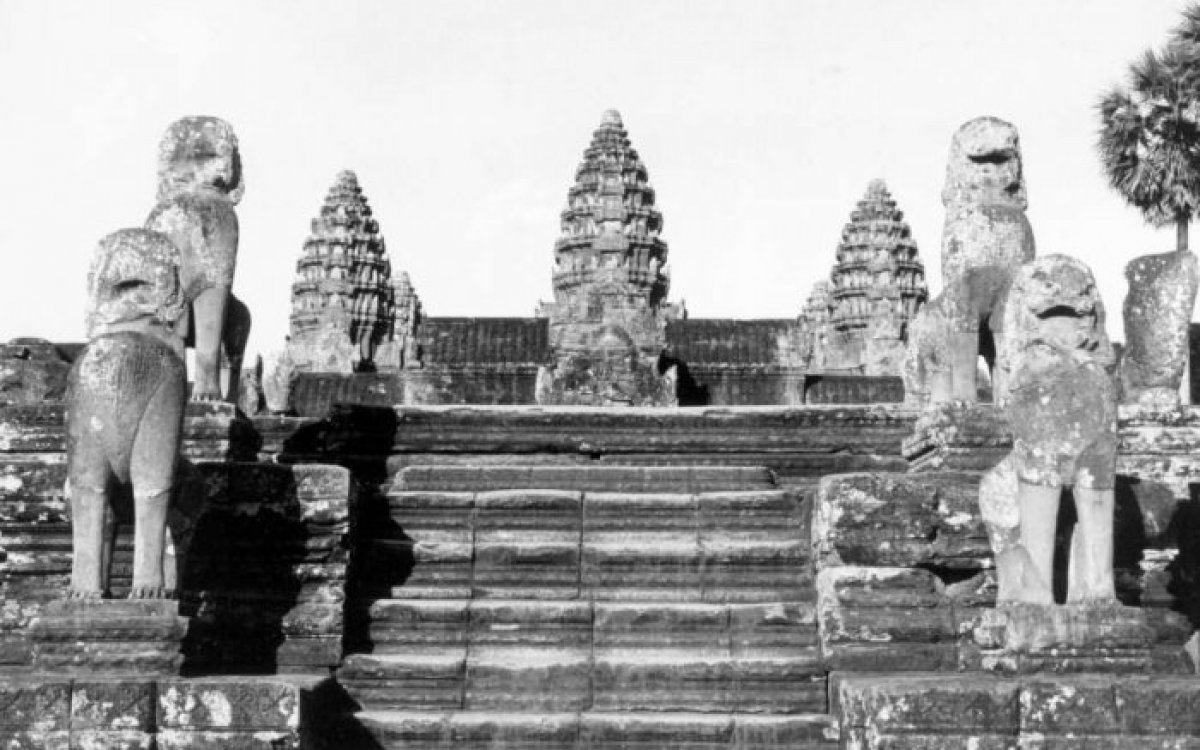 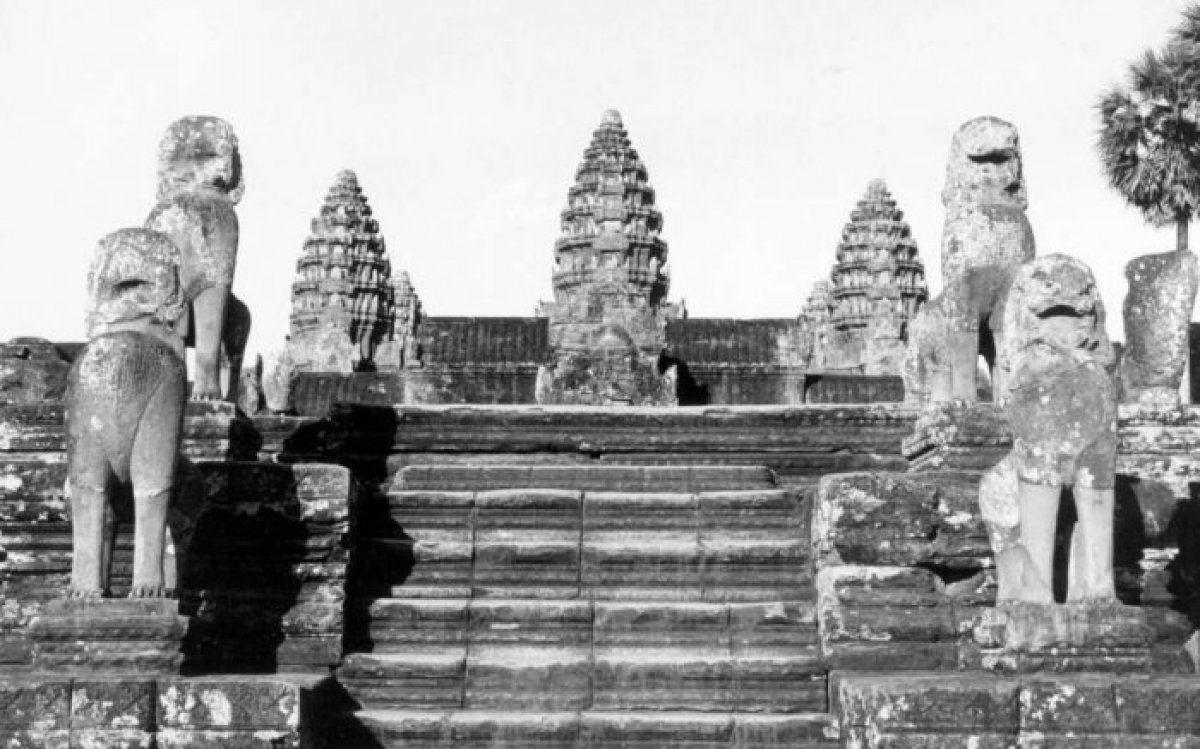 The Khmer kings were prolific builders. Like Indravarman I, many began building temples, shrines, and public buildings almost immediately after their ascent to the throne. Building temples that were dedicated to the gods or the ancestors of the king showed the king’s piety and perpetuated the cult of the king’s divine status. Building monuments was as much a political statement as it was a spiritual one. For the most part, buildings and houses in the Khmer Empire were constructed of wood with thatched roofs. Stone walls and tiled roofs were expensive and reserved for high-ranking officials and the royal court. By constructing magnificent temples from stone and including intricate decoration and ornaments, a king could proclaim his power and wealth to all who saw these buildings. The stone buildings also helped the king’s name live on after his death.

The climate in Angkor, as in much of South-East Asia, is warm and humid, with distinct wet and dry seasons. Wood used for construction is susceptible to rot and decay unless properly maintained and replaced. Today, only the stone structures built in the Angkorian period survive, with no remnants of wooden structures remaining. From these buildings, many sculptures and carved texts record the deeds of the king who built them, but there is little if any evidence of the daily lives of lower ranks of society. 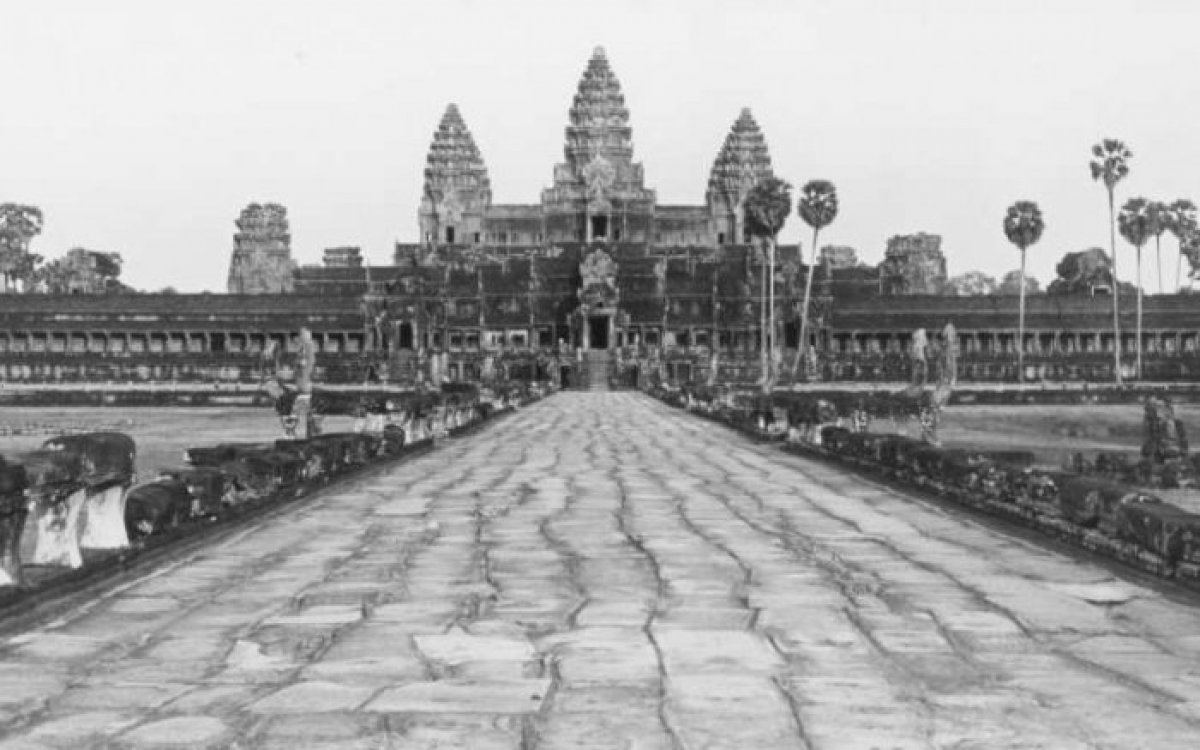 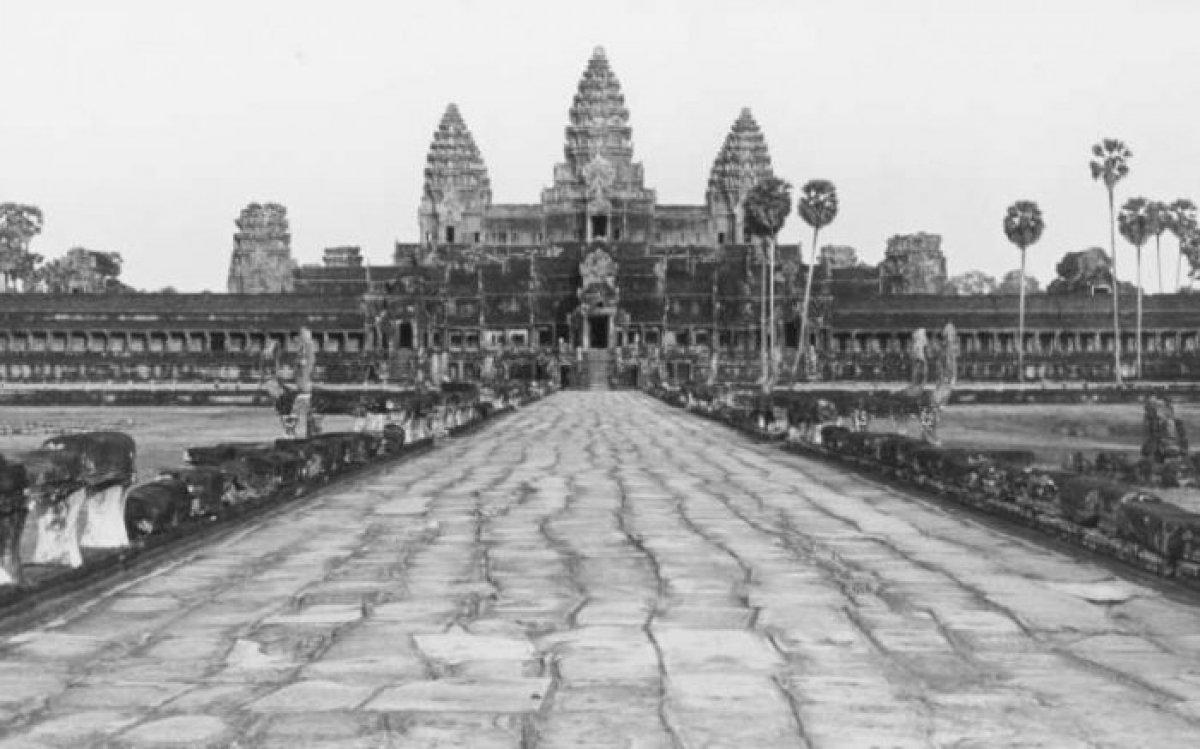 The most iconic image of the Khmer Empire and the city of Angkor is Angkor Wat (City-Temple). Construction of the temple and its surrounds was commissioned by Suryavarman II (1113–1150) in the early twelfth century. Originally dedicated as a state temple and personal mausoleum for Suryavarman, it became a Hindu temple dedicated to the god Vishnu, before becoming a Buddhist place of worship towards the end of the Angkor period.

The Angkor Wat temple complex is in the south-east of the city which was built by Yasovarman I. Like many large official structures in the empire, the temple building features striking symmetry: three main towers, each of which are pointed and intricately carved, with the middle tower being the largest. The temple buildings and galleries are enclosed by a series of walls. 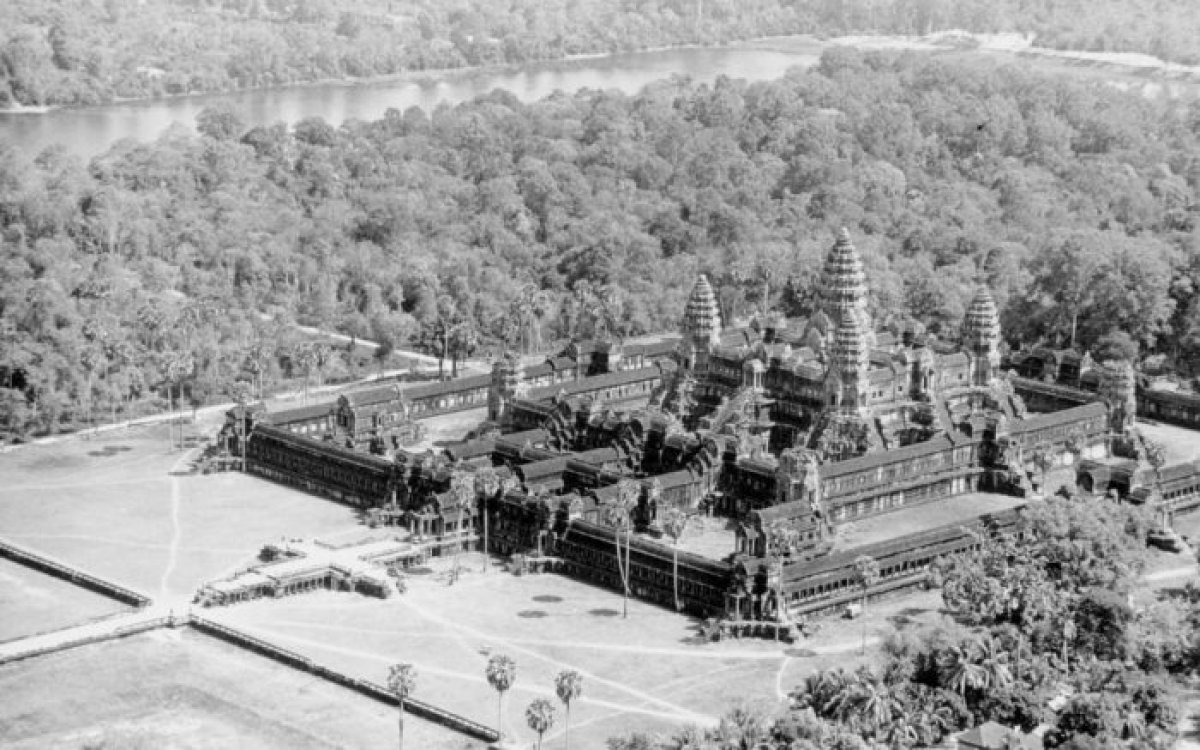 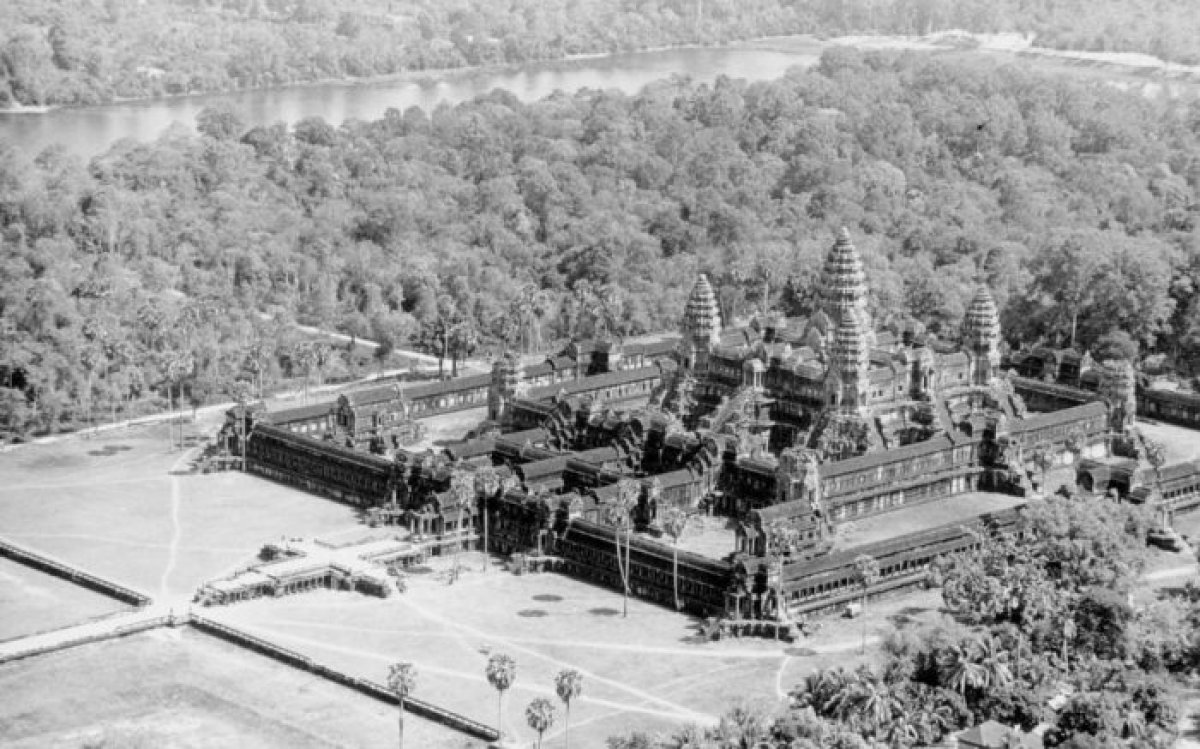 This style is called ‘temple-mountain’ architecture, with the elements of the building symbolising the peak of Mount Meru, which is believed to be the home of the gods.

This style is called ‘temple-mountain’ architecture, with the elements of the building symbolising the peak of Mount Meru, which is believed to be the home of the gods. 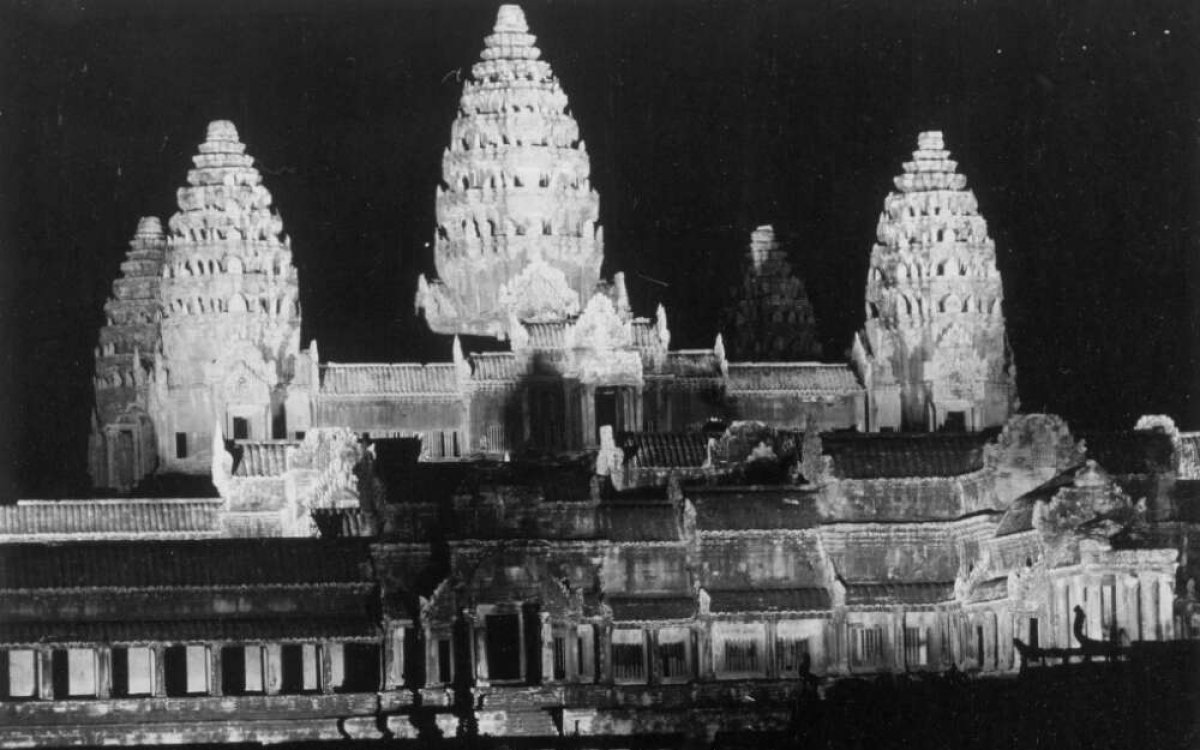 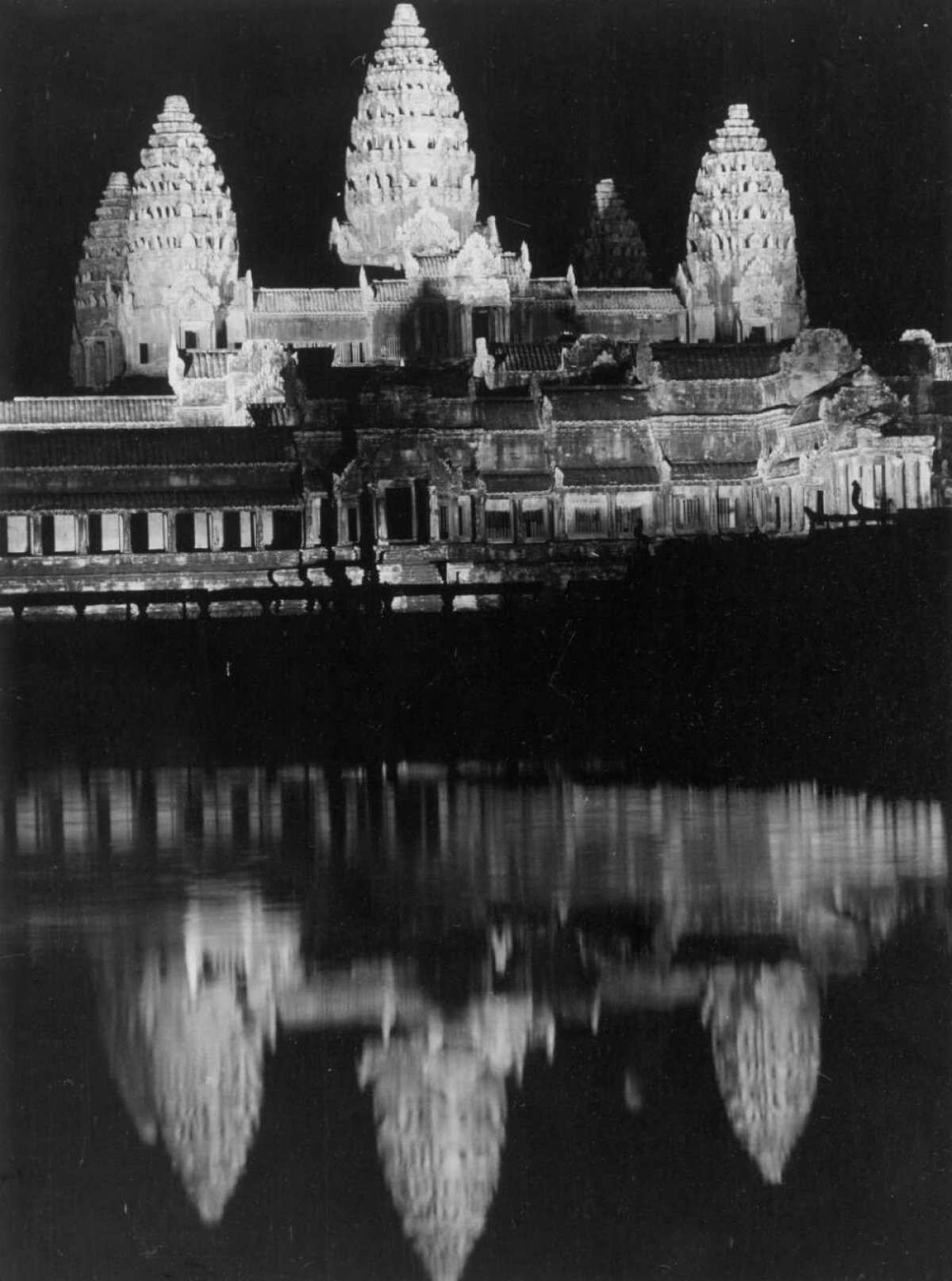 The outer wall has a perimeter of almost four kilometres. Today, the area between the inner and outer walls is a land of grass and trees, but during the height of Angkor, this area was part of the city with houses, markets, and palaces. Archaeologists and experts studying Cambodian history theorise that the temple city and its surrounds, including neighbouring Angkor Thom, would have rivalled the largest cities in the world at the time, with some estimating a population somewhere between 750,000 to a million people. 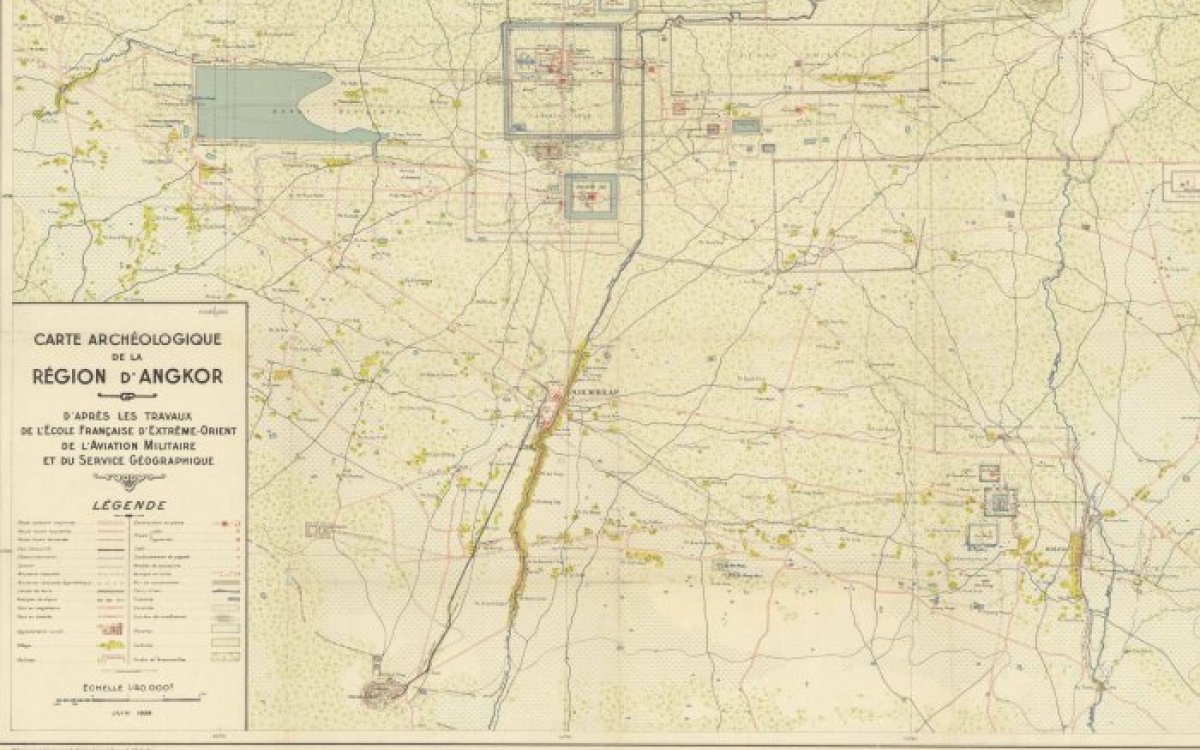 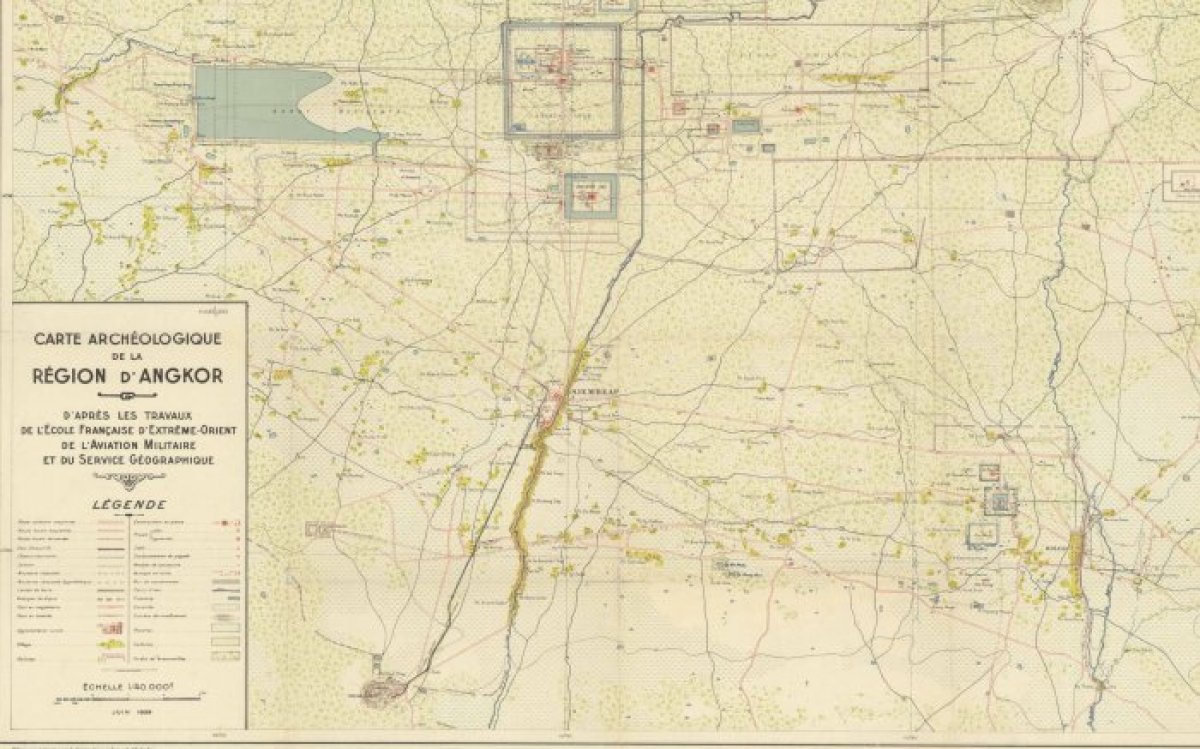 The entire complex is surrounded by a large square canal or moat measuring 1.7 kilometres from east to west and 1.5 kilometres from north to south; it is almost 200 metres wide. A wide sandstone causeway links the complex to the ‘mainland’. Angkor Wat has continued, in some form since it’s foundation, to be a religious, spiritual, and cultural centre not only for Cambodians but for Buddhism, making it one of the oldest of its kind. Angkor Wat features on the flag of the modern state of Cambodia and is, by royal decree, one of the official symbols of Cambodia.

The Khmer were not only great builders of monuments, they were also adept engineers and hydrologists. Throughout the major cities built by the Angkorian kings, large scale hydrological works are recurring features. Extensive systems of reservoirs, canals and sluices appear in major cities and settlements. Scholars are divided over how they were used.

In an inscription in the Preah Ko temple, King Indravarman I (877–889) promises his subjects that he will ‘begin to dig five days from today [the day of his coronation]’. Making good on his promise he turned the workforces available to him to digging and constructing the Indratataka, a large man-made lake measuring 3.8 kilometres by 800 metres. This reservoir or baray could hold up to 7.5 million cubic metres of water, approximately three Olympic-sized swimming pools. Today the reservoir is dry and is covered with fields.

The King ordered this reservoir built as a major public work for the benefit of the people in the then capital, Hariharalaya. In the monsoon season, the reservoir was able to collect excess water. During the dry season when rain was scarce, the water in the reservoirs would be used to water the rice fields through a system of channels and sluices. Subsequent Angkorian kings would outbuild Indravarman and construct bigger and more extensive lakes and systems. When Indravarman’s son, Yasovarman I, moved the capital to Yasodharapura (Angkor), he ordered the old and new cities to be linked by a waterway to make transit easier.

Each of the barays was constructed through massive earthmoving projects. The boundaries of each reservoir were comprised of strong earthen dykes constructed of soil and clay dug from trenches within the boundaries of the reservoir. The reservoirs were cut and built by the massive labour forces drawn from the civilian population of the empire, controlled by the kings of Angkor. The Khmer engineers even went to the lengths of diverting the flow of the rivers surrounding Angkor to feed the barays. The largest of the barays constructed during the Angkor period is the Western Baray. It dwarfs Indravarman’s Indratataka baray, measuring 8 kilometres by 2 kilometres (16 square kilometres) and holds an estimated 52,995,765 litres of water, a staggering 21 Olympic swimming pools worth. Today, it remains as one the largest hand-built bodies of water in the world. 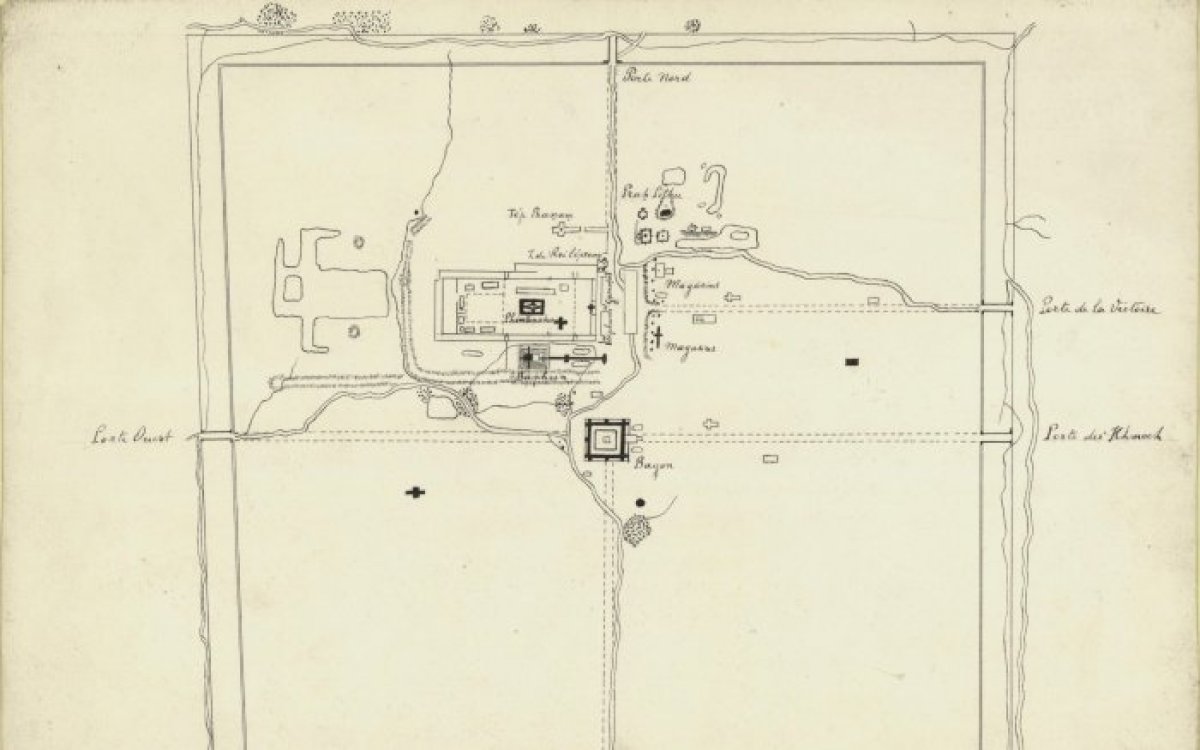 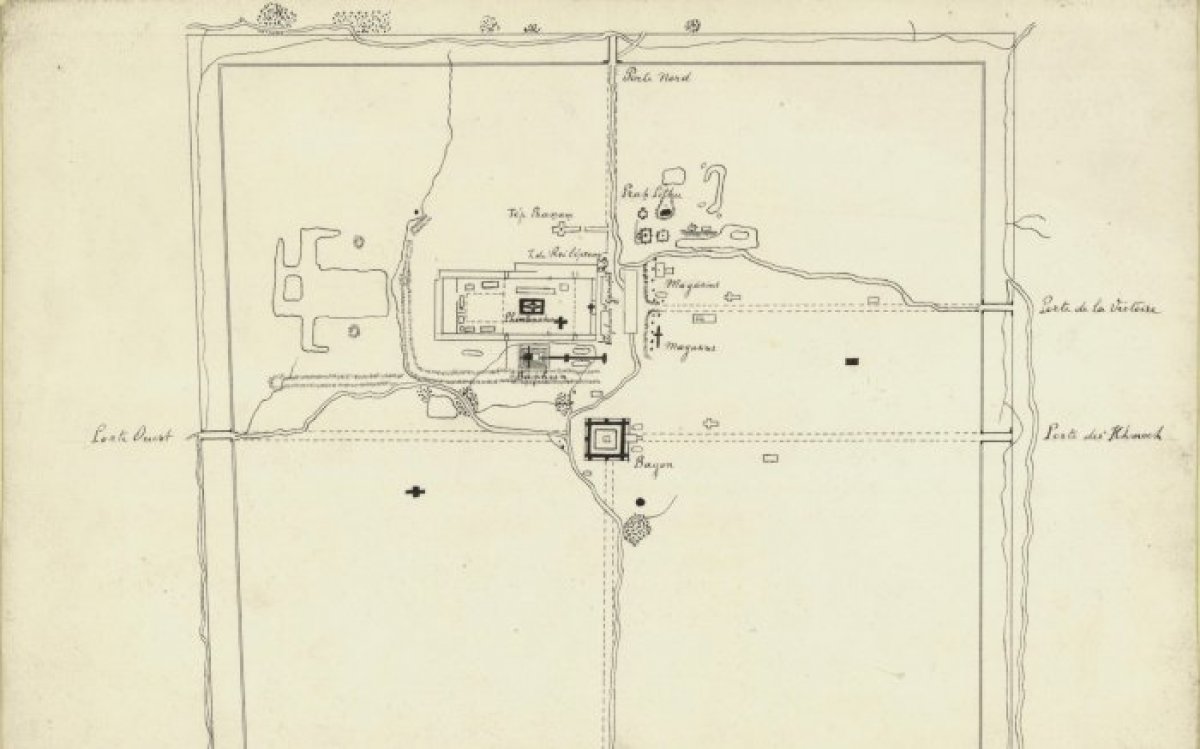 In almost the exact centre of the Western Baray (along with many other large reservoirs built during the Angkor period) is a small temple complex which, when the baray is full, becomes an island. The West Mebon temple was built in the second half of the eleventh century by Udayadityavarman II. The temple served as a place of worship and was dedicated to the Hindu god, Vishnu. Fragments of a colossal bronze statue of Vishnu were uncovered during excavations of the West Mebon temple in 1936. The statue is reclining.

Scholars have theorised the design of the temple when the statue was in place. It is assumed that the scene would have looked as though Vishnu was reclining on the water of the lake, which was said to represent the primordial ocean from which the gods created life. This symbolism has prompted much debate from academics over the initial functions of the barays: whether they were built for spiritual reasons or purely as practical infrastructure.

The building of monuments dedicated to the gods and ancestors, as well as managing the vast water resources of the kingdom was a major platform for many Khmer rulers. Many kings considered to be the most capable rulers excelled in this endeavour.

2. The canals and barays of Khmer cities were impressive feats of engineering. How would building, maintaining, and improving the canal and water systems of Angkor help a king to rule better? Imagine you have just ascended the throne of the Khmer Empire and you have learned that many canals are blocked, the reservoir is leaking, the sluice gates are broken and, within a month, there will be no water left in the Western Baray. What problems is this going to cause you and the empire?

4. Using an internet map service, have students explore/walk through the grounds of Angkor Wat (13.412006672983741, 103.86685594786836)) at ground level. Have them explore inside and out. Create a short creative writing piece imagining they are a visitor to the city and seeing Angkor Wat for the first time. Using appropriate historical terms, have them describe their thoughts and experiences in a creative writing piece.