Tried at the Old Bailey in January of 1828 and found guilty of stealing from a dwelling, 22-year-old Henry Sutton, shoemaker of Middlesex, was sentenced to death.

Fortunately for Henry (and especially so for his many descendants, including myself) a sympathetic or perhaps gullible jury believed his tale that a mysterious stranger named William Smith had plied him with Guinness and pressured him into committing the crime. Henry’s death sentence was commuted to transportation for life and in May of that same year he boarded the convict ship the Albion and began the long voyage to Australia.

Gazette notice showing name of convict, name of the ship which they arrived on and details of assignment. "List of all female convicts assigned and transferred from the 1st to the 31st of October 1832" New South Wales Government Gazette (Sydney, NSW: 1832 - 1900) 19 December 1832: 476.

The name of the ship a convict travelled to Australia on follows them about, usually making an appearance on later records. Tickets of leave, various pardons, and notices of abscondment published in government gazettes often show the ship’s name alongside the name of a convict.  Doubtless, this extra information helped the government keep a close watch on the movements of a convict. It also means that, for those of us who have a convict ancestor, uncovering the specific details of their arrival into Australia is easy - and with this information it’s sometimes possible to learn more about their voyage here.

The Log of Logs is an excellent resource for netting what records might be floating about out there for a particular ship’s voyage. Published in three volumes, these books contain information about ship logs, journals, diaries, letters and other voyage narratives from ships into Australia, New Zealand, and surrounding waters from 1788-1993. It is essentially an index - the Log of Logs points me to where I can find and access sources of information about a ship's voyage to Australia. 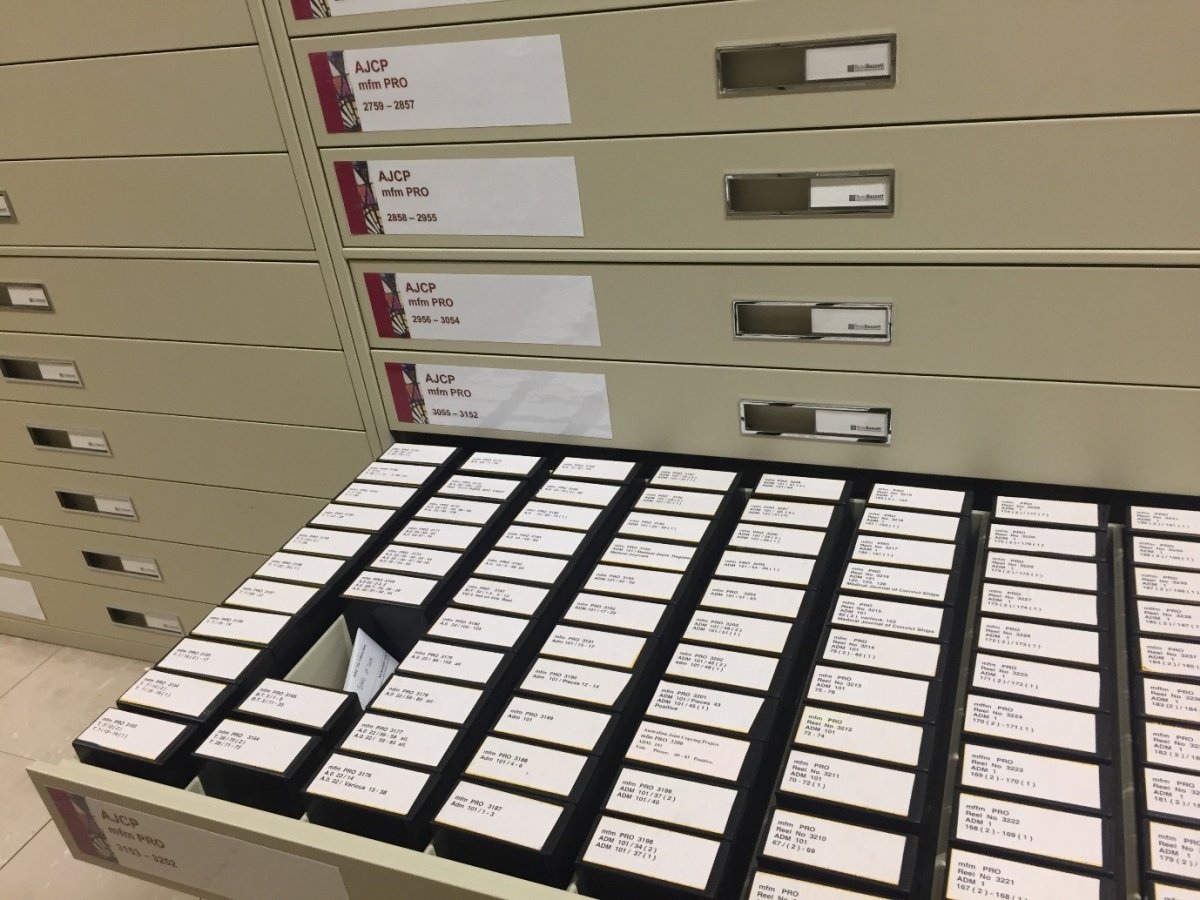 The Australian Joint Copying Project (AJCP) is a collection of over 10,000 reels, the majority of which are records relating to the colonial administration of Australia held by the National Archives of the U.K - including medical journals of convict ships. You can read more about the AJCP collection on our research guide,

Not expecting there to be any records for Henry’s 1828 journey aboard the Albion, I was surprised to find a Log of Logs entry indicating that a surgeon’s journal had survived, and is available on microfilm at the National Library of Australia. The Albion is also one of a very limited number of surgeons' journals that has been digitised by the National Archives of the United Kingdom.

Surgeons' journals for convict ships that ferried convicts to Australia are also available online via Ancestry.com. Many public libraries throughout Australia provide free access to the Library edition of Ancestry.com. (N.B.) For unknown reasons, the digitised journal of the Albion available via Ancestry.com is missing a number of pages (coverage only runs to August 1828). The journal on microfilm, which the below images were extracted from, continues through to mid-November 1828.

Most surgeon's journals record details of patients who required medical attention using the above pro forma, although not every surgeon strictly adhered to it.

Surgeons provide a fascinating and unique account of a ship’s journey. Names of patients appear alongside a description of an illness (lumbago, vertigo, etc.) and notes on improving or worsening health, which might include that the patient had “purged powerfully” or was feeling “much better”. Various treatments also appear in the journal, occasionally in Latin depending on the surgeon, such as the application of hot vinegar to remedy a hernia lump. If a passenger died during the journey to Australia, there might even be a report of an autopsy. 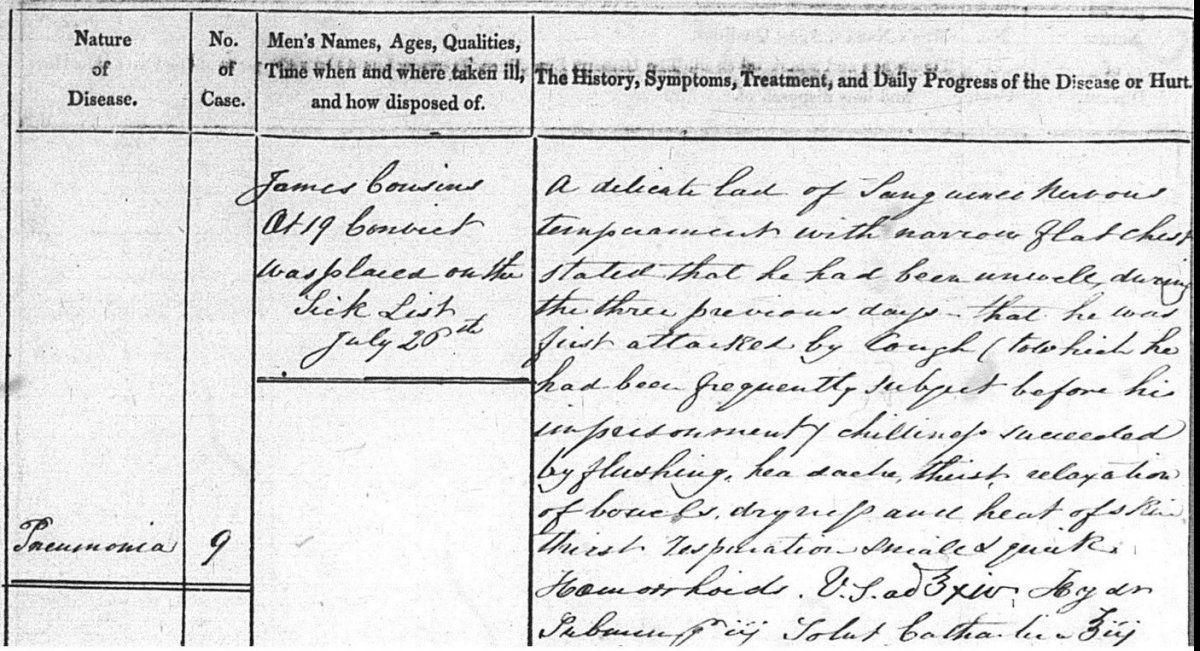 James Cousins’ bout of pneumonia when he was aboard the Agincourt in 1844 is recorded in substantial detail across multiple pages of the surgeon’s journal. He was eventually cured and discharged from the ship’s hospital.

Scant detail is written for the majority of illnesses and injuries aboard the Albion; the surgeon Thomas Logan remarked daily that the majority of cases were “void of interest”. While I certainly would have liked names, and details about the slightest cough or bruise, family historians must often find some measure of contentment with the small kernels of information the historical record provides.

"...dark, damp, dreary! The gale is furious & all the prisoners are necessarily below." Entry in the Surgeon's journal of the Albion 3rd October 1828.

Notes in a surgeon’s journal weren’t strictly limited to cases of sickness, they also contain reports on the conditions aboard the ship that might impact the overall health of the prisoners and crew.

Thomas Logan, surgeon, wrote that the daily routine on the Albion was to move convicts above decks, and keep them there during the day, so that the below decks (where convicts were kept at night) could be washed, scrubbed and ventilated. Despite the daily clean the surgeon noted that each morning the below decks were once more reduced to a “shocking state”. Bad weather meant that prisoners were kept below deck during the day, further increasing the likelihood of sickness on board.

In addition to convicts, Officers and members of the crew were also subject to the ministrations of the surgeon aboard a convict ship. It is important to note that surgeon’s journals can vary in terms of level of detail (and legibility)

Also recorded in the surgeon’s journal of the Albion, rather out of place, is the excitement of the prisoners as the ship nears Australia:

“The sight of Australia gives them the liveliest satisfaction. They evince an animated eagerness to behold their future country. Everyone’s looks betray a lively interest. Fun and frolic arise out of the common hilarity. A game is played in which all concur. This an initiation of running the Gauntlet. He who has passed this ordeal has acquired the “Freedom of Australia” “

The sight of their new home seems at first to have been a panacea for convicts aboard the Albion, the surgeon finishes his entry with:

“They seem to have left off getting sick, or are become indifferent about being cured!”

An entry perhaps written pre-emptively by a surgeon caught up in the moment, the following day a convict named William Crew died of typhus. 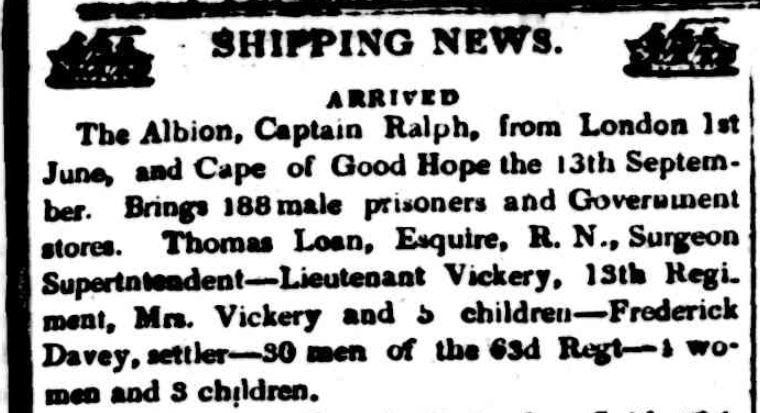 Historical newspapers, such as those available through Trove, can be a rich source of information about convict ships. Newspapers often feature notices of ship clearances and arrivals, and sometimes whether there were any issues on the voyage. Sometimes these notices provide the number and names of passengers. N.B. Note the misspelling of the surgeon Thomas Logan's surname.

On the 14th of November of 1828, surgeon Thomas Logan wrote his final journal entry for this voyage of the Albion, reporting that 188 convicts “…landed in good health”, and that, much to his satisfaction, “…no cause of complaint was alleged by any one against me.”

In the final tally there were 314 cases which required medical attention and four deaths during the roughly five month voyage of the Albion. The vast majority of cases were of catarrhal (51 cases recorded), followed by contusions (25 cases recorded). Diagnoses of diarrhoea ranked a close third, with 23 unfortunate sufferers - all supposedly cured to the relief of everyone on the ship.

And even though my Henry failed to get a mention in the pages of the surgeon’s journal, I’ve come to realise that this is probably all for the best; and I haven't walked away empty handed. Good family history is more than collections of dates of births, deaths and marriages - it’s as much about context - putting flesh on the bones of our ancestors by uncovering what lives they lived in a particular time and place. In my mind’s eye, I can see Henry, slightly younger than I am now, in the dark below decks on the Albion, feeling very sorry for himself while a furious gale whipped the sea into a frenzy. I see him on a sunny day, afloat upon a mighty ocean far from London, marvelling at a distant shore, triumphant as he runs the Gauntlet.

Do you have a convict ancestor? Have you ever wondered what their journey to Australia might have been like? It's not quite true that dead men tell no tales - there are plenty of primary sources of information floating about out there that are just waiting to be reeled in...hook, line, and sinker. So weigh anchor, hoist the missen and avast ye of our research guide on convicts.

Or, if you're completely becalmed and need a bit of wind in your sails, or perhaps a bit adrift with your family history research, why not Ask a Librarian.