Did you know that of an estimated 250 Aboriginal and Torres Strait Islander languages, only 120 are still spoken? Not only that, approximately 90 percent of these languages are endangered.

The United Nations Assembly has declared 2019 the International Year of Indigenous Languages. To promote and celebrate this important part of Indigenous culture and heritage in NAIDOC week, I was asked to select books from the National Library of Australia’s collection and create a display for our Reading Rooms. 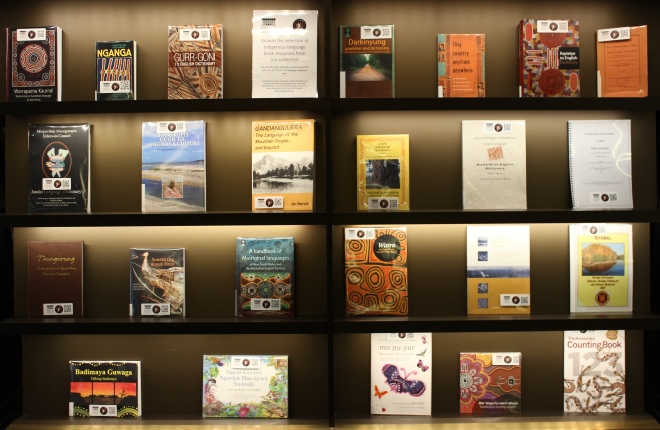 For this display, I wanted to provide a sample of the bi-lingual dictionaries, grammatical tools, handbooks and guides held in the collection. The National Library of Australia also holds a number of storybooks, young readers, accounts of naming areas, anthologies and guides used to assist with reclaiming and revitalising language. These all are important resources which can be used to educate and promote Indigenous languages Australia wide.

I wanted to ensure that the display represented a broad range of languages. To select the books, I began searching the Library catalogue using phrases such as “Indigenous languages” and “dictionaries” as subject headings. Once I found an interesting title, I looked for a language reference code in the catalogue record (see image below). These codes can be used to search the AUSTLANG database on AIATSIS’s website for material and information about specific languages. Equipped with these tools, I selected a list of titles for display. 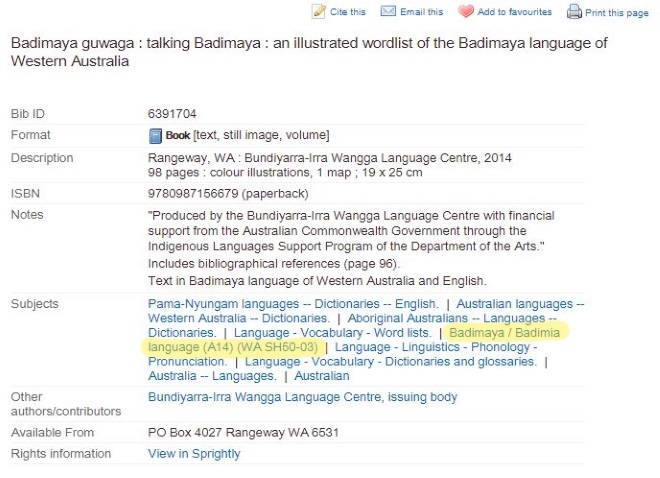 AUSTLANG language codes can be found in the Library's catalogue records (highlighted in yellow).

Here are some of the highlights of the display:

Rob Amery chronicles the early stages of the language revival of the Kaurna people. The focus of Amery’s revival of language started in 1990-1997 with the writing of six songs. The language has since developed and spread across institutions, has been spoken in public and has been used by linguists, educators and in Kaurna homes.

This dictionary records and brings to life Thanakupi’s language through works of art, cultural guides and photographs. Included are descriptions of family customs and ceremonies, plants, animals, food preparation, sea and shore life.

Gurri-goni to English dictionary by Rebecca Green and Leila Nimadja.

Rebecca Green and Leila Nimadja compiled this dictionary after the Gurri-Goni people asked for a guide to help with spelling words for plant names, and to help pass on stories to their children. It contains chapters on the Gurri-Goni alphabet, and how to find Gurri-Goni words for an English meaning. 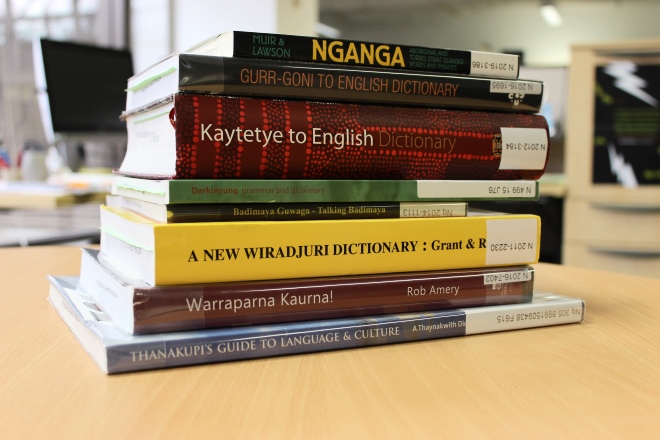 Some of the Indigenous language books selected for the display in the Main Reading Room.

The title translates to ‘A year in my country’ and is the illustrated story about the life of Kune people. This bilingual story looks at the seasonal changes and cycles of this rich hunting country.

Something about Emu’s: Bininj stories from Western Arnhem Land edited by Murray Garde.

This collection of bilingual essays by senior members of the Bininj Kunwok language group, looks the special place of emus in an ecological, cultural and ritual context.

A handbook of Aboriginal languages of New South Wales and the Australian Captial Territory by Jim Wafer and Amanda Lissarrague.

This handbook puts linguistic information within reach of a broad audience. The first part of the handbook includes maps, dialects, locations and resources available for language revitalisation, and the second part comprises word lists for 42 languages and placenames.

This bilingual dictionary was designed to enable language revival to the Taungurung people. It is based on the compiler’s extensive research of 19th century Taungurung language, with a focus on phonetic information.

This bilingual dictionary was part of the Wiradjuri Language Development Project with work undertaken by the Wiradjuri Council of Elders, and Pastor Cec Grant.

This country anytime anywhere : an anthology of new Indigenous writing from the Northern Territory by Karl Jabanbi Dank et al.

A contemporary collection that features works by emerging writers as well as many winners of Northern Territory literary awards. 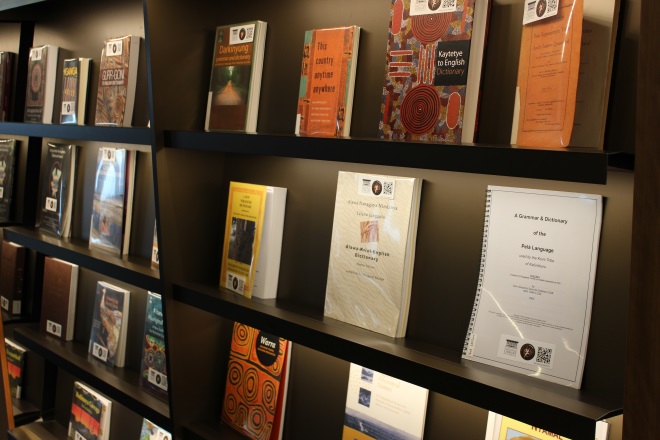 A beautifully illustrated book about a family visit to Angenty, a special water hole in Central Australia. Ceremonial dances, songs and stories are taught by elders to children on the visit. There’s word lists, song texts and a list of recordings.

This guide has been written to help families and communities with the work of maintaining and strengthening Australia’s traditional languages.

This bilingual counting book features artworks by acclaimed artist Gabriel Maralngurra. The ecology of West Arnhem Land and the holistic nature of Kunwinjku Aboriginal culture is highlighted in this work.

Ngambri ancestral names : for geographical places and features in the Australian Capital Territory and surrounds by Ann Jackson-Nakano.

This publication documents the Jackson-Nakano’s research into the original place names of the with backup evidence.

All of the books on display had QR (Quick Reference) codes attached to the cover. These QR codes linked to AUSTLANG, so when the codes were scanned the reader could find out more information about where the language originated. AUSTLANG also provides notes, as well as alternative/variant names and spellings.

If you missed seeing our display during NAIDOC week, you can request to access the listed materials with a Library card. You can apply for a patron card online and request collection items to use in our reading rooms. We have an Australian Indigenous Language research guide full of helpful tips for finding Indigenous language materials, and we have a number of eResources available about Indigenous Australia if you are unable to visit the Library.

Another useful resource is the Papunya Literature Production Centre, which has published around 500 bilingual material items relating to teaching children in the Papunya region in their first language (see the Austlit entry for a list of titles).

You can also visit the TroveNLA youtube channel for tips on how to search for Indigenous languages in Trove, with video tutorials such as Searching language groups in Trove, and story-time videos such as Paul Hingston reads "I Got This Hat" with his daughters.

Although our NAIDOC week display has come and gone, you can still delve into the rich and diverse Indigenous language resources on offer at the National Library of Australia.