When I moved to Canberra from Perth in 2014, I lost my public holiday long weekend for my birthday on March 1st. I did discover Canberra has a March public holiday - just two weeks later for something called 'Canberra Day'.

What’s this all about? Being The Plodding Historian (and always on the look-out for distractions from the thesis), I delved into the NLA collection to find out why we celebrate Canberra Day. 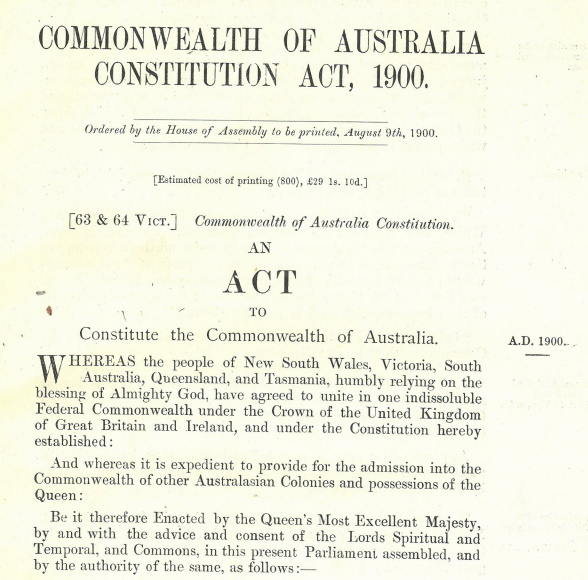 The new Commonwealth needed a new capital city; so began the debate between Sydney and Melbourne about who was best. To settle the argument, section 125 of the Constitution proclaimed that “the seat of Government of the Commonwealth… shall be in the State of New South Wales, and be distant not less than one hundred miles from Sydney”. So in 1902, a group of Federal senators, along with a team of surveyors who actually knew what to do, went on a little tour in New South Wales to ‘inspect’, ‘peep’ and ‘spy’ the towns proposed for our new Federal Capital Territory.

E.T. Luke’s photographs of the 1902 Senator’s tour of the Federal Capital sites: ‘Inspecting’ Tumut, ‘peeping’ at Lake George and ‘spying’ on Orange.

In 1908, the Federal Parliament passed the Seat of Government Act, confirming the area of Yass-Canberra as the site for Australia’s new Federal Capital Territory.

An international design competition was launched in 1911 to find the best design for our new Federal Capital. The winner was announced on 24 May 1912 as Walter Burley Griffin of Chicago. The new Commonwealth had a site for its capital and a designer to make it all look “beautiful… embracing distinctive features which will lend themselves to the evolution of a design worthy of the object… for all time”. Now it needed a name. 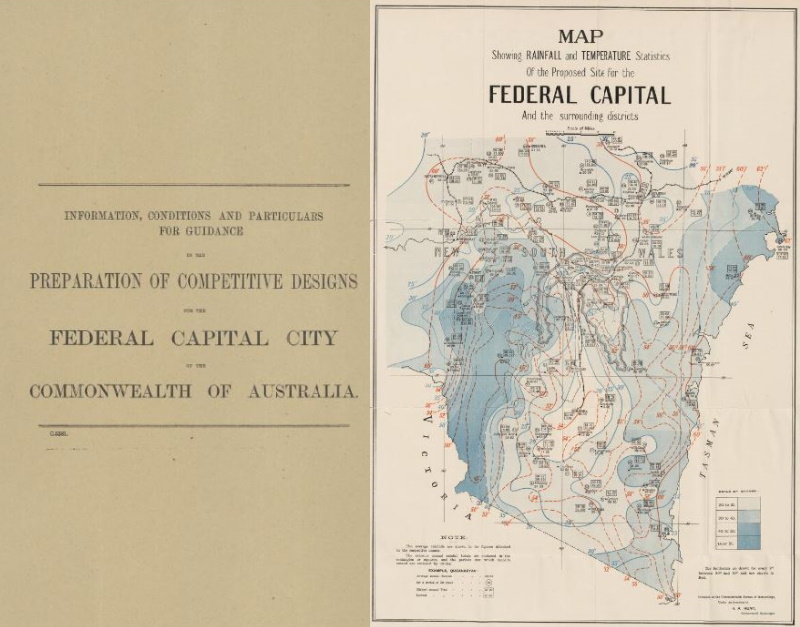 The area we now know as Canberra, which means ‘meeting place’ in the local Indigenous languages, has evolved from what the Indigenous peoples called Kamberri for more than 25,000 years. Many suggestions were put forward for the naming of the new Federal Capital City, but before we get to that, I want to introduce you to the most excellent, Lady Gertrude Mary Denman.

Lady Denman arrived in Australia with our new Governor-General in July 1911. Back in England, she was a renowned supporter of the suffragette movement and campaigned actively for the rights of women and children; indeed, The Daily Telegraph proclaimed her “The Children’s Champion”.

However, when she arrived in Australia, it was Lady Denman’s skills as a hostess and her sporting prowess that we were most interested in. An article in the Sydney Mail on 2 August 1911 stated that: “It seems to be a foregone conclusion that Lady Denman will be very popular during her reign in Australia as the wife of the Governor-General.” The reporter goes on to write:

“Lady Denman is very well known in London society, for even before her marriage she assisted her mother to entertain. [But most importantly…] [she] is enthusiastic regarding all forms of sport, and this should strongly appeal to the people of the Commonwealth.” 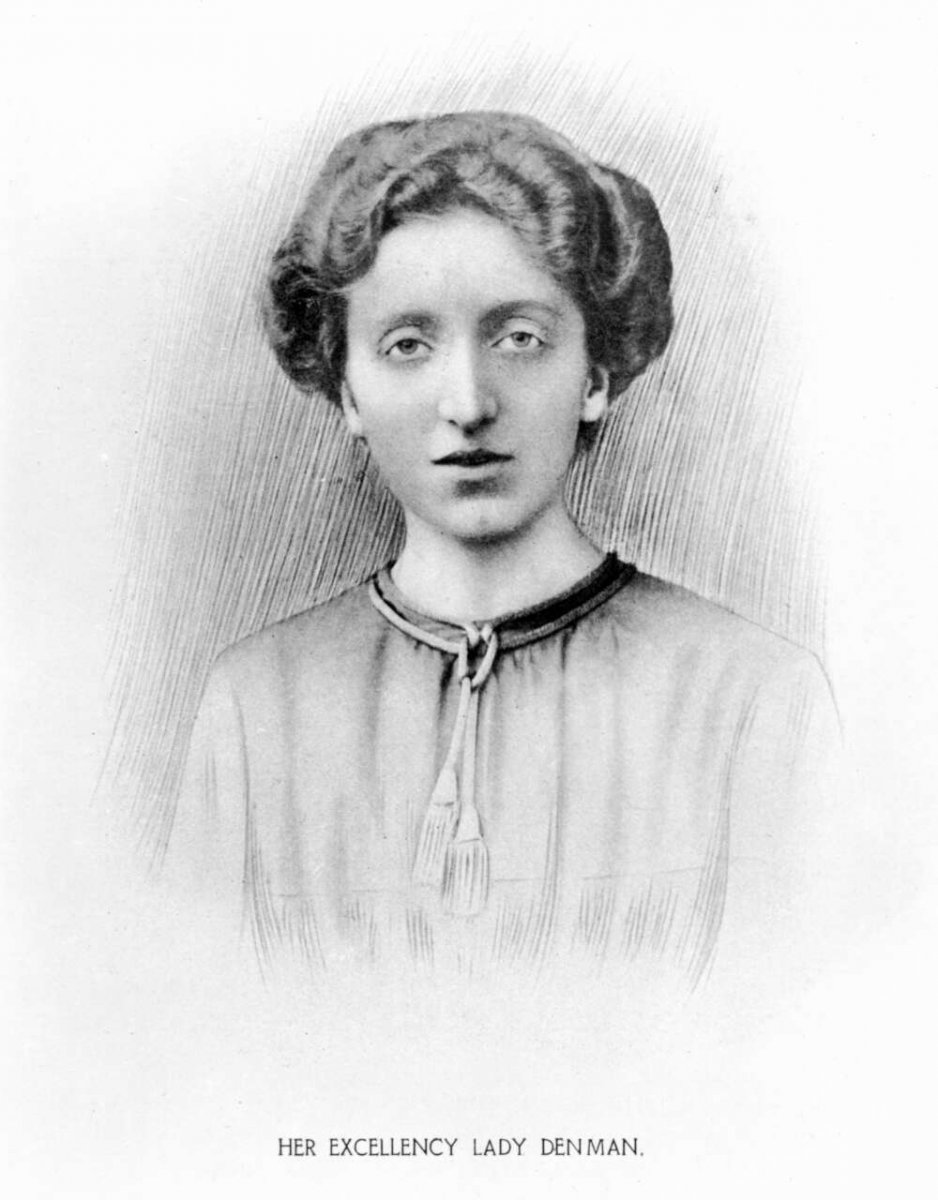 I found an absolutely delightful quote from Punch magazine in Lady Denman’s biography on The Australian Women’s Register (the AWR can be found via the NLA catalogue and Trove.) On a warm day in Melbourne, Lady Denman took to the tennis court with her mixed doubles partner, Mr Vernon and “gained a whole army of friends” with her enthusiastic participation. The warmth of the day was matched by the “warmer feeling of regard for a Vice-regal lady who, hot and perspiring, is seen to be skipping and bounding about a tennis court than for a stately person who merely bows to folk out of a State carriage”.

It was also hoped that Lady Denman would continue the philanthropy she exhibited at home while in Australia, which indeed she did. Her predecessor, Lady Dudley, established a Bush Nursing Scheme in Victoria, which she continued. Lady Denman was patron of, amongst many others, the Melbourne Women’s Hospital, the Girls’ Training Home in Berry Street and Melbourne’s Repertory Theatre, for whom she organised an exhibition of privately-owned antiques to raise funds for their own theatre (the exhibition catalogue is in the NLA collection). She even established a shelter for Melbourne’s lost dogs. 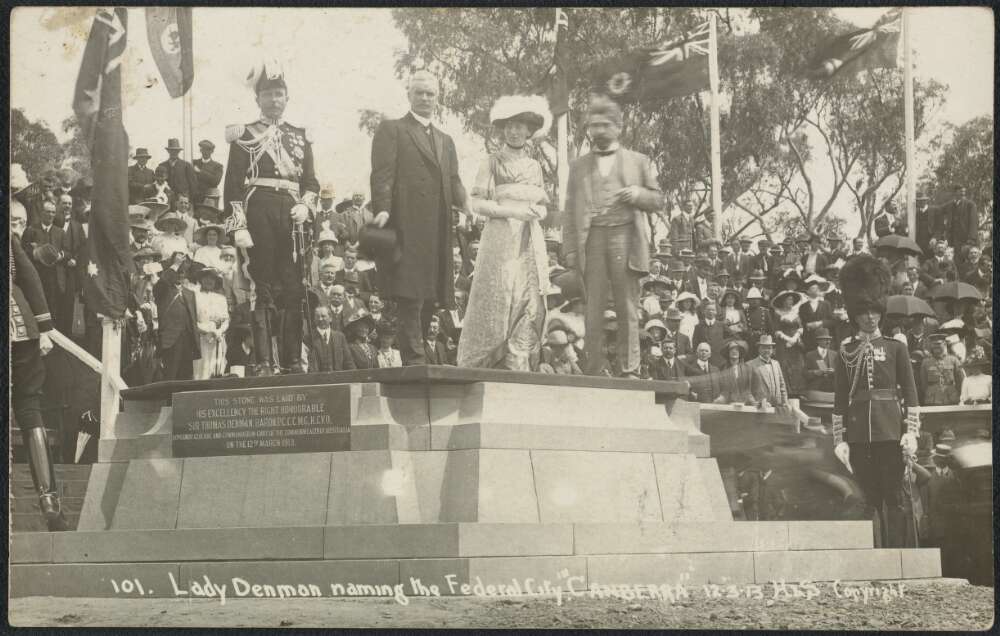 So when it came time to announce the name for the new Federal Capital City of the Commonwealth of Australia, there was no better person to do the honours than our favourite vice-regal lady!

Off to Kurrajong Hill (now Capital Hill) they went and on Wednesday 12 March 1913, Lady Gertrude Mary Denman stood upon the newly constructed base for the never-realised Foundation column and announced to those assembled:

“I name the capital of Australia, Canberra.”

Canberrans now celebrate Canberra Day on the second Monday of March each year, so while I do miss my birthday long weekend, I get to live in our great Federal Capital and I've met The Denmans. Can't complain about that! Happy Canberra Day!