FRM F1858 (Petherick Copy) - Lancelot Edward Threlkeld.
An Australian grammar : comprehending the principles and natural rules of the language, as spoken by the Aborigines in the vicinity of Hunter's River, Lake Macquarie & New South Wales.
Two and-a-half pages word list containing Aboriginal place-names and their meanings, natural features of the landscape (plants, types of trees), animals and parts of the human body. Lists nouns and pronouns. Language stated in text as being from the Manning River district of New South Wales. Note on page states "collected and forwarded by Mr John Thomson from information supplied by Aboriginal Tommy Bulmer."

MS 9197 - Papers of Byram Mansell, 1910-1986
Short stories
Story titled ""the Warratah", in unpublished book titled “Stories of the Dream Time Aboriginal Legends and Folklore".  It is unclear as to whether the stories, and associated language, are legitimate recordings of language or were created as part of a narrative.

MS 3973 - Memoirs, [19--] of Mary Prior
Memoirs, [19--]
Four single sided pages of notes on the Aboriginal people of the Richmond River. Limited language material, text contains only two words: "Pichnieban" (Water vessel), "Cooradgi" (Native Doctor). One reference to the location of a Bora Ring.

MS 7080 - Papers of Lorimer Fison, 1869-1907
Box 3, Folder 3, items 131 & 160
Contains notes on kinship for language group described as the “Kamilaroi tribes of the Liverpool Plains, and the Namoi and other tributaries of the Darling”.

MS 7080 - Papers of Lorimer Fison, 1869-1907
Box 3, Folder 3, item 140
Three pages of notes on kinship of Aboriginal peoples “...inhabiting the country at the junction of the River Darling and the River Murray and a considerable distance up the Darling”.

MS 9197 - Papers of Byram Mansell, 1910-1986
Short stories
Story titled ""the Waterfall", in unpublished book titled “Stories of the Dream Time Aboriginal Legends and Folklore".  It is unclear as to whether the Dreamtime stories, and associated language, are legitimate recordings or were created as part of a narrative. 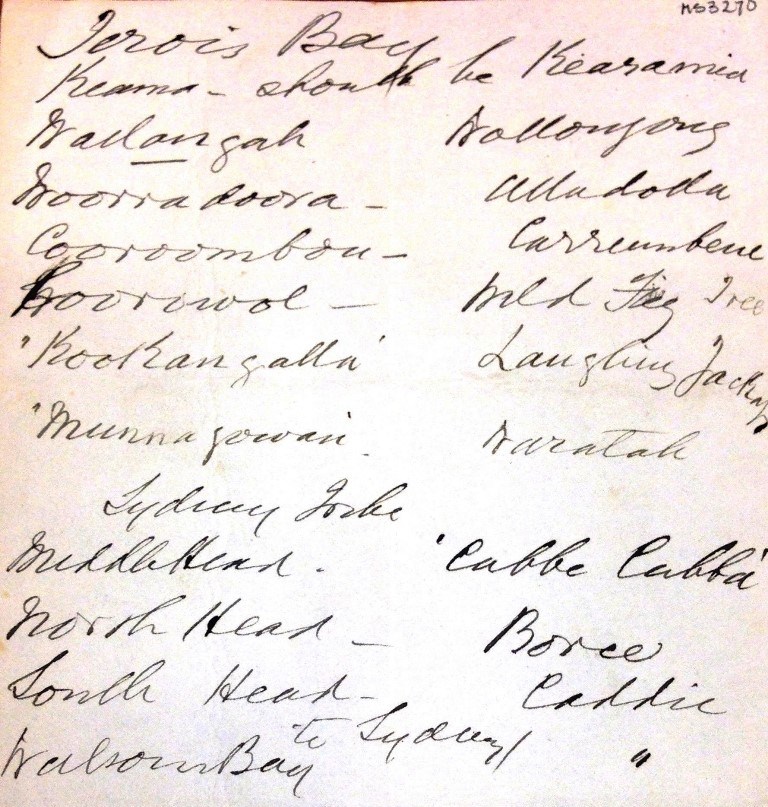 Many of the Library's recordings of Aboriginal & Torres Strait Islander languages were collected by missionaries and ethnographers.

Check out our Video:

Can I get copies of items from the Library?