The Newspapers and Family History team answer thousands of enquiries each year, sent to us from all over the world. Many of the questions asked are ones we can answer using our unparalleled Australian collections and services.

Some of our answers might be a referral to other organisations such as another library, or perhaps an archive/public records office.

… And then there are those questions we sometimes can’t really answer at all, tricky things that leave us stumped for one reason or another.

Questions such as these ….

Exact time of birth is an important fact for devotees of astrology.

A question that we’re asked quite a bit, and which we’d dearly love to be able to answer, is “What time was I born?”

Unfortunately, one thing that typically isn’t noted on a birth certificate in Australia is time of birth (some countries, such as France, do note this information).

Some hospitals began issuing parents of newborn bubs with cards containing information not found on the civil register - according to an article published in the Newcastle Sun, the Lithgow hospital began doing this as early as the 1920’s. 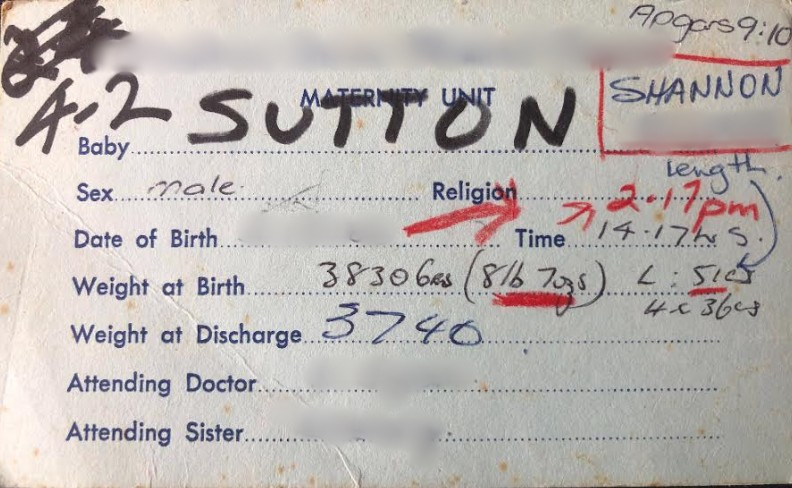 Example of a card issued by a hospital to the world’s cutest baby (according to my mother). Note the details (weight, time of birth, attending Doctor & Sister) that won’t be found on the civil register.

You might have one of these cards in your own family treasure box , perhaps nestled next to a lock of hair from a first ever haircut, or a poor first attempt at art.

Generally, if you were born in Australia, often “what time was I born?” is a question we can’t answer. The information may simply be lost to the mists of time with so much other family history.

"I’m looking for a newspaper article published in 1964 about my uncle/cousin/grandparent/pet fish."

People often write to us in the hope that we might be able to track down a newspaper article, or uncover details about when a clipping from a paper they have was published. 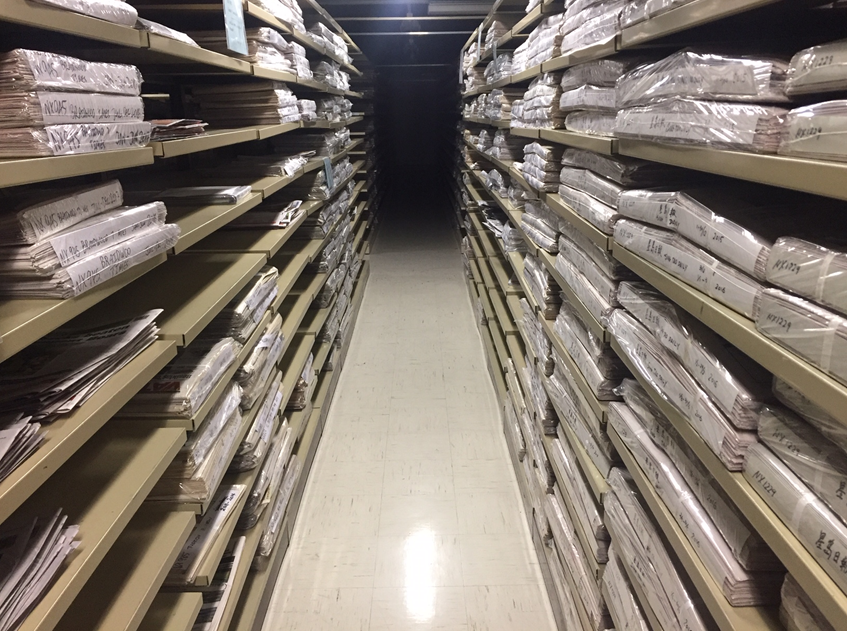 The National Library of Australia has the most comprehensive collection of Australian newspapers in the entire world. Sometimes we are able to help find an article if at least some details about it are known, such as roughly when it was published (to within a month or so), and from which newspaper it likely came.

But often details of the when and where aren’t known, or have been entirely forgotten. In these cases a search through our rather large collection becomes an impossible task.

This clipping, belonging to a colleague, was extracted from the Young Chronicle and contains quite a lot of information about the life of Harvey Macgregor, a veteran of the Boer War and World War 1. Unfortunately, no citation details were written on the clipping, so it’s unclear exactly when it was published. 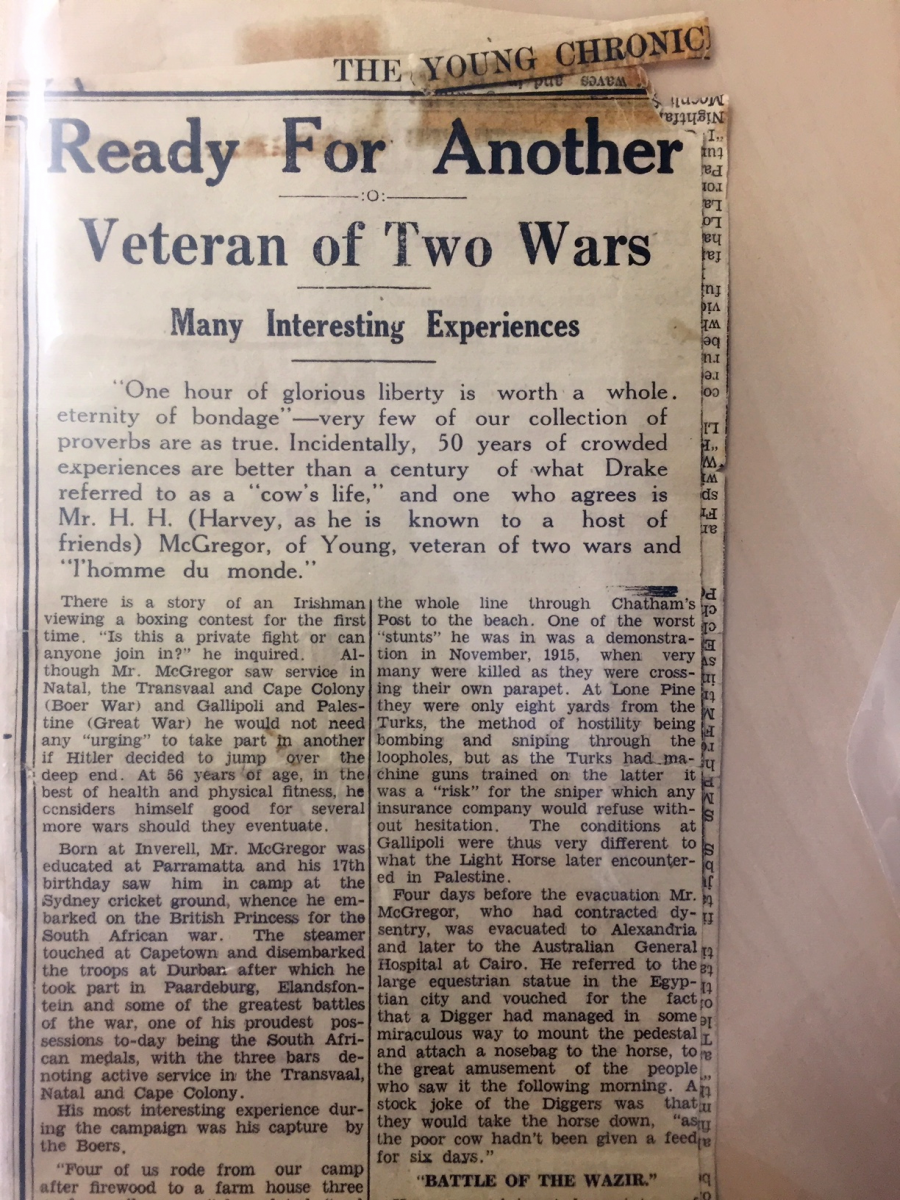 Clipping from an article in the Young Chronicle, with no citations.

From Mr McGregor’s age given in the article, and other details found in advertisements, it’s likely it was published sometime around August 1941. In this instance, we can’t confirm an exact date of publication because we don’t hold any issues of this newspaper for that year, neither does the State Library of New South Wales, nor does the Young Library.

There’s nothing more frustrating than not knowing exactly the provenance of a very vital piece of information about an ancestor. Always ensure you cite your sources. Even though referencing might be tedious, short-term pain is long-term gain.

"Can you tell me how to get my hands on a letter?"

Imagine getting your hands on an unopened letter sent to a relative almost 200 years ago. What secrets might it reveal, what family history mysteries might suddenly unravel as you read it?! There is nothing quite as tantalising as an unopened letter.

If you’ve ever searched for an ancestor on Trove, you might have come across a notice in a newspaper about an unclaimed letter waiting for them at a post office. 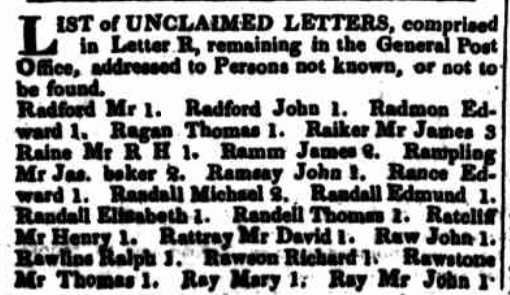 Notices about unclaimed letters began appearing with regularity in newspapers from the 1820’s onwards.

We receive the occasional enquiry from curious researchers wondering what happened to these letters, and the answer to this very question can also be found in Trove!

In the year 1852, there were estimated to be some seventy-two thousand letters lying unclaimed in the Post Office in Sydney. With the mail piling up, the New South Wales Government made the drastic decision to destroy any unclaimed letters dating from before January 1850.

The letters were opened before being destroyed, and if they contained anything of value (money, family jewels etc.), this become part of the casual revenue of the Crown. 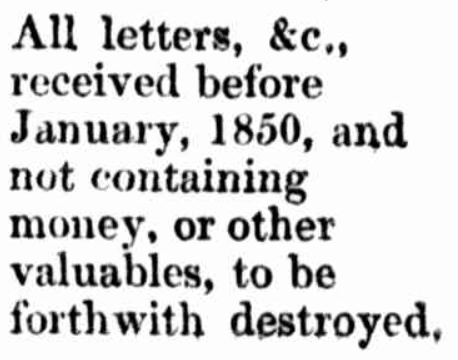 Government gazettes, such as those on Trove, often contain fascinating information about laws and regulations that had a very real impact on the lives of our ancestors.

Further changes to Post Office laws established clear timeframes dictating how long unclaimed letters were to be kept before being destroyed. You can read more about this in the New South Wales Government Gazette on Trove: http://nla.gov.au/nla.news-article230055911

Although we can’t help you get your hands on a letter to an ancestor, it’s still very interesting to know the history of ‘dead letters’ in Australia, and to be left pondering:

What was in the letter?

How might the contents of it have affected the lives of our ancestors, for better… or worse? 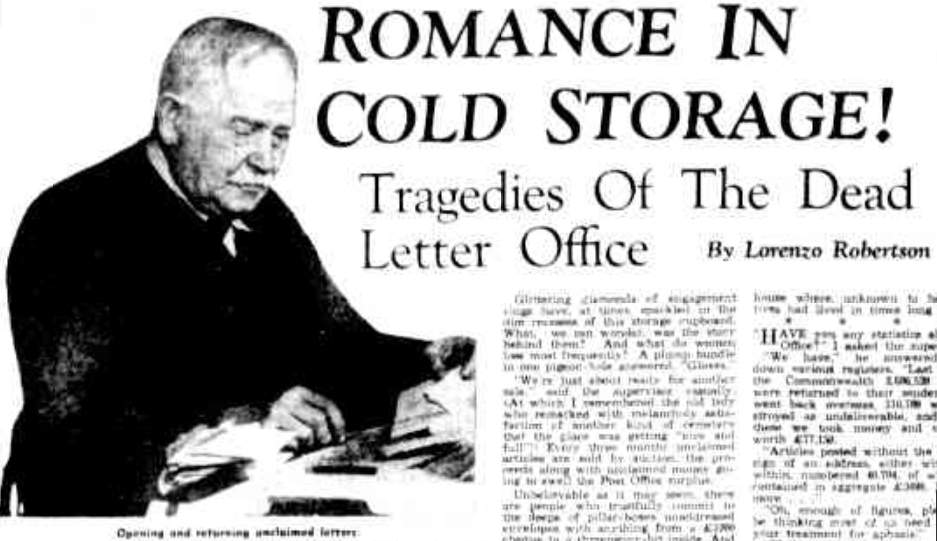 “How many love affairs go astray because of a little carelessness! How many valuables never reach their destination for the same reason! The following article gives us a glimpse behind the scenes at the Dead Letter Office —where many mistakes find a home.”

Sometimes we can't help, but a lot of the time - we can

Every researcher has their brick wall question they’d love answered. Unfortunately, sometimes there’s no answer to be had, or the answer might be a bit disappointing. The joy of family history is piecing together what we can with what the historical record provides – a half painted picture glimpsed through a grime covered window.

But if you are truly stuck, you can always ‘Ask a Librarian’

And if we can’t help, we’ll at least endeavour to explain why.