This page shows example questions received by the Library. Answers were provided by Reader Services staff using the resources in this guide.

Questions may be about Special Gazettes or other gazette series, but the general rules are the same for finding what you need:

How can I get a copy of the government gazette CG S552 about Kakadu National Park Stage 2, published in 1985?

The prefix letters CG S refer to the Commonwealth Government Special Gazette. The index for Special Gazettes does not give the exact date, only the gazette number, however numbering begins each year with 1, so we know that S552 should be in the later part of the year.

In this case, a search of the Federal Register of Legislation shows a later proclamation which refers to S 552, so we do not have to search the full gazette to find the correct reference: Gazette No. S 552 of 20 December 1985.

Most Special Gazette issues are bound with the Commonwealth of Australia Gazette, in date order. The Library Catalogue record shows that dates between 1977 and 2010 are available.

We can use Copies Direct to order a copy of the page. Special Gazette issues do not have page numbers, so we need to include the exact date as well as the number of the gazette on the order form.

A family story says that my great great grandfather held two miner's rights for Young in January 1881 and Peak Hill in December 1899. How can I confirm this story?

The NSW Government Gazette published mining notices; we can consult the microfilm copy of the gazette.

The mining notices include mineral leases approved, abandoned, refused, cancelled etc. Each lease issued is listed, with the name of the person(s) involved and the locality, including the parish.
To see these records, request the microfilm and view it in the Newspapers and Family History zone of the Library's Main Reading Room.

I am researching the mail Contractors of Gippsland and the Mornington Peninsula. How can I access information about the contracts from the 1902 Commonwealth of Australia gazettes?

We can find the Commonwealth of Australia Gazette for the year 1902 on microfilm; it is not available online.
The microfilm has an index for the gazette at the end of the reel. Mail contracts are not listed as an index entry, but under 'Postmaster General's Department' there is the following note:

Mail and other contracts - see under name of contractors.

This means that we need to scan the index to find names of mail contractors. However, there is another index for mail contractors, published in 1994 by John F. Waghron: Alphabetical index of Victoria's mail contractors from 1901 to 1939, showing the locality of their mail run, and the period they held contracts. This is available in two libraries in Victoria.

A gazette is a newspaper. Gazette came to be used for an official government paper with the creation of the London Gazette, first published in 1665 under the title of The Oxford Gazette.

A gazetteer is a geographical dictionary or directory, giving feature identification and geographic and/or grid coordinates. 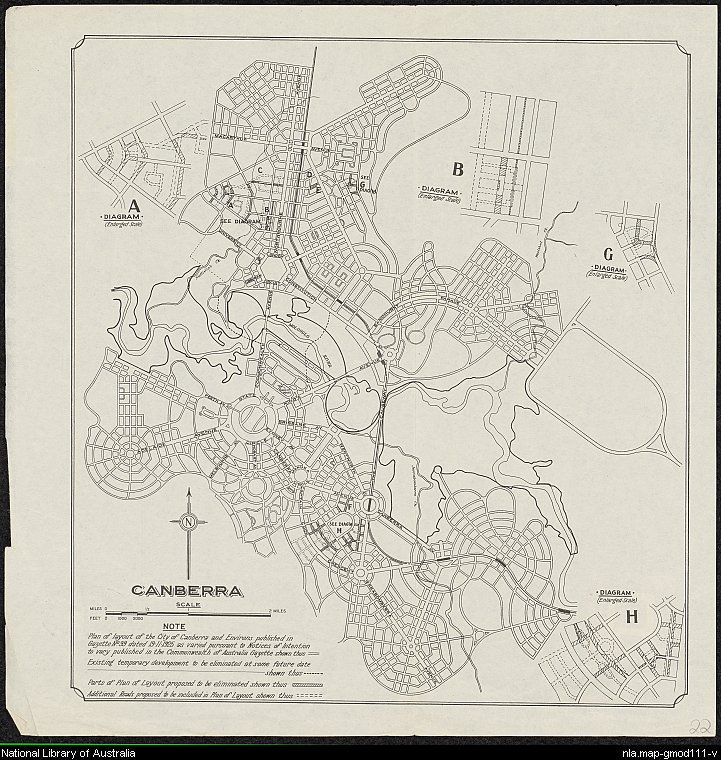 Australia. Federal Capital Commission. Canberra: plan of layout of the city of Canberra and environs published in Gazette No. 99 dated 19-11-1925 as varied pursuant to Notices of Intention to vary. 1925.
Charles Daley Special Col./22.
Maps Collection: http://nla.gov.au/nla.obj-230055014/