The National Library has complete holdings of treaties which were registered with the Secretariat from 1920 to 1946, see the Treaty Series. Use the World Treaty Index to identify the correct volume.

Most League of Nations documents may be identified by one or all of the following numbers:

Use the Finding Aids listed on the previous page to help find documents in the relevant subject area.

Retrieval of a document located in a Catalogue of publications

There are two copies that can be retrieved from the stacks. They are as follows:

Official number: These numbers are found in the upper right corner of the first page of a publication. They cover Assembly, Council documents and Circular Letters send out from the Secretariat to one or more of the Member States of the League.

For example, see Committee for the International Repression of Terrorism. Report Adopted by the Committee on April 26th, 1937. Geneva, 1937, 13p

When requesting the item, fill in the year (1937) and Number (162) in the relevant fields in the online request form.

If you only have the sales number, when requesting the item through the Catalogue at League of Nations papers, request the year (1937) and specify Document number V1.

The document will be delivered in a bound volume (pictured). Volumes also include indexes. 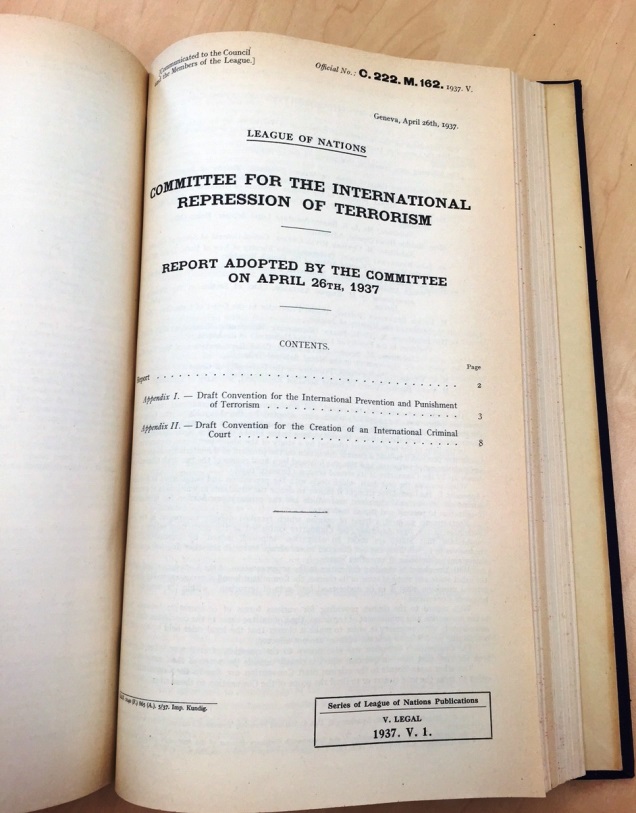 I am looking for a recommendation of the Assembly of the League of Nations 10 October 1932 concerning the return of objects of national artistic heritage after theft or illegal export found in another country.

We can use the online finding aid at Gale Primary Sources - Media Guide, selecting League of Nations Documents and Serial Publications, 1919-1946. To search for a particular document, it is best to download the reel or author index. In this case, we can do a text search for “works of art” using either index. This gives the League of Nations title:

Preservation of Historical Monuments and Works of Art.

Additional Information: C.L.176.1932.XII[A]: Form ltr. by the SG, forwarding an Assembly resolution, Oct. 10, concerning the transmission to governments by the Committee on Intellectual Cooperation of the recommendations drawn up by the Athens Conference concerning the preservation of historical monuments and works of art.

The note in this entry confirms that we are looking for an Assembly resolution, so we can go to the National Library Catalogue record for Records of the ... ordinary session of the Assembly. Meetings of the Committees; we need to request the year 1932. The resolution is also noted in the index under ‘Arts and Letters’ and is repeated in Committee meetings and Plenary Meetings.

"Preservation of Historical Monuments
(11) The Assembly
Approving the resolution adopted by the International Committee on Intellectual Co-operation and acceding to the latter's request that it should communicate to the Members of the League the Recommendations drawn up by the Athens Conference concerning the preservation of historical monuments and works of art :
Entrusts to the Organisation for Intellectual Co-operation the task of transmitting the said recommendations to the Governments on its behalf."

The index of the records also lists Committee sessions where the resolution was discussed. Portrait of Percy Deane, Secretary of the Department of Prime Minister and Cabinet

Percival Edgar Deane (1890-1946) was appointed as private secretary to Prime Minister Hughes in 1916. He was a member of and secretary to the Australian delegation to the Versailles peace Conference. 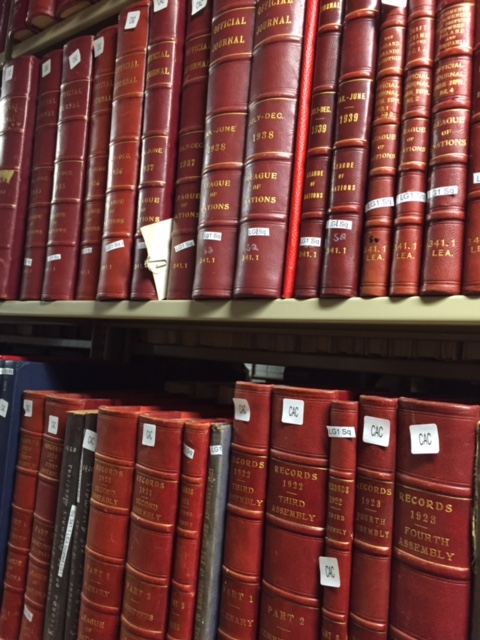 Readers who do not know the official number or sales number of the document, please contact our Ask a Librarian service for assistance.