The National Library holds mapping not only for Australia, but for every country and ocean in the world and also for all the planets. These maps may be standard topographic maps (showing terrain features), or may cover one or more themes, such as tourist information, roads, railways, geology, rainfall, soils, population density etc.

Maps may be produced as:

Series maps may have a single catalogue record for the entire series. To view, or order copies of, series maps, it is usually necessary to specify which sheet(s) of the series you need. The catalogue record will provide this information in one or more of the following ways:

- As a listing of individual sheets, by name and/or number.

- As an index map attached to the record, showing the full extent of the series, indicating in colour which sheets the Library holds, and demonstrating how the sheets are named or numbered.

- Via reference to a printed or online gazetteer

Using these methods, you can then enter the name and/or number of the required sheets into the online request form. Scroll down the catalogue record, select "In the Library" and then "Request this". Make sure you specify in the notes field exactly which map/s you would like to view. 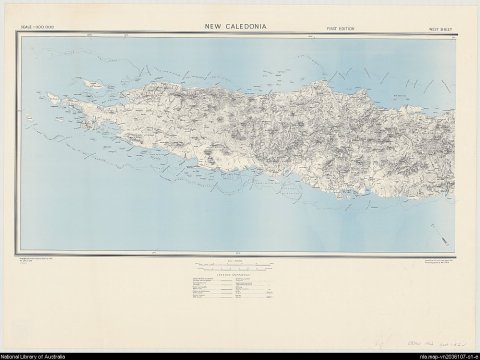 An example of a two-sheet map series.