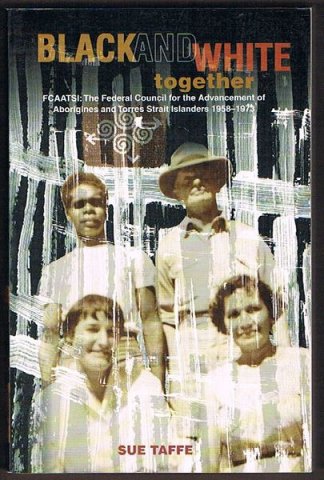 Susan Taffe,  Black and white together FCAATSI : the Federal Council for the Advancement of Aborigines and Torres Strait Islanders 1958-1973 (St Lucia, Qld: University of Queensland Press, 2005)

In the early 1950s, the Australian Government implemented a policy of assimilation. The purpose of assimiliation policies was to incorporate Indigenous people into the wider single Australian community. Organisations like the Federal Council for Aborigines Advancement (FCAA) and the Aboriginal-Australian Fellowship (AAF) rejected the policy stating that Indigenous people would lose ‘their culture and identity’ in the process.

FCAA would later accept the term ‘integration’ instead of assimilation, suggesting that Indigenous people had the right to be included in the mainstream community without it being necessary to lose their culture and social relationships. 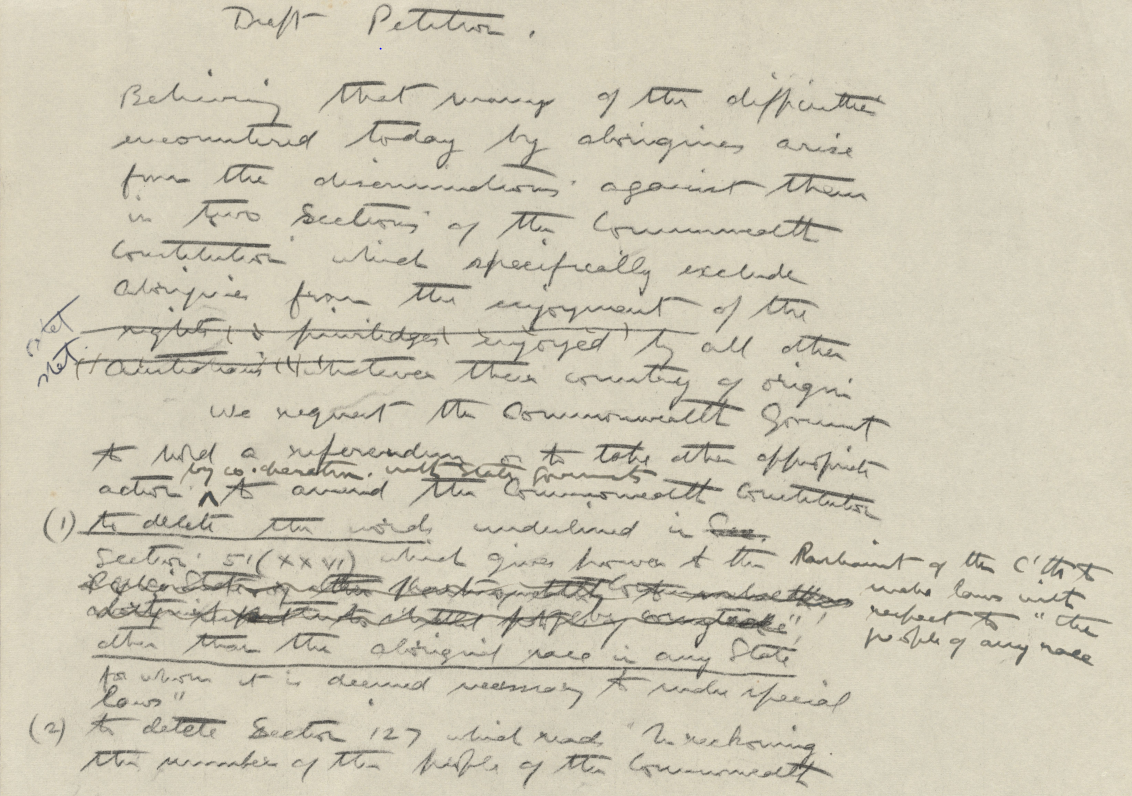 In 1957, a petition campaign was spearheaded by the AAF. The aim of the campaign was to petition for amendments to sections 51 (clause xxvi) and 127 of the Australian Constitution. Members of the fellowship, Faith Bandler and Mrs. Pearl Gibbs worked alongside affiliates Shirley Andrews from Council of Aboriginal Rights (Victoria) as well as leading civil rights campaigner Jessie Street. The petition campaign would prove to be very successful, collecting just over 100,000 signatures. The launch of the Federal Council for the Advancement of Aborigines would soon follow.

The announcement and the campaign

The referendum was announced on 23 February 1967 by Prime Minister, Harold Holt. The 'Yes' campaign received bi-partisan support from the Coalition and Labor with the Prime Minister giving several speeches supporting the campaign. The text of these speeches given by Harold Holt can be found online at PM Transcripts.

The renamed Federal Council for the Advancement of Aborigines and Torres Strait Islanders (FCAATSI) were prominent during the campaign. Also known as the ‘Vote Yes’ campaign it was the longest and most widely supported of the Council's activities.

Collections that can be considered ephemeral in nature may also be found in the Library's collections of pictures and manuscripts which include voting pamphlets, newspaper editorials, leaflets and brochures, handbills, invitations, cards, stickers and badges.

Papers of Gordon Bryant, 1917-1991
MS8256 - FCAATSI, 1964-1975, Series 11, Box 175, Folders 1-3
As a Minister for Aboriginal Affairs (1972-73), Gordon's papers are well documented in this series pertaining to Aboriginal and Torres Strait Islanders. His papers contain reports, newsletters, campaign material, newspaper cuttings, as well as membership forms and other publications relating to the 1967 Referendum.

Papers of John Kempster, 1959-1968
MS Acc14.068 - Box 3
Contains the papers of Dr. John Kempster and his involvement in various organisations for the advancement of Aboriginal Australians civil rights in the lead up to the 1967 Referendum.

Poster for the Yes campaign for the referendum on 27 May, 1967, depicting the face of a child. "Write yes for Aborigines in the lower square May 27th. 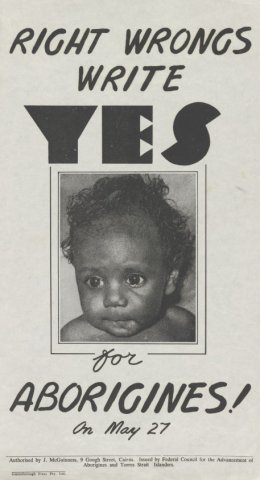 Federal Council for the Advancement of Aborigines and Torres Strait lslander People, Right Wrongs, Write Yes for Aborigines on May 27 from the Papers of Gordon Bryant, 1917-1991 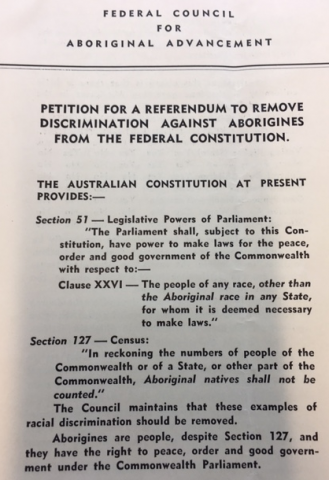 Federal Council for Aboriginal Advancement, Petition for a referendum to remove discrimination against Aborigines from the Federal Constitution from the Papers of Jessie Street circa 1914-1968 - series 6, parts 2-4, Box 28, folder 11.