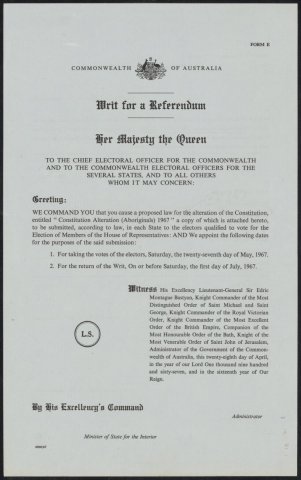 Commonwealth of Australia, Writ for a Referendum - By Her Majesty the Queen for a proposed law for the alteration of the Constitution, entitled "Constitution Alteration (Aboriginals) 1967" from
Referendum, 27 May 1967: ephemera

Can I read newspapers online?

The referendum took place on the 21 May 1967. For a Constitutional change to take effect, a referendum question must be approved by a majority of voters in a majority of Australian states. Two questions were asked:

Question 1: to remove the requirement that the number of members of the House of Representatives must be roughly double the number of senators (not carried); and

The results for question two were overwhelming in favour of change with 90.77 percent of voters affirming support. The vote was also carried in all states making it the most unified response to a referendum question.

Significance of the vote

The significance of the 'Yes' campaign meant that the Commonwealth of Australia could now legislate on behalf of all Aboriginal and Torres Strait Islanders. The Federal Government established the Commonwealth Department of Aboriginal Affairs (now National Indigenous Australians Agency (NIAA)) which would be responsible for all matters pertaining to Aboriginal and Torres Strait Islanders. Charles Perkins was the first Indigenous person to be elected to the position of Department Secretary from 1984-1988.

The right to vote - a common misconception

Papers of Dr. Barry Christophers, 1959-2003
MS 7992 - Boxes 23-27
Papers largely relate to Dr. Barry's involvement with FCAATSI and his interest in indigenous issues, the trust fund campaign and the 1967 Referendum.

Refer to the Library's research guide on Statistics: population and census reports for details on accessing this material in the Library's collection: http://www.nla.gov.au/research-guides/statistics/statistics-population-…

The Library maintains a collection of subject based press clipping files. Press clippings are articles cut out from newspapers and stored in a folder with other articles on the same or similar topic. To request articles, please speak to staff at the desk in the Newspapers and Family History Zone. To request information about the contents of a specific file, please submit an Ask a Librarian enquiry.

For records of all referenda, plebsicites and elections contact the Australian Electoral Comission 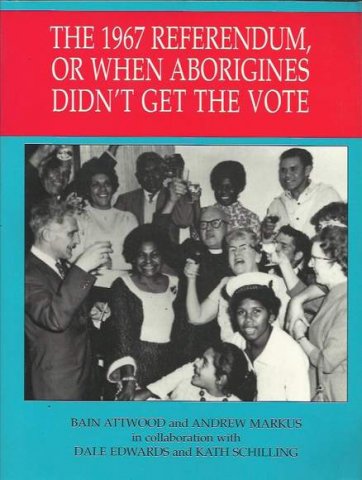