Between 1984 and 1993 Handbooks were published listing records of the Admiralty (Part 7), Colonial Office (Part 2), Dominions Office (Part 10), Foreign Office (Part 5), Home Office (Part 3) and War Office (Part 4). In addition, Part 9 described the personal collections held at the Public Record Office that have been filmed by the AJCP.

In the final few years of the Project, further records of these departments were filmed. Unfortunately, it was not feasible to issue new editions of seven parts of the Handbook to incorporate these additions. Instead, they have been grouped together in Part 11, which completes the publication of the Handbook.

In should be noted that in 2003 the name of the Public Record Office was changed to the National Archives (http://www.nationalarchives.gov.uk/).

A digitised copy of Part 11 of the Handbook is available online.

The following list provides, at Class-level, the additional Public Record Office content contained within the AJCP. Piece Lists and Dates may be found in Part 11 of the Handbook. 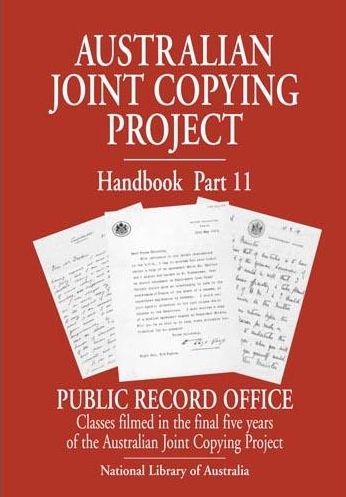